21 Foods To Increase Sex Drive & Libido, According to Science

Increase your sexual power with these stamina-, testosterone-, and libido-boosting superfoods.

Food has long been used to increase sexual desire (hey, a healthy pour of wine never hurt, either), but did you know there are foods that can actually improve your performance? But you don't need to resort to any exotic foods from faraway lands; according to various studies, these common, natural foods will all but ensure you a successful session between the sheets and successfully increase sex drive. You might be surprised to uncover just how many foods can increase the female and male sex drive. (Be sure to avoid these foods that kill your sex drive is an easy step to staying on course!)

Use the following list of foods that increase male and female libido, and while you're adding more to your diet, stock up on The 7 Healthiest Foods to Eat Right Now.

Come to think of it, Popeye and Olive Oyl were always chasing one another around. Eating spinach puts you in the mood for sex by increasing blood flow below the belt. "Spinach is rich in magnesium, a mineral that decreases inflammation in blood vessels, increasing blood flow," explains Cassie Bjork, RD, LD of Healthy Simple Life. "Increased blood flow drives blood to the extremities, which, like Viagra, can increase arousal and make sex more pleasurable," says psychotherapist and sex expert Tammy Nelson, PhD. "Women will find it is easier to have an orgasm, and men will find that erections come more naturally."

Chocolate increases both serotonin and dopamine levels in the brain, making us happy and lowering our stress level—both libido boosters if you know what we mean. Another theory is that cocoa increases blood flow through the arteries and relaxes blood vessels—sending blood to all the right regions. Whatever the reason, chocolate is never a bad thing.

The hotter they are, the better. Hot peppers increase your metabolism and stimulate endorphins, making you sweat, plumping your lips, and speeding up your heart rate. That gets the blood flowing to all the essential areas. The net result? Better sex drive and a more memorable finale. (If you're planning on handling habañeros, however, make sure that you wash your hands before getting near sensitive body parts.)

The secret to a hotter nightlife starts with a hot cup of tea. Green tea is rich in compounds called catechins, which have been shown to blast away belly fat and speed the liver's capacity for turning fat into energy. But that's not all: Catechins also boost desire by promoting blood flow to your nether regions. "Catechins kill off free radicals that damage and inflame blood vessels, increasing their ability to transport blood," says Bjork. "Catechins also cause blood vessel cells to release nitric oxide, which increases the size of the blood vessels, leading to improved blood flow," she explains. Make the most of the benefits from tea with The 7-Day Flat-Belly Tea Cleanse—test panelists lost up to 10 pounds in one week!

Oysters are brimming with zinc, a mineral that elevates testosterone while simultaneously boosting growth factor hormone—both of which enhance muscle growth and physical performance (in and out of the bedroom). Research has also shown deficiencies in zinc to be a risk factor for infertility caused by low testosterone levels.

Not an oyster fan? You're in luck, as Alaskan king crab is another food high in zinc, and zinc has been found to be an essential element for male fertility.

If you like your food like you like your lovers—sweet and spicy—you're in luck. Ginger is another food that can improve your sex life by aiding blood flow and improving artery health. According to a study in the International Journal of Cardiology, consuming a mere teaspoon of the stuff a few times a week is all you need to reap the heart-healthy benefits. So go ahead and place that second order of sushi this week—just don't leave the ginger on your plate.

That Pumpkin Spice Latte may be on your mind first thing in the morning, but before bedtime, getting some sustenance from a real pumpkin might lift your spirits more effectively. In fact, pumpkin seeds can help boost your mood. They're one of the best food sources of an amino acid known as tryptophan, which helps the production of serotonin in your brain. Antidepressants help the brain to circulate serotonin, so if you're taking them now, these little pumpkin pick-me-ups may make them even more effective.

Bananas are one of the top sources of potassium, which helps to counteract the effects of foods high in sodium. Salty foods can not only diminish blood flood to the genitals, which can make it more difficult to reach orgasm, but they can also make you bloated. 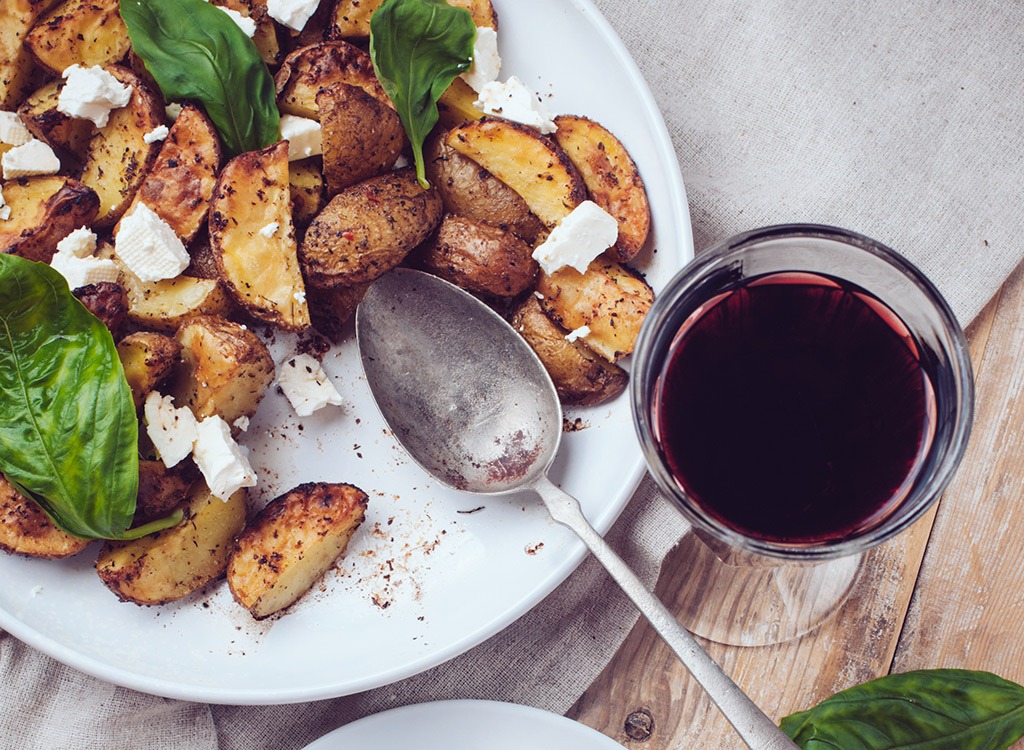 Whether they're the white or the sweet variety, potatoes are a great source of potassium. This nutrient counteracts salt's bloating effects and boosts circulation, which can help you look better in bed and also boost your bedroom pleasure. It can also improve your mood: Studies have linked low potassium levels with depression.

It's no secret that oily coldwater fish like wild salmon, sardines, and tuna are overflowing with omega-3 fatty acids, but here's something you may not know: The nutrient not only benefits your heart but also raises dopamine levels in the brain. This spike in dopamine improves circulation and blood flow, triggering arousal, Bjork and Nelson explain. There's more: "Dopamine will make you feel more relaxed and connected to your partner, which makes sex more fun," adds Nelson. Just make sure you buy the right kind.6254a4d1642c605c54bf1cab17d50f1e

Eat pesto. Pine nuts are full of zinc (like oysters, above!), and people with higher levels of zinc in their system have been shown to have a higher sex drive than those with lower levels.

It turns out all those Starbucks dates may be worthwhile—coffee may just be the best libido booster around. It contains a stimulant that has been shown to put females in the mood, a study in Pharmacology, Biochemistry, and Behavior found. Grab a cappuccino and brace yourself for a long, lucky night.

Additional herbs and drinks to naturally boost female sex drive that might be helpful:

If you're looking for a way to simultaneously boost your libido and calm those pre-date jitters, pour yourself a glass of red. Women who drank one to two glasses had heightened sexual desire compared to ladies who didn't down any vino, a Journal of Sexual Medicine study found. (Just be sure to cut yourself off after your second glass; enjoying more than that didn't stimulate any further arousal, and knocking back too much can stop the show before it starts.) What makes the elixir so beneficial is a rich antioxidant profile that triggers nitric oxide production in the blood, which relaxes artery walls. As with many of the foods on this list, that increases blood flow down south.

If your crazy-busy schedule is to blame for your lack of libido, you're not alone. "One of the primary reasons couples stop having sex is because they're tired, fatigued, and stressed. But sometimes, there's a biological component at play," says Nelson. One of the causes of fatigue in women is iron deficiency. The condition can sap energy, and can result in a low sex drive, explains Nelson. Bjork concurs, adding, "Iron deficiency is common and can result in feelings of exhaustion, weakness, and irritability, which doesn't make anyone feel like getting intimate." Because red meat is full of iron, it's deemed one of our foods that increase libido.

A recent study published in the International Journal of Impotence Research and performed at the Male Clinic in Beverly Hills (yes, they're both real!) found that pomegranate juice, such as POM Wonderful, had a positive effect on erectile dysfunction and male sexuality. This viagra food has been linked to antioxidants that support blood flow. Just be sure to water your juice down a bit: One cup of POM Wonderful has 34 grams of sugar.

Wind down your date with watermelon. Watermelon has even more lycopene than tomatoes, and lycopene rivals Viagra in its ability to relax blood vessels and improve circulation to certain, ahem, areas of the body. 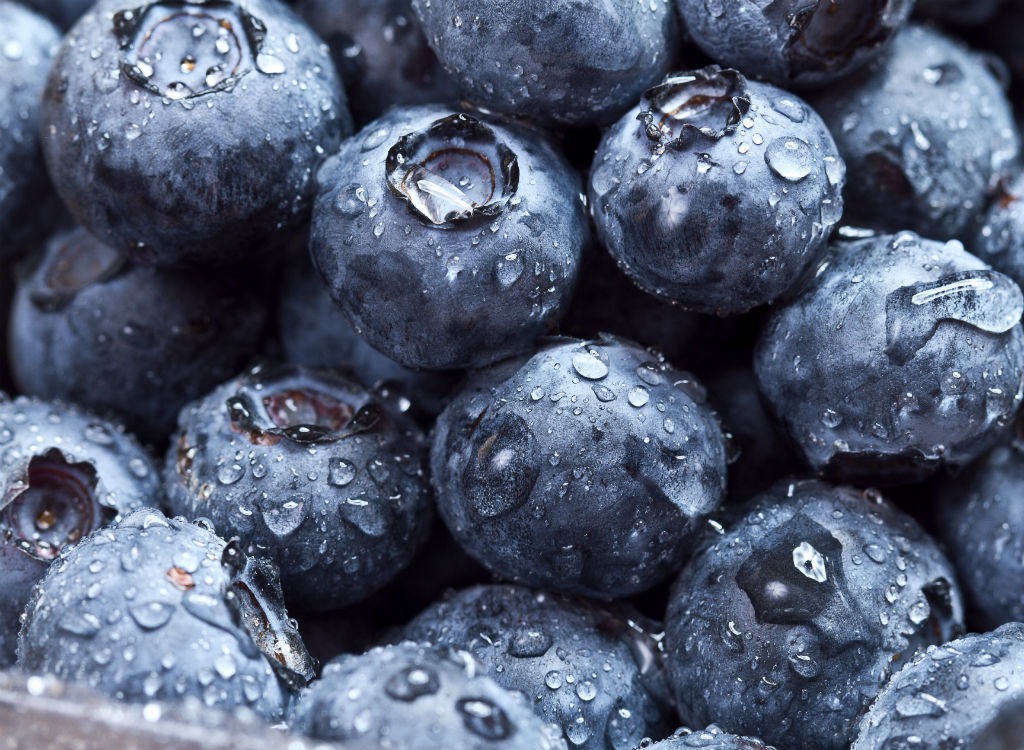 Blueberries make things harder, but in a good way. According to a joint study from the University of East Anglia and Harvard University, eating flavonoid-rich foods is associated with a reduced risk of erectile dysfunction. Of the six main types of flavonoids, three in particular—anthocyanins (found in blueberries), flavanones, and flavones (both found in citrus fruits)—offer the greatest benefits in preventing erectile dysfunction.

Here's how nuts can boost sexual stamina and sexual desire: Pistachios, peanuts, and walnuts all contain the amino acid L-arginine, which is one of the building blocks of nitric oxide—a naturally-occurring gas that helps guys maintain their erections. Plus, nuts also help reduce cholesterol levels. The less cholesterol you have in your system, the easier it is for blood to circulate throughout your body, which can help you maintain a firmer erection longer. Stay hard and lose your belly with these killer snack foods for weight loss.

According to historians, ancient Egyptians used garlic to boost their sex drive and stamina. While they didn't have modern-day science to confirm that it actually worked, they were most certainly onto something. Researchers have confirmed that consuming the plant helps stop the formation of new fatty deposits, called nanoplaques, inside arterial walls. Yes, that includes the arteries leading to your penis, too. Keep your heart healthy and your erections strong by adding some of the kitchen staples to your weekly dishes. But bear in mind that garlic won't make your breath smell particularly seductive, so keep it out of your date-night diet.

If you want to go long enough to help your date reach the big-O, reach for some oatmeal. The popular breakfast cereal is a good source of l-arginine, an amino acid commonly used to treat erectile dysfunction. Plus, whole grains like oatmeal also help lower cholesterol levels. Having high cholesterol can lead to atherosclerosis, a condition that clogs and narrows arteries, impairing blood flow. This could eventually lead to heart problems, but you'll likely notice issues below the belt first. The arteries surrounding the genital area are narrower than coronary blood vessels, so they're more susceptible to clots. Simply put, the better your cholesterol levels are, the better your erection will be, too.

Eat This, Not That!
Inspired by The New York Times best-selling book series, Eat This, Not That! is a brand that's comprised of an award-winning team of journalists and board-certified experts, doctors, nutritionists, chefs, personal trainers, and dietitians who work together to bring you accurate, timely, informative, and actionable content on food, nutrition, dieting, weight loss, health, wellness, and more. Read more about Eat This
Filed Under
Erectile Dysfunction // Healthy Foods // Sex // Sex Drive