What the Heck Is a Margarita Burn?

"Can I get a margarita on the rocks with a touch of phytophotodermatitis?" said no one ever. Whether you indulge on Margarita Monday, Tequila Tuesday, or Thirsty Thursday, we have some scary intel on your favorite summer cocktail that you don't want to miss…

We all know that drinking comes with a host of side effects. The pounding headaches, nausea, and dehydration—we basically sign up for it all in exchange for a few hours of fun. But would you still indulge if your skin broke out in a bumpy, red rash that burns, itches, and blisters? If we had to guess, probably not.

Even though alcohol is on our list for 50 Little Things Making You Fatter and Fatter, summer just wouldn't be complete without enjoying a cold margarita in the sun. There's something about the citrus cocktail that's just right for a hot summer day; it's like lemonade for adults. However, margaritas and warm weather might not go together as well as many people assume. Every year, fans of the drink are admitted to the hospital for something called phytophotodermatitis—otherwise known as bartender's disease, margarita burn, or "lime" disease (not to be confused with the more serious lyme disease). The margarita-influenced condition, which is a result skin exposure to citrus fruit and subsequent sunlight, manifests itself on the skin as a streaky, red, blistering rash that often burns and itches. If you just scoffed and thought to yourself, "this probably rarely happens," keep reading.

"I am very familiar with phytophotodermatitis and see many versions during the summer from a variety of fruity beverages," New York City-based dermatologist, Dr. Francesca Fusco, tells us. "It is a rash or skin eruption that occurs when the skin has been exposed to certain plants and then sunlight. The most common culprits include citrus fruits, celery, figs, and parsnip. After exposure, the condition typically takes 24 to 72 hours to appear." 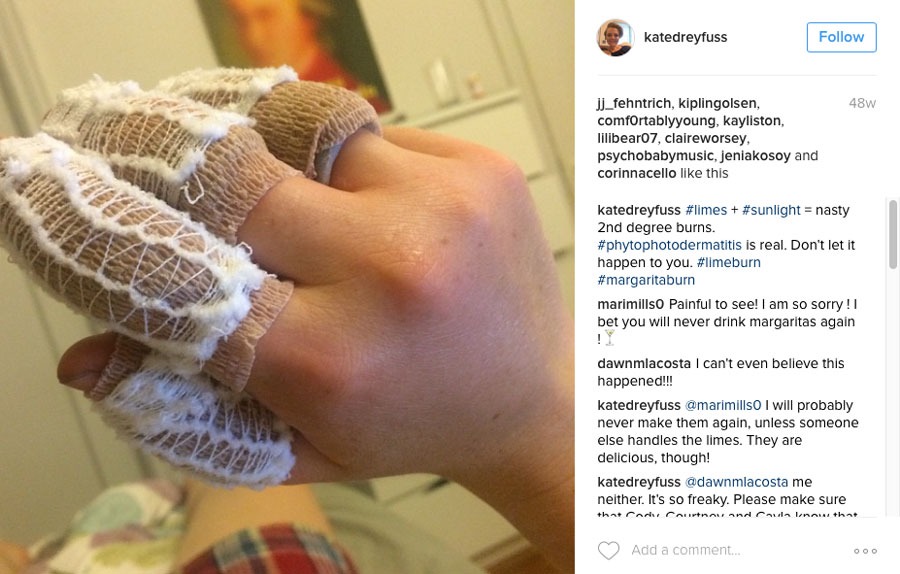 Dr. Fusco went on to tell us two stories about drinking-related phytophotodermatitis. In one incident, a female patient was taking tequila shots in the classic fashion by holding a lime between her fingers and licking salt off her hand. The citrus dripping from the lime as well as the citrus on her tongue combined with the sunlight caused the girl to break out with the rash on the back of her hand that appeared as a "streaky, reddish brown patch of skin." In another incident, a male patient had wide, red strips of rash down his legs that itched and burned. After speaking with him, Dr. Fusco came to the conclusion that the rash was a result of a drink spilling on the lounge chair he had been sitting on "after a food fight that had included lime."

RELATED: 25 Healthy Foods That Give You Glowing Skin

While you might chuckle at these stories thinking back to your own moments of drinking debauchery, the rash is actually pretty serious. Treatment regimens include steroids, wound dressings, and a long healing time that usually results in scarring. This is quite the price to pay for a bit of imbibing! So, next time you're getting a little vitamin D, skip the vitamin C and order a drink that's citrus-free. Or, if you really can't give up your precious marg, be sure to wear sunscreen (don't forget to put it on your paws and arms!) and wash your hands after sipping. In this case, a little bit of effort could be well worth it.