7 Secret Hacks to Pick the Perfect Meat Every Time

Think outside the box!

You know the routine. You head to the store, pick up a pack of fresh chicken breasts and some sides to go with it, and move on. But if you're just grabbing the first package of meat you see (and grabbing the same meats every time), you may not be getting the most out of your meals.

Here are seven meat buying hacks everyone should know before heading to the grocery store. You just might see the meat section in a whole new light.

Pay attention to the smell

You shouldn't be able to smell raw chicken on the shelf at the store. An overwhelming smell emanating from the packaging could be a sign that a chicken breast pack is starting to spoil.

"Raw chicken that has gone bad has a very potent odor. Sometimes it can be described as a sour smell. If the chicken has taken on an odor of any sort, it's safest to toss it," Claudia Sidoti, head chef at HelloFresh, previously told Eat This, Not That!

Check the color of your chicken 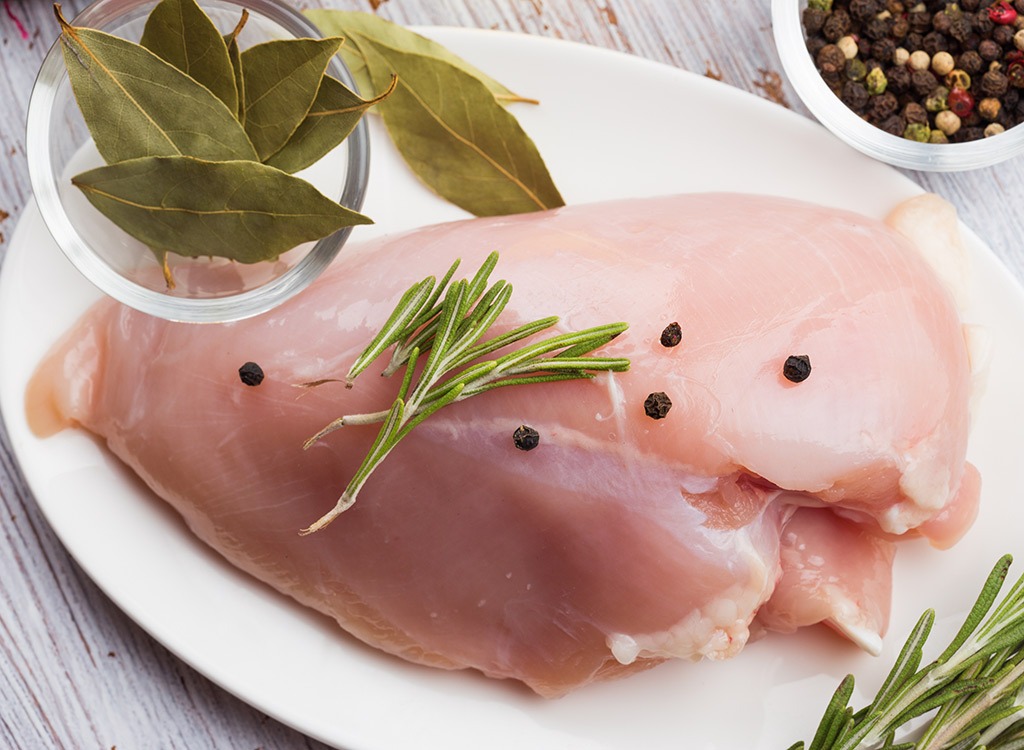 In addition to smell, raw chicken that's gone bad might appear gray, rather than pink. "Fresh, raw chicken should have a pink, fleshy color. As it starts to go bad, the color fades to a shade of grey. If the color starts to look duller, you should use it immediately," Sidoti previously told Eat This, Not That!

Grass-fed beef is higher in omega-3 fatty acids than conventional beef is. So if you have the means, splurge on the grass-fed options.

Eating meat is one of the easiest ways to add protein to your diet. But not all animals are equal! If you don't regularly eat turkey breast, give it a try (and not just on Thanksgiving!). Turkey breasts contain more protein than steak and chicken breasts.

Yes, chicken thighs have more fat than chicken breasts. But that fat will also impart a delicious flavor as the chicken cooks, meaning you'll have a more satisfying meal. And cooking chicken thighs at home is still a lot healthier than, say, grabbing fried chicken from a restaurant. So if your dinner rotation seems to include chicken breasts every time, don't be afraid to go for the dark meat next time you're shopping.

Think outside your normal go-to's

Ground beef and chicken breasts are great, but they're far from the only meat options out there! Bison, for example, is leaner than beef and is a good source of zinc and iron. Plus, it will give your homemade burgers a new flavor than what you'd get from ground beef.

Don't be afraid of frozen meat

Frozen meat (and vegetables!) can be just as delicious as its fresh counterparts, and you won't have to worry about it going bad in the fridge. "Most meat that you see in the grocery stores was previously frozen," nutrition expert Katie Boyd, M.S., previously told Eat This, Not That! "It actually makes life more convenient." And who doesn't need a little convenience now and then?

Meghan De Maria
Meghan De Maria is a senior editor at Eat This, Not That!, specializing in food, product, and restaurant coverage. Read more
Filed Under
Groceries // Shopping Tips // Tips