Eat This! has got the scoop on which male actors endured rapid weight loss and rapid weight gain for roles in some of your favorite flicks.

When we recently heard about how Mark-Paul Gosselaar (aka Zack Morris to many of you) had to gain nearly 20 pounds in barely six weeks for his role as a baseball player/catcher in Fox's Pitch, it got us thinking about all the other men who have had to sacrifice their body's comfort zones for the sake of their careers. Unlike most civilians' jobs, actors not only have to be incredibly talented in their respective field, they also have to be willing to warp their appearance if a role calls for it. Read on to see which guys gained or lost several pounds to portray their characters—and then don't miss our definitive list of the 50 Best Ever Foods for Men! 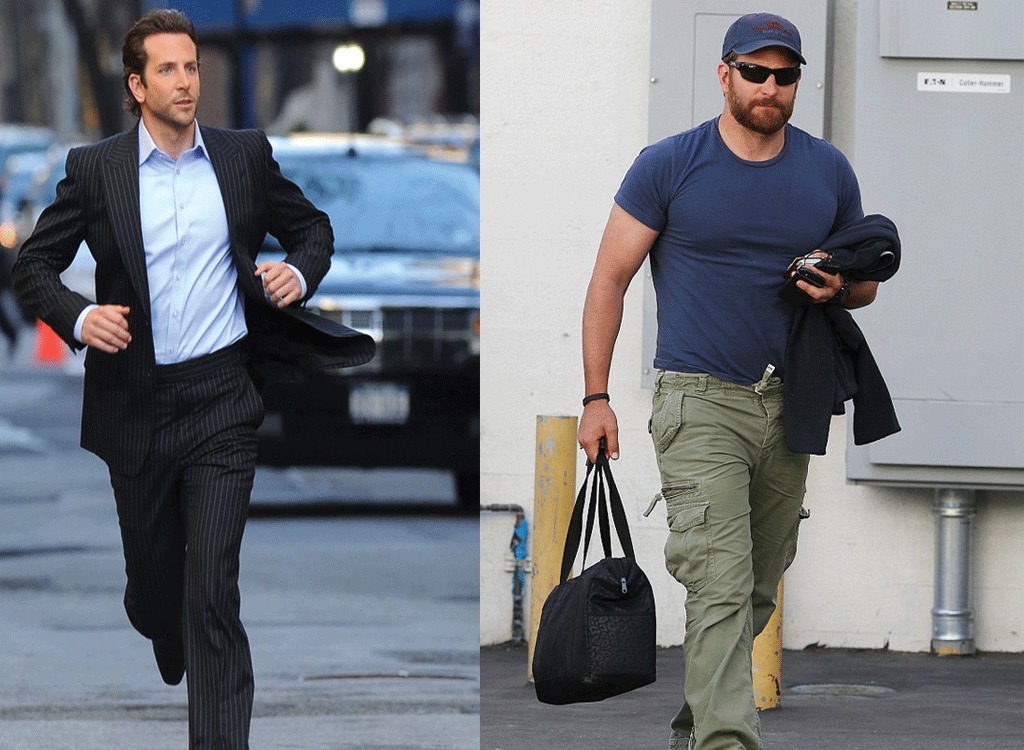 "Dang, Bradley Cooper has put on a lot of weight."

I remember thinking this when Bradley Cooper makes his first appearance in the film American Sniper. And I, along with others I am sure, were not wrong with that observation! The actor gained an impressive 40 pounds in just 10 weeks to play the burly Chris Kyle. This Navy SEAL, who's known for his record of 160 confirmed kills in Iraq, was a hearty 230 pounds. Prior to the film, Cooper was 185 pounds—but with the help of celebrity trainer Jason Walsh, he was able to get big in a small amount of time. The actor had to eat nearly 6,000 calories per day to put on that impressive amount of weight. At his peak, Cooper clocked in five sets of eight reps of heavy rack pulls (a type of deadlift exercise) with more than 400 pounds! Shortly after they finished filming, Cooper had to lose 10 pounds in two weeks and then another 20 to play a chef in another film called Burnt. 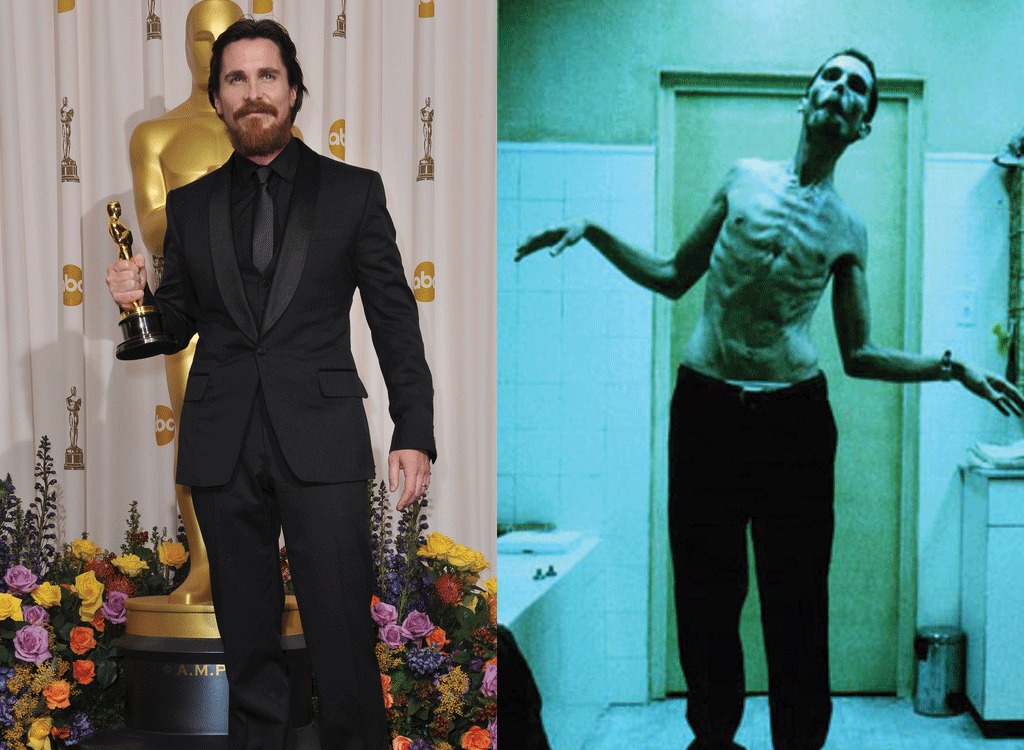 Perhaps one of the most intense—and quite frankly one of the most dangerous—weight loss stunts was performed by Christian Bale for his role as insomniac Trevor Reznik in the The Machinist. Bale lost 63 pounds by running and replenishing with a less-than-adequate meal of an apple and a can of tuna per day. This act of starvation is so incredibly detrimental to your metabolism; and to make matters worse, as soon as he finished filming he put on nearly 100 pounds in the time span of five months to play as Batman in Batman Begins. We understand that Bale was doing it all for his job, but here are 12 Realities of Yo-Yo Dieting You Need to Hear. 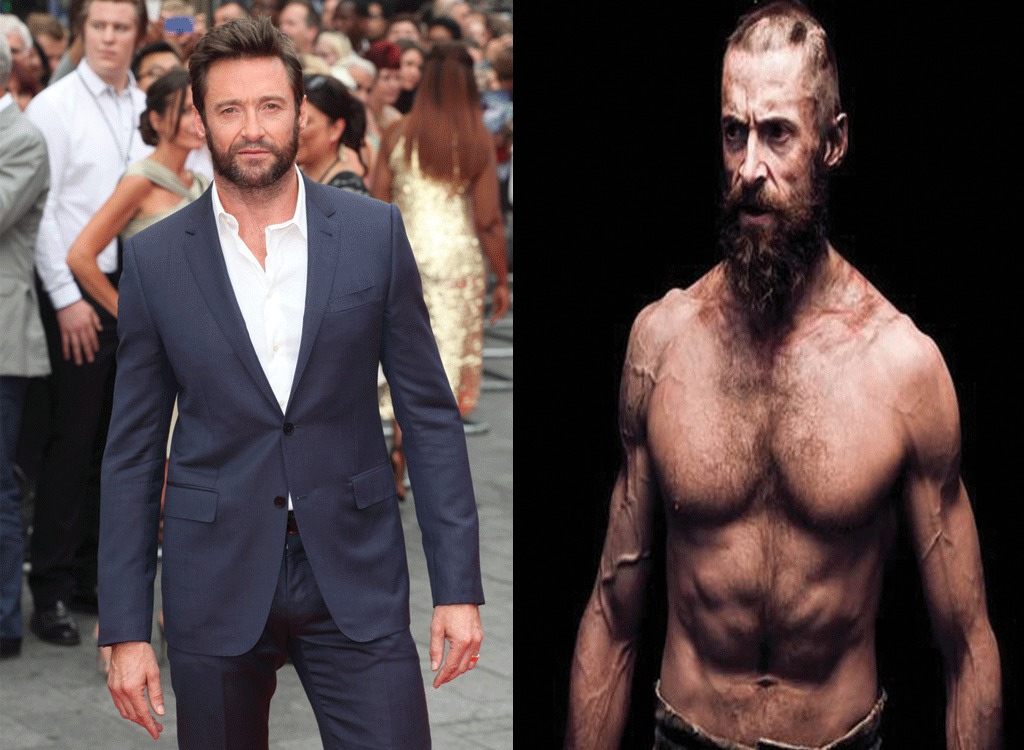 Another actor who extinguished all belly fat was Hugh Jackman for his role in Les Miserables. His training was brutal because Jackman had to maintain a considerable amount of muscle in order to portray the strong, relentless Jean Valjean. In order to achieve this emaciated yet muscular look, he had to eat sparingly seven times a day and do a mix of cardio and strength training for three hours a day. It's no wonder why the actor was accused of being grumpy on set— he was probably hangry! 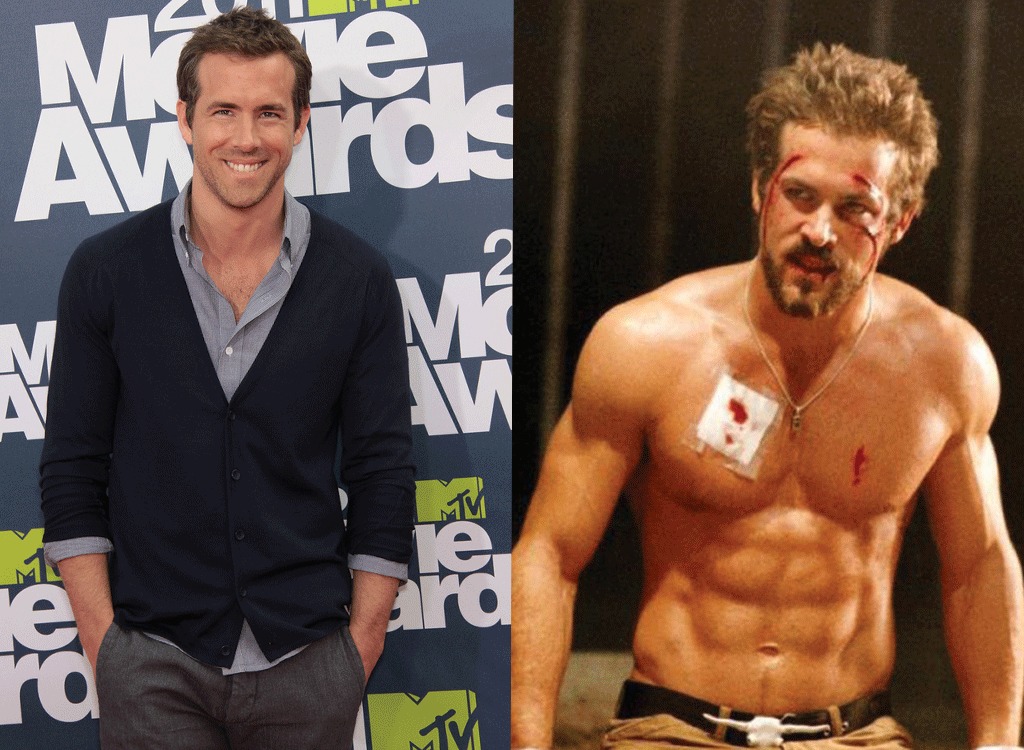 To attain his ripped abdomen in the film Blade: Trinity, Ryan Reynolds had to pack on 25 pounds of pure muscle in just three months. He accomplished this with plenty of training and about 3,200 calories every day. He must have eaten a wealth of high protein snacks throughout the course of the day to maintain that epic muscle gain! 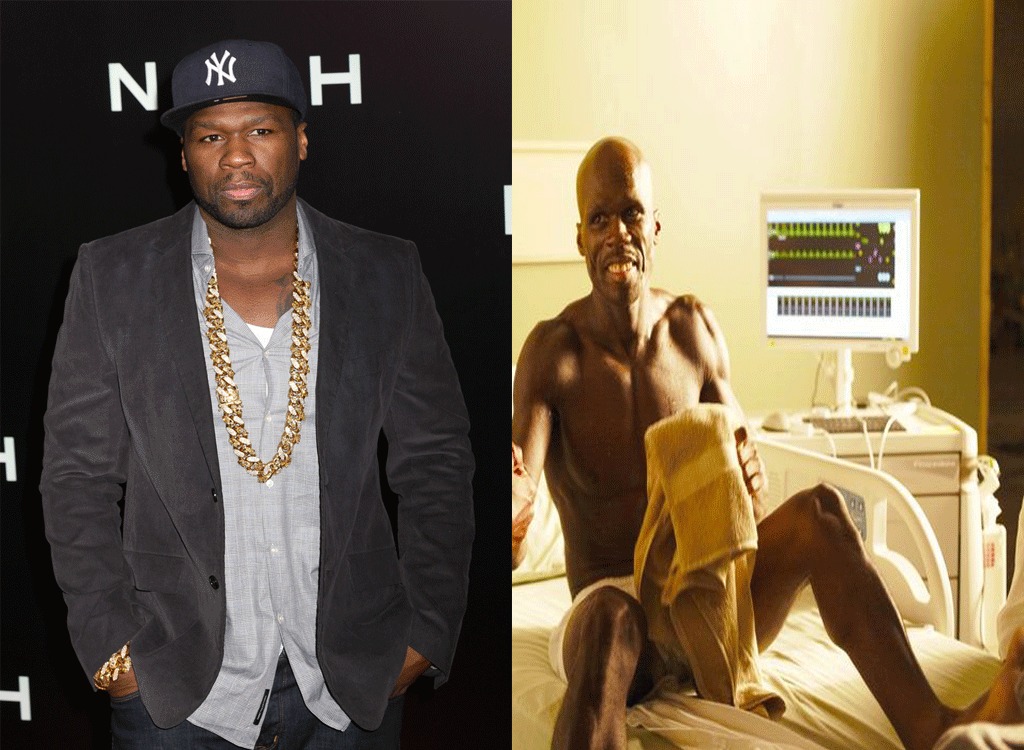 Another drastic weight loss stunt was executed by rapper 50 Cent, who shed 55 pounds for the movie All Things Fall Apart. His role entailed playing a college football player who had been plagued with cancer. To replicate the character's sickly look, he exercised multiple times each day and went on a liquid diet for nine weeks. Yes, nine weeks.

DON'T MISS: 27 Things a Juice Cleanse Does to Your Body 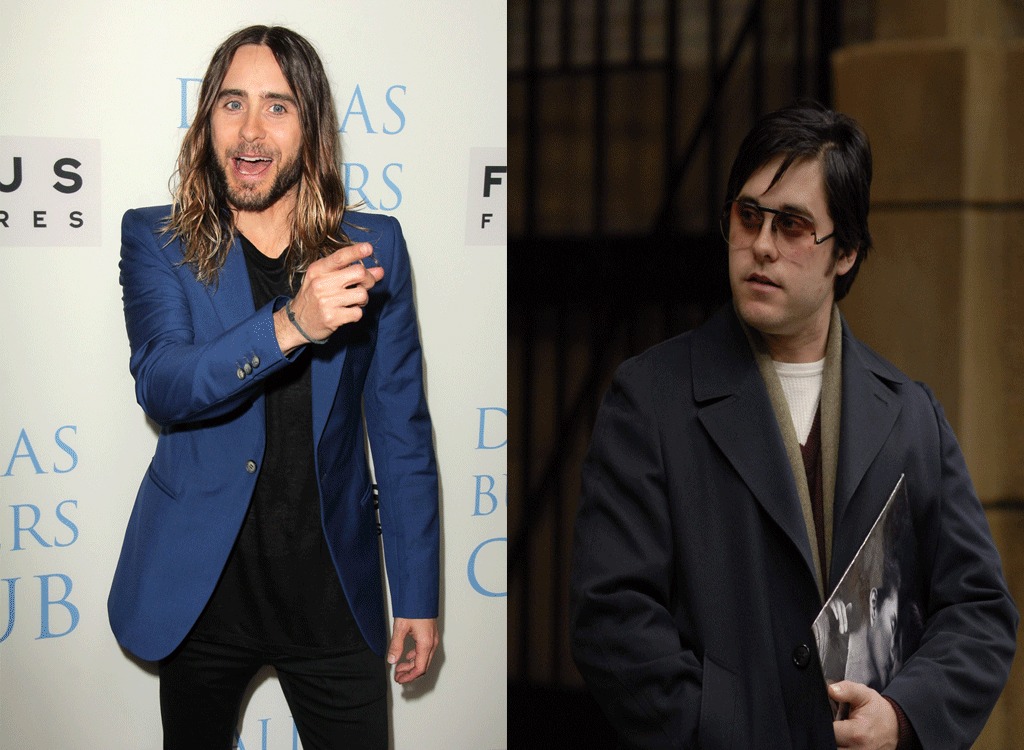 You may recognize him as the frontman in the legendary rock band, 30 Seconds to Mars, but Jared Leto also dabbled with an acting career. In his this role in Chapter 27, Leto gained an impressive 67 pounds by eating a diet rich in extremely high-fat snacks. His favorite? Oh, just your usual microwaved pints of ice cream mixed with soy sauce and olive oil. Yuck! If it wasn't obvious, this is like the extreme version of 40 Bad Habits That Lead to a Fat Belly. Leto gained so much weight so fast and in such an unhealthy manner that he had to get around in a wheelchair because his feet hurt so bad. 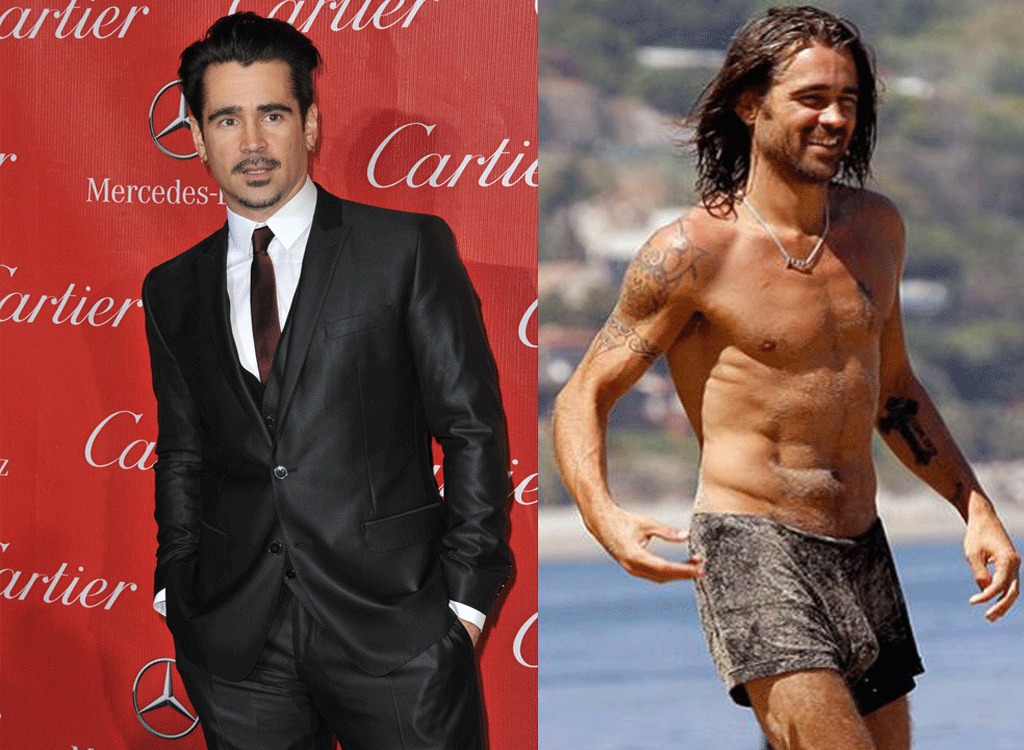 The Irish actor dropped 44 pounds for his role in the movie Triage. In order to master the skeletal look, Farrell survived off of black coffee, Diet Coke, and two cans of tuna per day. Sure, it's a step up from the single can of tuna and apple that Christian Bale was nibbling on—but still, these small rations of food are not exactly doing your body any favors. 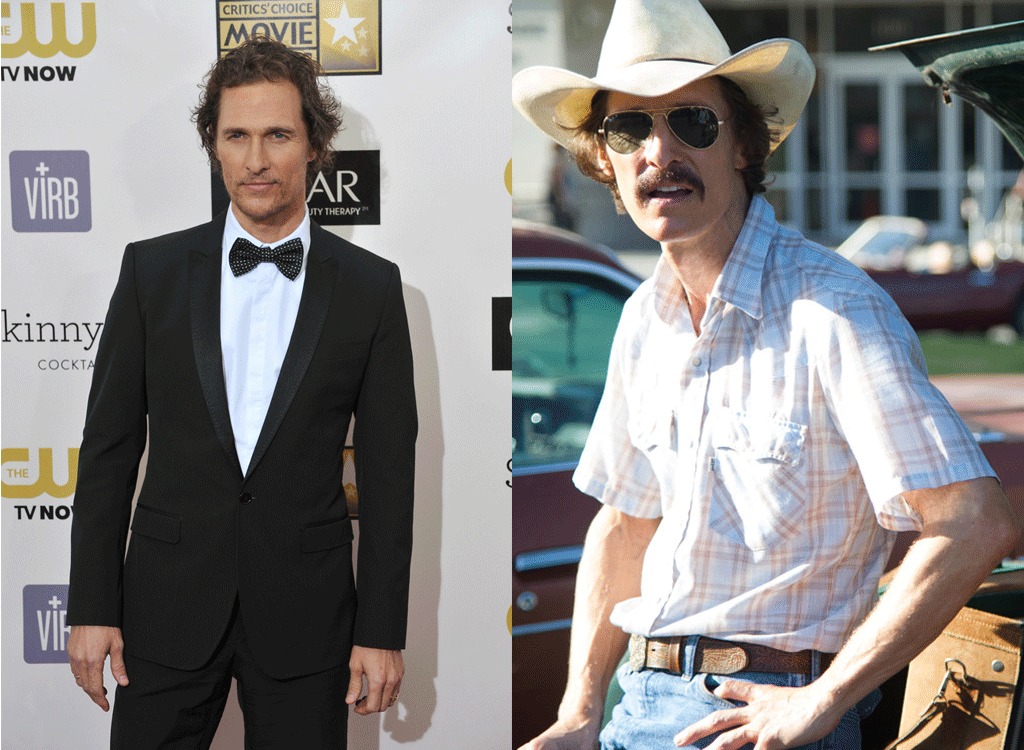 All right all right all right! We all know Matthew McConaughey plays the charmer in most of his films—but did you know he dropped 38 pounds to parallel AIDS sufferer Ron Woodroof in the film Dallas Buyers Club? Records of his diet include egg whites, a bit of chicken, a small serving of pudding, and two Diet Cokes per day for three or four months. Wowza, it's no wonder why he dropped 25 percent of his body weight. 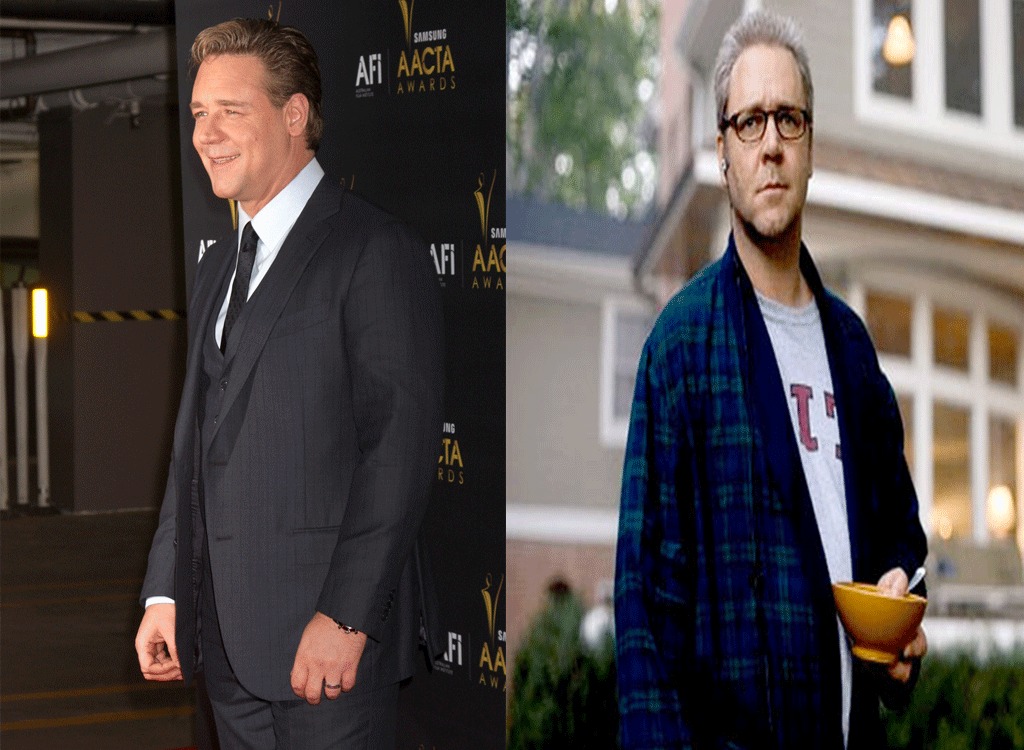 For Russell Crowe's part in the film Body of Lies, he had to gain a whopping 63 pounds! With the help of cheeseburgers for breakfast, cupcakes, and a sedentary lifestyle, he was able to put the weight on in the nick of time. Unfortunately, but to no surprise, his body hated the rapid weight gain and his cholesterol levels spiked into a perilous territory. 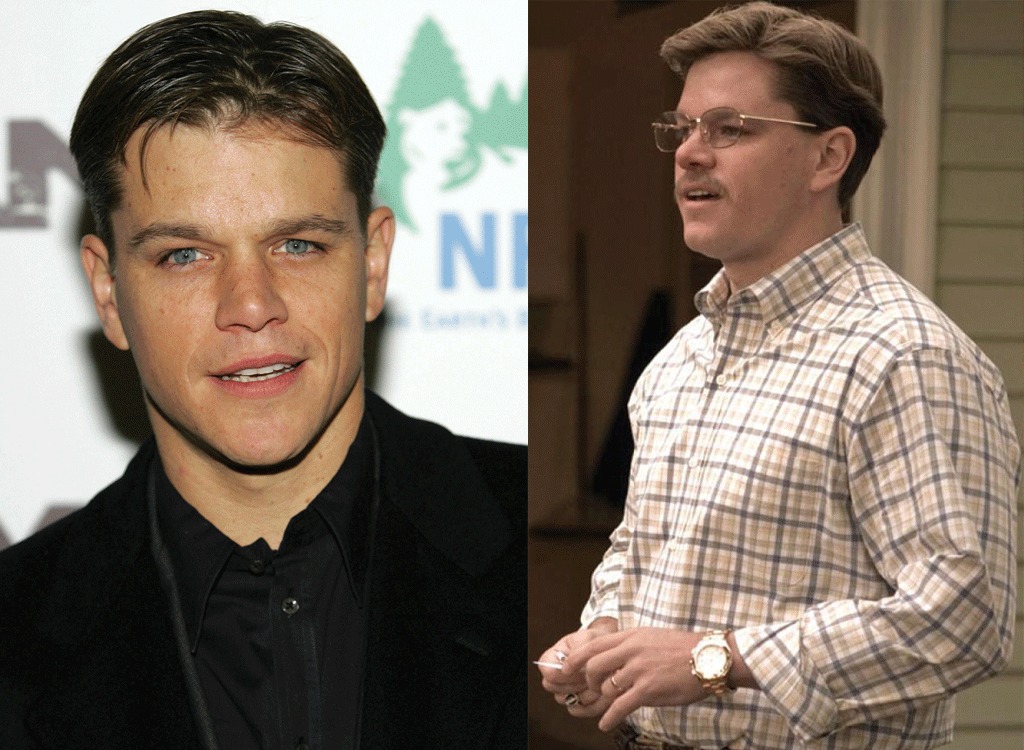 Matt Damon successfully put on 30 pounds for his role in The Informant. The downside? It predominantly went to his gut. Excessive belly fat is more concerning than storing weight in the hips and thighs because that visceral fat is the precursor to a long line of heart disease and even Type II diabetes. Luckily, he shed it by the time he had to waltz down the red carpet! 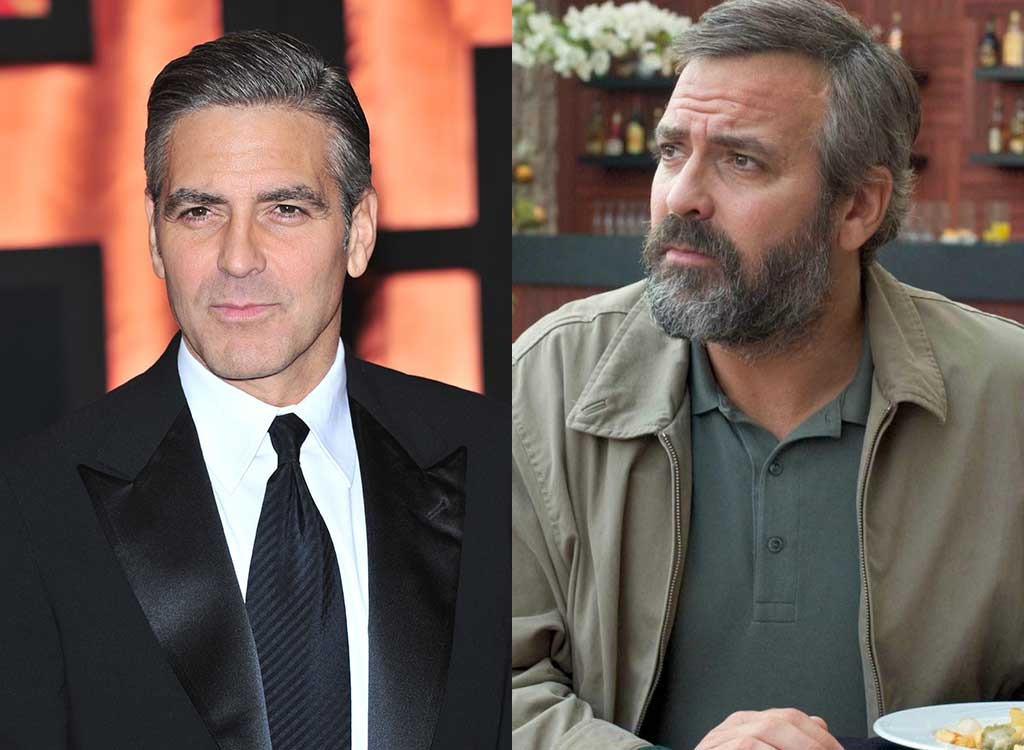 Good ol' George Clooney may have won an Oscar for his role in the political thriller Syriana, but he was not terribly keen on the 35 pounds he had to pack on for it. He claims putting on the pounds—along with the bushy beard—made him feel like he aged a decade. Was that feeling worth an award? You decide. 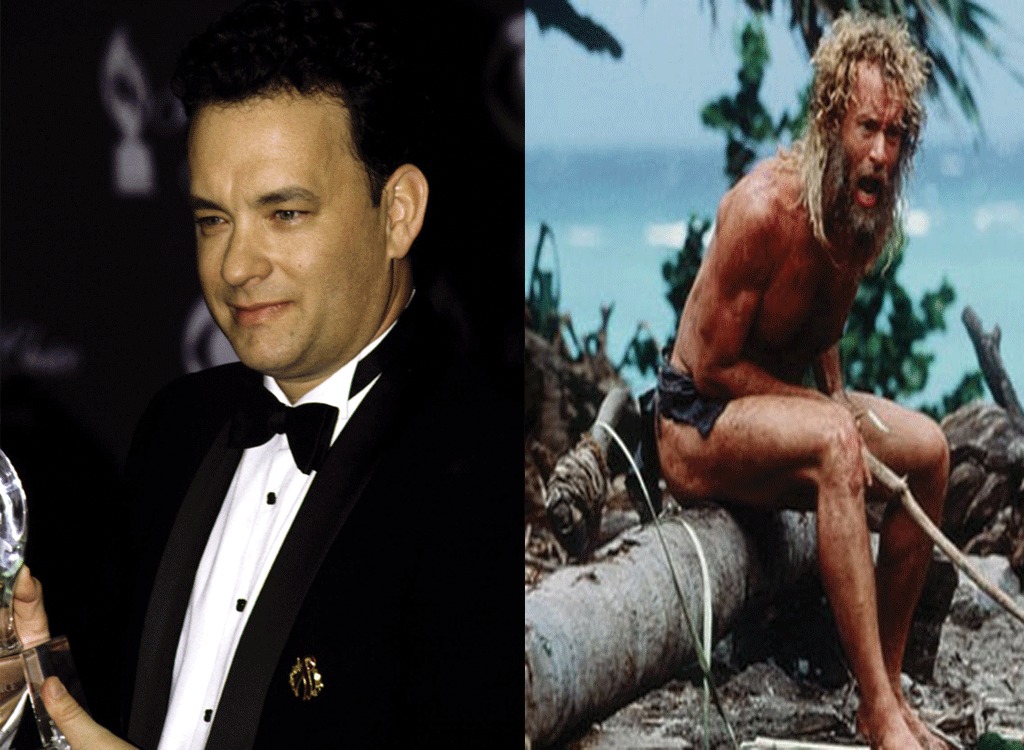 Tom Hanks' most remarkable transformation has to be his 50-pound loss for the classic hit Cast Away. In order to prepare for the film, Hanks took a slower route in comparison to the others listed above and dropped the weight over the course of one year. At the same time, he grew a long beard to enhance the scraggly look. Hanks also lost weight 30 pounds for his role in the movie Philadelphia. He's developed Type II diabetes, which he accredits to his massive jumps in weight over the years for these two films. Depressing? You bet. On a more lighthearted note, read up on 25 Weight Loss Tips From The World's Fittest Men to get a sense on how to lose weight in a healthy manner. 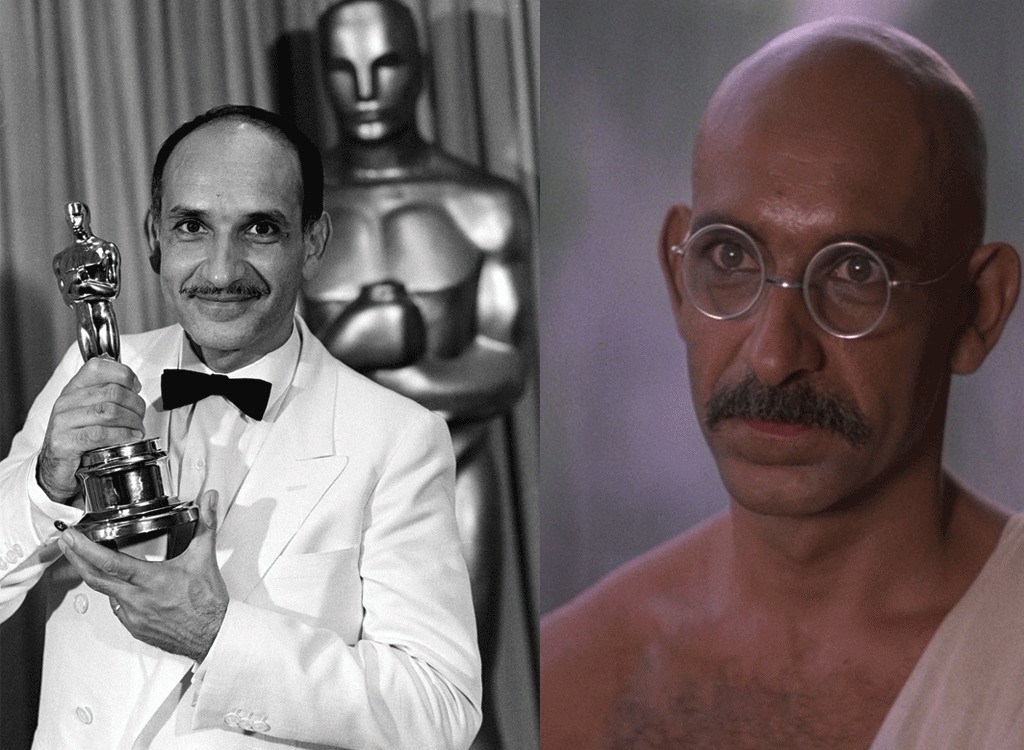 British actor Ben Kingsley dropped 20 pounds to play Gandhi, which aired in 1982. He wanted to fully come in tune with the character, so he even decided to lose the weight on a strictly vegetarian diet—Gandhi style. This guy sure did his research. 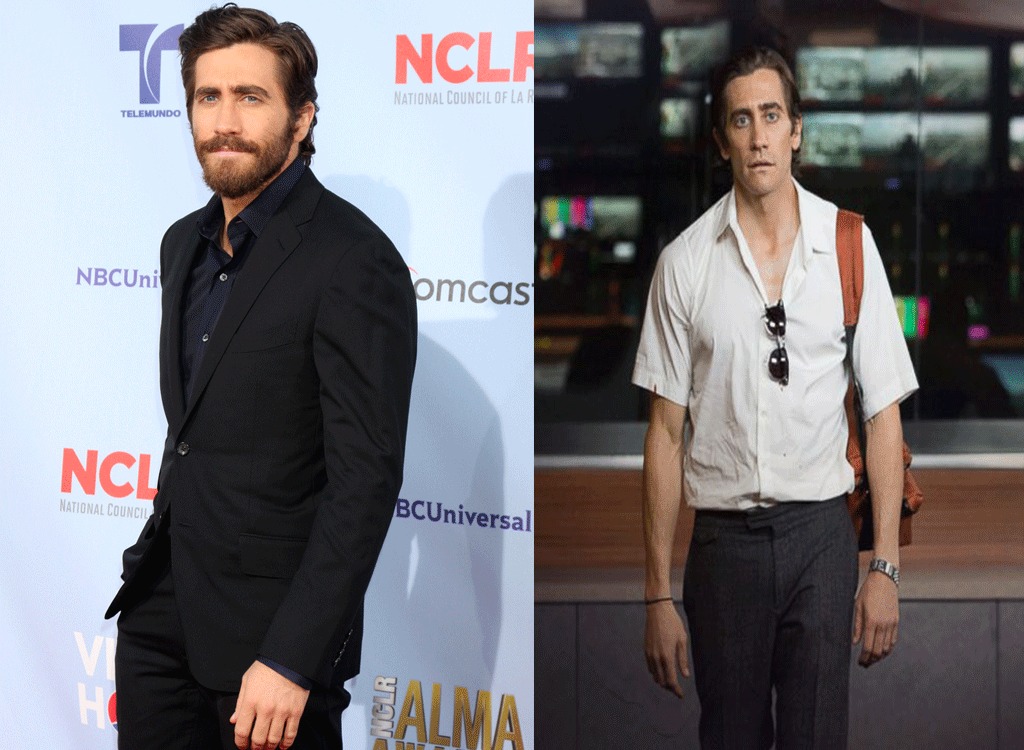 A formerly lean Jake Gyllenhaal dropped an additional 30 pounds to mimic the disturbed freelance crime photographer, Louis Bloom, in Nightcrawler. Gyllenhaal felt as though his character was synonymous to a starving coyote, so he wanted to explore the idea of being hungry and running lots. Cardio is great and all, but too much of it and with little to no strength training can leave you looking a bit emaciated, at least in the most extreme case. Check out 25 Best Foods for a Toned Body so that you can get a solid idea on what foods best replenish your body after an intense workout! 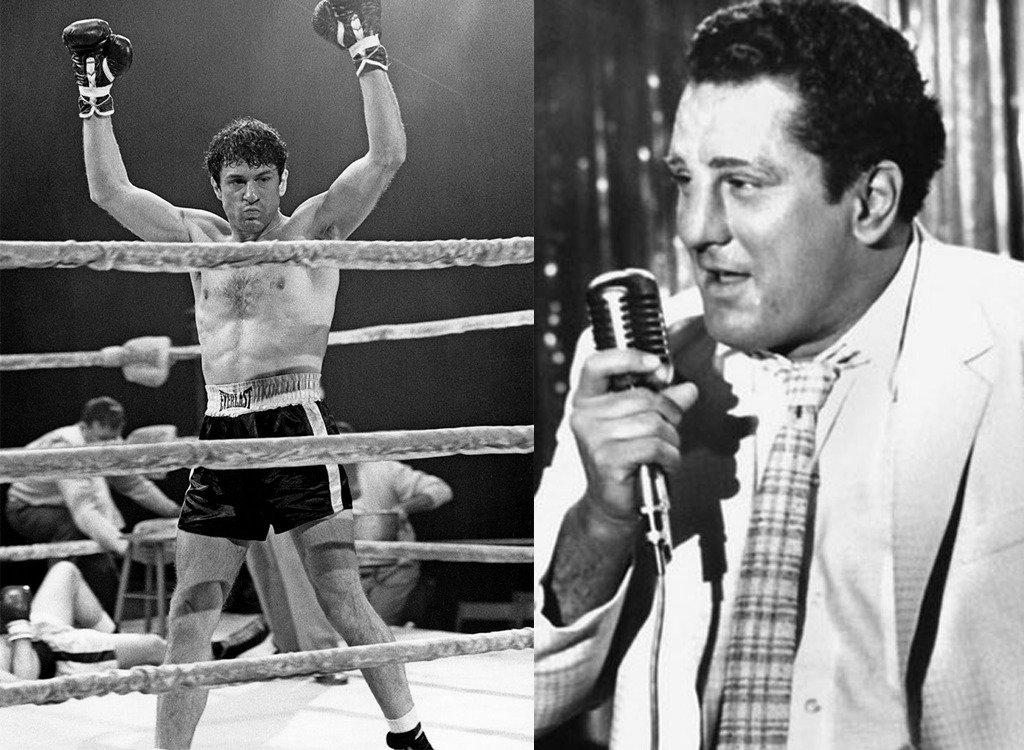 Robert De Niro set the bar for these younger male actors in regard to weight transformations. De Niro actually changed his weight not once, but twice for the same film! That's right, De Niro busted his butt off to play the iconic, muscular Jake LaMotta in Raging Bull and then diminished all that hard work by gaining 60 pounds to play the character in his older years. De Niro developed rashes and breathing issues post weight gain. 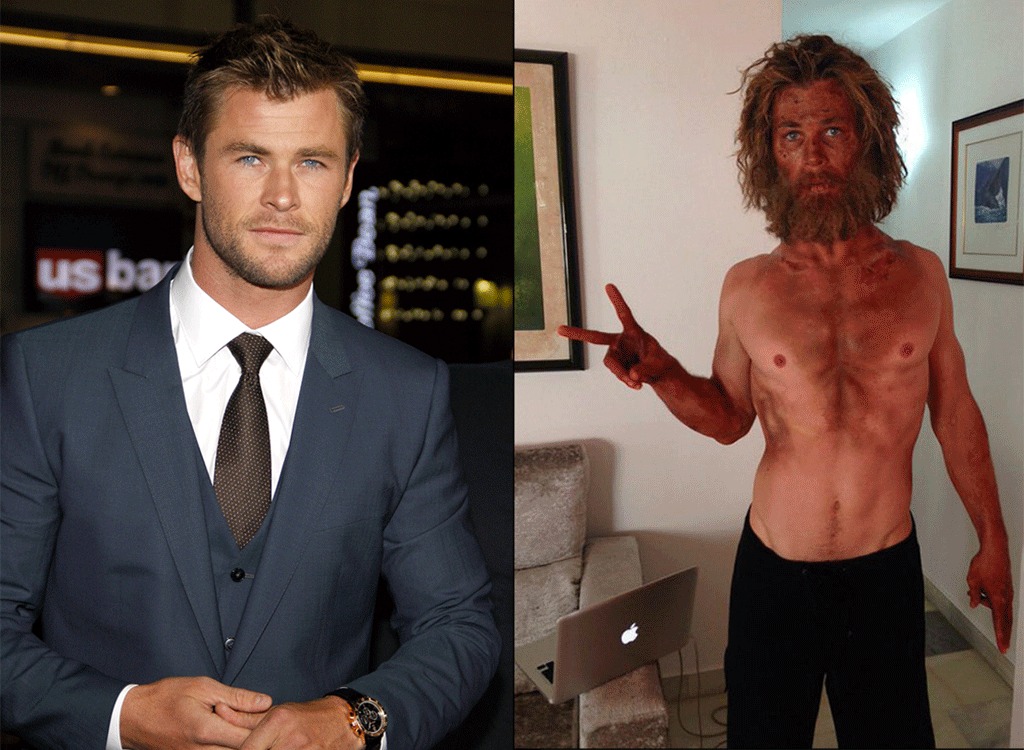 After making his mark as an incredibly buff Thor, Hemsworth then dropped 33 pounds to embody a shipwrecked man at sea in the film In the Heart of the Sea. In the month leading up to the film, he dropped down to consuming as little as 500 calories per day, noshing on nothing but hard boiled eggs and salads. He definitely resembled a man that had been shipwrecked for 90 days, to say the least. 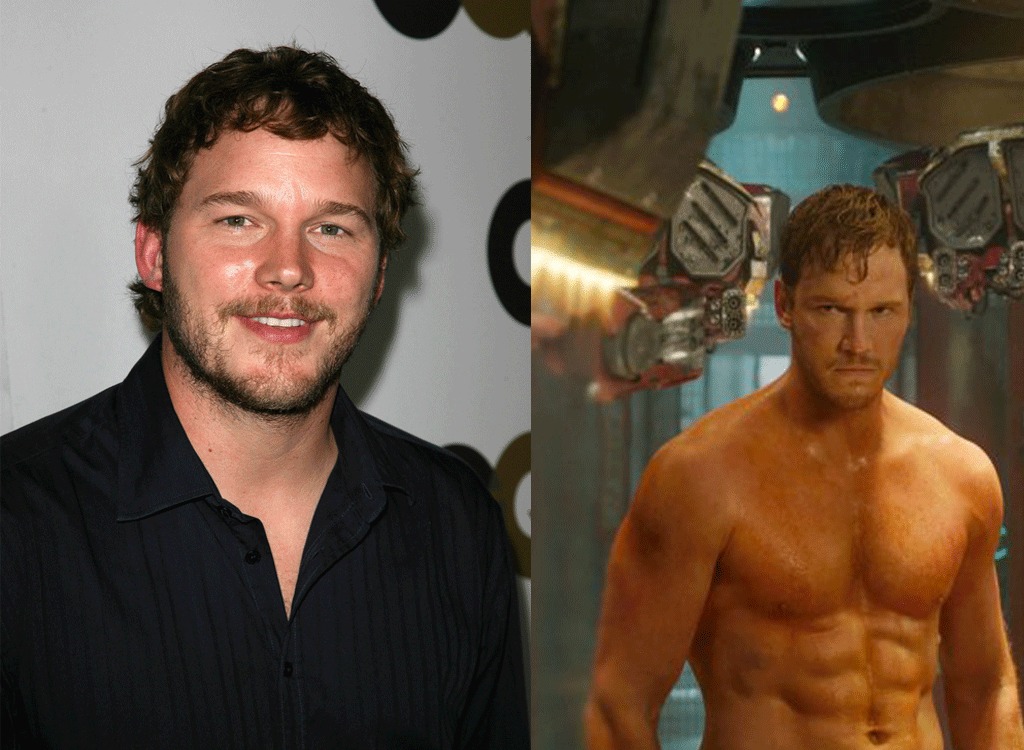 Last, but certainly not least, Chris Pratt underwent an incredible transformation to play Peter Quill, i.e. Star Lord, in Guardians of the Galaxy. So just how much weight did the former portly Andy Dwyer in Parks and Recreation drop? He lost 80 pounds by adopting a strict Paleo-style diet and worked out every single day to slim down and sculpt his body. If you're inspired, check out the 23 Best Protein Shake Recipes for weight loss to see which ones appeal to your palate!