The sub shop seems to have the proverbial nine lives.

Subway, America's most widespread fast-food chain, has had a tumultuous year filled with controversy and a sense of waning popularity, causing speculation that it could finally be slipping into obscurity beyond repair. Its leadership was heavily criticized by franchisees, and the quality of its food was called into question in several recent lawsuits.

But things began to turn around for the chain when it announced it was pulling out all the stops and launching the biggest changes to its menu in the history of the brand. While the effort may have been more of a marketing strategy than one concerned with the betterment of the actual product, it has undeniably worked—Subway ended up achieving its highest monthly sales since 2013 as a result.

The comeback tale doesn't stop there: the company is expected to end this year with $1 billion in sales above initial predictions, and the reinvigorated brand could see longer-term success from the new menu in 2022.

Here are some signs that Subway could be making a comeback, or at the very least, surviving a tumultuous time more than successfully.

For more, check out McDonald's, Subway, and More Are Expected to Be Investigated By the FTC.

A major upswing in sales

Subway says that its huge menu refresh, which rolled out mid-July, increased August sales by more than 4% compared to the same period in 2019. Its 5,000 top-performing domestic locations did even better with a 33% increase in sales. These are the kinds of figures the chain hasn't seen in eight years, which makes the company confident it can beat its projected sales plan for the year by more than $1 billion.

A renewed interest in the menu

While the Eat Fresh Refresh effort was initially criticized as one big smoke-and-mirrors move, data from the field proves that the chain succeeded in renewing customer interest in its food, at least for the short term.

Some operators characterized the changes to the menu as purely cosmetic rather than constituting actual quality improvements. The deli meats are now sliced more thinly but come from the same raw product, an insider told us, while newly added ingredients like rotisserie chicken and mozzarella are simple resurrections of items that were previously discontinued.

On the other hand, many were enthusiastic about the changes. "We are getting an extremely positive reaction from our guests regarding all that is new at Subway," said David Liseno, a multi-unit Subway restaurant franchisee in Central New York State, in a statement. And according to a survey of more than 66,000 guests, 83% of them were fans of the menu changes.

The menu wasn't the only turnaround effort that Subway poured money into this year. The chain followed up the menu rollout with one of its largest media investments ever, tapping pro athletes like Steph Curry, Tom Brady, and Serena Williams for TV spots that ran frequently.

Subway also made improvements to its mobile app, which is now easier for customers to use and more informative about out-of-stock items. It's also easier to get Subway delivered now—thanks to the chain's new partnership with DoorDash. All in all, it seems that the flailing company is finally making long-overdue changes to the customer experience, which could help it right the ship in 2022.

The tuna lawsuit is progressing slowly 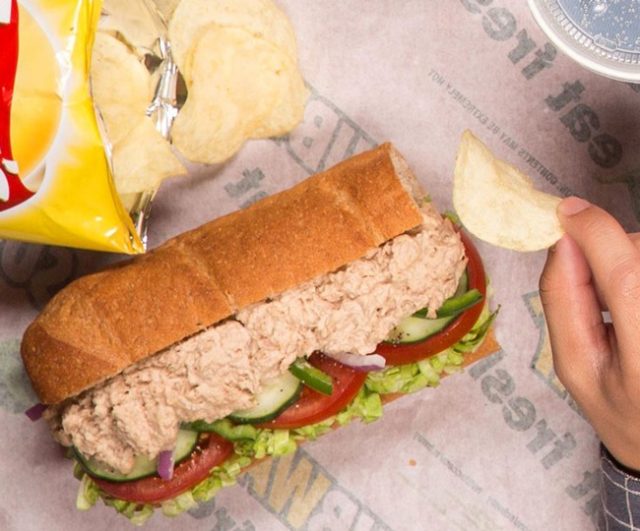 The controversy that may have hurt the chain's sales the most this year was the one about the quality of its tuna. But the lawsuit claiming the chain's tuna is anything but the wild-caught skipjack tuna advertised by Subway is still without resolution, and has hit speedbumps along the way.

The filing in January was a bombshell. The lawsuit claimed that the chain's tuna was "a mixture of various concoctions that do not constitute tuna, yet have been blended together by the defendants to imitate the appearance of tuna." It stated that a lab test performed on a specimen "found that the ingredients were not tuna and not fish." Even the subsequent independent research by The New York Times seemed to have confirmed that, try as you might, you can't actually find any traces of tuna in Subway's tuna.

The no-tuna theory was gaining momentum for a while but has died down as the case hit some speedbumps along the way. After being amended this summer, the lawsuit was almost put to rest in October when U.S. District Judge Jon S. Tigar dismissed it.

It's now back with a bold new claim—that the ingredients in Subway's tuna include proteins from other animals, like chicken, pork, and cattle—but it remains to be seen whether any of this still has the potential to tarnish Subway's recovering image.