These are no longer what they once were.

Visiting your favorite grocery chain could look different now with growing concerns of rising prices and rampant store closures. Falling profits, poor locations, and less than stellar reviews will lead to a lacking customer base and are signs that a store is no longer what it once was. While it's not total doom and gloom for these supermarkets, companies' recent decisions could provide clues into these stores' declining popularity.

The most popular supermarkets have dominated the grocery store scene and amassed a loyal following with widespread appeal, while other chains struggle to keep up. Check out which four grocery store chains have a slight disadvantage against the competition.

RELATED: This Low-Cost Grocery Chain Is Reopening a Closed Store and Upgrading 6 Others

Shaw's is one of the few longstanding supermarkets founded in 1860. Operating under its parent company Albertsons, the privately held Shaw's manages around 150 stores in the New England region. However, 2022 hasn't been easy for the chain, as it wrestles with store closures and waning public appeal. 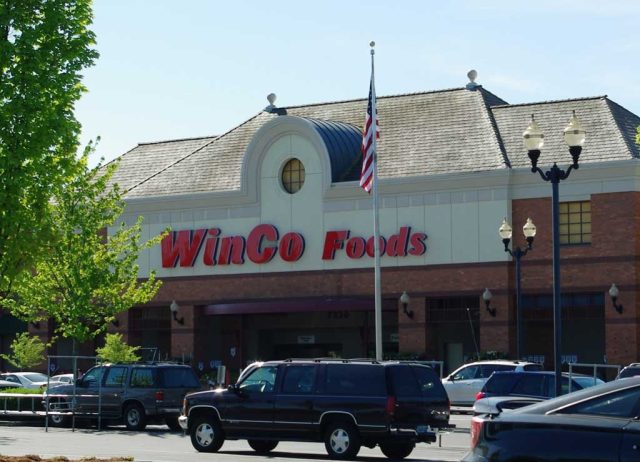 This employee-owned chain operates more than 100 stores in the Western and Mid-Western states. Since 1967, the store has received an overall positive reception from employees and customers alike. But operation expenses presented new challenges for the company.

Shoppers at an Oklahoma City location must adjust to a new store policy that credit cards will no longer be accepted as of Aug. 1, as "…a cost-saving measure." And the financial woes don't end there, because Winco's plans to undergo expansion appear to have hit a roadblock due to expenses. The Texarkana Gazette said that another store was slated to begin construction but the project was halted due to  "the project's cost exceeding the initial estimate by 30%, according to the city."

While its presence remains relatively stable across the Southeast and Wisconsin, the local grocery chain has still shut down several locations in 2021. Often nicknamed "The Pig", the local grocery chain joined other chains like Whole Foods, Kroger, and Sprouts Farmers Market by closing down a number of its own store locations in Florence, S.C.,  Whitmore, S.C., and Nashville, Tenn this year. Inflation, labor shortages, and supply chain issues all contributed to the company's decision to downsize.

One customer in the r/Alabama thread on Reddit shared their experience at the Gurley, Ala. location, noting "I've been to that one a few times and it is always so depressing being so rundown and with higher prices than other grocers."6254a4d1642c605c54bf1cab17d50f1e

Earlier this year, the discount store earned itself a distinct reputation for all the wrong reasons. Apart from frequent robberies, crime, and bad customer reviews, news broke about thousands of dead rats being found at its West Memphis, Arkansas distribution center. The incident prompted a warning from the US Food and Drug Administration (FDA), product recalls that cost the company $34 million, and an investigation that's still ongoing. Community leaders even called for customers to "stop shopping at Family Dollar," and the company temporarily shut down over 400 locations.

This week, (after about 6 months since the rat discovery), Bloomberg reported that "the rats are back," and Family Dollar is facing lawsuits. In a Reddit thread, u/LS-CRX commented that "If you see a Family Dollar or Dollar General within 5 minutes of your home then its time to move."

Alex Perry
Alex Perry is a writer with Eat This, Not That! She graduated with a master's degree in broadcast journalism from Northwestern University, where she experienced all the amazing things Chicago has to offer. Read more about Alex
Filed Under
Grocery Shopping // Grocery Stores // News