Dare we say the competition is on?

Hooters isn't the only restaurant known for its comfort food and beautiful waitresses.

Texas-based restaurant chain Bombshells Restaurant & Bar has been dishing up delicious food since 2013, but in December 2020, it announced its first Franchise Development Agreement calling for three brand new restaurants in the next five years. That means Bombshell Girls might be coming to a storefront near you soon!

Bombshells started in Dallas as a place designed to honor all branches of the military—and that theme carries through to its waitresses, called Bombshell Girls. These women wear cute military-inspired outfits that give off all the vibes of a pin-up girl. Their role, apart from bringing your food to you, is to make you feel right at home in the restaurant. (Related: The Saddest Restaurant Closures In Your State.)

As you might expect from an establishment that's both a restaurant and bar, the grub is meant to be classic and comfort-based. Think simple bites like chicken wings, burgers, and French fries. However, you could also order a full rack of ribs or grilled salmon if you're in the mood for a more sophisticated entrée. Another thing that stands out on the menu? Its line of hot sauces.

The heat of the hot sauces is ranked by its DEFCON level—a series of five progressive levels of alert the U.S. Armed Forces uses to assess a perceived threat to national security. Each establishment boasts a well-stocked bar and extensive drinks menu, making it the perfect happy hour spot. As to be expected, many of the cocktails have military-inspired names, including one patron-based drink called the Camouflage and even a vodka and curacao concoction called Pearl Harbor. 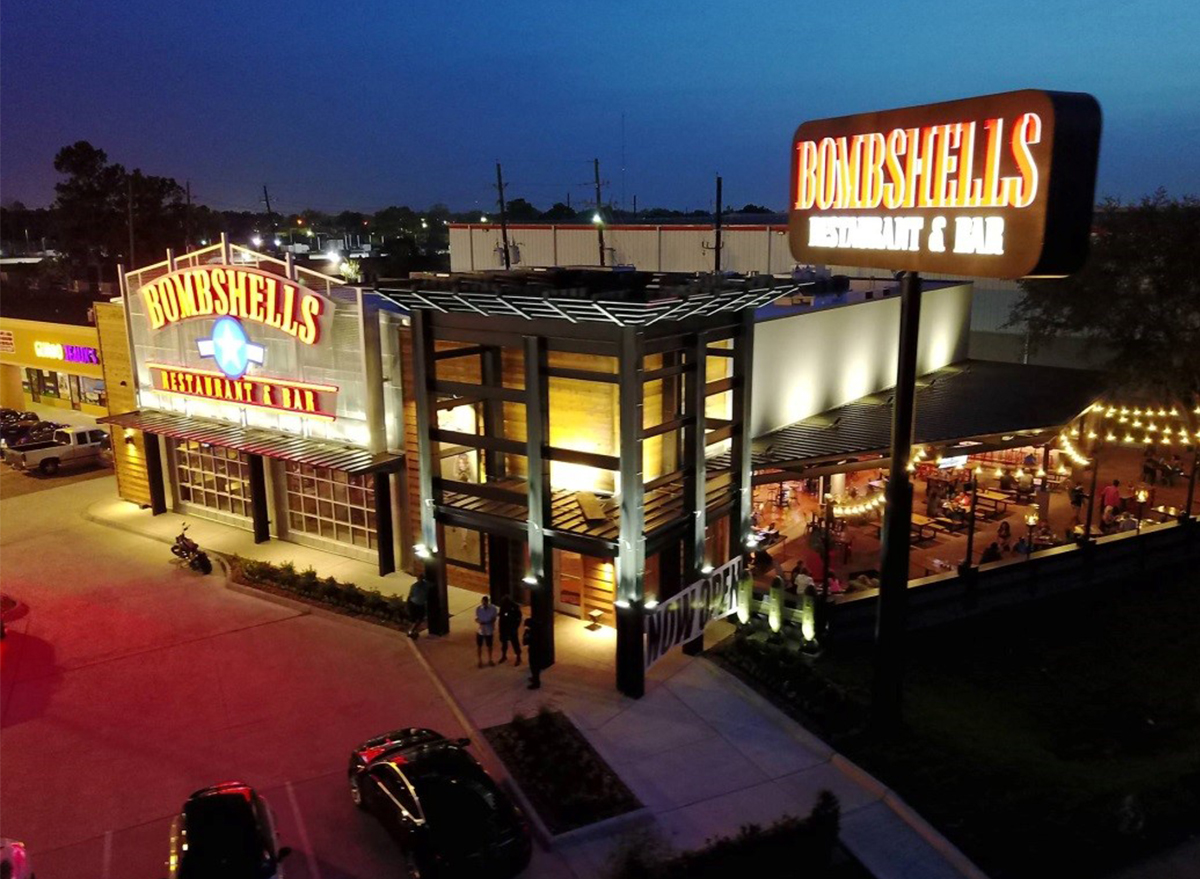 Bombshells Restaurants are currently only in a couple Texas cities, but with this franchise agreement, three new restaurants are slated to open in the coming five years: in Corpus Christi, New Braunfels, and San Marcos. And while this means all the locations are still in Texas, the franchise agreement is a huge step for the restaurant and could indicate that discussions about expanding further are in the works.

In a statement, Nick Mehdi, of the investor group who will manage the San Antonio franchise, describes the atmosphere of the establishment and even touches upon the demographic that strolls in to dine or drink.

"We believe Bombshells is a significant entry into the market for modern sports bar restaurants. It appeals to singles, couples, and families, including millennials; does a strong lunch, dinner and late-night business; and with its large, distinctive design and outdoor patio, has demonstrated its ability to do well and operate safely through the pandemic."

We speculate Bombshells garnered mass appeal over the years for both its affordable menu items and the genuine hospitality of the staff. Not to mention, the restaurants even offer live entertainment (in normal times), so this is not one to miss!

For more restaurant news, make sure to sign up for our newsletter.