32 Popular Snacks That Have Disappeared

How many of these nostalgic snacks have you tried?

Snacks from your childhood have a way of sending you right down memory lane. Maybe it's a sugary cereal that brings you right back to those carefree Saturday mornings spent watching cartoons. Or was there a certain cookie that you hoped to find when you cracked open your lunchbox in the elementary school cafeteria, one that everyone wanted to trade for?

Here, we're going to strike some nostalgia with some of the most popular childhood snacks that are gone (but never forgotten!).

And for more, try one of these 45+ Best Healthy Copycat Restaurant Recipes.

Saturday morning cartoons and a bowl of cereal just go together. Enter: Post's Pink Panther Flakes. The commercial for the sugar-coated pink flakes incorporated the Pink Panther theme song. The cereal jingle opens: "Pink Panther flakes are… pink." It's not the most inventive jingle, but, hey, it's true! Some boxes of this cereal even came with spy kits.

Ancient relics (OK, a promotional photo on a Tumblr page) reveal that McDonald's once served Onion Nuggets in the 1970s. The nuggets look like a golden fried onion ring, but, you guessed it, in the shape of a chicken nugget.

Playing off the success of Pop Rocks, General Mills released a "Space Dust" candy in 1976 that was basically a ground-up, powdery version of the candy. But, there was one problem: Parents were concerned the powdery texture of "Space Dust," and the name, was too similar to illegal drugs, like "Angel Dust," also known as PCP.

The candy was rebranded as Cosmic Candy, and, in an open letter to parents—which is preserved on Gone But Not Forgotten Groceries' website—the candy's inventor assured parents the candy is safe. "I have brought a lot of fun into the world with this candy; I guess, but I am writing this letter because I want to assure you that the product is a safe one," wrote the candy's inventor, Bill Mitchell. Despite the name change, the candy eventually fizzled out.

Picture it: A Lime Jell-O mold, the center filled with a seafood salad. While these recipes aren't officially discontinued (retro recipes are still out there!), you're probably not likely to see a bright green Jello salad at potlucks or parties in this decade. Taking liberty with the definition of "salad," gelatin molds were all the rage in the 1970s. One Jell-O salad that's seemed to stand the test of time, though, is the strawberry pretzel salad.

And for Jell-O's next trick … one mix, separating into three layers! Jell-O 1-2-3 came in various flavors, like mixed berry, strawberry, or orange. The three-in-one dessert had the texture of, yes, Jell-O, but also pudding and mousse. While you can't get the packet anymore, Kraft Foods has a recipe that recreates this dessert with a Jell-O packet and Cool Whip.

In 1968, General Mills debuted these wheel-shaped pizza crisps that tasted like tomato, pepper, cheese, and other spices. The back of the original box promised: "All the true delicious pizza flavor in a munchy, crunchy, mouth-sized snack!" The snack was discontinued around 1975, according to General Mills.

With the adage "We take the flavors you love, and make them go crunch," General Mills also sold Onyums in the 1970s. The package described these snacks as being mild fried onion rings … only noisier.

Potato Crisps were another one of General Mills' signature crunchy snacks that dominated in the 1970s. The package described them as that last little extra-crispy fry that people fight for. While Potato Crisps, Onyums, and Pizza Spins have all gone extinct, Bugles—the crunchy corn snack—are still available today. 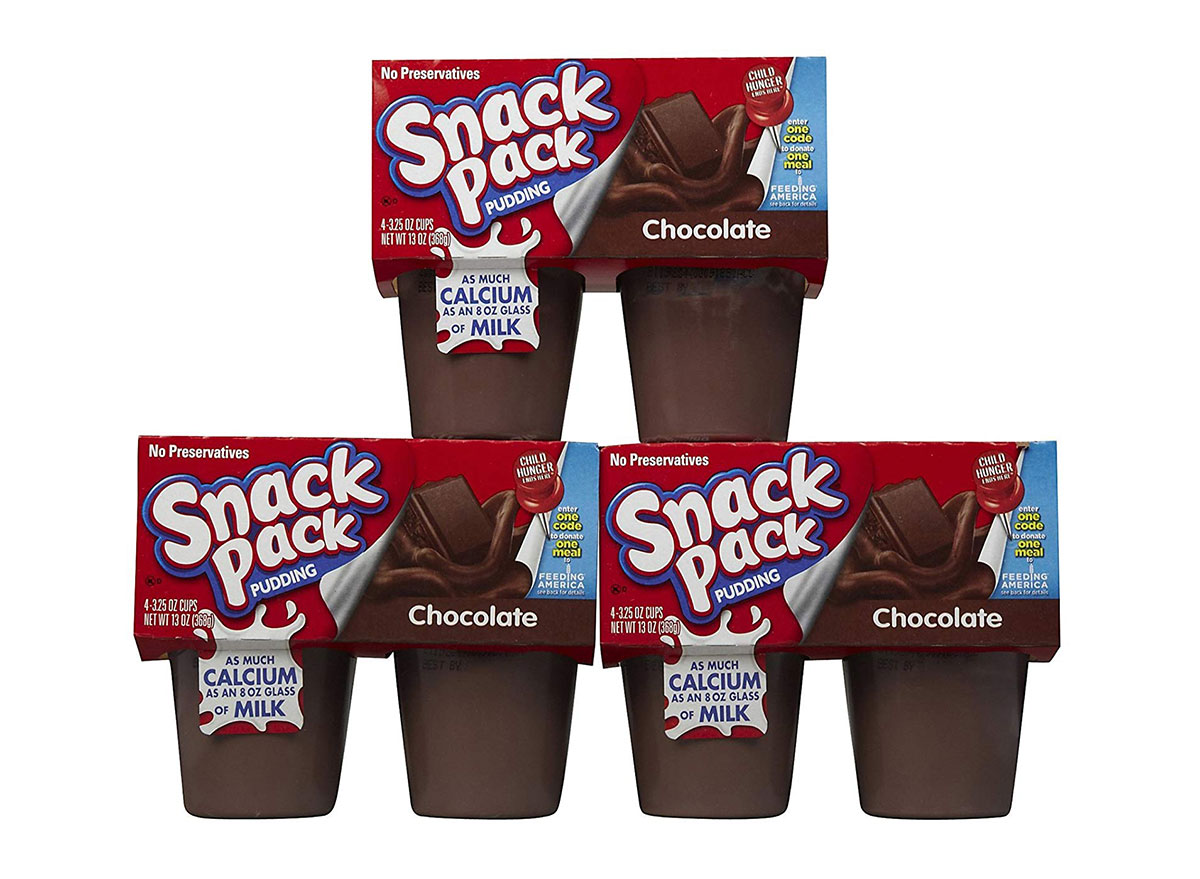 Packaged pudding packs remain popular today and even come in inventive flavors (hello, pink and blue unicorn pudding!). But do you remember in the 1970s when Hunt's Snack Pack was packaged in an aluminum can?

Like Tang, Space Food Sticks, which are akin to today's energy bars, go down in NASA's "Space Food Hall of Fame." Originally, Pillsbury created the crumb-free space sticks for astronauts. But, earthlings got a taste, too, with flavors like chocolate malt, caramel, or orange hitting supermarket shelves.

Several makers had versions of banana flip snack cakes, which were also known as banana dreams. Shaped like a half-moon, the spongy cake was filled with fluffy, banana-flavored cream.

Sports drink maker Gatorade dabbled in the gum game, too. Gator Gum debuted in the 1970s and was gone by the 2000s but was pretty popular in the 1980s. It came in the original lemon-lime Gatorade flavor as well as orange. The packaging said it could quench your thirst, but we can't say how well it worked.

The Nintendo Cereal System introduced a two-in-one Super Mario Bros. and Zelda-themed cereal in the late 1980s. An unopened box of the cereal with fruit-flavored Marios and berry-flavored shields reportedly sold for $207.50 in 2010, according to Nintendo Life.

A Saturday morning classic, Post's Smurf Berry Crunch was a fruity red and blue cereal that came out in 1983. A few years later, Smurf Magic Berries made their debut with mini marshmallows. 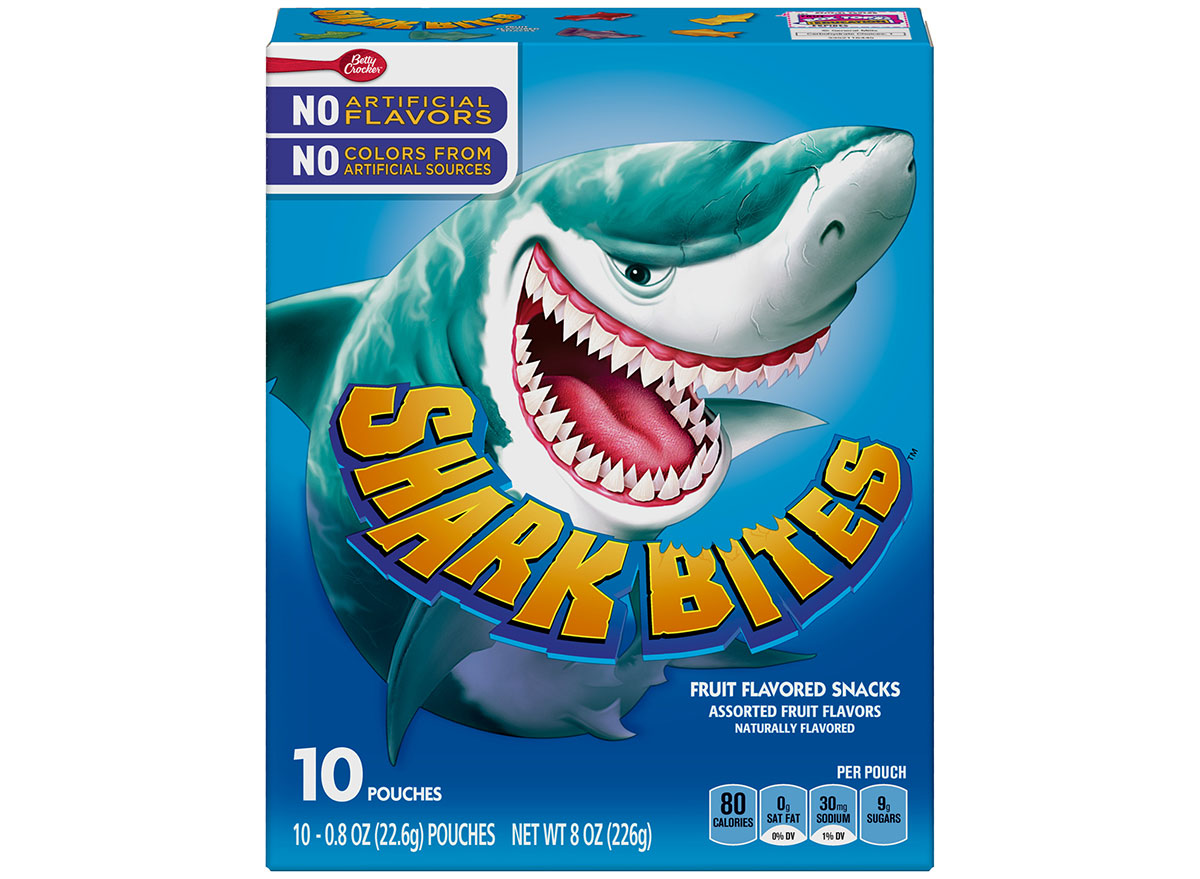 Technically, you can still buy Shark Bite gummies from Betty Crocker. But today's kids will never know the thrill of finding a rare great white shark in the package of fruit punch fruit snacks.

Mint Chocolate Chip! Chocolate Strawberry! Pumpkin Spice! Oreo is constantly churning out new flavors. But the circumference of the cookie, in recent years, has remained constant. Dial it back to the 1980s, though, and you could get a super-sized Oreo Big Stuf (yes, with just one "F").

While they debuted in the 1970s, Jell-O Pudding Pops hit peak popularity in the 1980s. A box of pudding pops came in flavors like chocolate, vanilla, and swirled. If you're really craving a pudding pop, and a Fudgesicle doesn't come close enough for you, there are pudding pop molds so you can make your own.

A shortbread cookie filled with fudge, Keebler Magic Middles were the coveted cookies in lunchrooms across America in the 1980s and '90s. A peanut butter flavor was available, too. The Magic Middles cookies were great for dunking in milk and have enough fanfare that there's a Facebook group dedicated to bringing them back.

Ecto-Cooler came out in 1987, according to Food and Wine, and the neon green drink was a way to market "The Real Ghostbusters" cartoon. Still get a craving for it? Food and Wine has a recipe to remake it, using tangerine and orange juices, as well as a little bit of lemonade mix and some green food dye.

Packaged in a carton much like juice, these little pebbles of gum came in flavors like orange, apple, or grape. A pink lemonade flavor joined the lineup later. 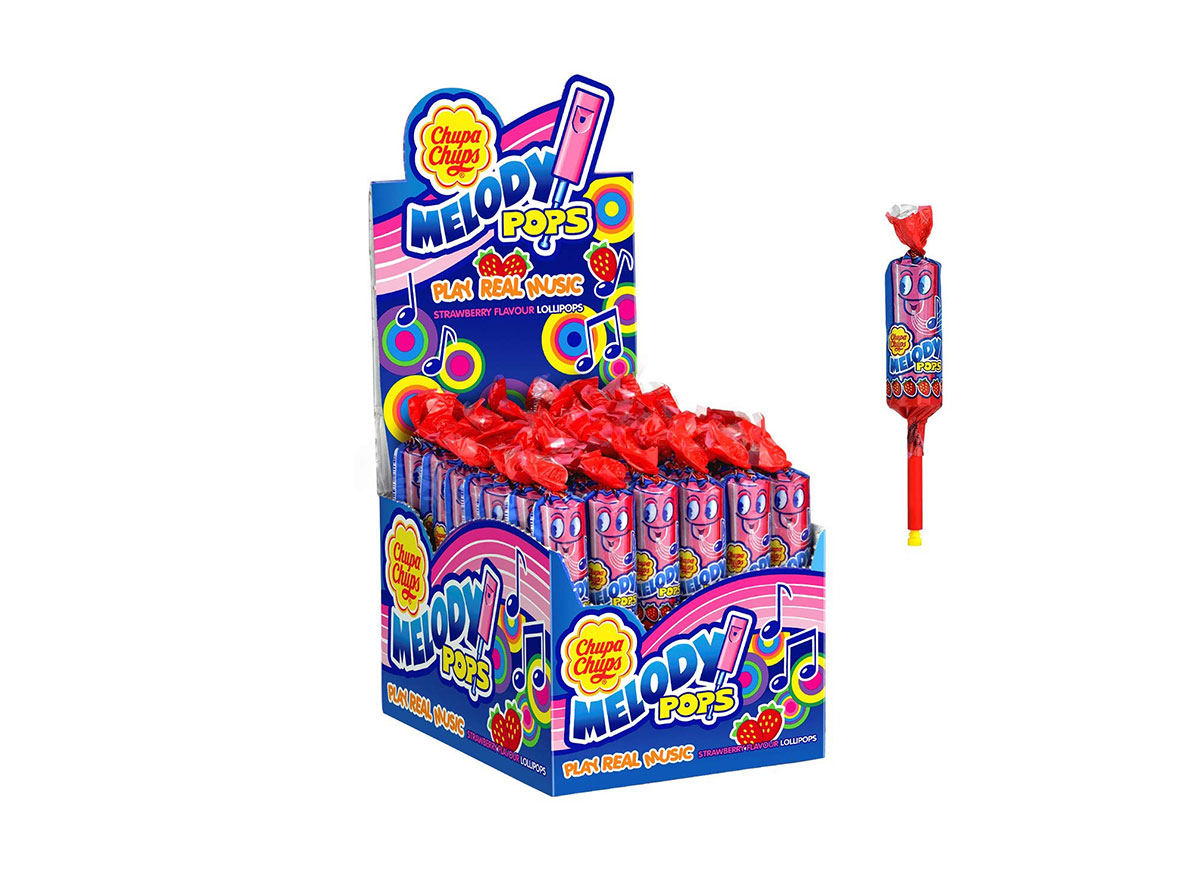 A sucker that could give kids a sugar buzz and could produce a whistling noise? What could go wrong? Whistle Pops, which were made with a hole in them and were popular candies in the '80s and '90s. While they are no longer around, Chupa Chups makes similar "Melody Pops."

As a tribute to legendary Yankees player Reggie Jackson, this milk chocolate bar with peanuts and caramel had a short run from 1976 to 1982. It did make a brief comeback in the 1990s, according to Bon Appetit.

If it sounds a lot like a Baby Ruth, it was. But Baby Ruths aren't named after famed baseball player Babe Ruth.

Flintstones orange sherbert in a cardboard push-up tube was the perfect summer treat. The good news? You can still get Nestlé Push-Up Pops in cherry, grape, and orange flavors. But the Flinstone-branded pops, sadly, are now, well, dinosaurs.

Squeezits were the lunchbox staple in the 1980s (and 1990s, too). According to General Mills, the maker of the Squeezit, the fruit juice in a squeezable bottle was launched in 1985. It originally came in four flavors: red punch, orange, grape, and cherry. By 1992, more flavors were offered and the bottles changed to feature their faces, like Silly Billy Strawberry, Smarty Arty Orange, and Berry B. Wild. By 1995, there was a Squeezit and Life Saver collaboration. But, sadly, this treat is no more.

Hollow milk chocolate with toy figurines inside, Nestlé Magic Balls were like the Happy Meals of the candy world. But, in 1997, they were discontinued over concerns that hiding toys inside chocolate could pose a choking hazard. The candy made a comeback as the Nestlé Wonder Ball, this time with candy filling the chocolate sphere. Those, too, were eventually discontinued.

In the early 1990s, Butterfinger debuted its candy bar in itty-bitty, bite-sized pieces known as Butterfinger BBs. There's an online petition to bring them back, claiming today's Butterfinger Bites just don't compare to these marble-sized treats.

The transparent, caffeine-free soda U.S. had a short run in the early 1990s. It was a novelty, but it didn't taste quite like Pepsi. Saturday Night Live parodied the product in a crystal-clear gravy skit, Thrillist recounts. Because it is something that instills some serious nostalgia, Crystal Pepsi has made some limited-time comebacks in recent years.

This bite-sized peanut buttery Planters snack was first introduced in 1992. The original P.B. Crisps were graham cracker cookies that were filled with a peanut butter creme, but there were also spin-offs, with chocolate creme and a PB&J one with strawberry filling and peanut butter creme. Like many other discontinued snacks, P.B. Crisps have a fair share of fans who are demanding they make a comeback.

These baked snacks were like a crunchy cross between chips and crackers. They came in flavors like onion, ranch, and cheddar. But Keebler quietly discontinued them in the 2000s.

Tiny bite-sized Life Savers pieces hit the candy scene in 1990. They came in flavors like island fruits and a minty Peppermint, yet they were still distinctly different from Tic-Tacs. They did face a recall in 1991 after reports of kids and teens biting off the flip-top plastic cap. 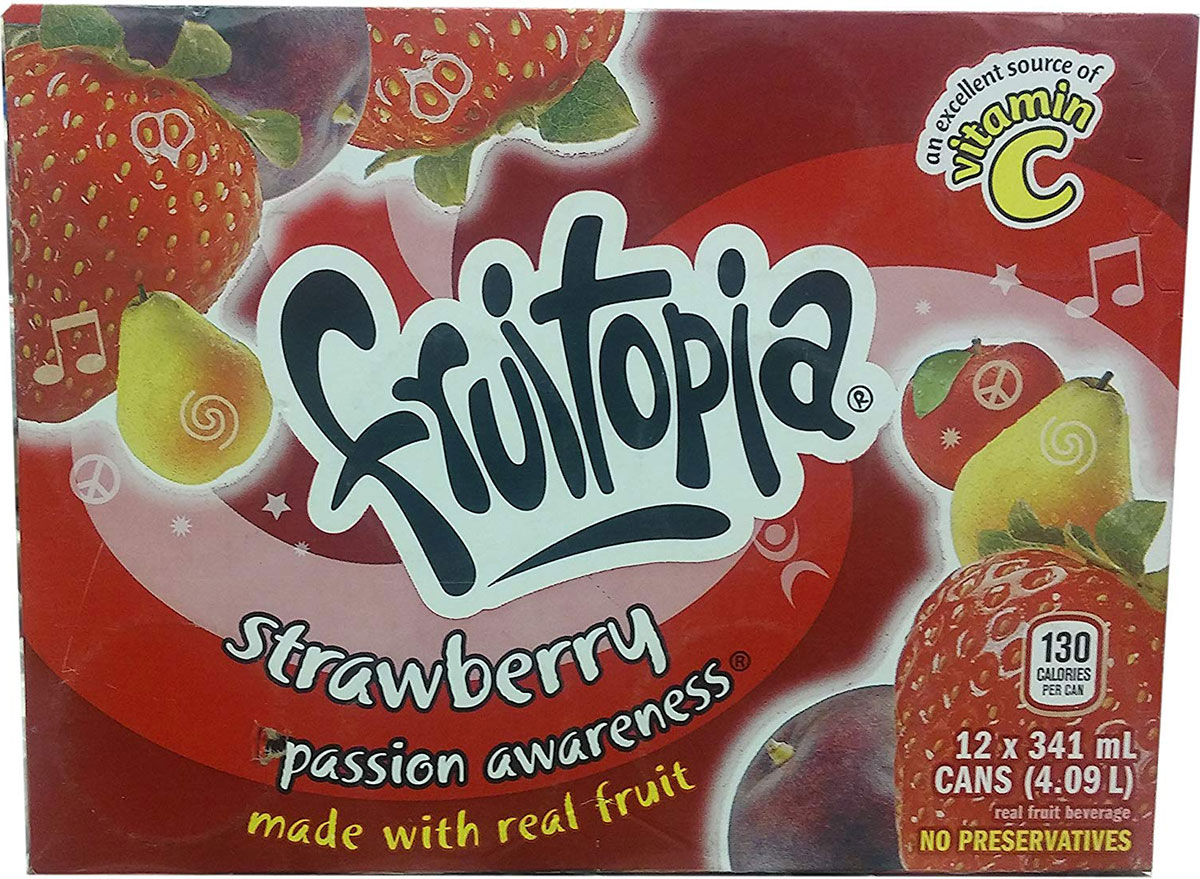 In the mid-1990s, Coca-Cola unleashed Fruitopia to the world. You may have even had a Fruitopia branded vending machine in your school. But, did we ever question the names of the flavors, like "Strawberry Passion Awareness," "Citrus Consciousness," and "Lemonade Love and Hope?"

Atlas Obscura reminds us that Fruitopia was so prevalent in '90s pop culture that it was referenced on a Simpsons episode.

Fruit snacks come in all shapes and sizes. The actual bite-size snacks. Fruit leathers. Fruit by the Foot. Fruit Roll-Ups. But, remember the zany rope-like Fruit String Things? They were arranged like a labyrinth, and unraveling them was a part of the fun.

Which one of these childhood snacks do you wish would make a comeback?