Organic Doritos Could Be Coming to Whole Foods

It's not often you read "organic" and "Doritos" in the same sentence, but the popular junk food is getting a healthy makeover thanks to Frito-Lay's new line of snacks called "Simply." The Simply line includes cleaner versions of Frito-Lay snacks including all-natural Cheetos, Fritos, and Ruffles, and organic Doritos and Tostitos. Unlike their traditional counterparts, Simply snacks have no artificial flavors or colors and are made with organic ingredients.

Frito Lay, which is a division of PepsiCo Inc., is hoping this new snack lineup can help the company rebrand and find their way into natural food stores; namely, Whole Foods. The new Simply snacks meet all the requirements to be sold in Whole Foods says PepsiCo executive Jonathan McIntyre, according to Bloomberg. Expanding their food offerings is one of the 5 Reasons Why Amazon Buying Whole Foods Changes Everything.

Whole Foods shoppers have already seen Amazon-influenced changes since the deal closed on Aug. 28. A bunch of grocery items went on sale, including organic bananas, organic brown eggs, organic avocados, and ground beef. Other perks of the acquisition include Amazon Prime members having access to special Whole Foods discounts and in-store benefits and the grocery store's private label, 365, being sold on Amazon.com. 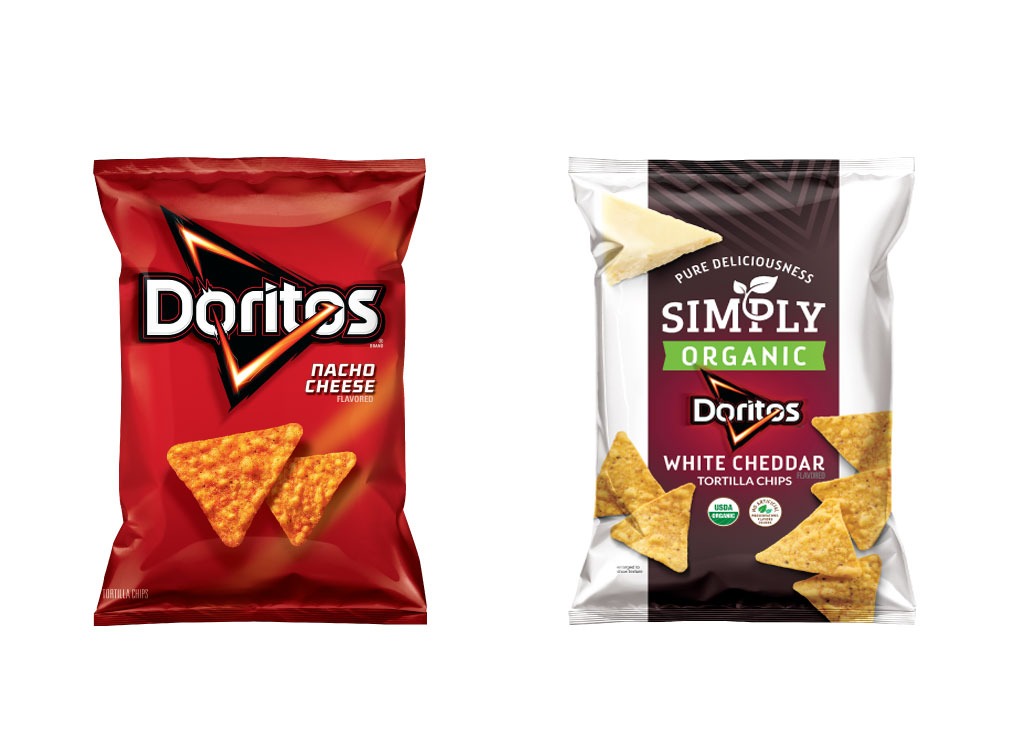 Aside from all the ingredients in the new Simply Doritos being organic, the new chips are missing quite a few sketchy additives from the original version. Traditional Doritos are made with MSG, an additive that's been linked to an increased appetite and weight gain.

The old Doritos are also made with artificial dyes, including Yellow 6, Yellow 5, and Red 40. These dyes have been linked to Attention Deficit Disorder (ADD) in children. The organic Doritos, on the other hand, are instead made with a blend of organic spices and lacking the bright orange hue of classic Doritos—after all, the flavor for the organic version is white cheddar instead of nacho cheese. And while it's listed further down in the ingredients panel, the traditional Doritos are also made with sugar, which is missing from the organic Doritos.

The nutritional information is pretty similar for both types of Doritos, serving-for-serving. In fact, the organic chips have a little bit more calories and one more gram of carbs. But they do have less sodium, thanks to the omission of the MSG.

It's not just Doritos; the ingredients in the Simply snack line are cleaner than their classic counterparts, but the nutrition information is about the same across the board.

But if customers are looking to rid their diets of artificial dyes, ingredients, and preservatives, then Frito Lay's Simply line could be a good option. No word if Whole Foods will actually start carrying the line any time soon—Amazon and Whole Foods have yet to comment on the idea—but the new ingredients panel is a good start in the right direction.