Surprising Foods That Have Caffeine and Make You Gain Weight Fast

Too much caffeine may be hazardous to your overall health. And it's lurking in surprising foods.

It all started in the highlands of Ethiopia, where, according to one popular legend, a goatherd named Kaldi watched his flock frolic around with unusual spunk after nibbling on some berries. It was coffee that the get-up-and-go goats had discovered. And ever since, caffeine has been the world's go-to, pick-me-up drug. But it's not only coffee that contains the energy booster—there are many ubiquitous foods with caffeine sitting in your pantry right now.

As vices go, caffeine's not terrible for your health. In fact, most studies suggest the average adult can safely ingest up to 300 to 400 milligrams of the stimulant per day (about three cups of strong coffee) and experience many of the health benefits of coffee — everything from improved concentration to increased longevity. But too much caffeine can have the opposite effect on overall health, with side effects that include anxiety, increased belly fat, insomnia — even death. And children are particularly susceptible, warn health experts.

If you're wary of your intake — and your kids' — cutting back on the obvious sources like coffee, tea, and energy drinks is a solid first step. But detecting caffeine culprits isn't always easy, as the U.S. Food and Drug Administration doesn't require manufacturers to list the content on nutrition labels. Here are seven hidden and surprising sources of caffeine that serve up an unexpected jolt.

Snack bars typically rely on calorie- and carbohydrate-dense ingredients like nuts and dried fruits to keep you energized, but there are exceptions. A Clif Energy bar serves up 50 mg of caffeine, which is more than a can of Coke. And Zone Perfect's Caramel Pecan Bar contains 14.5 mg — about what you'll find in a small Dunkin' Donuts Coffee Coolatta. 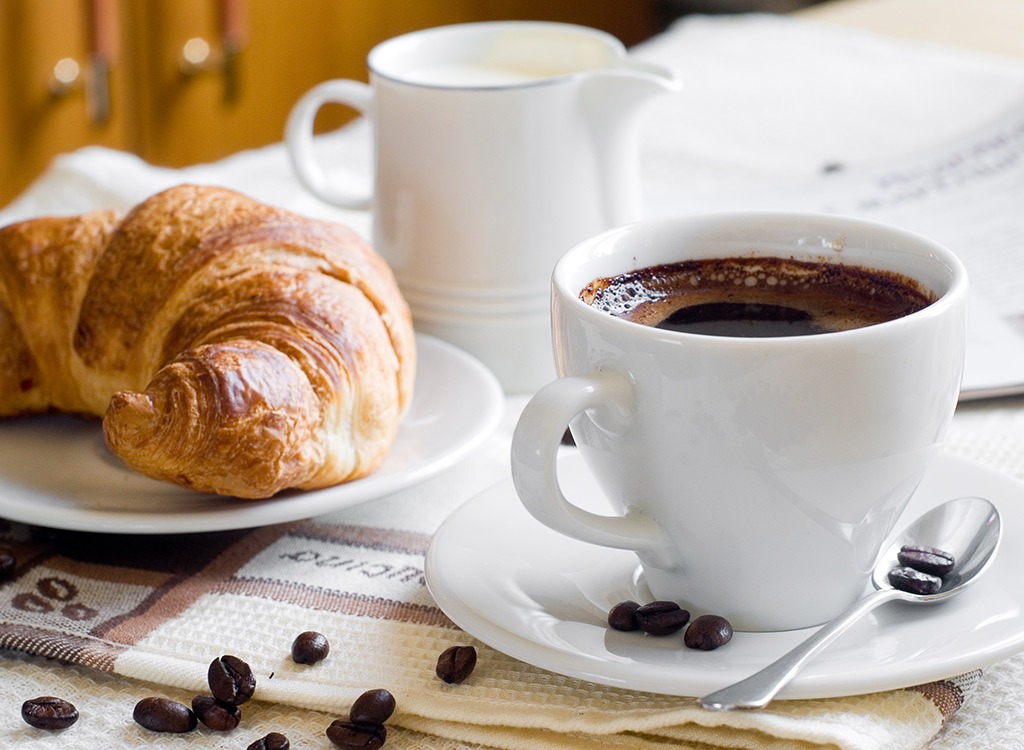 Don't let the name fool you: decaf does not mean caffeine-free. While FDA regulations require 97 percent of caffeine to be removed from the beans for coffee to be marketed as "decaffeinated," beans vary wildly in their caffeine content, and that remaining 3 percent can pack a jittery punch, according to research. A 2007 analysis by Consumer Reports of 37 decaf coffees from popular chains found that although most cups had fewer than 5 milligrams of caffeine, some had quite a bit more. In fact, one cup from Dunkin' Donuts contained 32 milligrams while another from Seattle's Best packed 29 milligrams. If you're looking for a reliable low-caf cup, head to the Golden Arches; it was decaf cups from McDonald's that consistently had the fewest milligrams of caffeine.
3

Coke is right up there with coffee as a well-known caffeinated culprit. But while a can of cola will cost you 29 mg of the jumpy stuff, other non-cola sodas contain just as much caffeine — if not more. A Sunkist Orange Soda lags not too far behind notoriously stimulating Mountain Dew with 41 mg. And for all you 90s kids enjoying the recent resurgence of the acid-green citrus pop (now available on Amazon), it wasn't just the sugar in this famously axed soda that sent you bouncing off the walls. A 16-ounce can of Surge contains a heart-racing 69 mg of caffeine. 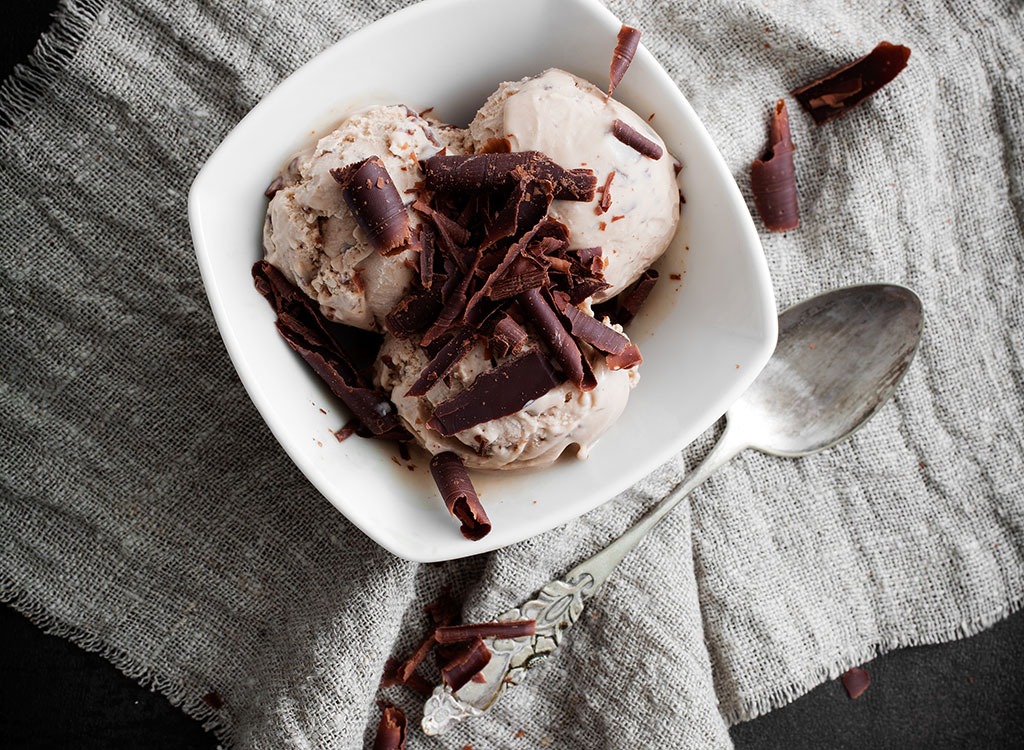 If there's coffee in your ice cream or yogurt, expect a small caffeine boost. According to a report by The Center for Science in the Public Interest, a one-cup "tennis ball-sized scoop" of most popular brands contains 60 mg of caffeine, which is about as much as two cans of Coke. Though some brands fall a bit lower — a half-cup serving of Ben & Jerry's Coffee Heath Bar Crunch delivers 40 mg of caffeine — that's still more caffeine than you were probably banking on taking in while you watched Jimmy Kimmel. The same goes for morning picks like Dannon All-Natural Coffee Yogurt, which packs 30 mg of caffeine into each 6-ounce serving. If you're serious about clocking your caffeine intake, keep your eyes peeled for less obvious coffee flavor terms like "java" and "mocha."
5

Any candy bar containing chocolate will deliver a bit of a jolt. That's because caffeine occurs naturally in cocoa beans, as does the compound theobromine, which also acts as a stimulant. While most candy bars have less than 10 mg of caffeine (a 1.55-ounce HERSHEY'S milk chocolate bar contains about 9 mg), the darker the chocolate, the more generous the jolt, which is why we named this sweet treat one of our foods with caffeine. A half-cup of semisweet chocolate chips has about 30 mg of caffeine, according to a Caffeine and Activation Theory report.

Chances are it's the sugar content in hot cocoa, not the caffeine, that may leave your kids (or you, no judgment) bouncing off the walls, but any amount of cocoa powder or chocolate syrup will add to your daily intake. A Tall hot chocolate from Starbucks, for example, serves up a not-insignificant 20 mg of caffeine, and the same size mocha — a coffee drink with chocolate syrup — serves up 95 milligrams. If you're looking for a kid-friendly chocolate syrup pick, choose Nesquik over Hershey's. Two tablespoons of the later will add 5 mg of the energy booster while the manufacturer of Nesquik claims their chocolate powders are "99% caffeine free."6254a4d1642c605c54bf1cab17d50f1e 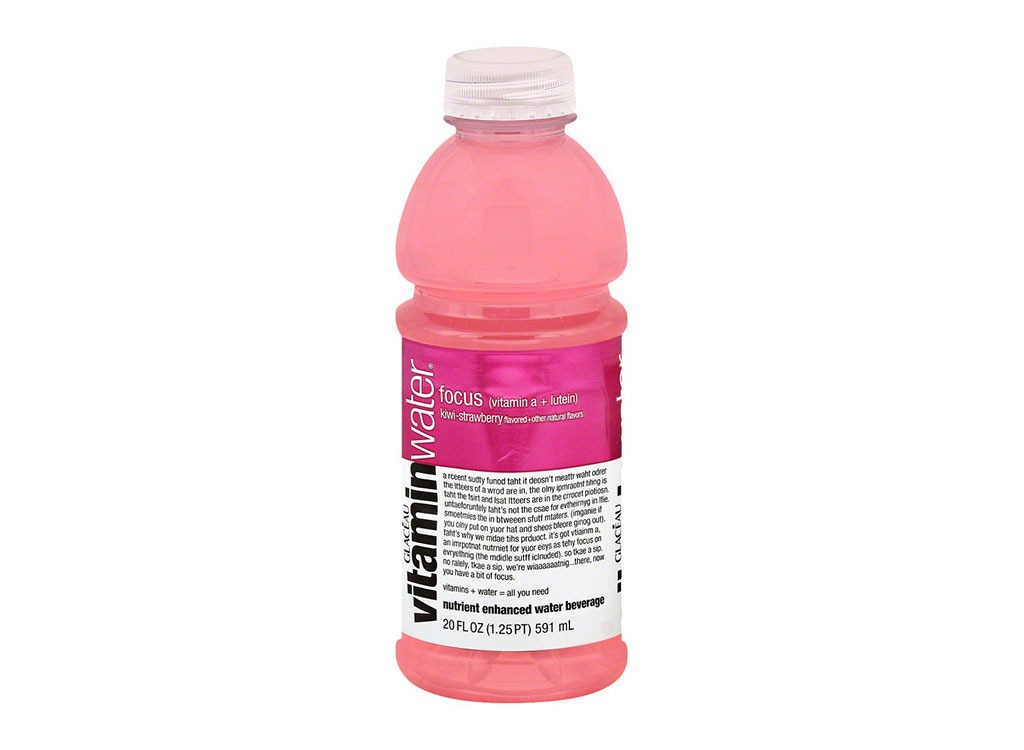 A bottle of water that can give you the jitters? Some trendy energy-boosting waters include caffeine and other potent stimulants like guarana—an extract from a Brazilian plant with double the caffeine content of coffee seeds. Vitamin Water Energy has 50 mg per 20 fl oz bottle. Fail to read the label before throwing back a bottle of 100% natural Avitae, and you'll have consumed 125 mg of caffeine—the equivalent of about two shots of espresso.