The Dangers of Walking for Exercise, Say Top Experts

It's one of the safest exercises you can do. But walking still comes with a few noteworthy risks.

You'd think that walking is the safest thing you can possibly do. And, of course, you'd be right. After all, walking is perhaps the most basic of all physiological movements—something most of the humans on the planet were born to do that requires little to no instruction whatsoever.

But if you walk for exercise—you head out onto the pavement every day to burn calories and work your muscles and your cardiovascular system—there are indeed some inherent (if usually rare) dangers in doing so.

For starters, you can be wearing the wrong shoes that will impact your body's kinetic chain negatively over time, you could be walking in the wrong places at the wrong times, and ultimately you could be relegating yourself to a form of fitness that, while incredibly low-risk, doesn't necessarily come with high rewards. Read on for some of the biggest dangers to being a fitness walker that you need to know about. And for some great ways to take your walking to a higher level, make sure you're aware of the The Secret Trick for Walking for Exercise, According to Health Experts at Harvard University.

You're Putting Your Shoulders at Risk of Injury

We've all seen those hardcore speed-walkers who pump their arms while clutching weights. Leading walking experts would urge you not to follow suit. "[Two- to five-pound dumbbells] don't create enough resistance to develop meaningful changes in strength," Michele Olson, Ph.D., a professor of exercise science at Auburn University at Montgomery, in Alabama, explained to Real Simple. "Yet they're heavy enough to increase the risk of shoulder injury."

So ditch those light weights when you head out for your walks to minimize the risks to your body. For other ways to increase the intensity of your walks, see Why This Crazy-Popular Walking Workout Totally Works, Say Experts.

You're Older, Walking at Night—Or Both 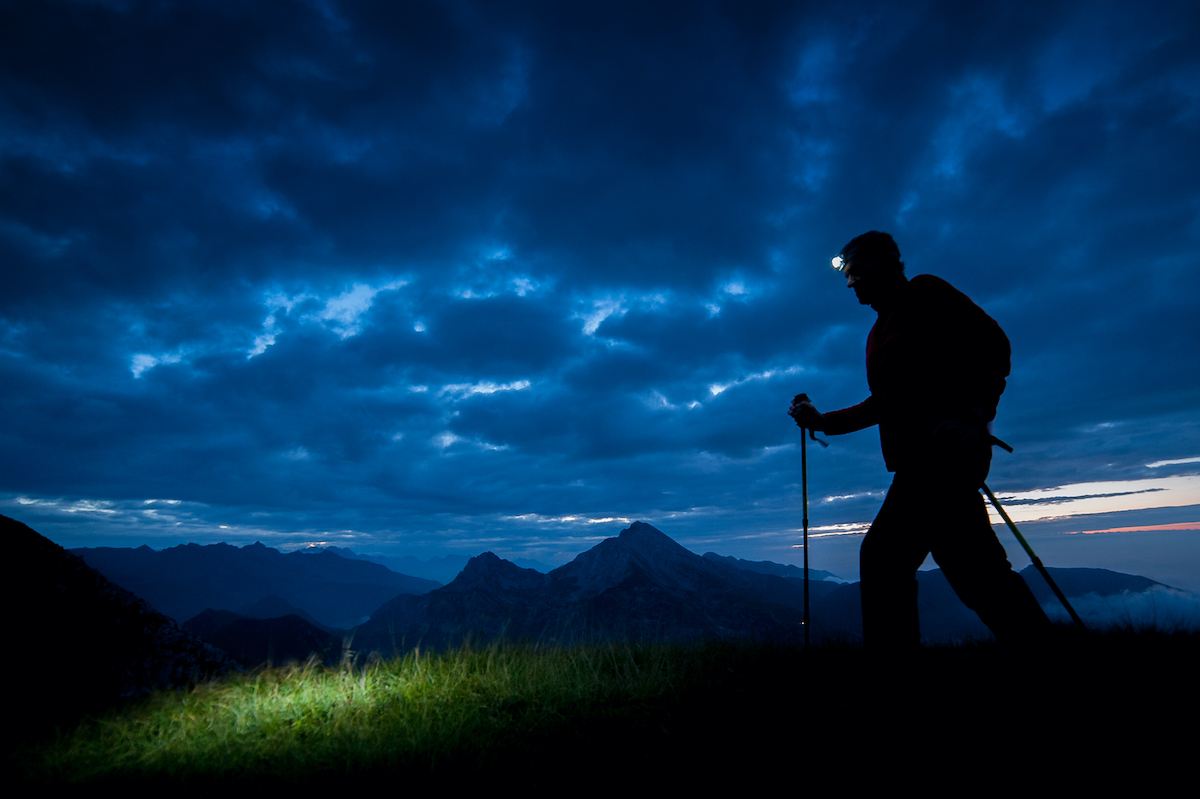 Fact: In the previous decade, American drivers killed roughly 53,435 people. According to a study published last year by the Governors Highway Safety Association, 6,590 pedestrians were killed in the first half of 2019, which represents more than in any year since 1988. According to their data, pedestrian deaths were the biggest cause of traffic death by far, amounting to 17%. "A high majority of pedestrian deaths occur at night," explained the Pittsburgh Post-Gazette. "During the 10-year period, nighttime pedestrian fatalities increased by 67% compared to a 16% increase in daytime pedestrian deaths."

A study released earlier this year found Florida to be the most dangerous state to walk in the country. "People walking in lower-income neighborhoods die at nearly three times the rate as those in well-to-do neighborhoods," observed The Tampa Bay Times. "Anyone between 50 and 64 years old faces a higher risk and, for those over 75, it's far higher still."

You're Risking Tension in Other Muscle Groups

According to Anil Ramsey, an expert in back and muscular health—and the CEO of the ergonomic company ChairsFX—physical dangers from walking every day include foot and leg problems, such as plantar fasciitis, which is when inflammation in the heel and arch of your foot causes pain. But the bigger risk is long-term, he says. "If you only walk for exercise, you might not give yourself the opportunity to work out other groups of muscles in your body, therefore you could experience tension on your muscles and ligaments over time," says Ramsey.6254a4d1642c605c54bf1cab17d50f1e

Your Choice of Shoes May Expose You to Injury

A new study published this year in the Annals of Internal Medicine sought to pinpoint which shoes are best for aging walkers who suffer from knee osteoarthritis (OA), otherwise known as "wear-and-tear" arthritis, which manifests itself in your joints in the form of stiffness, a loss of cartilage, and eventually pain.

The research team, based in Australia, recruited 164 patients who suffer from knee OA and divided them into two groups: those who would wear flat and flexible shoes for at least six hours a day for six months, and those who would wear "stable supportive shoes." The researchers recorded changes in their pain while walking, their physical activity levels, and their "quality of life," among other metrics.

At the end of the study, the researchers found clear and convincing evidence that more stable and supportive shoes were superior for the bodies—and knees, specifically—of aging walkers. And for some reasons why you should definitely be walking more, read about The One Major Side Effect of Going for a Single 1-Hour Walk, Says New Study.

You're Exposing Yourself to More Sun Damage

It's the biggest trade-off to doing any exercise outside: You're seeking the benefits of physical activity while outdoors (which are numerous), and you're putting yourself at greater risk of skin cancer while doing so. "There are some dangers associated with walking a lot, mostly from an environmental standpoint," says Corrie Alexander, PT, an ISSA-certified personal trainer. "For example, going for long walks without proper protection from the sun, or walking in wooded areas in shorts and a t-shirt, which may expose you to ticks."

According to a 2019 study published in Annals of Behavioral Medicine, there is indeed a higher prevalence of sunburn among men who walk outdoors.

You're Putting Your Lungs at Risk

If you're walking for exercise and you want to maximize the cardiovascular benefits, you'd be wise to take your walk to a park and avoid any high-traffic areas with too many automobiles. According to a UK study published in the journal The Lancet, older volunteers (60 and older) who were either healthy or suffered from heart disease were asked to walk down a congested thoroughfare with air pollution or walk through a park with cleaner air. Ultimately the researchers found that short-term exposure to the polluted street "prevents the beneficial cardiopulmonary effects of walking" among all of the participants. "Policies should aim to control ambient levels of air pollution along busy streets in view of these negative health effects," concludes the study.

You're Robbing Yourself of Quicker, More Efficient Exercises

"The biggest downside of walking as a means to achieve your daily exercise goal, is that it is relatively low in intensity," says Alexander. "It is important to remember that the intensity of any activity needs to be progressively overloaded to maintain its benefit to the exerciser."

In any exercise, as you get stronger, systematic increases in the weight are needed to continue to grow muscle and get stronger. "Without equipment, the only way to really increase walking intensity, other than small improvements in speed and incline, would be to increase exercise duration," says Alexander. "At a certain point, the exerciser will be unable to increase the time they walk any more, and the resulting benefits of this activity will begin to diminish." If you're looking to mix up your exercise routine, see why This 10-Minute Total-Body Workout Will Transform Your Body Fast.