10 Things to Learn About Weight Loss from 'This Is Us'

When it comes to obesity and weight-loss, NBC's hit drama "This is Us" gets real about the struggles.

Pass the tissues! NBC's Golden-Globe nominated drama "This is Us" is back after a mid-season break, ready to once again melt us into emotional saps.

In the series premiere, Kate (played by Chrissy Metz), has an emotional breakdown over her weight-loss struggle and vows, "I'm going to lose the damn weight." And we've been cheering our girl on throughout Season 1.

The truth is, more than one-third of U.S. adults are obese, according to the Centers for Disease Control and Prevention. We very rarely, though, see issues of obesity tackled on primetime television. But "This is Us" gives a raw, unfiltered look at weight-loss struggles. (Remember that time Kate purged all the bad food from her fridge, threw it in her curbside trash can, and then tossed a bag of dog poop on it as an extra layer of accountability? Yeah. It's that real). P.S. Here are 30 Fascinating Weight Loss Tricks You Haven't Tried!

While there are lots of engaging, tear-jerking storylines within the show, here's what "This is Us" is getting right about obesity and weight-loss via their beloved characters Kate and Toby. 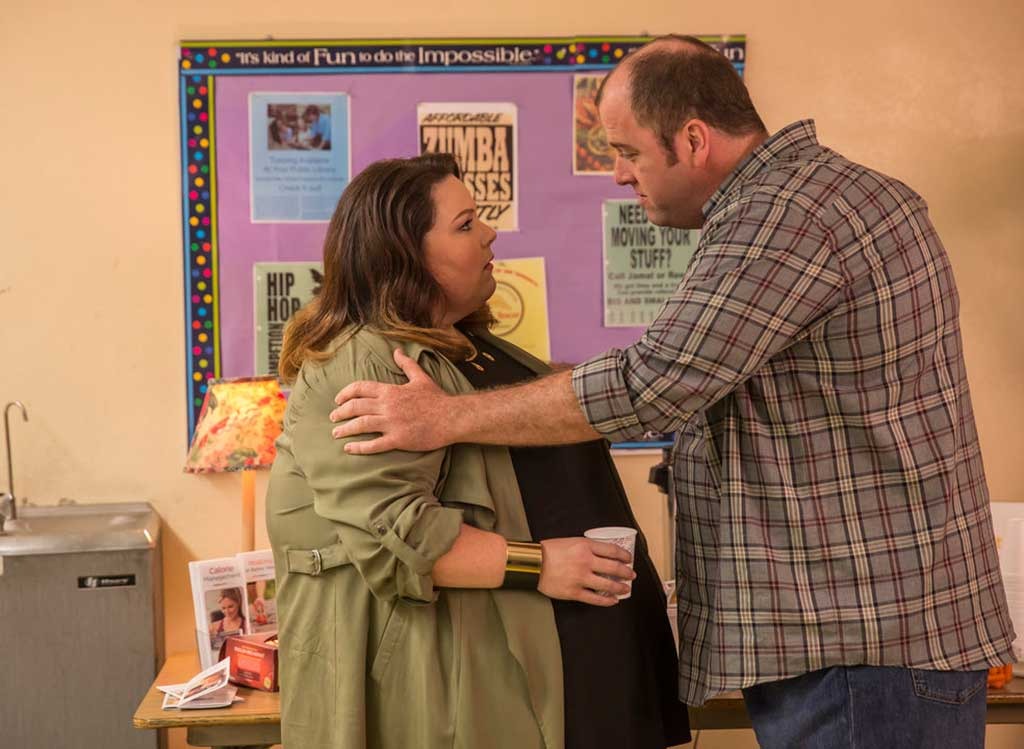 One of the first serious steps Kate takes toward losing weight is joining a weight-loss support group. (The group is also where she meets her boyfriend Toby, a fan fave who brings some much-needed comedic relief to this heavy drama). Science is on her side on this one. A 2013 weight-loss study from the Baylor College of Medicine found that overweight and obese adults enrolled in a group weight-loss program were 8.8 times more likely to lose 10 percent of their body weight than their peers who were told to lose weight on their own.

It's Easier for Men to Shed Pounds 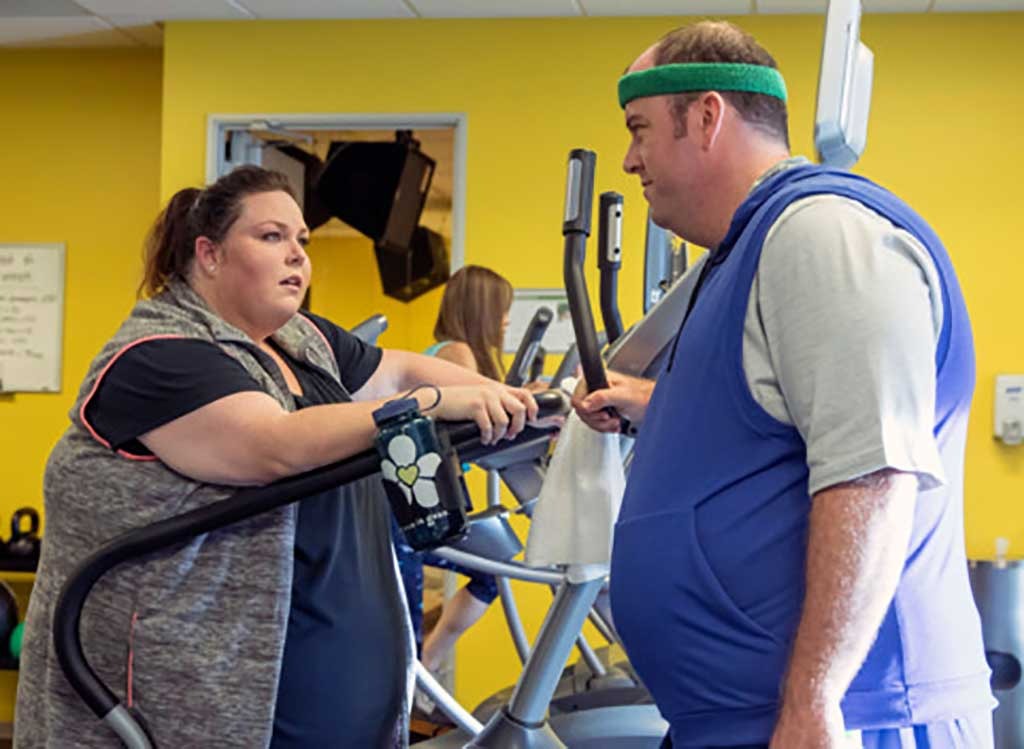 File this under totally unfair: Men have it easier when it comes to weight loss. In "This is Us," we watch Kate sweat it out on the treadmill and work out longer than her BF Toby, who has a much more aloof attitude towards weight loss. She's also much more of a stickler than he is when it comes to following a diet—yet the pounds are melting off Toby while the scale is hardly budging for Kate. What gives? Natalie Rizzo, MS, RD of Nutrition à la Natalie, breaks it down for us. At rest, our bodies burn a certain amount of calories just to keep our organs functioning and our blood circulating, she explains. This is known as "resting energy expenditure." "Women generally have more fat in their body composition and men have more muscle, which means men at rest tend to burn 5 to 10 percent more calories than women burn at rest," Rizzo says. "Unfortunately, that's true even if the man and woman are exactly the same weight and height." 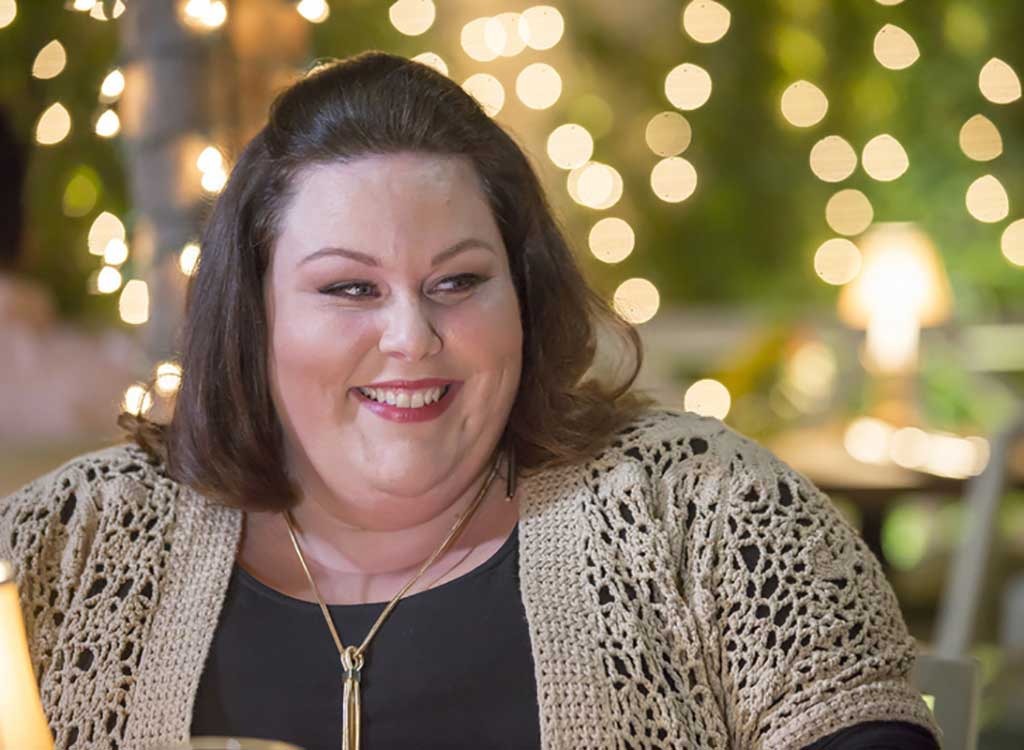 Breakfast in bed is one of life's indulgences and is something we usually associate with syrup-drenched pancakes (and maybe a splash of champagne in that flute of orange juice). But when you're a couple and you're serious about dieting, breakfast in bed involves chia squares topped with hemp seeds—or what Toby jokingly refers to as rectangles of "cardboard." But Kate was looking out for him when she dished out that chia. According to a study by the Institute of Biomedical Research at the National Autonomous University of Mexico, foods like chia seeds can help reduce obesity and even control diabetes (when a part of a balanced diet) because they can calm glucose spikes. These 50 Chia Seed Recipes are ones you'll actually want to eat!

Eat a Snack Before You Go Out on a Dinner Date 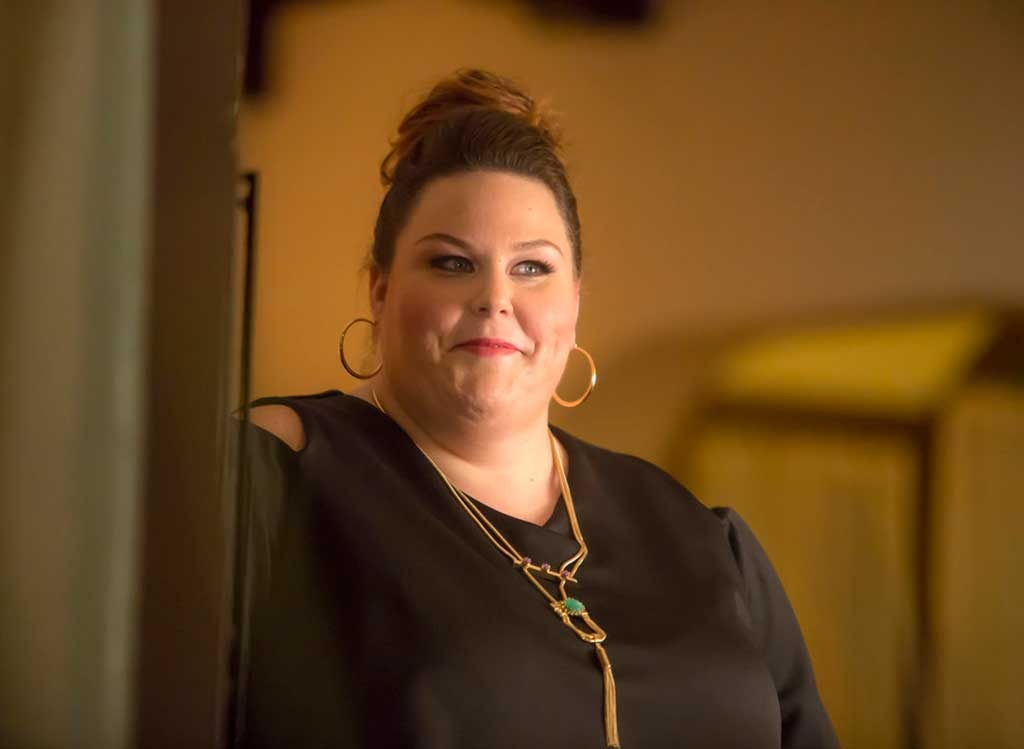 Trying to lose weight while you're dating? From gigantic portion sizes to imbibing with a glass of wine, balancing dieting with dating can be tough, as the show illustrates. It doesn't necessarily have to be, though, if you follow a few suggestions provided by Jennifer Glockner, RDN and creator of Teddy Tries a Veggie. "While trying to lose weight, don't forbid yourself to eat on a date and then binge later secretly like Kate did on 'This is Us,'" Glockner says. Instead, don't go into it overly hungry. "Have a tiny snack beforehand, like a handful of nuts with a fruit or veggie. And then enjoy the meal!" Glockner says. And for some extra credit, take note of these 23 Foods Will Ruin Date Night. 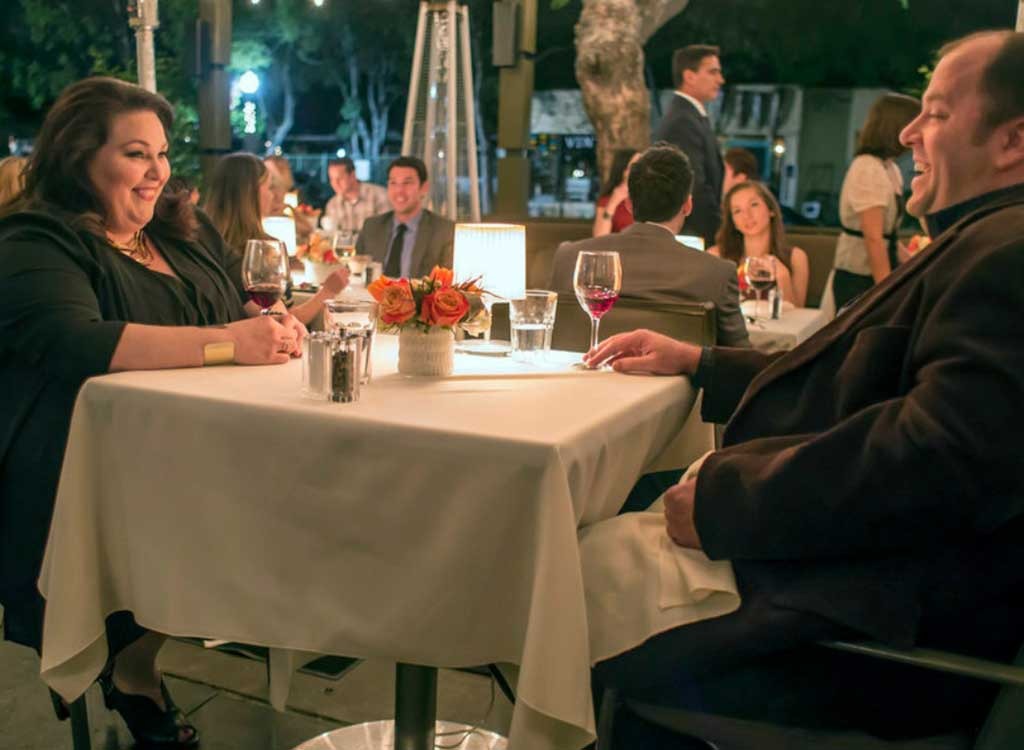 After his first date with Kate, Toby makes a comment about actually liking the risotto because, well, it was deep fried. Restaurants are notorious for tacking on calories by dunking healthy foods in the deep fryer or adding cream. If you're not comfortable pulling out your phone to try to calculate nutrition information, check out the menu beforehand.

A good rule of thumb? "If anything is fried or 'crispy,' it should definitely be avoided," Rizzo says. Her healthy hint? Opt for a fish dish because most usually come with a side of veggies. And in addition to fried risotto, watch out for these 32 Foods with Health Halos! 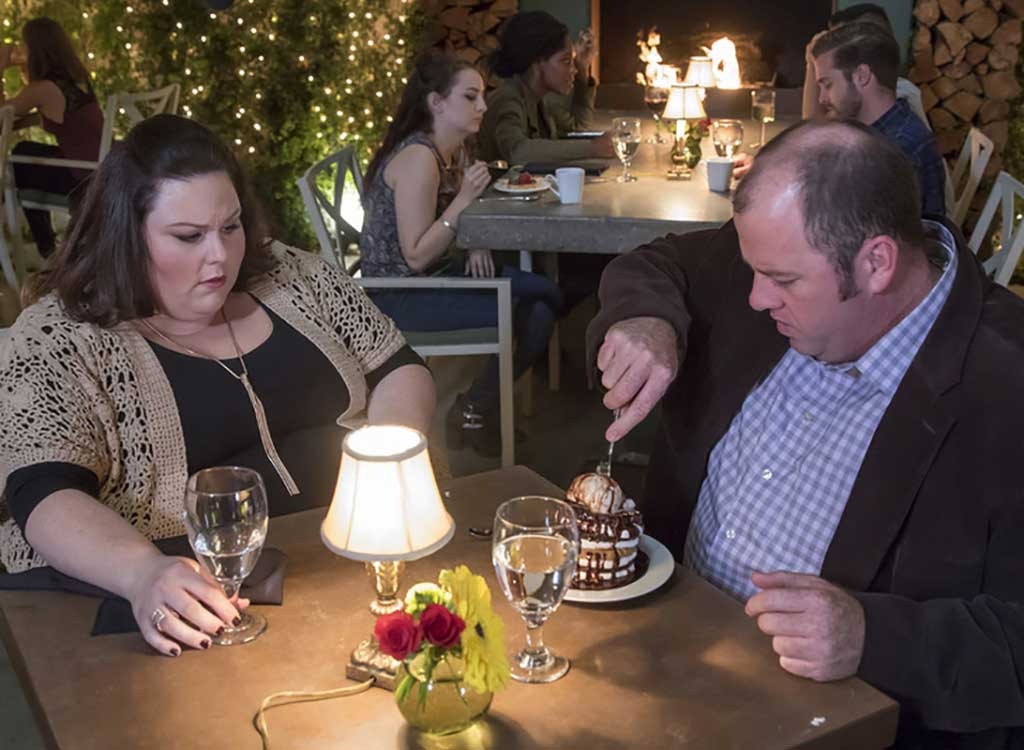 We love Toby for keeping it real and saying what we're thinking. When the dessert cart comes by and the waiter asks, "Can I interest you in dessert?" Kate quickly shuts it down with a "No." Toby quips that he is interested in dessert. "I'm utterly fascinated by dessert," he says. But f you're trying to lose weight, science says it's best to not even flirt with the idea of dessert. In fact, a 2013 study from the University of Cambridge suggests avoiding temptation altogether increases your chances of success compared to relying on willpower alone. The takeaway: Tell the waiter you don't want to see a dessert menu and not to think about steering the dessert cart your way! 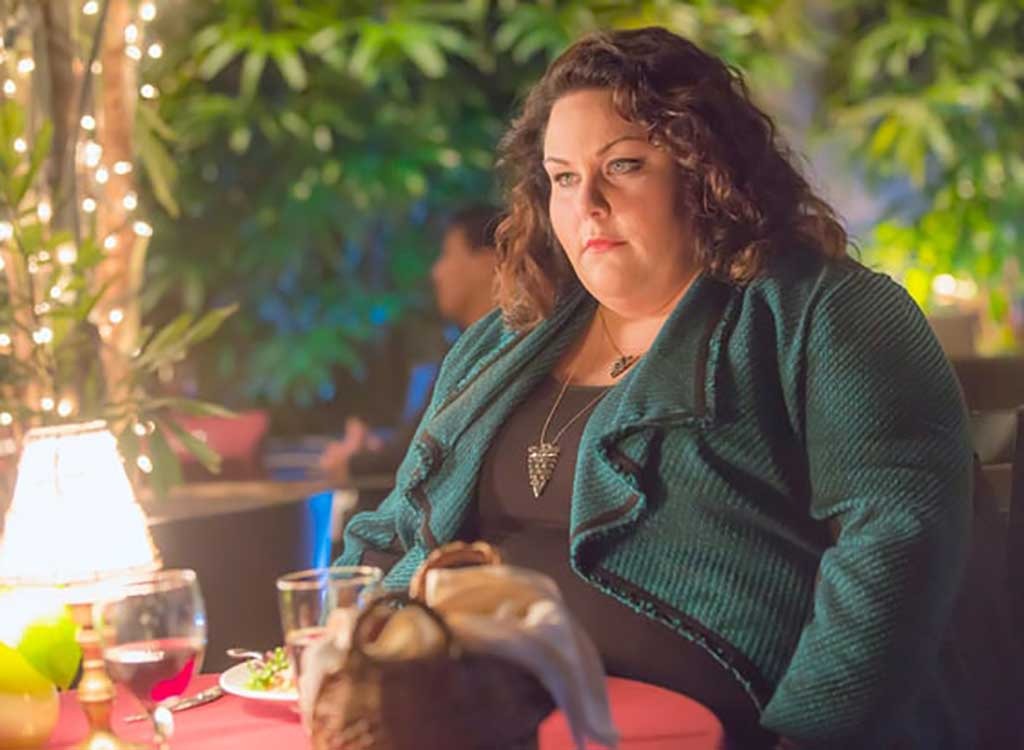 When Kate decides she's going to have bariatric surgery, her family members have major reservations—which is something that's actually quite common, explains Rachel Goldman, a licensed psychologist in New York City specializing in obesity and weight management.

"Many people don't understand bariatric surgery, nor do they understand the struggle when one has to lose that amount of weight. So, the initial response is often negative," says Goldman, also a clinical assistant professor of psychiatry at NYU School of Medicine.

Kate's mother, Rebecca (played by Mandy Moore), accompanies Kate to an initial appointment, and you can just feel the tension in the room. The show gets it right, though. "I always recommend that individuals bring family members or loved ones with them," Goldman says. "The bariatric surgery center and physicians can assist the patient in educating not only themselves but also their loved ones. I always tell patients it's okay if your family or friends don't agree with what you're doing, as long as they support you in whatever you decide." 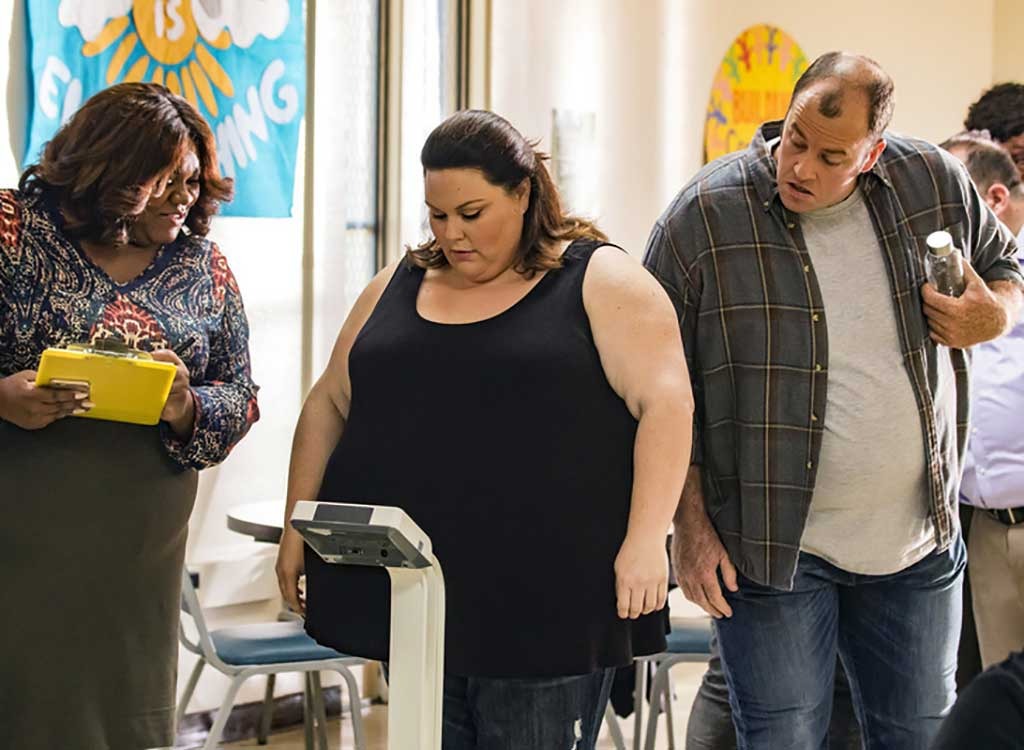 During Kate's visit with the surgeon, we get an honest look at what bariatric surgery entails. A May 2016 study from the University of Leicester found that bariatric surgery patients, who had their stomach size surgically reduced were more physically active and were able to walk further in the year following the surgery. Several previous studies have shown that the surgery can improve, or even resolve, health issues such as heart disease, high blood pressure, Type 2 diabetes, and sleep apnea. Check out these 20 Things Only Formerly Overweight People Know for more insights.6254a4d1642c605c54bf1cab17d50f1e

Heart Attack Patients Are Getting Younger 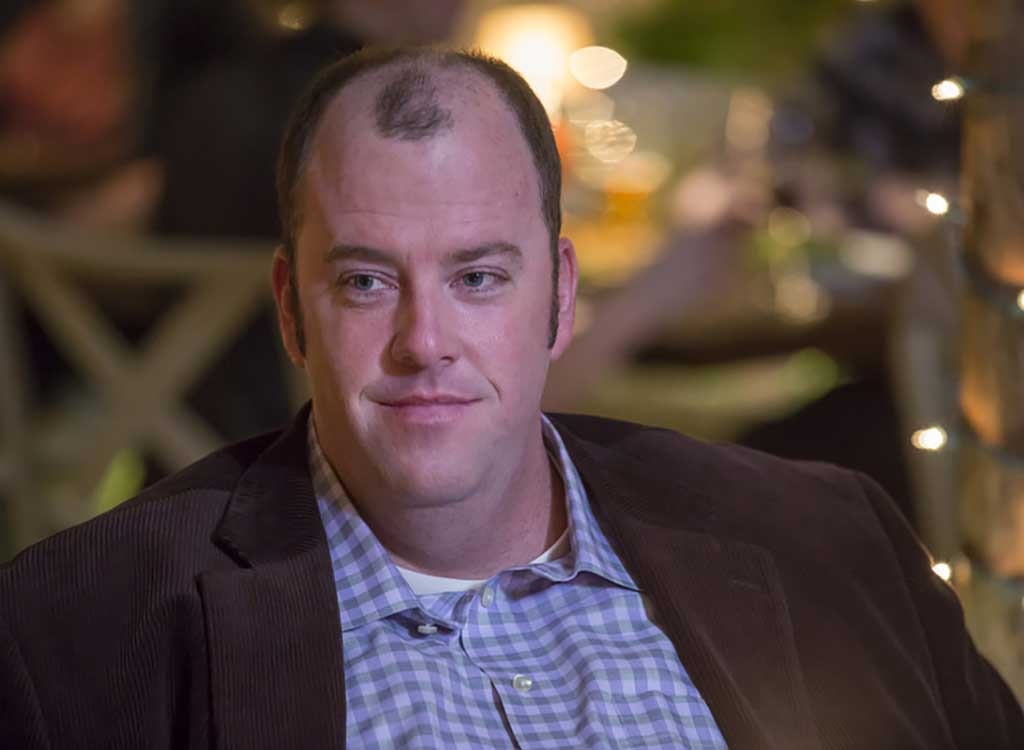 Perhaps the most painful takeaway happens in the mid-season finale during a Christmas Eve gathering: Toby collapses on a living room table in what many presumed was a heart attack. What we know about obesity and heart disease: Nearly 70 percent of American adults fall into either an overweight or obese category, according to the American Heart Association. Being obese puts you at a higher risk for health problems like heart disease, stroke, and high blood pressure. But Toby seems so young, yes? Listen to this, though: A March 2016 study from the American College of Cardiology says that despite more understanding about heart disease risk factors, patients who are suffering the most severe types of heart attacks have become younger and more obese. For the study, the researchers looked at patient records from 1995 to 2014 of those who had suffered from the most severe and deadly types of heart attacks. They found that the average age of the patients decreased from 64 to 60 and the prevalence of obesity increased from 31 to 40 percent between the first five-year timespan and the last five-year span.

Arrhythmia is a Lesser-known Heart Problem 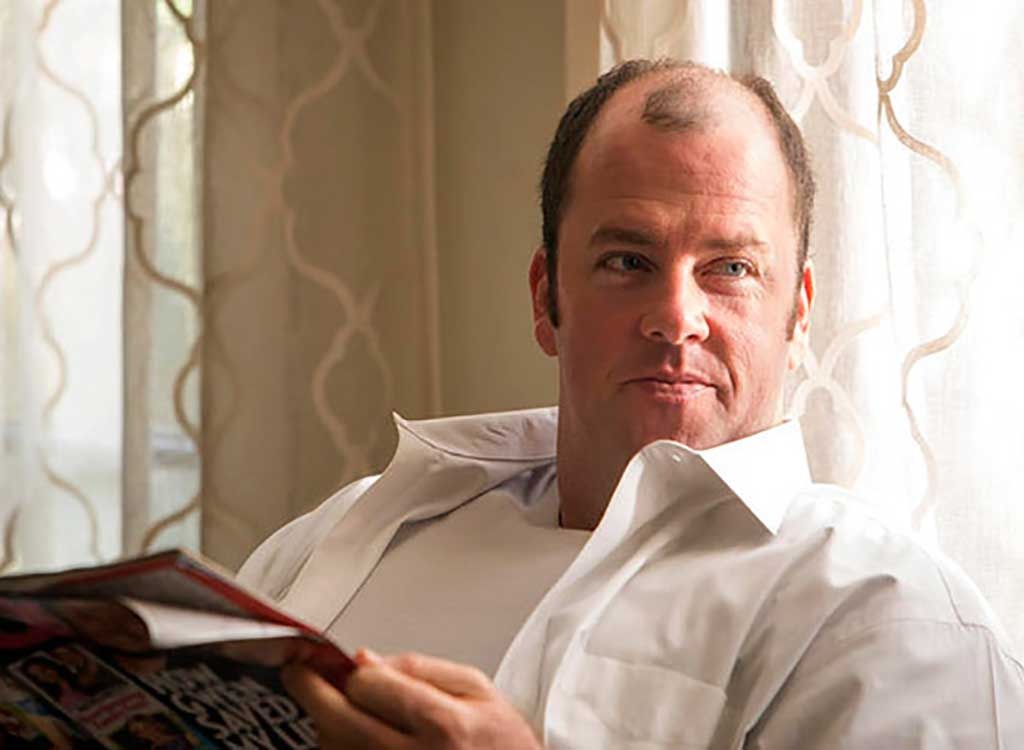 Sigh of relief—Toby is okay. It's revealed his heart attack was caused by arrhythmia, which is an abnormal heart rhythm. For Toby, it was caused by a small hole in his heart, which he decides to go under the knife to fix. The show doesn't delve into other risk factors for arrhythmia, but the American Heart Association recommends a few ways for scaling back your risk. They are: Reducing high blood pressure, controlling cholesterol levels, losing excess weight, eating a heart-healthy diet, quitting smoking if you're a smoker, drinking alcohol in moderation, and enjoying regular physical activity. If you need a cheat sheet, steer clear of these 30 Foods Can Cause Heart Disease!