7 Grocery Items So Unhealthy They Should Come With This Warning

Scientists are calling for implementation of an "ultra-processed" label on foods.

Imagine grabbing a bag of your favorite chips at the grocery store and emblazoned on the front is a warning label stating your snack of choice is "ultra-processed." What does that even mean?

No doubt you've heard whole foods (think fruits, vegetables, lean meats, whole grains, etc.) are a better choice all day, every day. Yet, so many aisles in grocery stores remain dedicated to hundreds if not thousands of shiny, pre-packaged, ready-to-eat "food" items (food is in quotes because many of these products provide zero nutritional value). Other countries, such as Chile, Uruguay, and Israel, have begun implementing nutrient warning labels for products high in fat, sugar, saturated fat, and calories. Still, such a notion has yet to come to fruition in the United States.

However, that is exactly what a recent commentary published in the leading medical journal BMJ said needs to happen to protect consumers from foods that may be harmful to their health. The report, titled, "Warning: ultra-processed — A call for warnings on foods that aren't really foods," stated it's "high time that consumers had the opportunity to see ultra-processed foods for what they are: foods that are not real foods, containing nutrients but not real nutrition, pervasively marketed by supranational companies offering choices that are not real choices."

Ouch. Tell us how you really feel, why don't you?

In response to interview questions, one of the commentary's co-authors, Trish Cotter, senior advisor and global lead of the Food Policy Program at Vital Strategies, said, "More and more consumers are learning that ultra-processed foods contribute to poorer health. These packaged foods can't be made in your home or kitchen, but marketing can make them very appealing and hard to differentiate from healthier foods."

Cotter and her team believe consumers shouldn't have to take time to examine every single nutrition label and ingredients list of products they buy at the grocery store. Instead, these potentially harmful food options should carry a bold "ultra-processed" warning label to "empower consumers to make healthier decisions in real-time."

Meanwhile, obesity, diabetes, some common cancers, heart disease, and more continue to climb year after year, with some experts saying they've reached pandemic levels. The World Health Organization (WHO) estimates that the rate of obesity has nearly tripled since 1975, while diabetes has nearly doubled since 1980. The WHO's statistics also reveal that more than 1.9 billion adults (ages 18 and older) were considered overweight in 2016 and of these, more than 650 million were considered obese.

So, what exactly are ultra-processed foods?

According to a report published by Cambridge University Press in February 2019, ultra-processed foods are not "real food." They are "formulations of food substances often modified by chemical processes and then assembled into ready-to-consume hyper-palatable food and drink products using flavors, colors, emulsifiers and a myriad of other cosmetic additives. Most are made and promoted by transnational and other giant corporations. Their ultra-processing makes them highly profitable, intensely appealing and intrinsically unhealthy."

Ultra-processed foods also contain cosmetic additives including flavors, flavor enhancers, colors, emulsifiers, emulsifying salts, sweeteners, thickeners, and anti-foaming, bulking, carbonating, foaming, gelling, and glazing agents. Basically, ultra-processed foods are products that have low-cost ingredients, a long shelf-life, and they appeal to our senses: sight, taste, smell, and touch. Some experts consider them to be addictive. According to the commentary from BMJ, ultra-processed foods are "foods that can't be made in your home kitchen because they have been chemically or physically transformed using industrial processes."

Dietitian Molly Hembree explained it this way: "One way to think of food processing is how many steps have to be taken from the farm into the form you are eating on your plate. Often some degree of simple processing, such as puréeing pumpkin to get canned pumpkin, flash freezing strawberries to get a bag of frozen strawberries, or forming whole wheat into spaghetti strands is required to produce a quality product."

"But adding numerous ingredients, requiring added sugars, sodium, and fat, as well as incorporating added colors, flavors, and preservatives, often take the food further away from its 'whole' form and diminishes its nutritional value," Hembree concluded.

For more, check out 8 Fast-Food Chains With the Most Toxic Food Packaging.

What products should get a warning label, STAT?

We asked nutrition experts to name some examples of products that should get an "ultra-processed" warning label printed on the front of the package. These were the items they identified.

This is an ultra-processed corn tortilla chip loaded with sodium and containing unhealthy ingredients like MSG, vegetable oils, palm/soy oil, artificial colors, and many ingredients that are not whole/naturally derived, according to nutritionist Amy Shapiro. And we'd bet it isn't the only commercial tortilla chip out there with such a terrible ingredient list.

According to Shapiro, sodas are a high-sugar product that provides "zero health benefits and has been linked to obesity, type 2 diabetes, and other chronic health conditions." With artificial colors, multiple forms of sweeteners and more, she believes sodas are not only inexpensive but they are addictive and unhealthy.6254a4d1642c605c54bf1cab17d50f1e

"Marketed as a healthy snack, this bar contains more than six types of sugar in one bar," warns Shapiro. "Sure, it has 'whole grains,' but it also has guar gum and inflammatory ingredients that make it less than healthy and certainly ultra-processed."

"This product starts with refined wheat flour, adds sugar, a processed sausage link, artificial flavors, and other additives to make this an ultra-processed food," said Hembree. 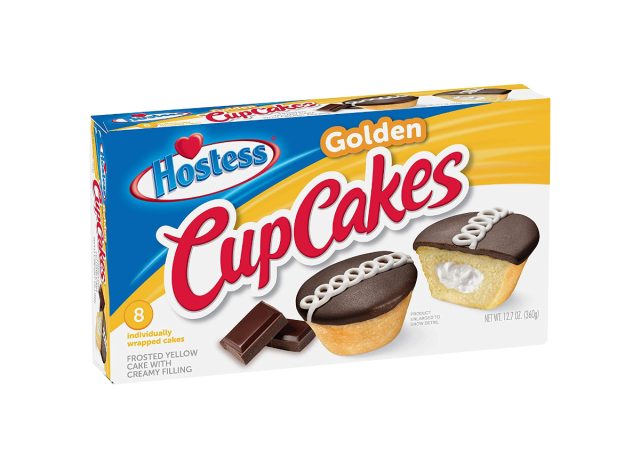 "Most products marketed as desserts are ultra-processed, including this item," Hembree said. "The main ingredient is sugar, followed by more sugar like high fructose corn syrup and corn syrup, then a long list of added oils, gums, colors, flavorings, and preservatives."

With Fruity Pebbles cereal, sugar is the second ingredient and hydrogenated vegetable oil is the third. "They use five different artificial colors and artificial flavors," said Shapiro. Plus, Fruity Pebbles contains the preservative BHA, which has been criticized for being carcinogenic.

Top Ramen definitely checks the boxes for the ultra-processed category, said Hembree. And, while stories have circulated about starving artists and actors living on Top Ramen while they tried to make it big (looking at you, Matt Damon and Ben Affleck), this super-inexpensive product is made with a number of questionable ingredients. These include enriched flour, palm oil, food coloring, silicon dioxide, disodium guanylate, disodium inosinate, hydrolyzed corn protein, and more.

What you can do right now

In addition to calling for warning labels on ultra-processed foods, Cotter and her co-authors are asking for government bodies and health-food advocates to step up and regulate these types of items. In the meantime, there are things you can do to protect yourself.

Shapiro suggested choosing snacks made from whole foods, such as pickles, hummus, nuts, seeds, and trail mix. She said it's best to plan in advance and pack your own snacks so you can avoid purchasing an ultra-processed item.

Hembree said to aim to consume minimally processed foods regularly. She also said it's OK to eat ultra-processed foods on special occasions (everything in moderation, right?). Doing this, "will help in the battle against obesity, heart disease, diabetes, and other chronic conditions," she said.

Cotter said that until warning labels are implemented, she'll "continue looking for foods with five or fewer ingredients that look like something I could make at home, and that's the advice we give others."