Sorry, but filling your sweetie up with gross additives and tons of nutrient-deficient calories doesn't sound so sexy to us. Although it's true that dark chocolate is full of anti-inflammatory antioxidants and has been shown to provide mental and cardiovascular benefits, these bonuses don't extend to the low-quality candies you mindlessly pick up in a drugstore on your way home from work.

It may appear like a well-intentioned gesture, but your bae isn't going to be happy with you once they read these nasty facts about certain Valentine's Day candies. There's nothing worse than knowing that indulging in a sweet gift is really one of the 50 Little Things Making You Fatter and Fatter. We vote that you stick to the flowers, spa treatments, and homemade cards instead.

Most of It Is Made With Alkalized, or "Dutch," Chocolate

Cocoa powder is naturally acidic, and this can be a major flavor turnoff for many people's palates. Thus, most American candy manufacturers process their cocoa with alkali, a process known as alkalizing or "Dutch processing" the chocolate. This results in a more mild-tasting, neutral cocoa. There's just one problem: this technique significantly reduces levels of the main antioxidant that lends its anti-inflammatory properties to chocolate. And when we say significantly, we're talking a nearly 90 percent decrease in these flavanols, according to a study published in the Journal of Agricultural and Food Chemistry. So don't try to justify another piece by referencing chocolate's known benefits.

Sorry, but Chocolate Is Probably Not an Aphrodisiac

Unless you're eating super dark chocolate, which may help turn you on, don't rely on that box of wax-coated chocolates to be a libido-booster. Most factory-made chocolates are low in the antioxidants that can increase your energy and sexual desire, and chocolate isn't the magical aphrodisiac we think it is. In fact, according to a 2006 study published in The Journal of Sexual Medicine, when adjusted for age, women who reported high chocolate consumption had similar levels of sexual desire and satisfaction than those who reported low chocolate consumption.

White Chocolate Is Barely Even Chocolate 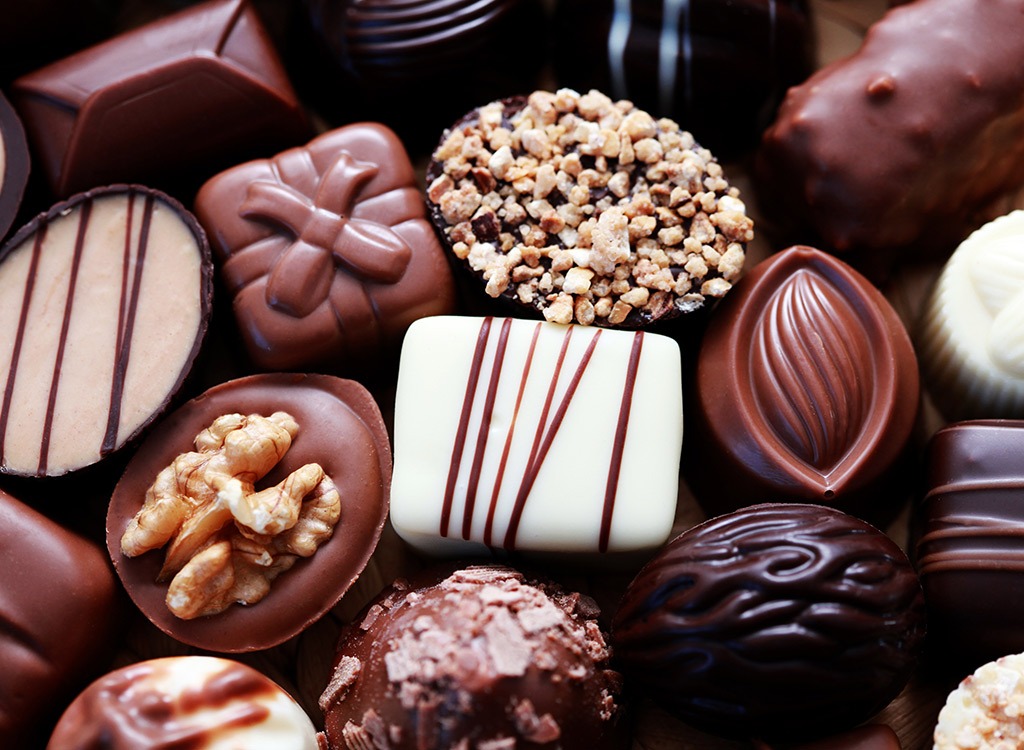 White chocolate is a little like white, refined flour: they're both over processed and devoid of nutrients. The only "chocolate" part of white chocolate is cocoa butter (the rest of the treat is milk solids, milk fat, and a sweetener), and even that ingredient typically loses any traces of antioxidant properties during a "deodorizing" step. Without the dark cocoa solids, white chocolate doesn't contain any antioxidant flavanols or gut-healthy prebiotics, which help reduce inflammation and fight weight gain. It also lacks the ability to stimulate the euphoria-inducing chemicals that real chocolate does, including serotonin. 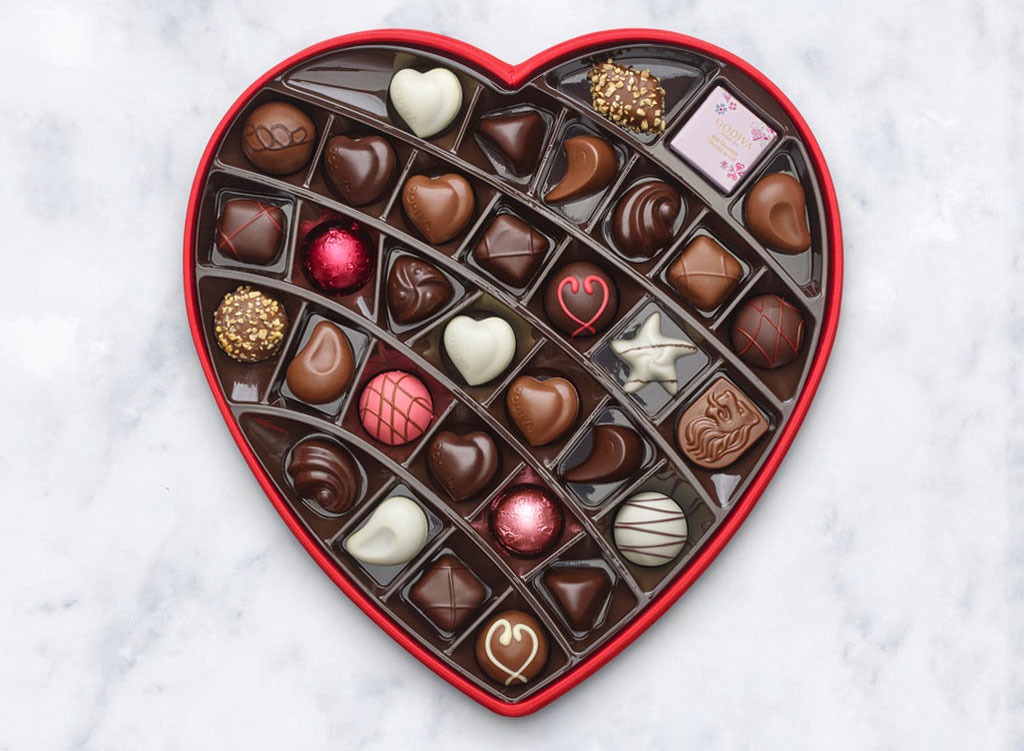 Don't worry, you're not alone in feeling out of control when gifted a chocolate box. It's a combination of construction and the nature of chocolate itself. First, the variety of flavors entices you to try each one and eat more than you had planned. Second, the combination of sugar and cocoa in chocolate make it hard to stop yourself from going back for seconds. According to a 2011 Drexel University study, this dynamic duo is extremely addictive, and just tasting chocolate can trigger feelings of euphoria, just like addictive drugs can. As a result, you may feel a loss of control when gifted with a box. Even if a food is considered healthy, portion control is still key. Overdoing it is one of the 40 Habits That Make You Sick and Fat.

You May Get a Stomachache

You didn't plan for this to happen, but as we just explained, it's almost too easy to overeat those creamy chocolates. Whether it's because they're bite-size, downright delicious, or we get caught up in the holiday-esque moment of Valentine's Day, many of us can miss certain satiety cues that we've eaten enough. As a result, you could suffer from the post-overindulgence stomach ache of pain, gas, and indigestion.

You Might Experience Acid Reflux if You Eat Too Much 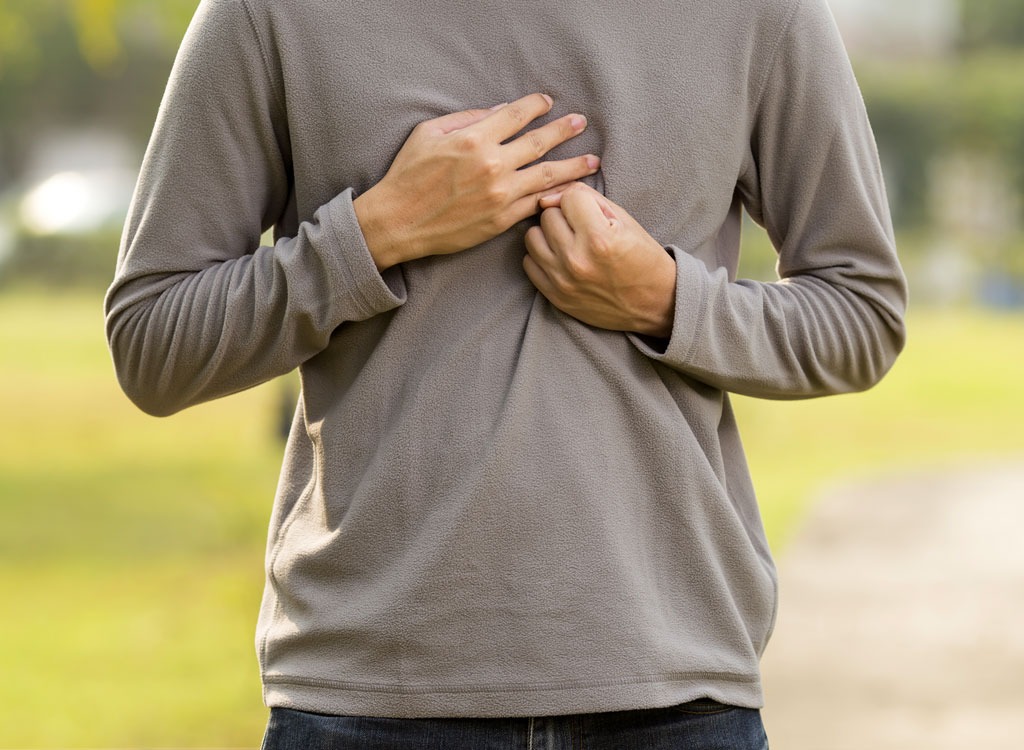 It's unfortunate but true. Chocolate is one of a group of foods that causes your lower esophageal sphincter (a muscle that normally works to keep the acid down in the stomach) to relax. As a result, it causes the acidic stomach contents to travel back upwards and gives you a burning sensation in your chest, aka heartburn. It's all thanks to two compounds in chocolate, caffeine and theobromine, which weaken your lower esophageal sphincter. Something tells us having chest pains wasn't on your checklist of sexy V-day activities.

You're Eating More Sugar Than Chocolate

After looking at all the popular Valentine's Day candy sold in drug stores, we found that the average serving size of chocolate contains over 21 grams of sugar. Although serving sizes range from one piece to three, when we took a look at nutritional information per gram of candy, most pieces of chocolate were made up of more than 50 percent sugar. In other words, you're eating more sugar than you are chocolate. That's not so sweet if you ask us.

High-Sugar Chocolates Can Harm Your Immunity 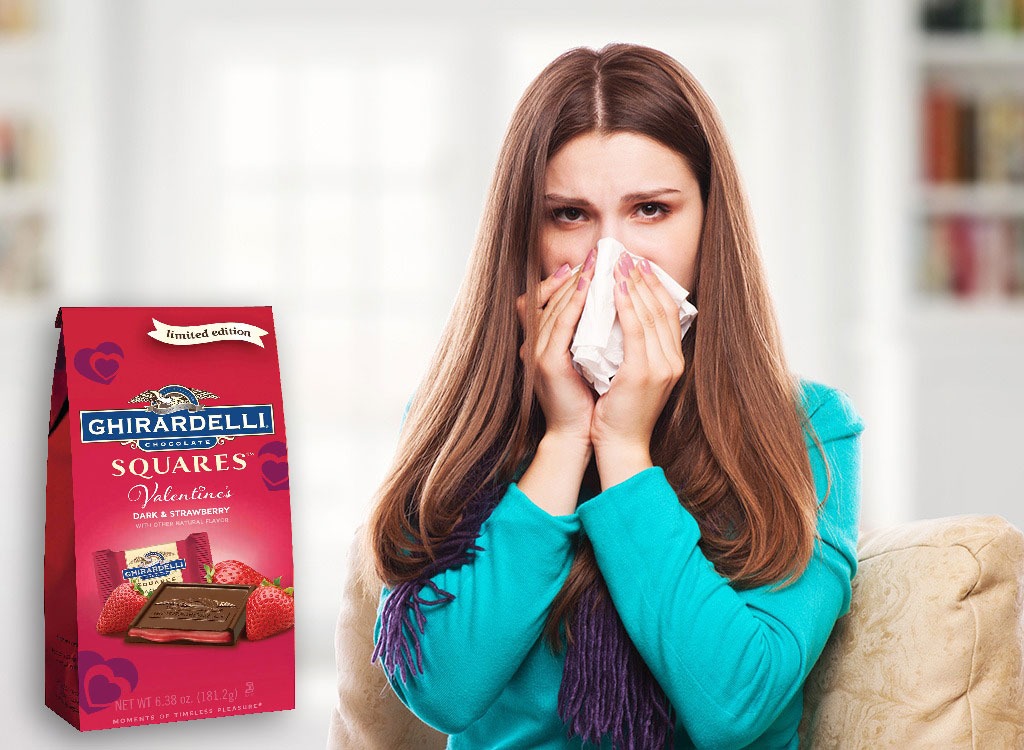 Since chocolate is so bitter, manufacturers love adding sugar to it. But sometimes, they go a bit overboard. Consider this: If you eat just 10 pieces of Ghirardelli's Dark & Strawberry squares (three times the recommended serving size, but hey, it could happen), you'll be consuming just shy of 100 grams of sugar. It sounds extreme, but a 2015 study found that consuming this amount of sugar could drastically decrease the number of white blood cells (your immune system's first responders) in your body. Even if you don't eat a whopping 100 grams in a single sitting, just eating the three squares will set you back 29 grams of sugar or 58 percent of your recommended daily intake of added sugars per day. Too much of the sweet stuff can lead to issues that range from dental cavities to insulin resistance and metabolic disease.

You'll Consume a Lot of Calories

Thanks to being high in fat and sugar, chocolate is usually very high in calories. And you know the drill: eat more calories than you burn and you can pack on the pounds. That being said, one day of indulgence isn't likely to break your clean-eating streak. If you do feel like you went a little overboard, however, don't miss these 15 Easy Ways To Reset Your Diet.

You May Be Consuming a Carcinogen…

Palm oil, a vegetable oil that contains mostly saturated fats but also polyunsaturated fats, comes from the palm fruit. Although a well-researched 2015 review published in the journal World Journal of Cardiology found that palm oil can be consumed as part of a healthy, balanced diet without concern of its limited effects on cholesterol levels, a different conclusion was reached by the European Food Safety Authority (EFSA, similar to the U.S.'s FDA). In May 2016 and after reviewing a study published in the world-renowned journal Nature earlier that year, the organization claimed that palm oil "generated more of a potentially carcinogenic contaminant [palmitic acid] than other vegetable oils when refined at temperatures above 200 degrees Celsius." The EFSA did not recommend consumers to stop eating it—yet—and are now looking into the potential risks.6254a4d1642c605c54bf1cab17d50f1e

…Or a Banned Substance 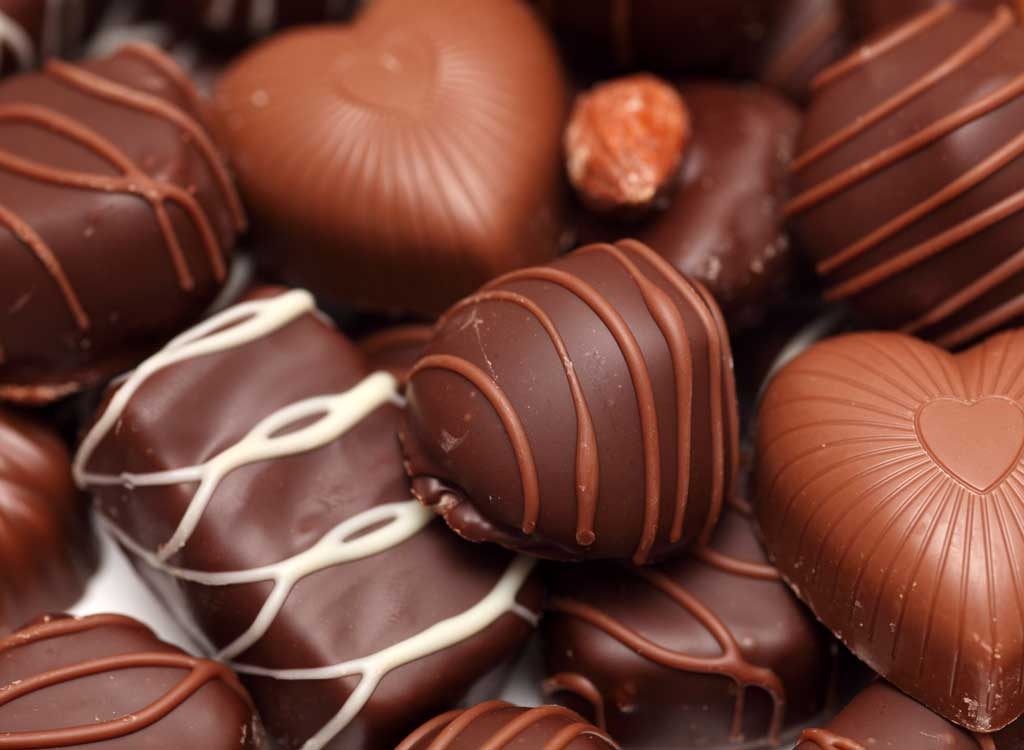 A few V-day heart-shaped boxes (like those from Russel Stover and Elmer) still list partially hydrogenated oil (PHO) among their long list of artificially-manipulated ingredients. In this case, you can see the heart-shaped box as a sign that you should watch your heart health. PHO is a type of man-made trans fat that the FDA has banned from being used in our food beginning in 2018.

You're Not Eating Quality 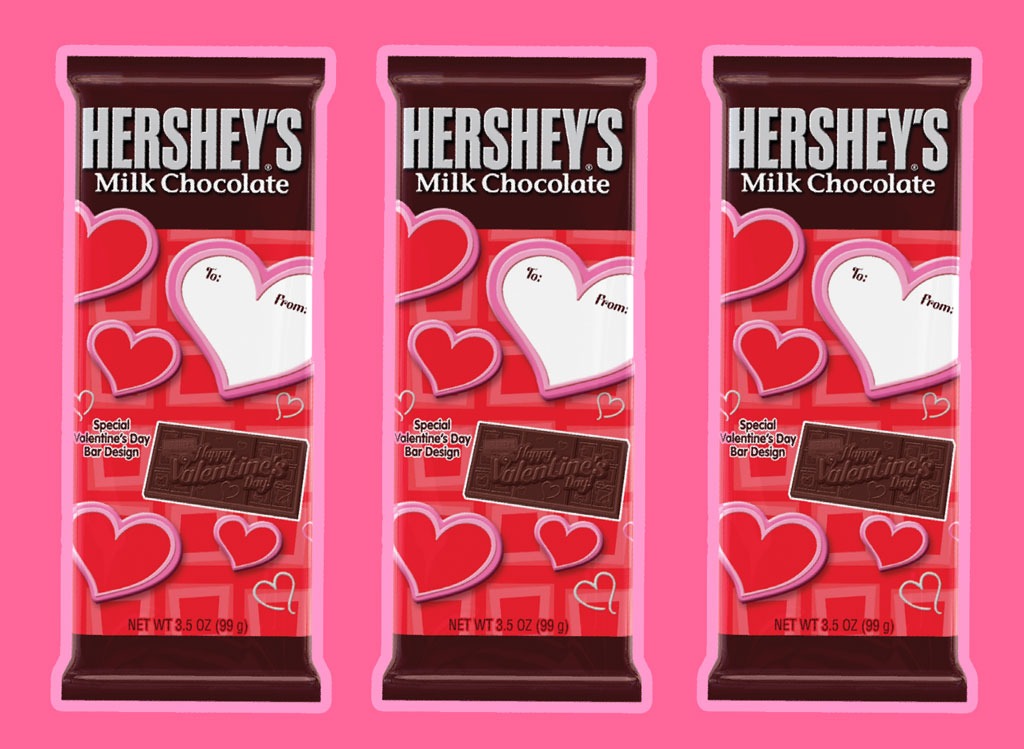 If your standards are high for your partner, you should at least maintain those high standards for the candy you're about to gift him or her. Candies like York Peppermint Patty Hearts and Hershey's XOXO bars contain an ingredient called PGPR in their bite-size candy bars. Instead of using high-quality cocoa butter as a fat and emulsifier, lower-grade candy bars use PGPR (Polyglycerol polyricinoleate): a yellowish, viscous liquid of fatty acids. It's cheaper to manufacture the candy with this ingredient than to use the real stuff, so the quality gets sacrificed for quantity in this situation. You know what else isn't quality? These 150 Worst Packaged Foods in America.

You Could Be Eating Insects or Mouse Poop and Hair 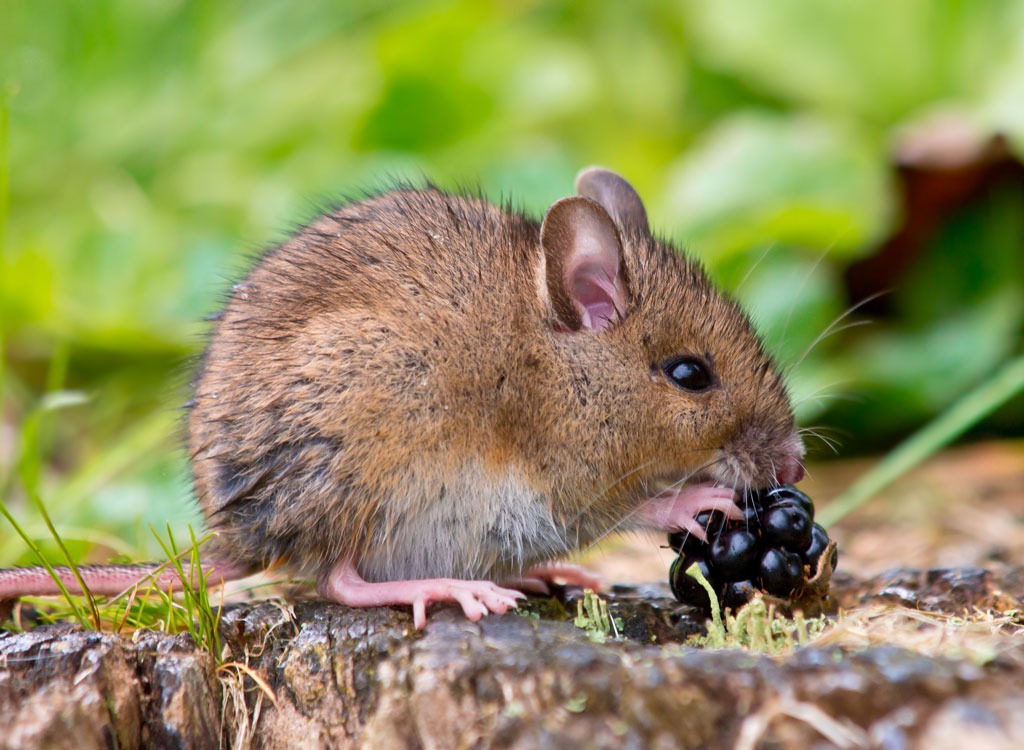 Excuse our language, but yes, the FDA actually allows mouse poop in your food—although, they do use a pretty scientific term for it, "mammalian excreta." According to their guidelines, trace amounts of the brown stuff, up to 10 mg per pound, can be found in cocoa beans. At least you can take solace in knowing there are over 450,000 milligrams in a pound, so that's a very small fraction. Additionally, you're only allowed a single rodent hair per 100 grams. That's comforting—we guess. Want to be grossed out even more? The FDA has a pretty lax upper limit on insect pieces: 60 insect pieces per 100 grams of chocolate. Apparently, an average chocolate bar contains 8 insect parts. Yuck. Part of this gross fact makes sense, though, since cocoa beans are harvested and then fermented on-site outside in large wooden vats.

Your Sugar-Free Chocolate Can Be a Laxative

Think you're safe having just one more of those sugar-free chocolates? Think again. Because chocolate is already high in calories thanks to the energy-dense cocoa butter or vegetable oils added to emulsify the cacao solids into a creamy bar, many manufacturers opt to include zero-calorie sweeteners like maltitol. When eaten in excess (which can be likely when you think a food is "healthier" for you since it doesn't have sugar), this sugar alcohol effectively acts as a laxative and can cause stomach pain, excessive internal gas, and flatulence. That just put a damper on your night. If you are looking for certain treats that help you move things along, take a look at these 23 Foods That Make You Poop.

Eat This, Not That!
Inspired by The New York Times best-selling book series, Eat This, Not That! is a brand that's comprised of an award-winning team of journalists and board-certified experts, doctors, nutritionists, chefs, personal trainers, and dietitians who work together to bring you accurate, timely, informative, and actionable content on food, nutrition, dieting, weight loss, health, wellness, and more. Read more about Eat This
Filed Under
Chocolate // Valentine's Day