Yes, even non-vegans are going to love these tasty treats.

By Erica Sweeney
This post contains affiliate links. If you use these links to buy something, we may earn a commission.

Vegan ice cream is a popular sweet treat for those with dairy allergies, those embracing a plant-based or vegan diet, or anyone looking for an alternative to traditional ice cream. These days, there are more vegan ice cream options than ever, with products made with different types of non-dairy milk and in an abundance of flavors.

What to look for when shopping for vegan ice cream

Still, Ann Ziata, a chef-instructor in the recreational program at the Institute of Culinary Education, urges anyone shopping for vegan ice cream to review the products' ingredient lists and nutritional information before making a purchase.

"Ice cream is fat and sugar," Ziata says. "I would look for things that are recognizable and that are high in fat because that means it's going to taste good."

In other words, this isn't the time to embrace a low-fat diet. If you want a plant-based option that's going to mimic the taste of actual ice cream, a higher fat content is your best bet.

Is there a difference between vegan ice cream and dairy-free ice cream?

Vegan ice cream and dairy-free or non-dairy ice cream are often used interchangeably because most of the time any dairy-free frozen dessert will also be vegan. The only way a dairy-free pint wouldn't be vegan is if it had honey in it, but we haven't come across any pints like that. If you're looking for dairy-free pints, we also put together a round-up of the 14 Dairy-Free Ice Cream Brands That Are Changing the Game.

When coming up with our list of vegan ice creams, we skewed on including pints that are more plant-based in that they feature more fruits and vegetables and fewer milk alternatives. (Although, you'll find those included in this list as well as the dairy-free list.)

What are the best vegan ice cream brands? 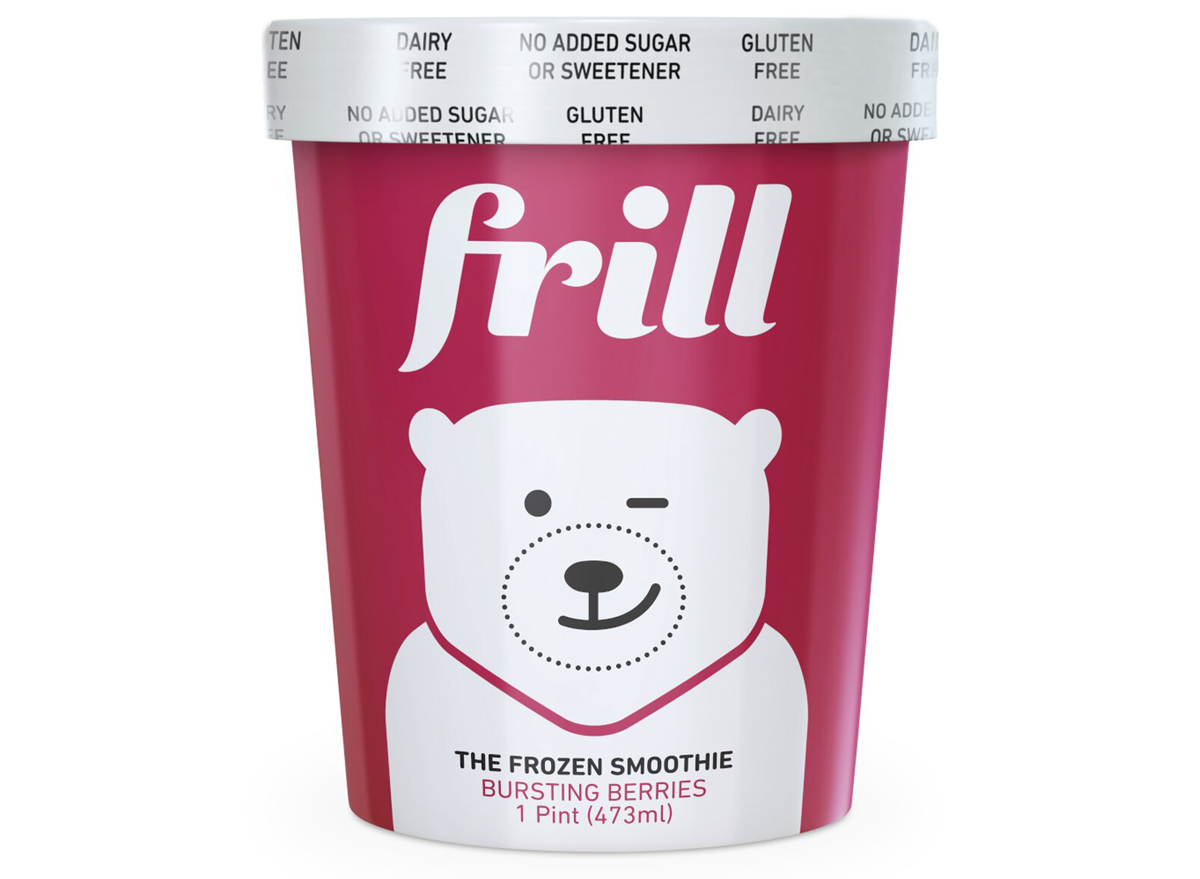 Looking for your daily dose of fruits and veggies? You'll be surprised to hear that you can get it in a frozen form! Frill combines six fruits—including blackberries, raspberries, banana, and pineapple—with beetroot and a fiber blend to create a creamy vegan ice cream, or what they call a "frozen smoothie."

She prefers vegan ice cream made with coconut milk because the saturated fat content is the most similar to heavy cream when compared with other non-dairy milk alternatives. Soy, almond, or cashew milk makes for icier and not-as-creamy desserts, Ziata says. 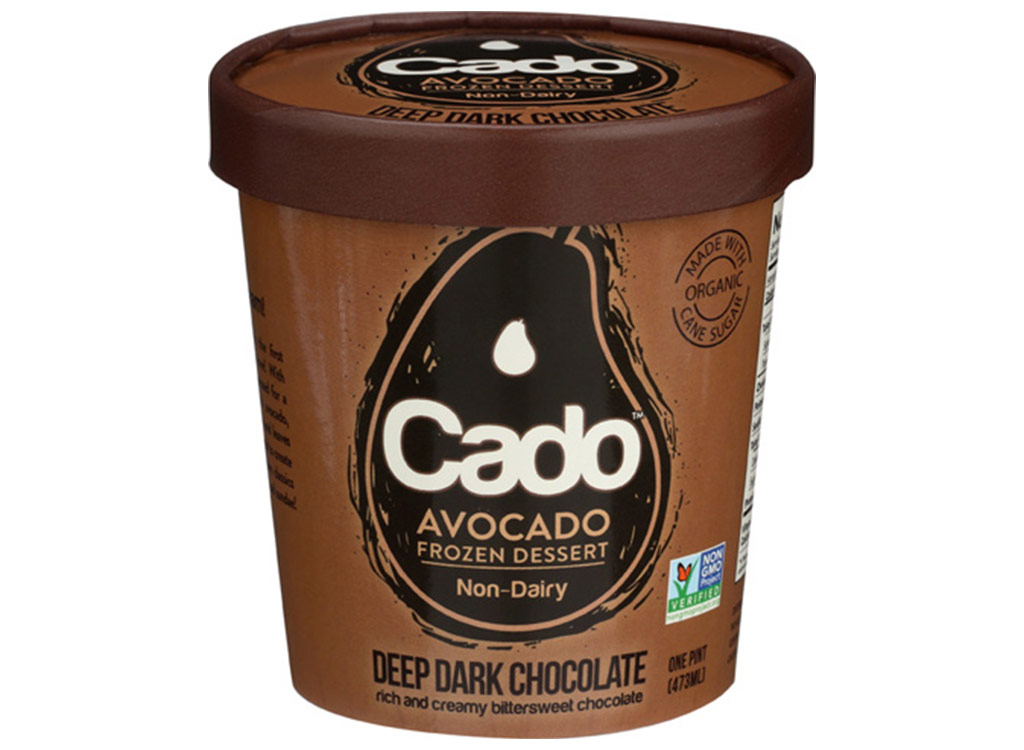 When news hit that Whole Foods stocked up on this insanely rich, dairy-free ice cream, it quickly became one of the most sought-out pints in the avocado-obsessed wellness world. Unlike other dairy-free ice creams out there that use nut milk or fruit as their base, Cado's ice creams are purely made with organic avocado puree. The deep chocolate flavor also features organic cocoa powder, vanilla extract, sea salt, and some cane sugar. 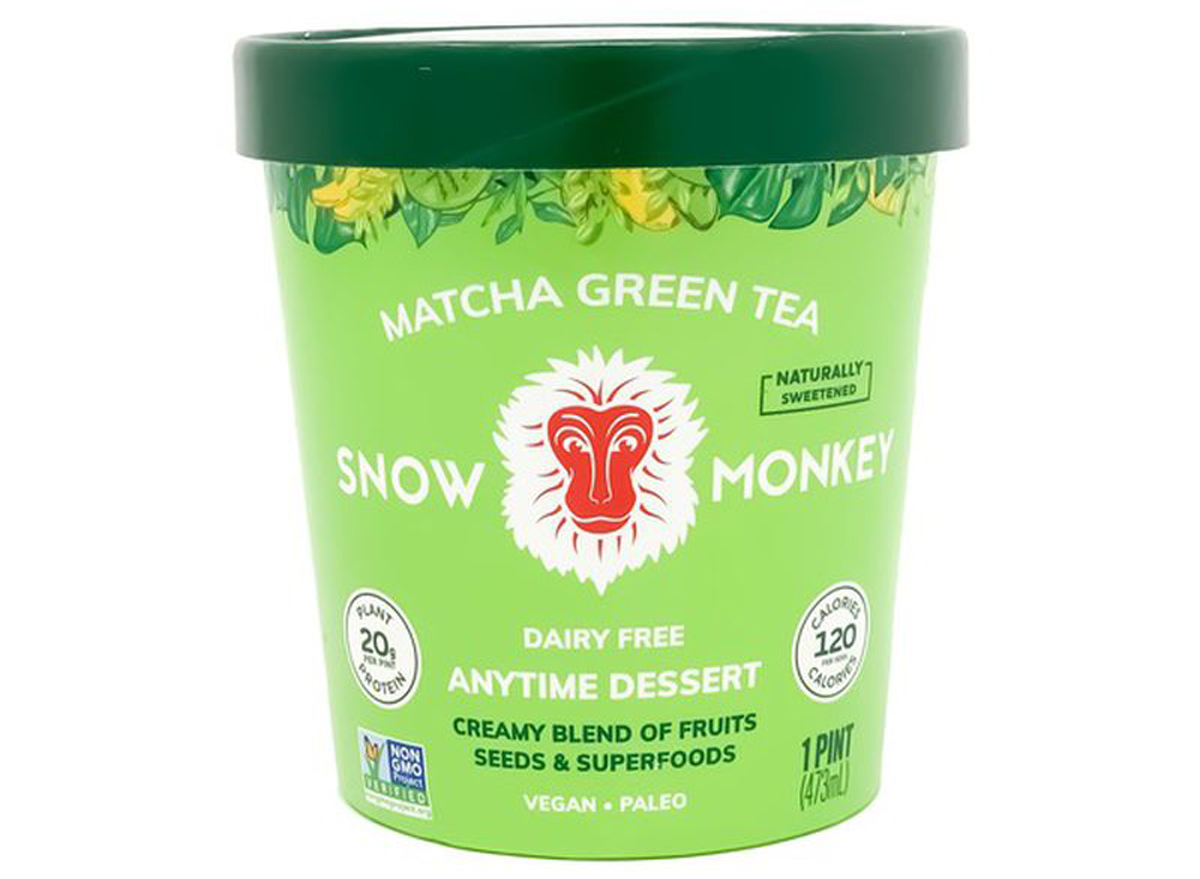 In the past decade, matcha has become one of the biggest health food trends—and there's a good reason for it. Matcha has 137 times the amount of EGCG (epigallocatechin gallate), powerful cancer-fighting antioxidants than regular green tea. Pureed frozen bananas and apples keep this frozen treat sweet and creamy, so it doesn't have that much added sugar. It's also infused with some hemp seed protein powder to deliver you some of the hunger-curbing, muscle-building macronutrient.

"Vegan ice cream is what turned me vegan," says Mazeratie Sweet, vegan recipe developer, content creator, and founder of This Is Not a Blog. Because of a lactose sensitivity, she cut out dairy a year before converting to veganism. Ben & Jerry's non-dairy Cherry Garcia is one of her favorites. She calls it a classic and says it has "just the right ratio of creaminess to sweetness."6254a4d1642c605c54bf1cab17d50f1e

RELATED: The science-backed way to curb your sweet tooth in 14 days.

These vegan ice cream sandwiches pair soy-based ice cream with chocolate wafers. Sweet said she finds the chocolate-vanilla combination nostalgic. "It immediately takes me back to elementary school recess," she says. If you're looking for that old-school taste in a dairy-free format, these sandwiches are perfect. 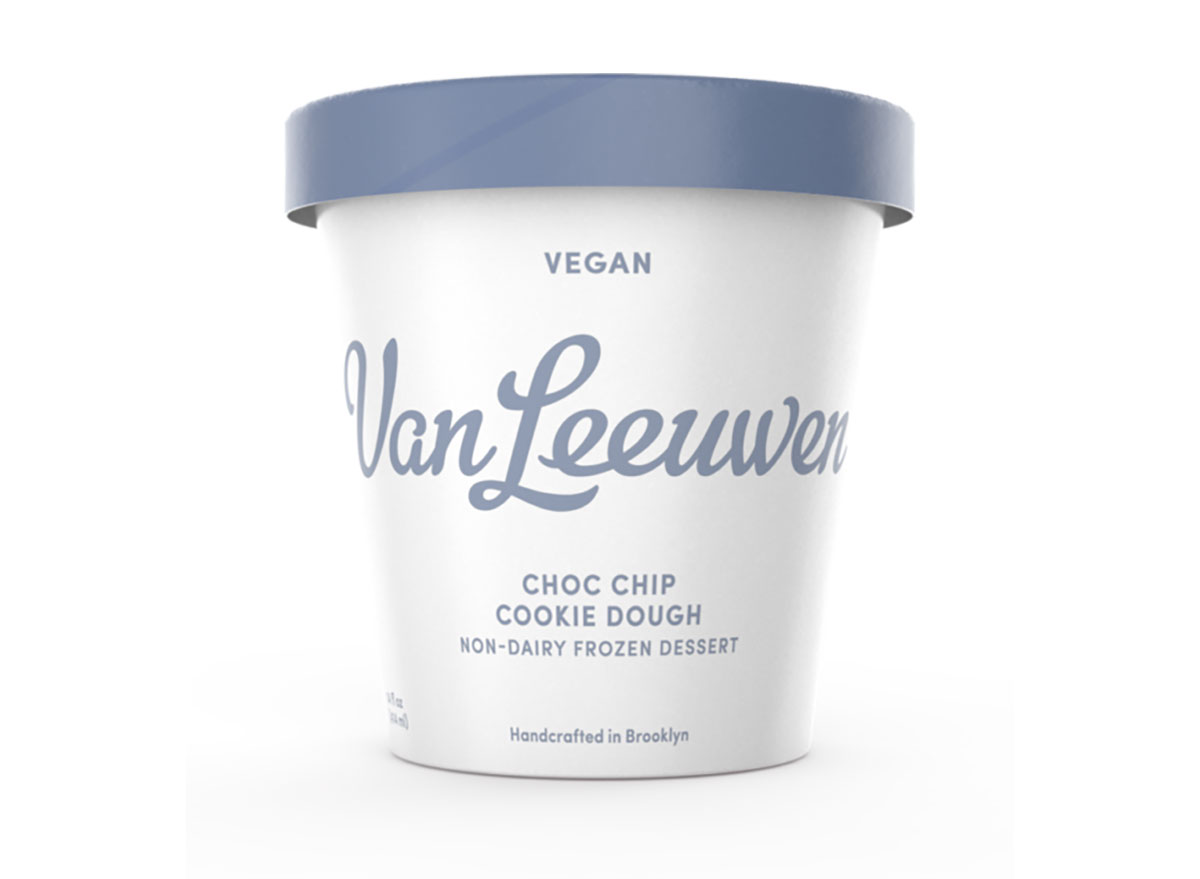 While the company has shops and ice cream trucks in New York and Los Angeles, its products can also be ordered online. 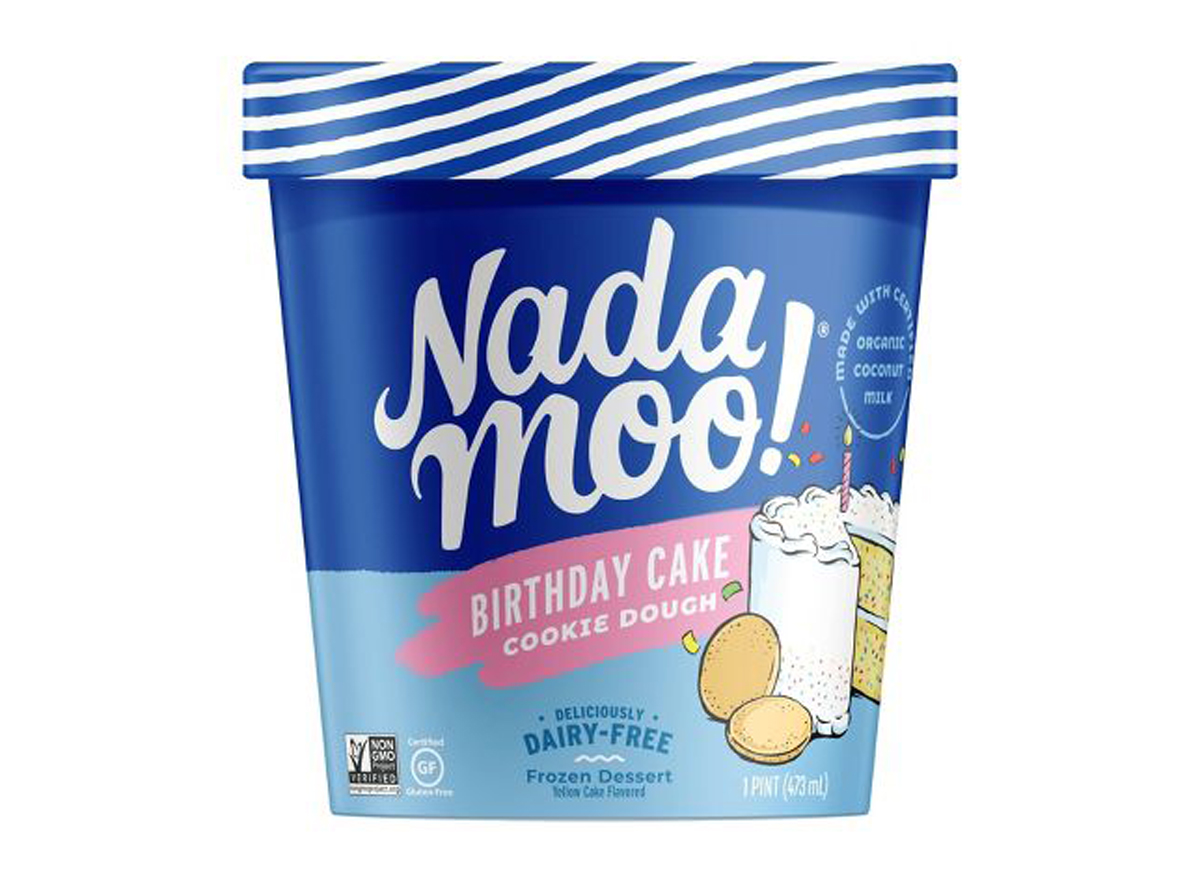 The dairy-free ice cream also comes in flavors like vanilla and birthday cake, and it's sold in grocery stores nationwide. 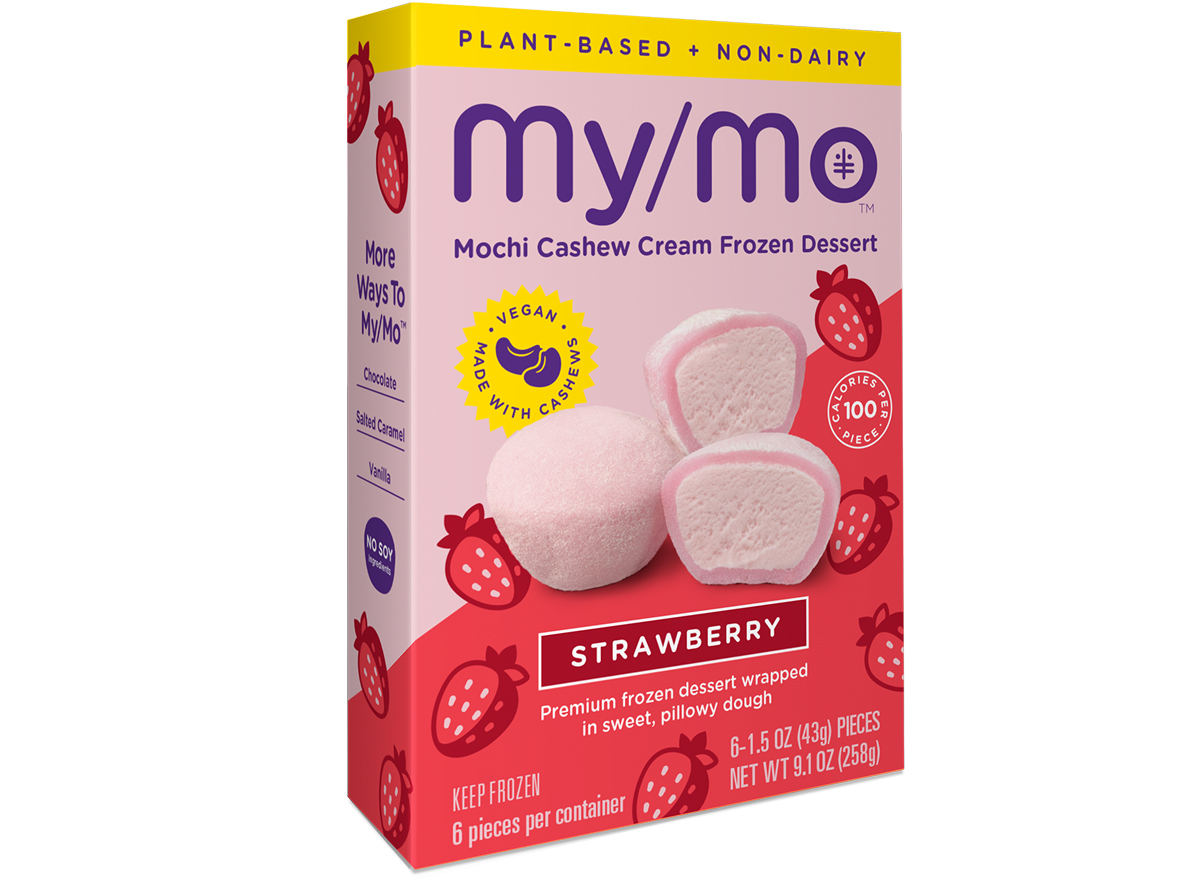 If you're not familiar with mochi, it's a Japanese rice ball dessert that's usually consumed for good fortune and wealth in the New Year. Thanks to My/Mo Mochi Ice Cream cashew cream frozen treats, dairy-free folks can enjoy this bite-sized treat any time of year. At 100 calories, 2 g fat, and 14 g of sugar a pop, this vegan-approved dessert will satisfy your cravings for something creamy and fruity. (Just make sure to keep to one bite if you want to manage your sugar intake.) The ice cream filling features cashew milk, strawberry puree, and beet juice (for color), while the chewy dough that encases it has sweet rice flour, sugar, corn syrup, and beet juice.

Teen vegan and chef Doris Zeger says she enjoys the contrasting textures of the vegan mochi treats, with a chewy outer dough and a sweet ice cream filling. Her favorite flavor is the salted caramel, but My/Mo offers several vegan flavors. 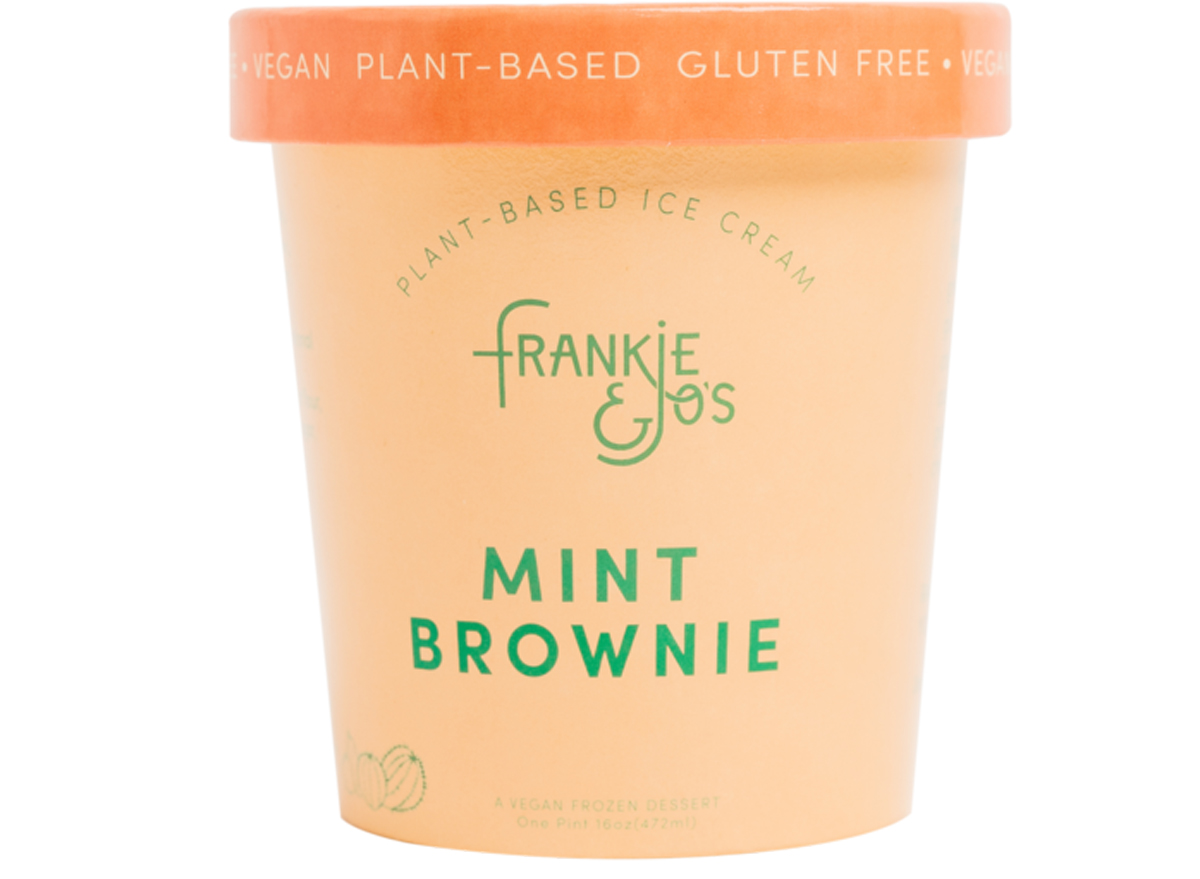 Taylor Wolfram, a vegan registered dietitian, lists Frankie & Jo's as one of her favorite vegan ice cream brands. The company has ice cream shops in Seattle, but its products are available online, too.

Frankie & Jo's features ice cream made from cashew and coconut milk in a variety of unique flavors, like Salty Caramel Ash, Gingered Golden Milk, and more.

Jones said this vegan ice cream offers a balance of textures from the "snap of the chocolate coating, the crunch of the oatmeal cookies, and the cooling mint ice cream sandwiched in the center." 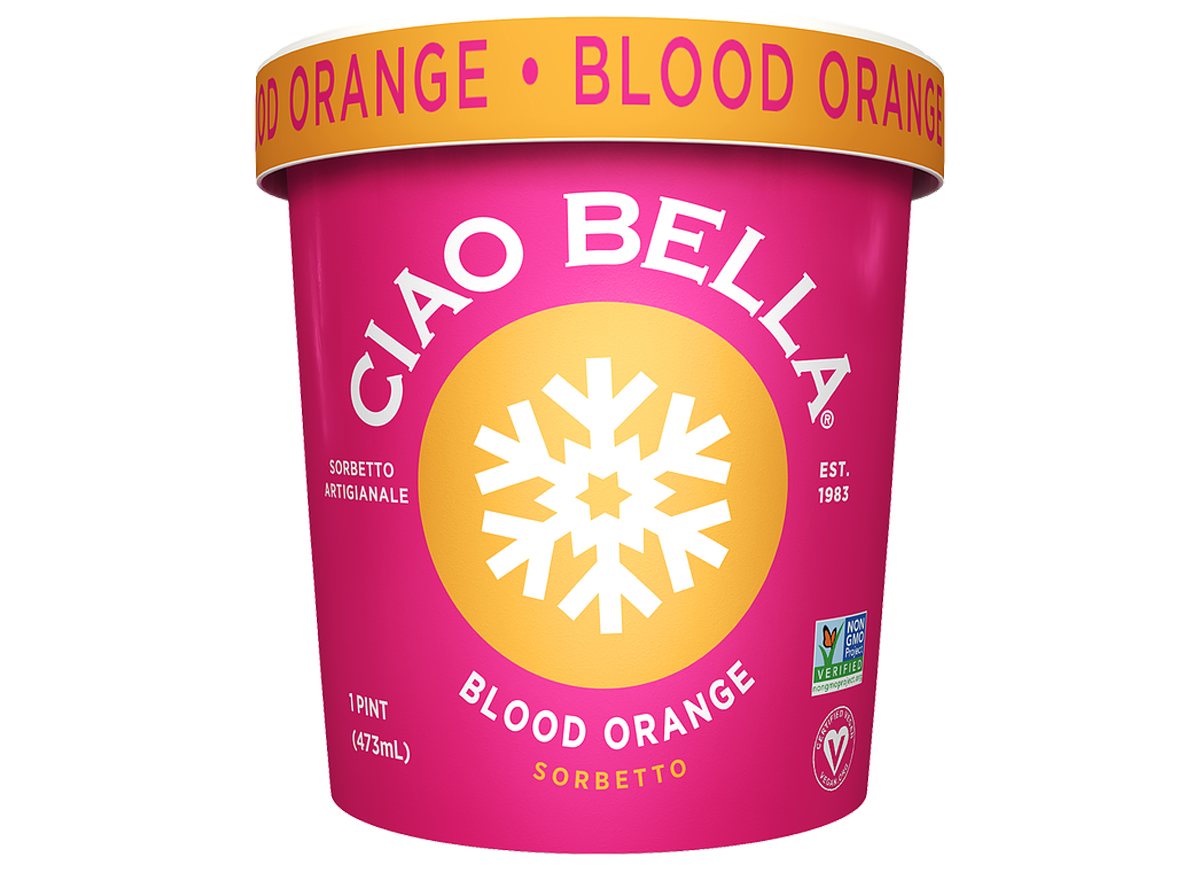 While there are many creamy vegan ice creams out there, Ziata said sorbets offer another option for a vegan frozen treat. She likes Ciao Bella's sorbettos, which come in a variety of fruity flavors and dark cocoa.

We know what you're thinking: 33 grams of sugar?! But before you get a panic attack, you can rest easy knowing that the mango is the first ingredient in this refreshing sorbetto, so a majority of its sugar is from the fruit and not from the white stuff. True to Talenti fashion, this sorbetto, like all of their ice cream, has high-quality ingredients sourced from the best places in the world. For example, the mangoes in this frozen treat are from Maharashtra, India, one of the largest producers of Alphonso mangoes. Alphonso mangoes are considered to be one of the best mangoes in the world because of their sweetness, juiciness, and color.

Another of Ziata's favorite coconut milk ice creams is from So Delicious, and she prefers traditional flavors like chocolate. The brand has all kinds of vegan ice cream offerings, from traditional pints to ice cream sandwiches to fudge bars.

Now that you know how many vegan ice cream options there are out there, you might want to try them even if you don't follow a dairy-free diet. These frozen desserts are just as good as the ice cream you're used to—you won't even miss the dairy component.