These supposedly animal-free foods will make you gag, regardless of your dietary lifestyle.

Nothing written in fine print is ever good news. That's true if you're a credit card holder wary of hidden fees, a Facebook user navigating a maze of privacy settings, or a vegetarian looking for a bagel that's not made with duck feathers.

Many people who choose to eat vegan or vegetarian are doing so for health or personal ethical issues. So it's shocking that food manufacturers often sneak animal parts into foods that the average herbivore thinks will fit in with his or her vegetarian lifestyle. From OJ to bananas, even the most seemingly safe and uncomplicated of foods can hide bizarre animal products capable of making a carnivore cringe. Ladies and gentlemen: these are the foods that make the vegetarian black-list—because they aren't actually vegetarian. But don't worry; there are still plenty of other good options out there, like these 26 Best Vegetarian Sources of Protein!

If you're eating … White Sugar
You're also consuming … Animal Bones

Refined white sugar is bleached in a process that entails running the sugar through "bone char" or "natural carbon"—both fancy terms for charred cattle bones. Confectioner's and brown sugar can also be culprits, as they are variations of white sugar. Stick to organic cane or turbinado sugar; or consult this list of char-free sugars.

The "natural flavor" you see listed on your favorite vanilla ice cream may actually come from a beaver's rear end. Castoreum is the technical term for the all-natural ingredient—a fragrant, brown slime that beavers use to mark their territory, and food scientists use to give products a musky, vanilla scent. The FDA has ruled that because there's no harm in eating castoreum, food manufacturers are not required to list it in the ingredients. Your best bet is to stick to vegan-approved ice creams like Soy Delicious or to look for real flavors and avoid the generic "natural flavoring." And if you're pregnant, be sure to avoid these 7 Worst Ice Creams When You're Pregnant! 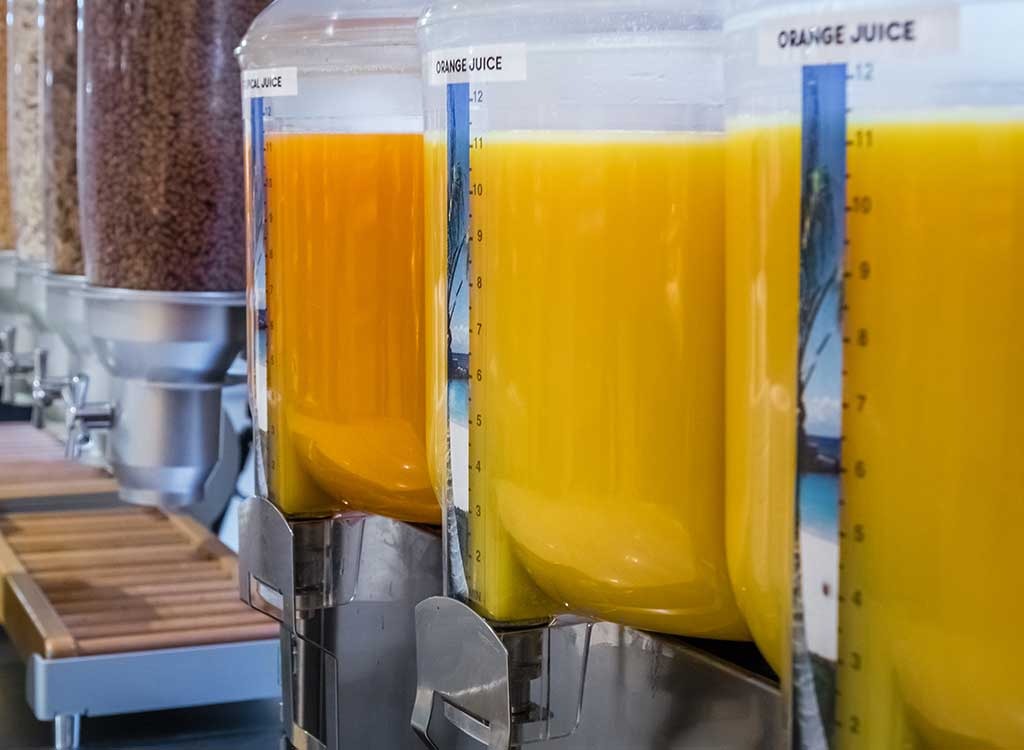 Oranges, however nutritious, aren't naturally "heart-healthy." In order to market a juice as such, manufacturers add omega-3s, which are sourced from anchovies, tilapia, and sardines. (The exception to this is if the omegas are synthetic.) Also, the vitamin D in some fortified juices comes from lanolin, a waxy substance from sheep's wool. Tropicana and PepsiCo escape the blacklist, but steer clear of Coca-Cola juices, which contain lanolin-derived vitamin D. Better yet, juice your own!

If you're eating … Refried Beans
You're also consuming … Pork Fat

Beans can be a great source of protein for our veggie-focused friends, especially when coupled with whole grains. (Hello, complete protein!) However, many traditional Mexican restaurants have a secret: Their refried beans are made with lard (pork fat). 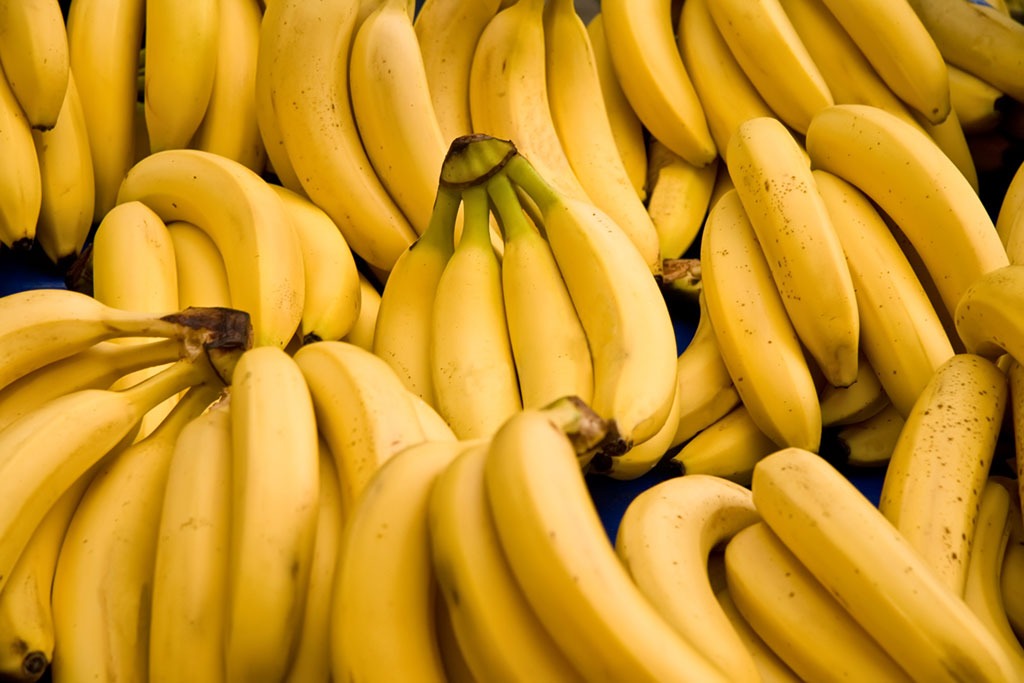 If you're eating … Bananas
You're also consuming … Shellfish

Your banana has crabs. According to Science Daily, Chitosan, a bacteria-fighting compound derived from shrimp and crab shells, has made its way into spray-on preservatives that extend the shelf life of bananas and can infiltrate the fruit. That's bad news for vegetarians, vegans, and anyone with a shellfish allergy. Watch for new warning labels that read: "This product may contain shellfish by-products." Or just buy organic. Speaking of, find out the 17 Organic Foods That Are So Cheap There's No Excuse Not to Get Them!

If you're eating … Bagels
You're also consuming … Bird Feathers

Here's what it takes to make a plain bagel: flour, water, salt, yeast. Unless you're a popular bagel chain. Then you throw in some duck and chicken feathers. Many processed bagels and bread products contain the enzyme L. Cysteine, a "dough conditioner" sourced from duck and chicken feathers. (It can also be made from human hair.) Einstein Bros. and Dunkin Donuts have both confirmed using L. Cysteine in all of their bagels. Poultry feathers also make an appearance in the garlic bread at Pizza Hut and in Mickey D's cinnamon rolls and apple pies.

If you're eating … Red Candies
You're also consuming … Crushed Beetles

Watch out for "Natural Red #4." Not only does it give most red candies their coloring, it refers to carmine, a pigment extracted from the female Dactylopius coccus Costa insect. It's sometimes listed as "cochineal," "carminic acid" or "carmine." Guys, it's crushed-up beetles, and it's more pervasive than you might think; wine, vinegar, and colored pasta also boast the beetle juice. 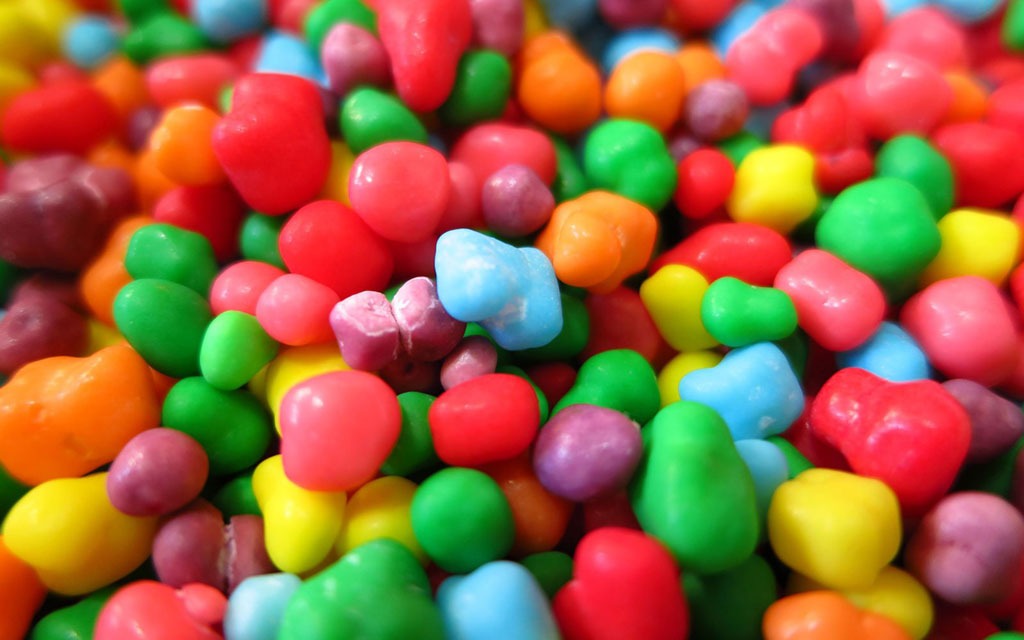 If you're eating … Hard-Coated Candies
You're also consuming … Bug Juice

Most candy coatings are made from shellac, a resin secreted from the rear end of the female lac bug. It's usually listed as "confectioner's glaze" in the ingredients. You may have heard of shellac before, like when you get a manicure that lasts several weeks. Yeah, it's the same stuff. Shellac is also found in furniture polish, hairspray, and agricultural fertilizer. Yummy. Do your research before indulging, as not all hard-shell candies are culprits (M&Ms are safe!). Here's a list of confections to pass up. 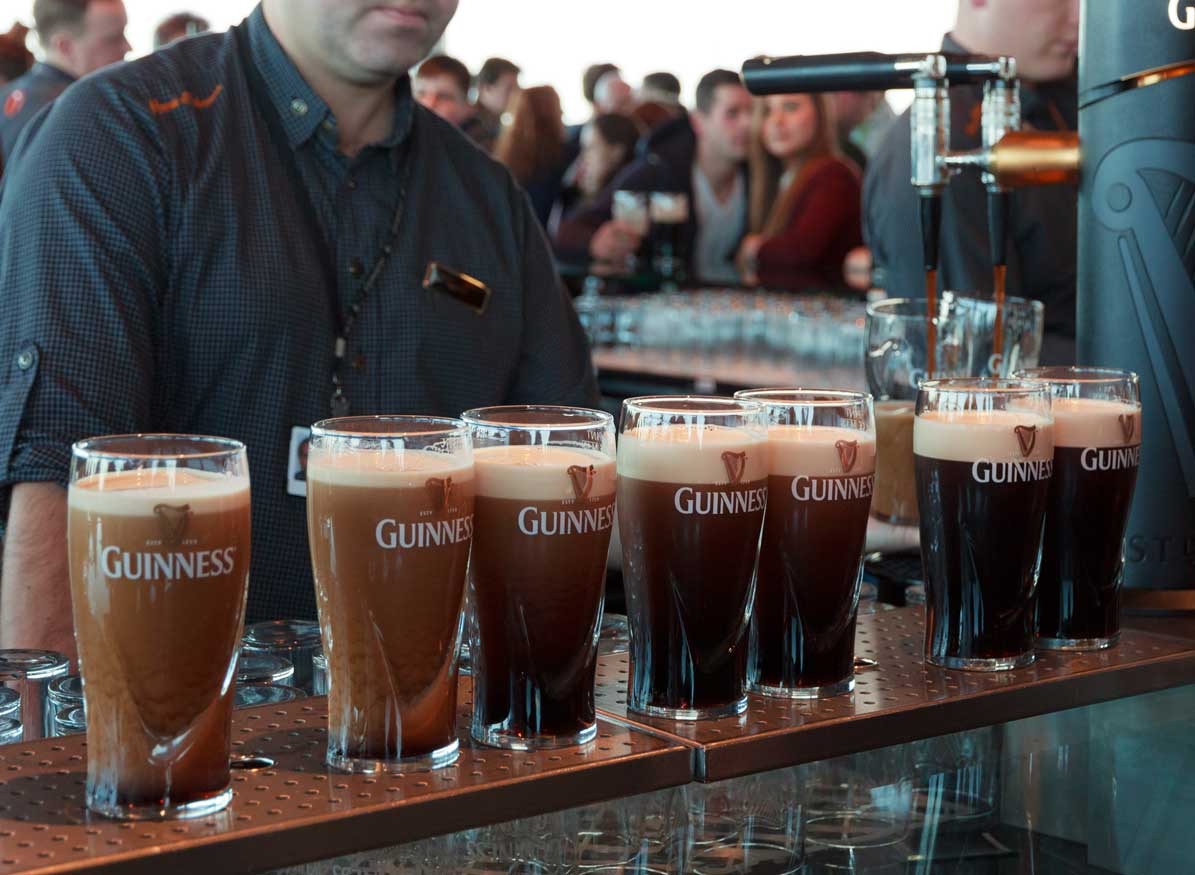 Mmm, this cab has notes of currants, vanilla, and…sturgeon? Some brands of beer and wine, particularly those made in Britain, are clarified using isinglass, a gelatin from the air bladder of certain freshwater fish. (Guinness is a specific example that uses isinglass.) Vegetarian clarifiers can be made from clay or algae. 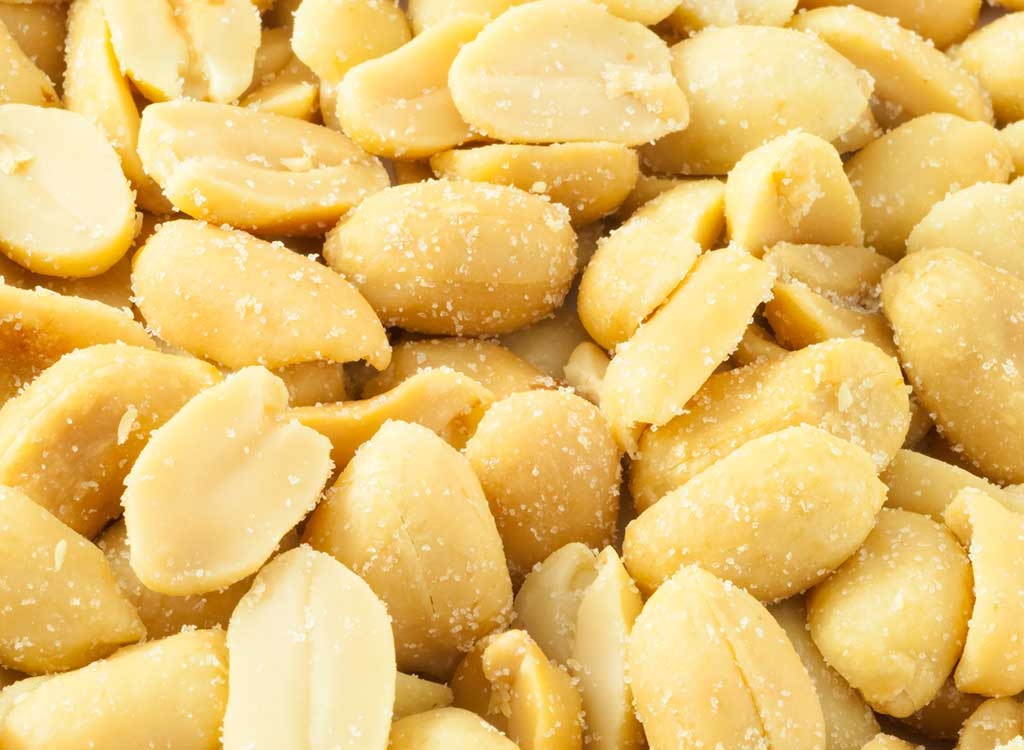 If you're eating … Salted Peanuts
You're also consuming … Pig Hooves

Some brands use gelatin as an additive to help salt and other spices adhere to the peanuts. Gelatin is derived from the collagen in cow or pig bones, hooves, and connective tissues. (Think: bone broth) Always buy plain peanuts in the shell. Plus, a study published in the journal Appetite found that eating shelled nuts can save you up to 22 percent or your calories!

Many chips, especially barbecue flavor, contain chicken fat (or schmaltz). Always read the food labels carefully. For example, while Lay's "Country Flavor" BarBQ chips are vegetarian-safe, Lay's KC Masterpiece Barbecue chips and BBQ Baked Lay's are not. We did some legwork for you BBQ lovers and found that Fritos and Boulder BBQ varieties are also vegan-OK. In fact, we dug up the 11 Best Brand Name Chips for Weight Loss, too. 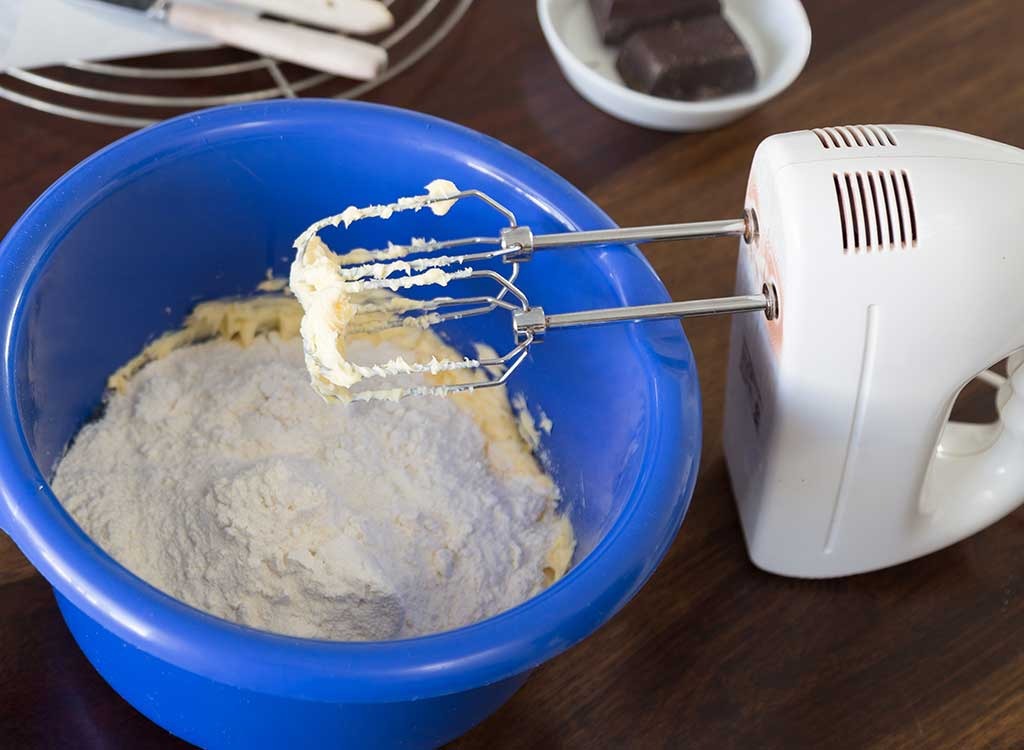 If you're eating … Cake Mix
You're also consuming … Pork Fat

Believe it or not, it's common for pork fat (lard, as mentioned earlier) to find its way into the dry ingredients of boxed cake mixes. Simply check the label for "lard"!

If you're eating … Some Cheese
You're also consuming … Calf Stomachs

It ain't easy being cheesy if you're a strict vegetarian. Many cheeses are made with rennet, an enzyme derived from calf stomachs. Traditional Parmesan, for example, always has rennet. Most British cheeses do, too. (U.S. cheesemakers often use cheaper alternatives.) To complicate things, brands aren't obligated to state whether or not they use the enzyme. Alternatives include cheeses made from a liquid vegetable rennet and soy and rice alternatives. Also, look for kosher cheeses—orthodox Jews do not eat milk and meat together, so you're guaranteed to get a calf-free slice. 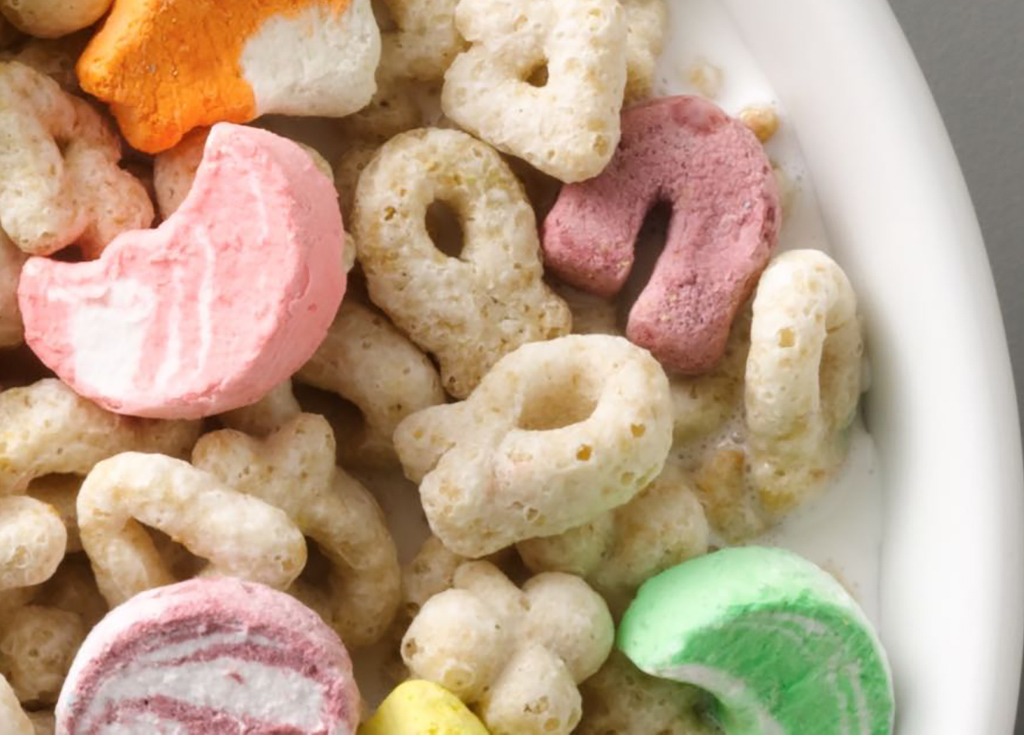 If you're eating … Lucky Charms
You're also consuming … Animal Bones

Those marshmallow moons, clovers and horseshoes are made with gelatin, derived from animal collagen (aka cartilage, skin, tendons, bones). True veg-heads—and those who keep kosher, and cannot mix milk and meat—have known this for years, staring regretfully at the taunting leprechaun. Also containing gelatin: Smorz, Fruity Marshmallow Krispies, and Rich Krispies Treats Squares.

If you're eating … Twinkies
You're also consuming … Beef Fat

These undying, suspiciously shelf-stable things are made with beef fat. But vegetarian or not, you don't eat these anyway, right?

If you're eating … Jell-O
You're also consuming … Animal Bones

Now that you know what gelatin is, this probably makes sense that Jell-O wouldn't be animal-free. For a pigskin-free version, try Lieber's kosher brand.

If you're eating … Worcestershire Sauce
You're also consuming … Anchovies

Everyone's favorite unpronounceable condiment isn't a favorite of vegetarians: Many varieties are made with anchovies, along with malt vinegar, molasses, sugar, and spices. Certain brands even list the fish on their labels, although they may contain less than 1/60th of the little guys. Speaking of condiments, don't miss our exclusive 25 Best and Worst Condiments! 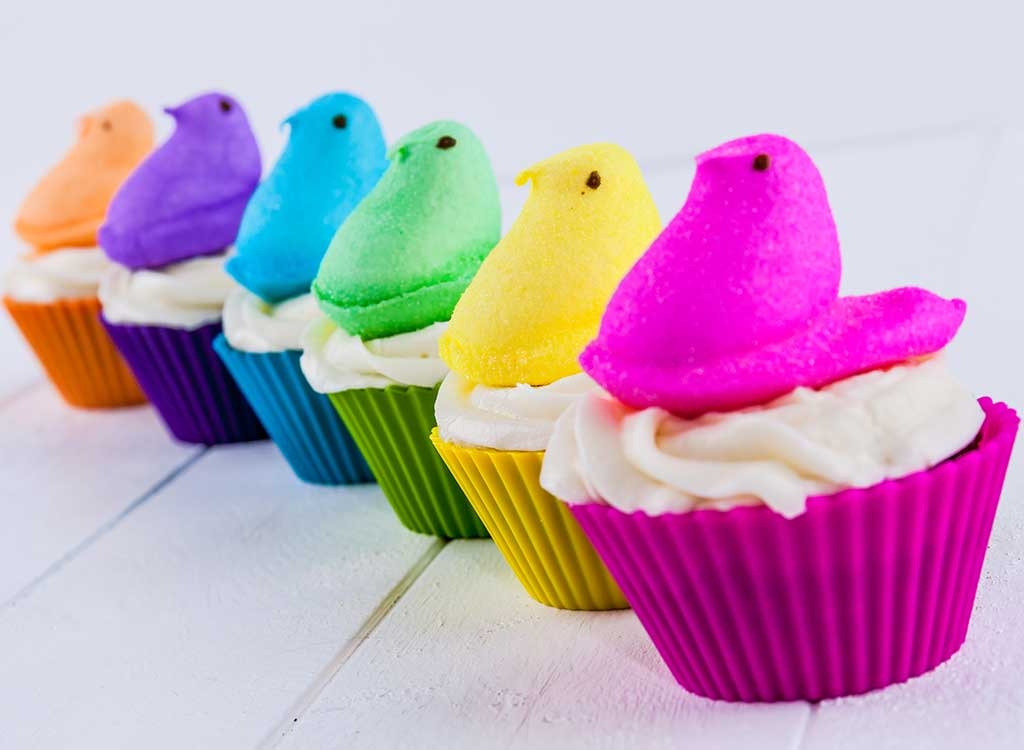 If you're eating … Peeps
You're also consuming … Animal Bones

The fluffy Easter favorite only looks harmless to vegetarians. He's actually made with—yep—gelatin. Keep this in mind this Halloween season, when the orange Peeps return to trick cautious customers and treat everyone else.

If you're eating … Pesto
You're also consuming … Calf Stomachs

Wait! Pesto is just pine nuts, basil, and olive oil, right? It's an easy mistake to make and quite common, but people frequently forget about that last traditional ingredient—parmesan cheese. Remember what we discussed above? Parm is made with rennet and, therefore, not a calf-free food. There are plenty of recipes out there for vegetarian and vegan versions, so just whip up a batch at home to be safe. 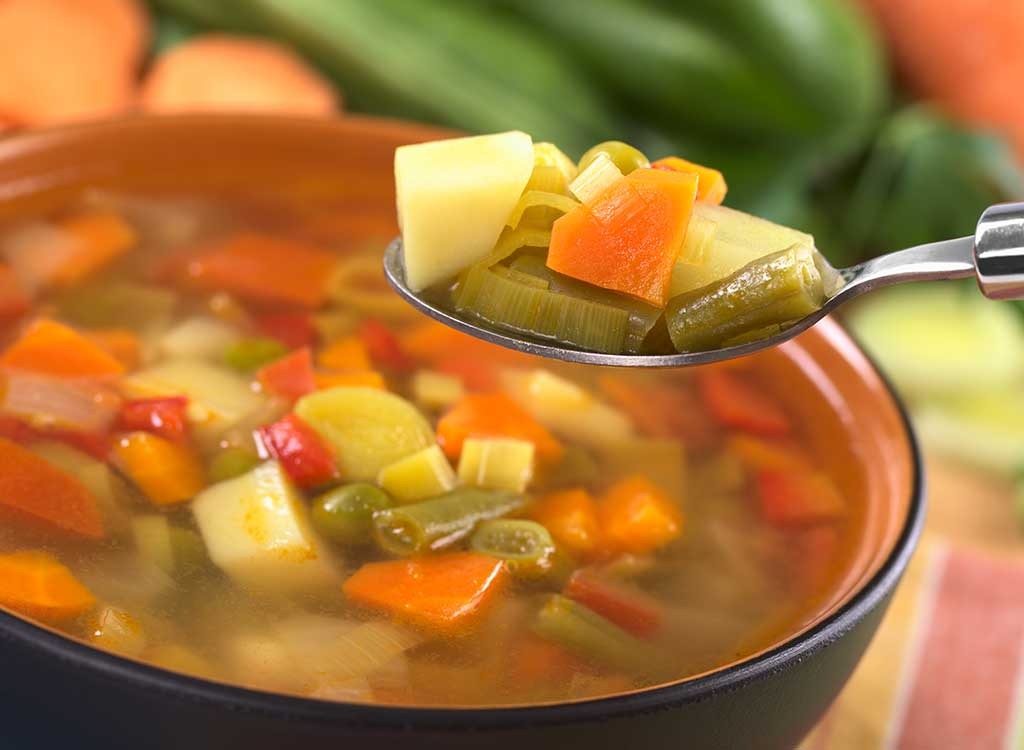 Always, always, always read the label. Store-bought soups frequently use chicken or beef stock as a base, even if they're called simply "vegetable soup." Watch out for split pea soups as well, which frequently use ham in the cooking process, even if there aren't pieces in the finished product. And don't miss our 36 Best and Worst Canned Soups & Soup Products so you know you're picking up the best soup possible!