10 Weight Loss Tips from Around the World

What works overseas for other people's waistlines is well worth a try on U.S.A. soil, too.

Sometimes, what infuriates most about traveling abroad is not so much the difficulties in communication, what side of the road to drive on, or the funny-shaped power outlets. It's that everyone eats like crazy and somehow remains annoyingly thin.

Is it just better body chemistry? The sparkling water? The tiny cars? Actually, the key may be the strategies and techniques to both shed weight and keep it off. The jury is out on the exact science—but there is enough truth and tradition in these 10 weight loss tips from around the world to give them a try. Incorporate more international ideas into your day-to-day and then scope out even more ideas with these 30 Easy Eating Habits for a Flatter Tummy!

Chinese Pop Singer Faye Wong can make her fans weep with her voice, but it's her Witch Soup (also called seven thin soup) that's all the rage in the region—especially after she remained so thin after having two children. Basically, just toss tomato, cabbage, green pepper, small onions, and celery into a big pot filled with water and simmer for three hours; add salt, pepper, and parsley to taste. Then eat for seven days. Because, yep, souping is the new juicing. (Avoid these 20 Worst Ingredients to Put Into Your Soup if you're thinking of making your own witchy-like soup.)

The controversial French diet method called "Le Forking" remains a popular diet fad, and Americans will probably never tire of hearing about how the French remain famously thin. The basic rule is that you eat whatever you want, as long as you can do it with a fork only (and no fingers). If it sounds crazy, consider that it eliminates spreads, nuts, soups, sandwiches, pizza, and steaks. Hardcore devotees also cut out knives or other utensils when they're even cooking, too. And yes, using a spork is probably le cheating.

Explorers to the southern tip of Africa were delighted to discover bushes of Aspalathus linearis growing throughout the countryside. Once harvested, chopped, and fermented, the plant's needles, stems, and flowers become even richer in boiled water—turning a deep red color in the process. Yes, this is the same drink food journalist Kelly Choi swears by in her book The 7-Day Flat-Belly Tea Cleanse, but it's also a favorite health drink in South Africa for its high antioxidants and mineral content. Dieters often turn to it because it's naturally sweet tasting and the catechins have been linked to a fat burning processes.

If you've ever wondered how many ways there are to prepare buckwheat, the all-Buckwheat diet should give you the answer. Already prized in Russia for its ability to lower high blood pressure—thanks to the rich supply of flavonoids—buckwheat helps with weight loss, too. Employing a mono diet of it— that's breakfast, lunch, and dinner—reportedly accounts for up to 12 pounds a week. The high amount of fiber also keeps you from fitting anything else in the stomach; and you'll be very, very regular. 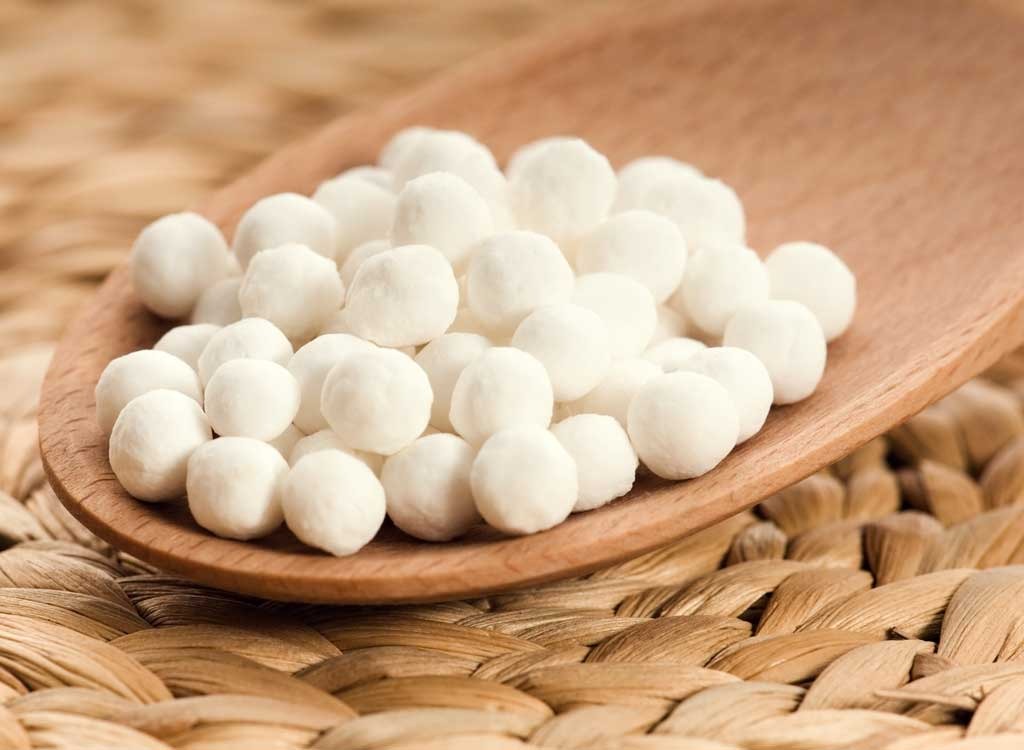 The secret to Brazilian beauty may not only be in the warm sun, bronzed skin, and fun-loving attitudes. Many look to tapioca flour (made from the cassava root) as a key to keeping the weight off. It's low in sodium, gluten-free, and takes longer to digest, keeping your belly full for longer. Pancakes made of the flour is one popular way to eat it, with healthy fillings like light cheese, egg, chicken breast, peanut butter, fruit, and honey. Just be sure to avoid these 25 Foods That Make You Hungrier.

In Ayurvedic philosophy, water and earth (Kapha) are the heaviest elements; so, you want to avoid foods that are high in both. This means swearing off hard cheeses, puddings, nuts, cold beverages, avocado, coconut, and olives; and embracing fire, air, and space ingredients like astringent and mildly sweet fruit (apples, cherries, figs), bitter and pungent vegetables (artichokes, beets, and broccoli), light grains (amaranth, barley, buckwheat), and legumes (lentils, beans). Hey, we're not saying you shouldn't eat things like avocado; we're just saying what some people in India swear by.

In Mexico, they take two steaming cups of honey and cinnamon—one a half hour before breakfast and one a half hour before bed—to watch the weight fall off. To do this in your own home, just drop half a teaspoon of cinnamon into a cup of boiled water, let it cool, and then add one teaspoon of raw honey. Regular intake supposedly prevents fat from accumulating in the body. Mexican cinnamon works best. For other ideas of what to do in the p.m., check out these 30 Things to Do 30 Minutes Before Bed to Lose Weight. 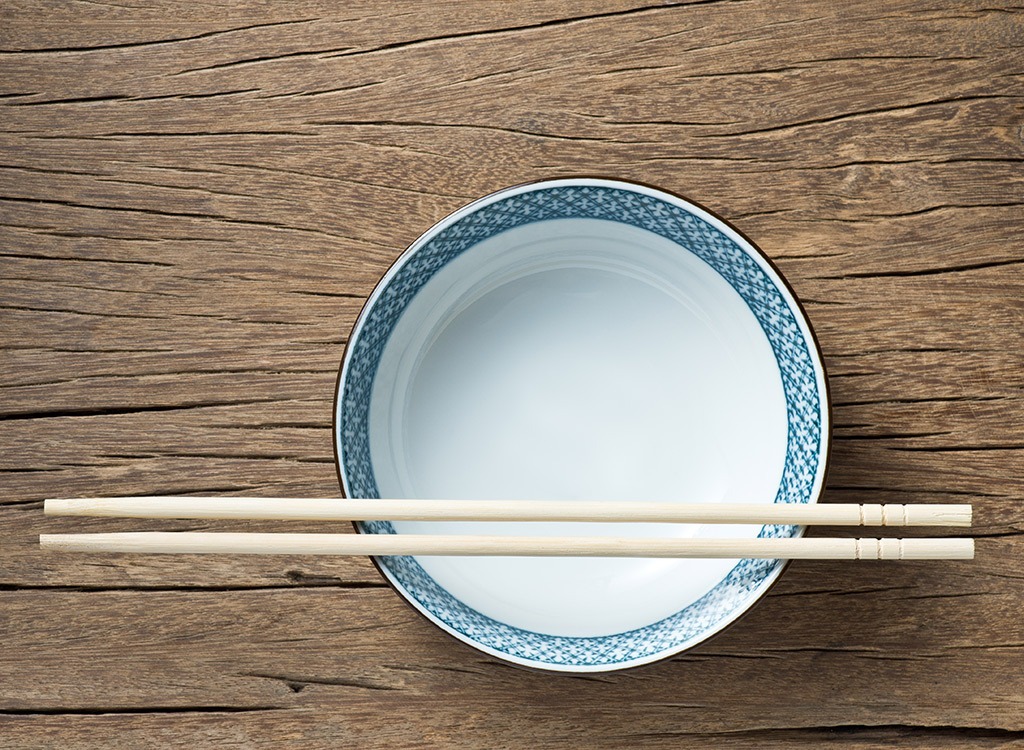 There's Confucian philosophy behind weight control in Japan, particularly in Okinawa, called Hara Hachi Bu, which instructs only eating to 80 percent fullness at any given meal—thereby consuming fewer calories. How do you know you've reached the optimal level, especially when the brain is 10-20 minutes behind the stomach? Chopsticks are a big help, as they force you to eat more slowly, thereby allowing your brain to catch up. An easier option is to budget more time for your meals so you can physically just eat slower.

Americans may think parsley as merely a green garnish and just for show. But it makes for an effective weight loss idea in Turkey. Simply chop and drop (about a quarter cup per mug) into boiling water, let steep for about 5-10 minutes, strain, and drink. Not only do you get a good dose of vitamins A, K, and calcium, parsley is a diuretic that helps excrete excess water and fluid in the body, reducing bloating and reportedly balancing the hormones that contribute to weight gain. 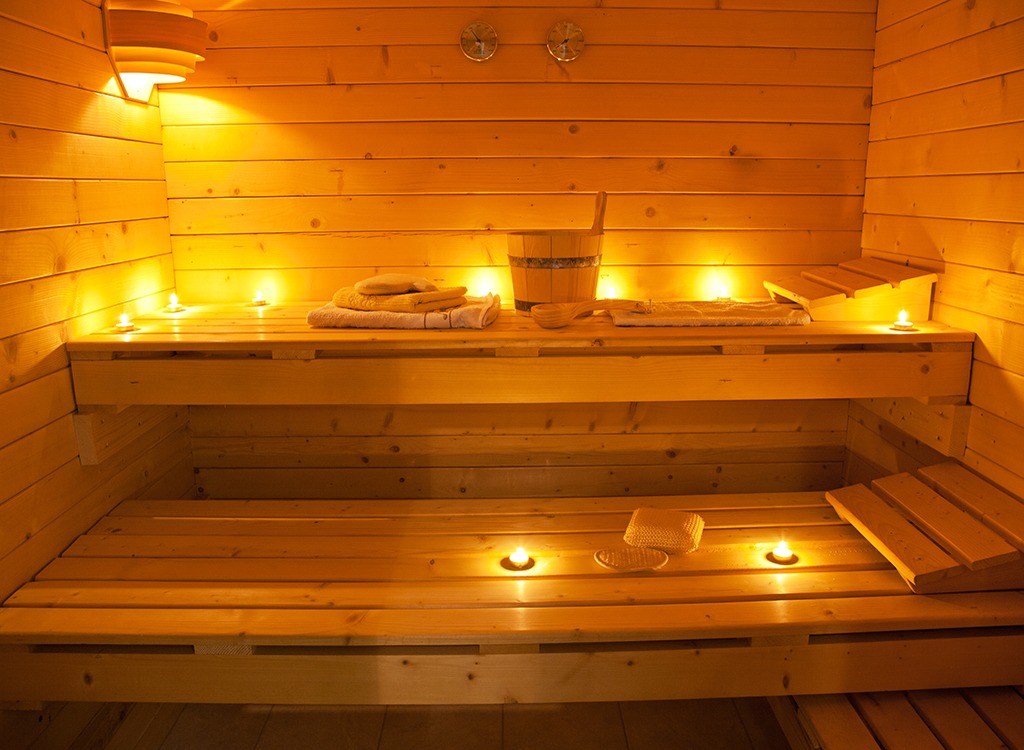 Nope, they're not eating honey and salt to lose weight in Estonia. Instead, locals massage a 50-50 mix of the two into their skin (especially trouble zones) and then head to the sauna. The combo increases the cleansing and sweating, which drops extra water weight, and honey's skin-improving effects are soaked up by the open pores. The salt also helps remove dead skin cells—which, in the millions, can add up to several pounds. Taking an epsom salt bath is actually one of our recommendations for 24 Ways to Shrink Your Belly in 24 Hours.