Weird Things That Happen to Your Body After 40, Says Science

From a more droopy nose to slightly duller reasoning skills, here's how your body changes in middle age.

A recent poll found that the average American considers 36 years-old to be the "perfect" age. Among the respondents, four in 10 even said they'd prefer to "freeze the clock" and stay in their late-thirties indefinitely. It all begs the question: Is turning the big four-oh really all that bad?

Well, of course not. In fact, there's plenty of science to suggest that turning 40 may be one of the best things that will ever happen to you. According to one report published by the The Economist, for instance, tons of Americans see their overall happiness and life satisfaction sharply increase after turning 40.

This all makes perfect sense, of course. By the time many people turn 40, they've established themselves career-wise, perhaps settled down with a significant other, and they may be enjoying the family life. (Or, if they don't want those things, that's cool, too. Part of getting older is knowing what you want.)

But setting aside things like happiness and life satisfaction, it doesn't change the fact that your body begins a significant physical shift when you turn 40, and some of the things that naturally happen are far weirder than just "a slower metabolism." To learn just a few of the things that happen to your body and physique when you hit middle age, read on. And for some great ways to fight back against the inevitable decline, don't miss The Secret Exercise Tricks for a Leaner, Fitter Body After 40.

The Pitch of Your Voice Changes

As we age, our vocal chords undergo changes. UT Southwestern Medical Center states the muscles and tissues in the voicebox (larynx) and vocal folds (cords) shrink, thin, and stiffen as years pass by. Losing all of that elasticity can result in a higher pitched voice among men, and a lower pitch for women. Both genders may notice their voice losing volume and projection, as well. Individuals who use their voices a lot, such as singers or coaches who enjoy screaming from the sidelines, are usually more likely to develop such age-related vocal changes. And for some great ways to exercise after 40, don't miss The 5-Minute Exercises That Will Make You Sleep Like a Teenager. 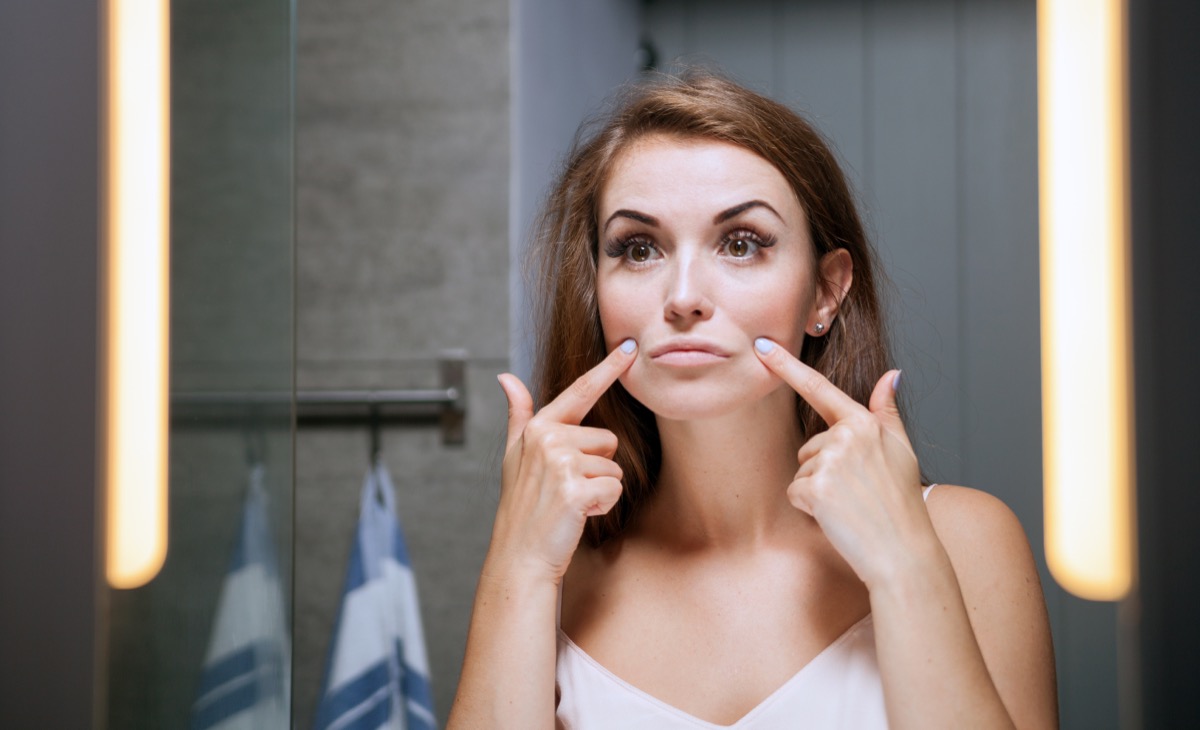 As you age, says Harvard Medical School, you lose fat volume around your face, and what once appeared smooth and taut and round will begin elongate and sag. Yes, there are inevitable wrinkles, but, believe it or not, you'll also notice the sagging on your ears, your jawline, your nose, and underneath your eyes.

Your Muscle Mass Begin to Wither

Sarcopenia, or age-related muscle loss and weakness, is a fact of life. Harvard research tells us that men generally tend to lose 3-5% of their muscle mass each decade starting at the age of 30. "This condition actually starts when you are 30, but due to the slow moving nature of sarcopenia you will usually not start to see the effects until you are about 40," comments Chris Riley, CEO of USA Rx.

Determined to stay buff well into your golden years? Science suggests the best approach is progressive resistance training (PRT), which means gradually increasing your workout volume and intensity as you grow stronger little by little. And for more on training right as you age, don't miss The Secret Exercise Trick for a Flatter Stomach After 40.

Your Hormones Begin to Change

One of the most common complaints about getting older is loss of libido, which can be traced to hormonal changes that start around the age of 40 in both men (drop in testosterone) and women (decrease in both estogren and testosterone).

However, hormonal changes in middle age can impact much more than what happens between the sheets. "When you hit 40, your hormones start a 10-15 year decline. These declining hormones make it hard to sleep, hard to lose weight, give you brain fog, make you irritable, anxious, low libido, lack of motivation to workout and can make you feel like you are living in someone else's body and mind," explains Mindy Pelz, MD.

According to Dr. Mindy, a key aspect of aging robustly is to make the appropriate changes to your daily diet and routine. What worked for you at 20 probably won't at 40. "This is why I strongly recommend making 5 key lifestyle changes: Change when you eat, what you eat, focus on your microbiome, learn to detox, and have tools to handle stress," she concludes.

Your Hair Starts to Thin Out

You'd be hard pressed to find anyone who won't experience at least some hair loss as they cross the boundary from young adulthood to middle age. This study published in the Journal of the American Academy of Dermatology in 2015 even found 40% of women will notice at least some visible hair loss by the time they turn 50.

Even if you're only losing the norm of about 50-100 strands per day, by the time you reach 40 it will start taking longer and longer to grow new hair.

Your Ability to Reason Drops

According a study published in the British Medical Journal, your cognitive reasoning skills begin to decline by 3.6 percent starting in your 40s and then well into your 50s. To ensure that you're properly nourishing your brain, don't miss The One Exercise That's Best for Beating Back Alzheimer's and Memory Loss!6254a4d1642c605c54bf1cab17d50f1e

"As the aging process starts in our cells, known as Age Associated Cellular Decline, which typically begins in our 40s and accelerates as we enter our 60s. Research has found that mitochondrial decline—the energy producers of our cells—can directly impact our cells' ability to perform at optimal levels, and thus impair the function of our tissues and organs," says Noelle Reid, MD.

According to Dr. Reid, these changes can manifest in a number of different ways, from constant fatigue to a weakened immune system. On the bright side, research suggests regular exercise can slow the loss of mitochondria. For more on that, check out The One Major Side Effect of Going on a 1-Hour Walk, Says New Study.