This Is Why Chick-fil-A's Chicken Tastes So Good

It's not all in your head—the secrets behind the chicken joint's popular 'wich boils down to a science.

In 1964, perfectly-seasoned poultry was nestled between two pillowy, buttered buns to create one of Chick-fil-A's best-selling menu items, the original Chicken Sandwich. While some folks may attribute its tantalizing taste to certain ingredients, such as MSG, used in the coating blend, the chain swears that Chick-fil-A's chicken tastes so good simply due to some smart sourcing techniques—and a labor of love.

What Makes the Original Chick-Fil-A Chicken Sandwich So Good

The company starts off by picking small birds that yield more juicy meat. "The industry has gone to a larger bird because if you're a chicken producer it's more efficient to grow a bigger bird," David Farmer, the company's vice president of menu strategy and development, said. "But we don't like bigger birds. We like the texture that comes from the smaller bird. We want the tenderness of that meat."6254a4d1642c605c54bf1cab17d50f1e

After cherry-plucking the right chicken, achieving the coveted crispiness all boils down to the breading technique. "To properly bread the chicken breast, one must tilt the whole body forward over the flour bin, lifting the heels and pushing down on the breast with an athlete's might to ensure the most dense and consistent application of the flour," Alexa Griffith, a culinary arts graduate working at one of the highest levels of corporate cuisine, told Atlantic57. After the breast is fried to perfection, it's stacking time! Griffith avoids  overlapping two pickles in the sandwich, humorously clarifying that "they date, they don't mate."

According to Arlin Wasserman, founder and partner at the food industry consultancy Changing Tastes, pre-buttering the buns lends the bread an appealing umami flavor while placing the pickles on the bottom "means you taste it just before the chicken, making the tangy-to-buttery contrast even more stimulating."

How Does Chick-fil-A Make Its Grilled Chicken Sandwich? 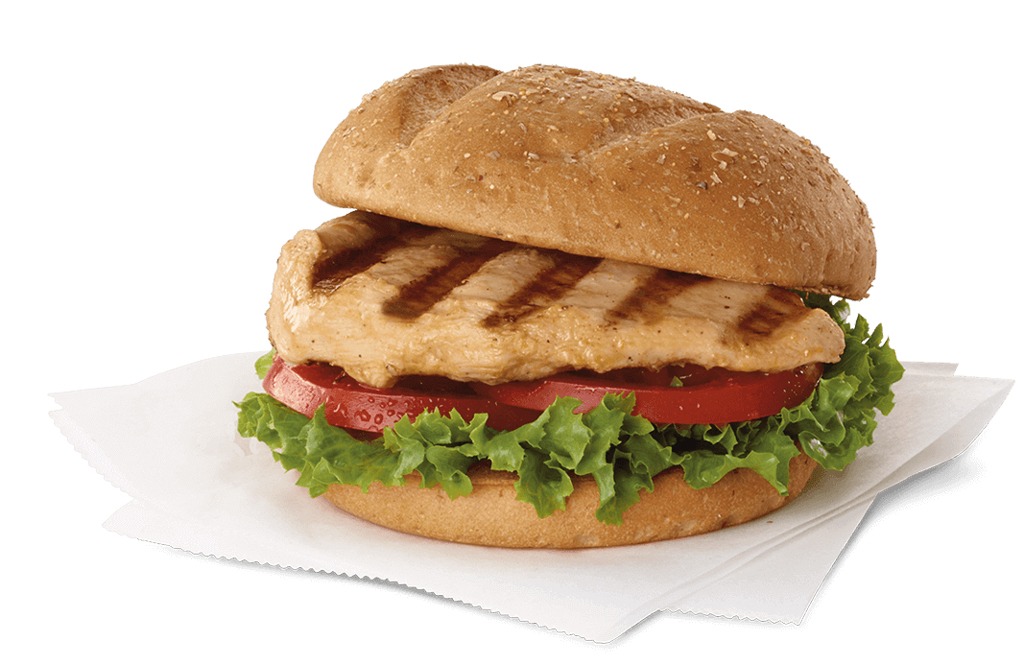 Now that we know how the hand-breaded chicken 'wich won the hearts of millions of Americans, we know you're wondering about the grilled menu options. In 2014, Chick-fil-A relaunched its Grilled Chicken Sandwich, which offered a healthier and less caloric alternative to its fried predecessor. However, back then, the tech to make the chicken taste straight off the barbie (as Chick-fil-A intended it to) just didn't exist. Long story short, Chick-fil-A's team invented it. Using a patented hydraulic system that exerts the perfect amount of pressure on the chicken, the fast food joint was able to achieve a juicy and tender piece of meat that cooks quickly and produces—arguably the most emblematic indicator of freshly-cooked meat—real grill marks.

"Having the new grill in the restaurant gave us the ability to offer something different and healthier, and we're really excited about it," Farmer said in a press release. Now that you know why you keep hitting up the chicken joint for its popular sandwiches, brush up on more fast food trivia in 15 Things You Don't Know About Chick-fil-A.

April Benshosan
April is a born-and-raised Brooklynite who has a passion for all things health, wellness, and tastebud-related. Read more about April
Filed Under
Chick-Fil-A // Chicken // Restaurant Chains