15 Secrets About Chick-fil-A Every Fan Needs to Know

For seven years, Chick-fil-A has been the country's highest-ranked fast food restaurant. What makes it so special?

For seven years running, Chick-fil-A has been the country's highest-ranked fast-food restaurant, according to the American Customer Satisfaction Index Restaurant Report—beating Domino's, KFC, and Starbucks. Despite slipping a point and enduring some negative press, the chain continues to expand and has a following that's only growing.

Aside from selling delicious, top-secret-recipe chicken (more than 3 billion sandwiches since opening), the chain is celebrated for its crispy waffle fries, insane lemonade, and was the winner of our favorite fast-food dessert taste test. By now, you probably know the secret behind their crave-worthy dipping sauce and that all locations are closed on Sundays, but do you know how the chain got its name or how to order from its secret menu? Read on to learn 15 little-known facts about Chick-fil-A that only a superfan would know.

RELATED: The Best and Worst Fast Food Chicken Sandwiches, According to a Dietitian

The chicken is fried in peanut oil 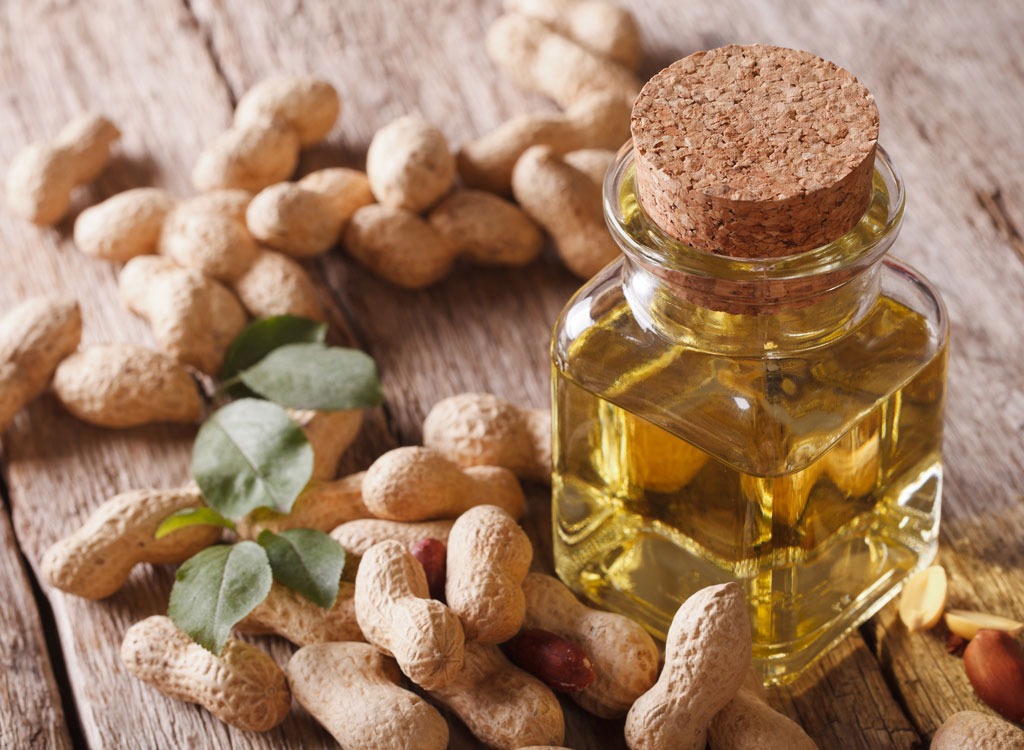 Ever wondered what gives Chick-fil-A chicken its unique flavor? Each location uses only peanut oil for frying, making the company the single largest buyer of peanut oil in the U.S.

Aside from the special flavor, peanut oil is actually a healthier option than other oils because it's naturally free of trans fats and full of heart-healthy monounsaturated fats. That's one reason you can feel good about chowing down on your next chicken sandwich.

RELATED: #1 Healthiest Order at Chick-fil-A, According to a Nutritionist 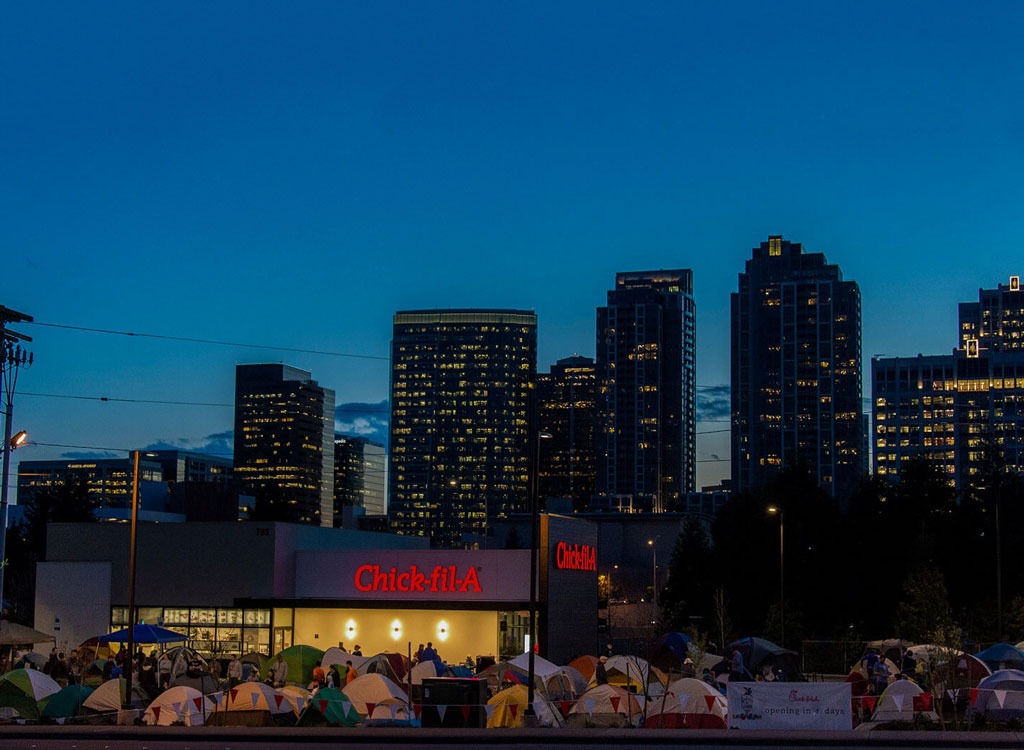 One of Chick-fil-A's most popular stunts was the "First 100" event where fans would camp out at the site of a new location and the first 100 people inside would receive free Chick-fil-A for a year. We can thank the pandemic for the temporary suspension of this time-honored tradition. However, during the program's suspension, Chick-fil-A has been giving away 100 free meals to individuals who positively impact their communities. We hope to see this tradition back next year.

Chick-fil-A buys the most Sunkist lemons

The sauce recipe isn't so mysterious 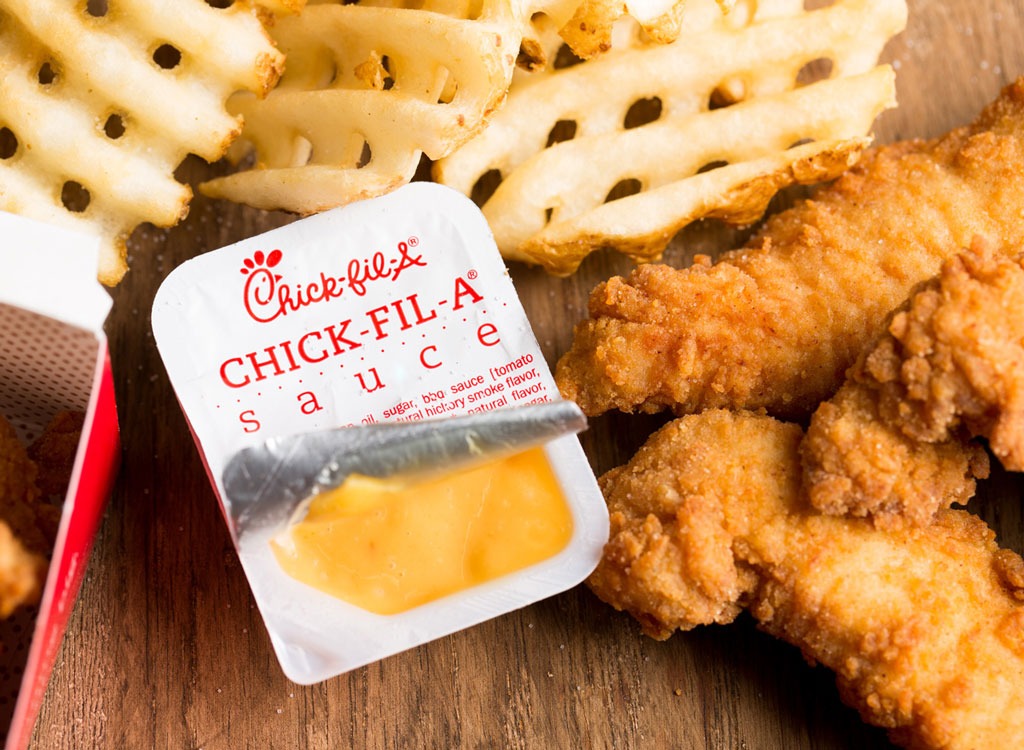 Do you love the Chick-fil-A sauce so much that you take extra to keep at home in the fridge? You're not alone. According to the chain's blog, customers used to take this sauce home secretly in empty beverage cups! You'll be surprised to find out this special sauce is just three sauces combined into one. Next time you're craving it, mix some up using honey mustard, barbecue, and ranch.

Locations are closed every Sunday 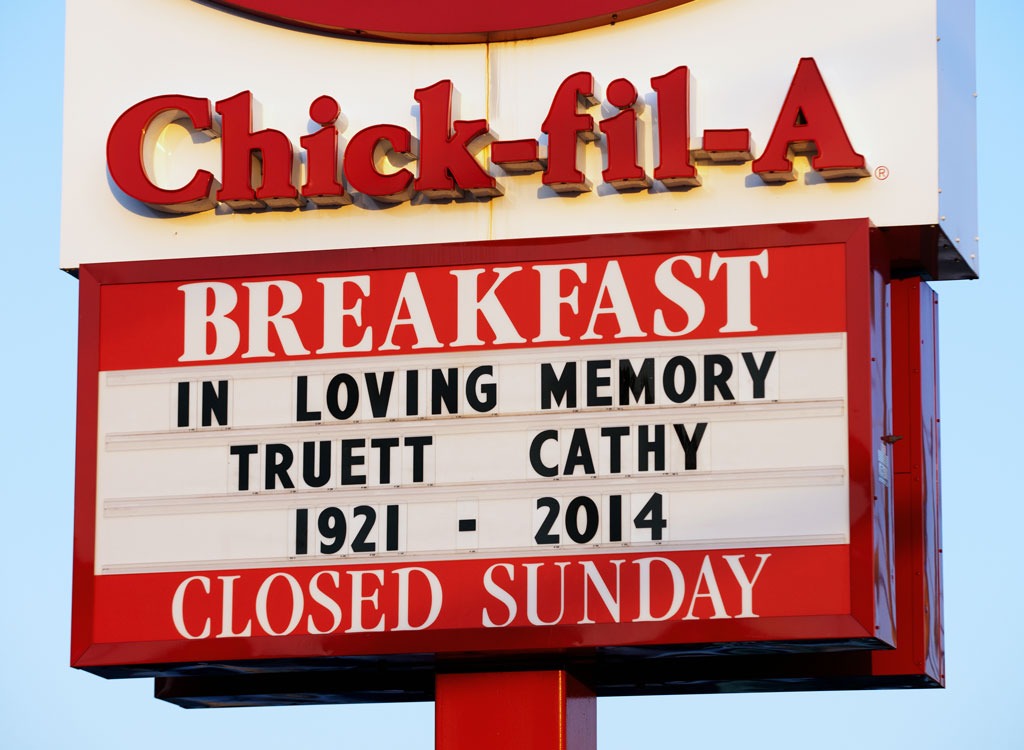 Most people know of Chick-fil-A as being a Christian company, founded by Truett Cathy, who advocated for observing the Sabbath. He required all restaurants to be closed on Sundays, and every location still holds to this edict.

Chick-fil-A has a secret menu 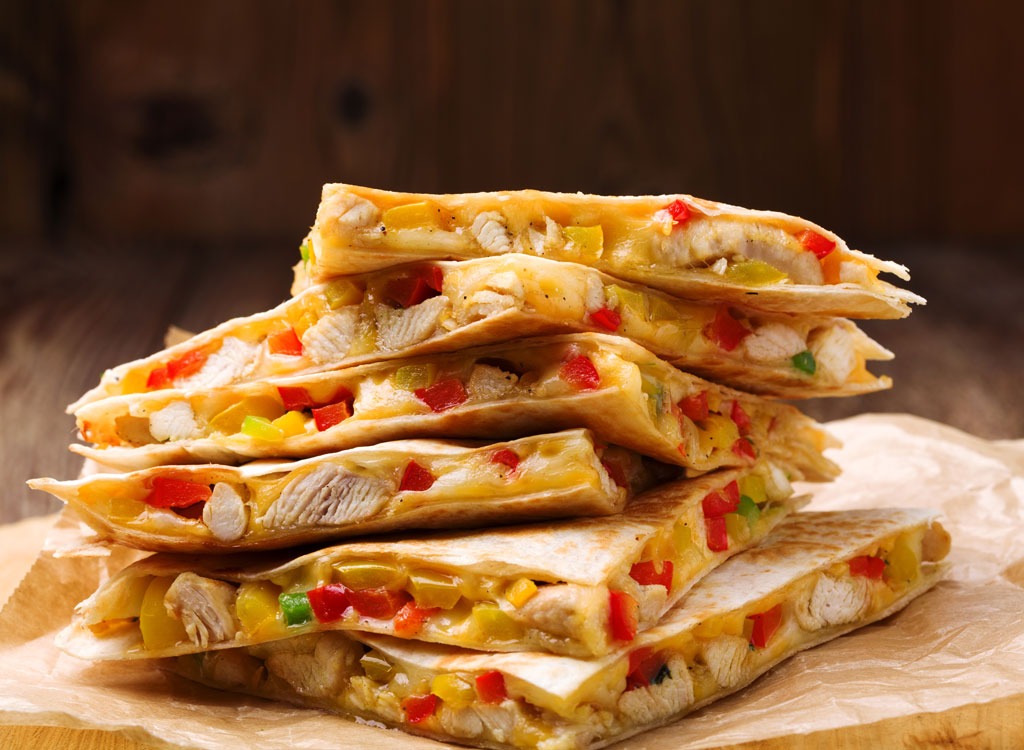 You've probably heard about the infamous Starbucks secret drink menu, but did you know that Chick-fil-A also offers some unknown options?6254a4d1642c605c54bf1cab17d50f1e

While Chick-fil-A disputes the existence of a secret menu, they encourage their customers to order in "creative ways." This includes asking for different milkshake flavors, a Buffalo-style chicken sandwich, or even a chicken quesadilla in some locations! 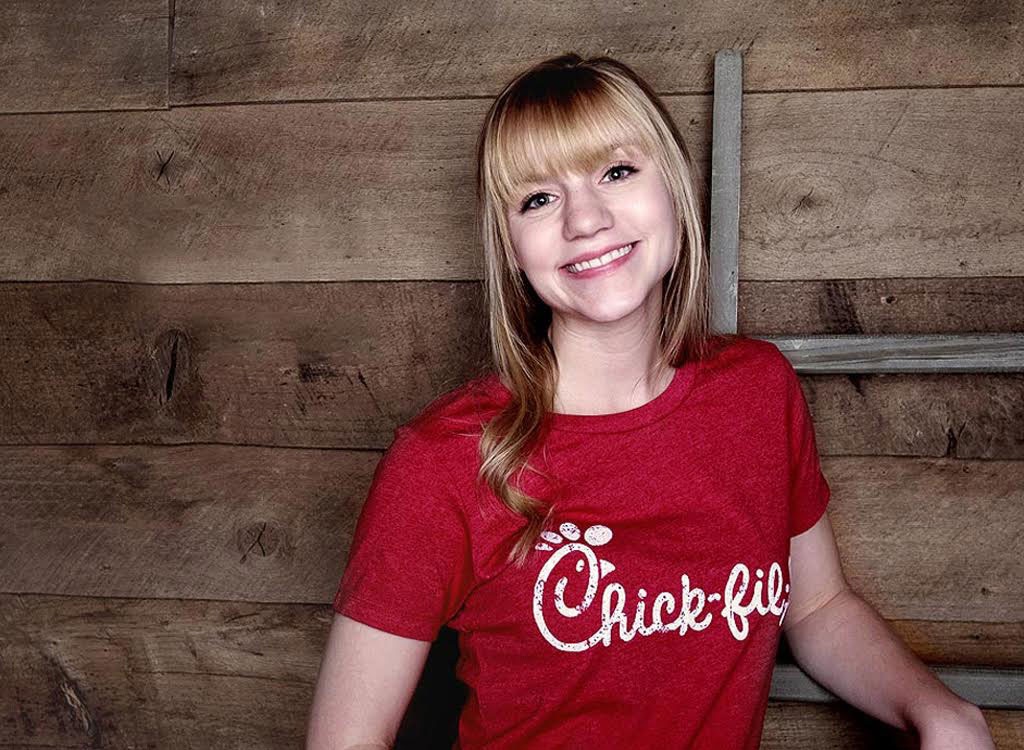 If you're serious about Chick-fil-A, you can dress yourself, your significant other, and your children in the wide selection of clothing sold on the chain's website.

The chain invented the chicken sandwich 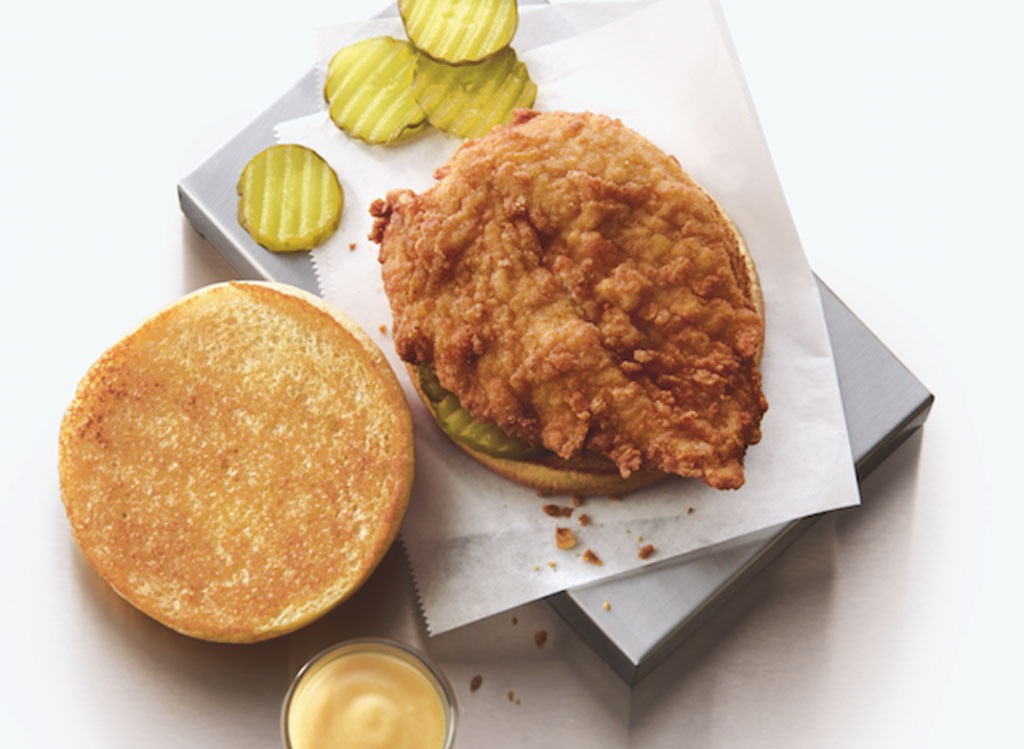 Perhaps this isn't a shocker because it's the highest-ranked chicken chain in the nation, but Chick-fil-A's founder, Truett Cathy, actually invented the chicken sandwich in 1964. The birth of the iconic sandwich happened as many wonderful things do: as a solution to a problem. While running a restaurant called The Dwarf Grill in an Atlanta suburb, Cathy turned a shipment of chicken breasts that were too large to serve as airline food into a quick meal for shift workers. After experimentation, he discovered a commercial pressure cooker would get the job done in as little as four minutes. 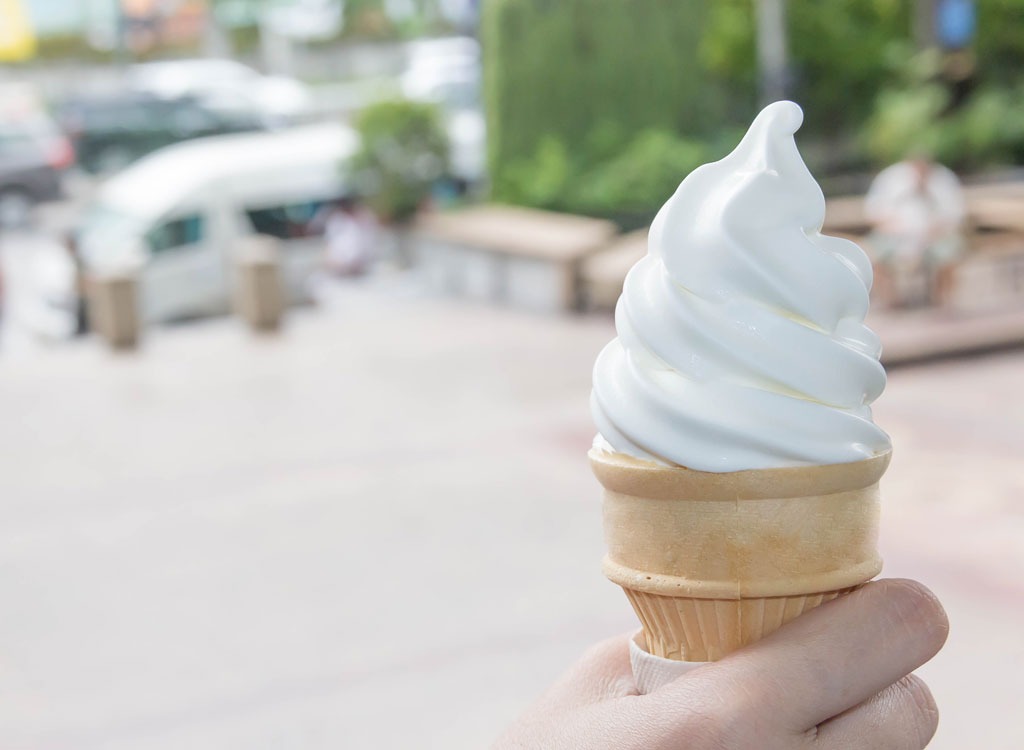 Whether you're taking the kids out to eat or ordering a kid's meal for yourself, you can get a free ice cream cone. Simply walk up to the counter and trade in your toy. If the toy is too good to pass up, splurge $1.65 for the cone.

The chain is getting healthier 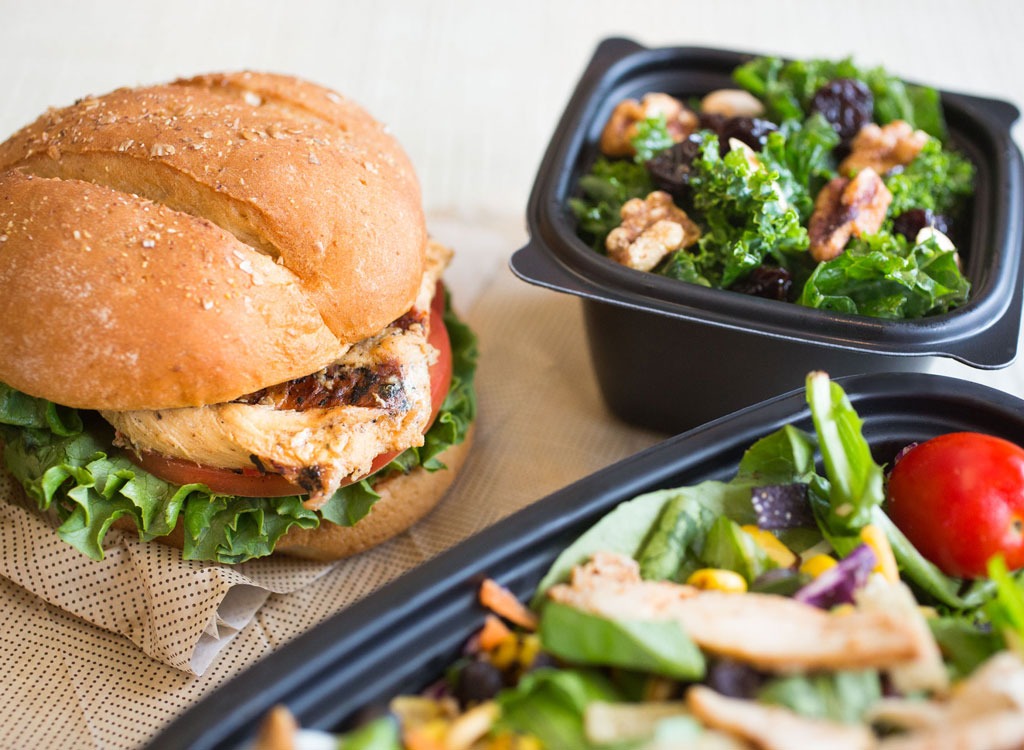 Way back in 2008, Chick-fil-A removed trans fats from their menu. These days, it's also been diminishing its use of corn syrup, artificial dyes, antibiotics, and some preservatives, but is actually keeping the progression quiet in fear that customers will notice a change in taste.

While the chain is known for their fried chicken sandwiches, it also has a wide variety of healthier options including a new Lemon Kale Caesar Salad topped with grilled chicken. Here are 12 Healthy Chick-fil-A Orders, According to Dietitians. 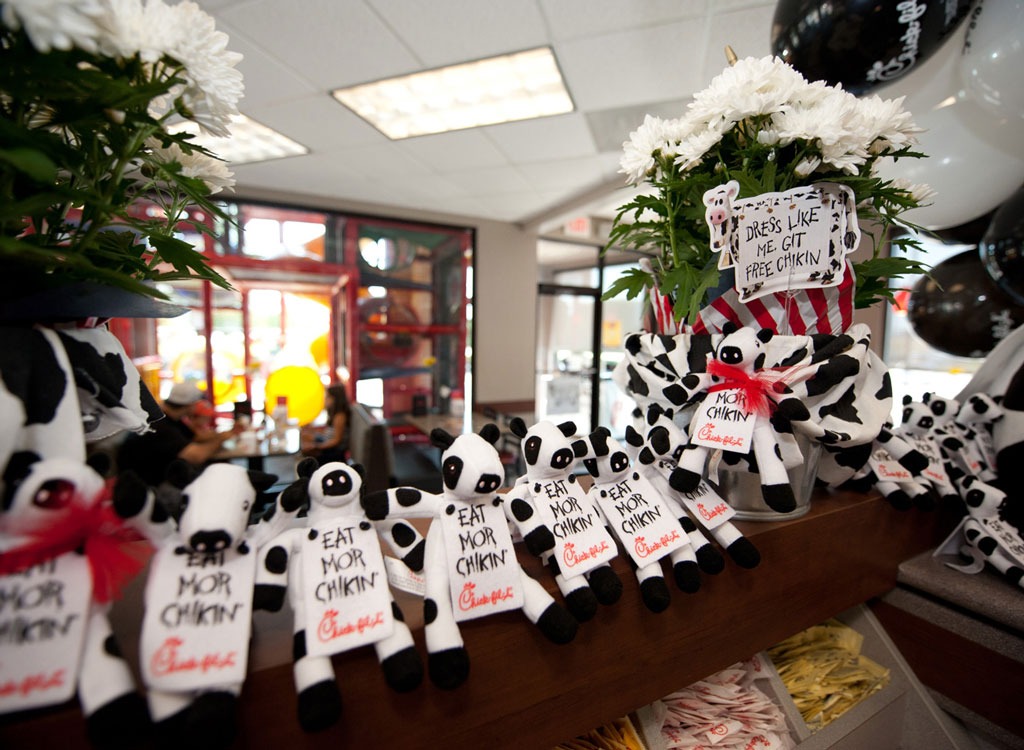 In previous years, you might have seen people walking around in cow costumes at the mall and wondered what kind of strange convention was in town. Most likely, it was just Cow Appreciation Day. Every year in mid-July, Chick-fil-A chooses a day and declares it a holiday, giving out free food to those partaking with a costume. In 2021, the celebration was postponed due to the continuing pandemic, but according to the Chick-fil-A blog, they hope to bring it back in 2022. Start planning your moo-velous costume now!

The chicken sandwich recipe is locked up 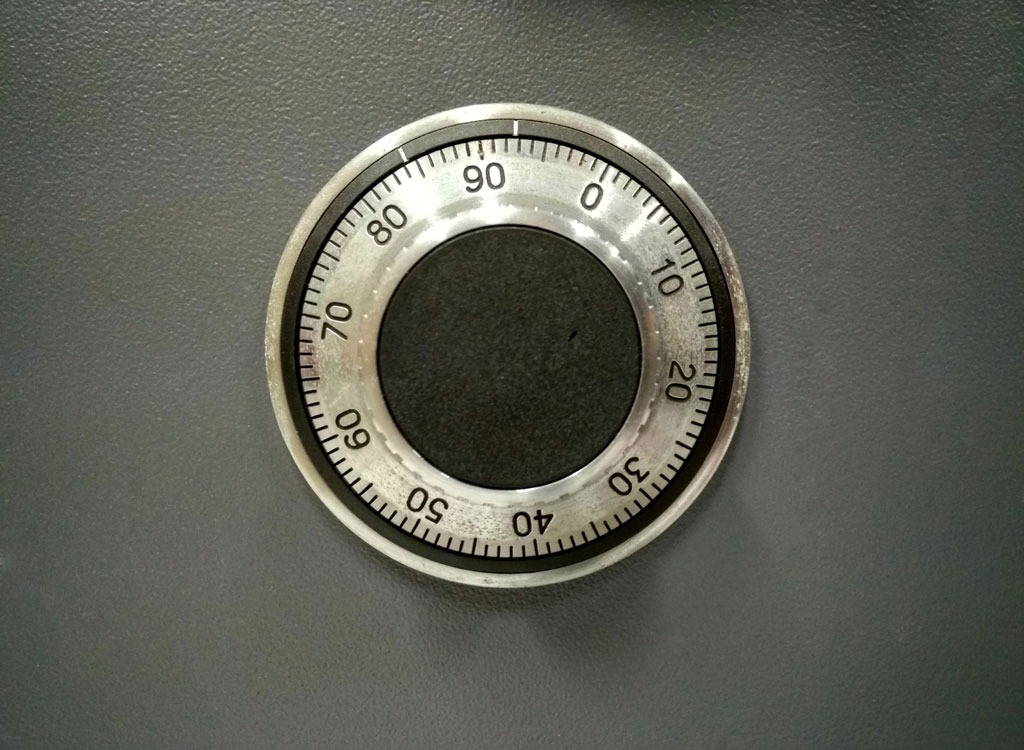 Similar to the Krabby Patty recipe at the Krusty Krab, the recipe for the Chick-fil-A Chicken Sandwich is locked in a safe in the company's Atlanta headquarters. This means the endless copycat recipes online may not be so accurate, but also, the chain's recipe hasn't changed in 50 years!

The name has meaning 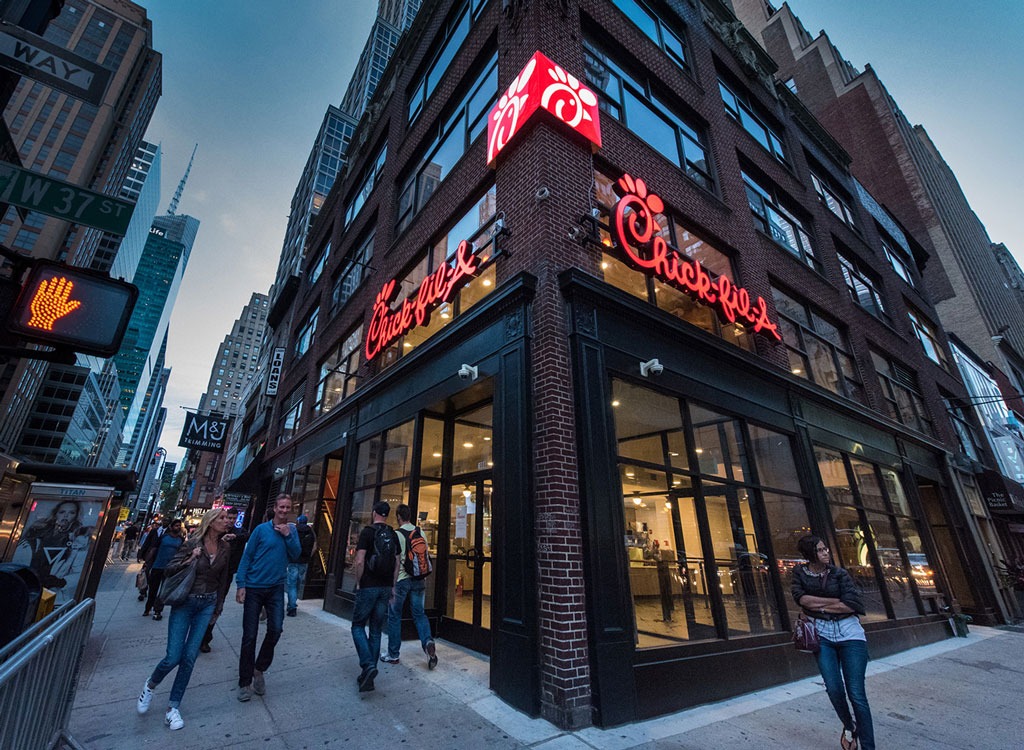 Have you wondered where the restaurant's name came from? It turns out, when founder Cathy was coming up with a name, he compared the chicken breasts used to the best cut of beef: a beef fillet. The "A" was capitalized to signify that the restaurant serves the best quality of food, and Chick-fil-A was born! 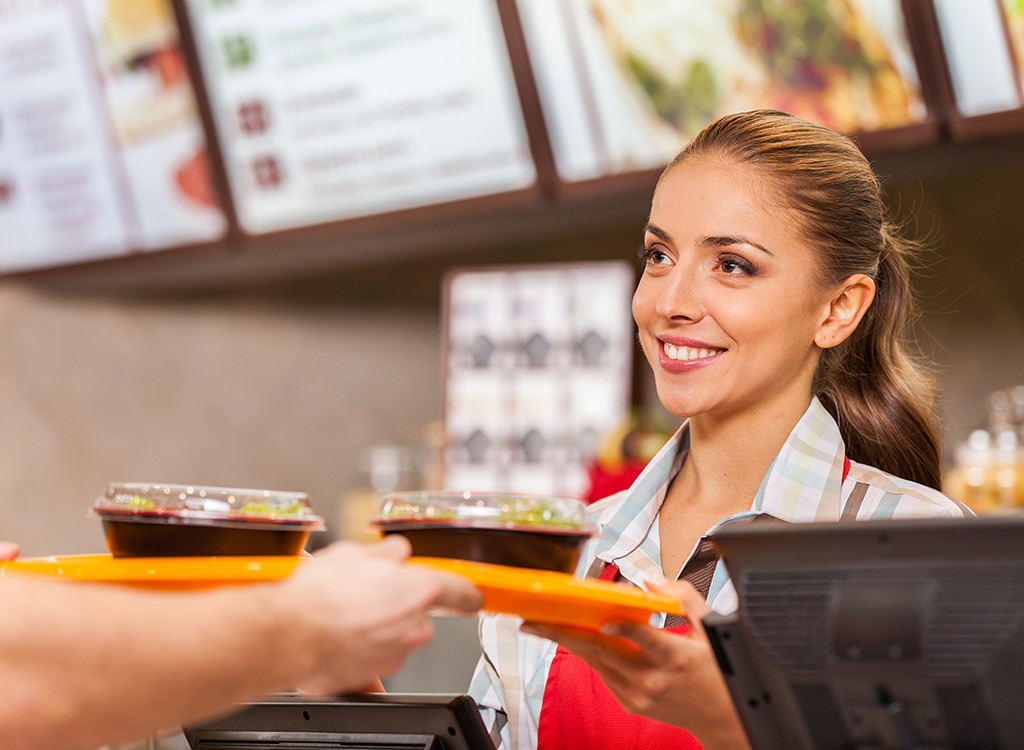 Ever notice how instead of saying "You're welcome" after you say "Thank you," Chick-fil-A servers respond with a pleasant "My pleasure"? According to a Chick-Fil-A employee and Reddit user @noexqses, the fast-food workers' excessive politeness isn't actually required. "Saying 'my pleasure' is not mentioned in the official training at all. It's a learned behavior," the employee spilled. 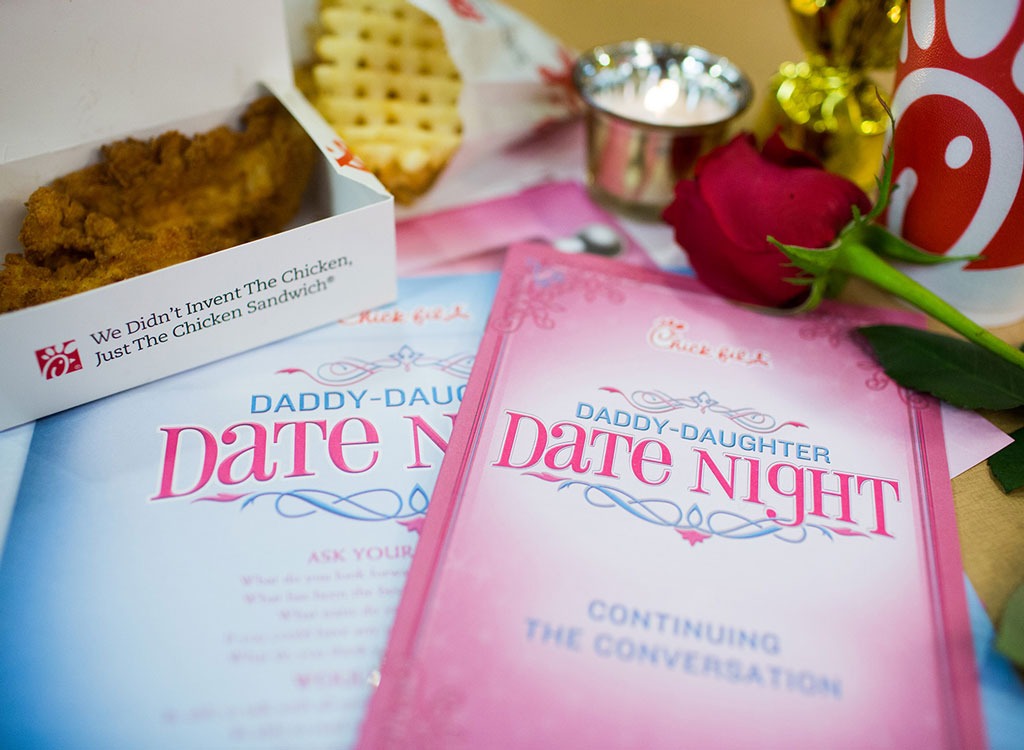 If you've heard of a daddy-daughter dance at school, this is the same thing… but with chicken nuggets. Chick-fil-A locations around the country have a special night once a year just for fathers and their daughters. Restaurants go all out, offering different special touches like a red carpet or live music. This year, the pandemic forced Chick-fil-A to get creative, with some locations offering a limited number of free take-home kits to create a memorable experience at home using craft ideas, an activity sheet, placemats, and more.

For more, check out The #1 Unhealthiest Sandwich to Order at Chick-fil-A.