It's been said that "one is the loneliest number." But could it be the healthiest, especially when it comes to trying to reach your weight-loss goals? Well, it depends, according to research and the experts we spoke to. One thing is certain though: there are just some things that should never be said to someone who is trying to lose weight, so perhaps keeping your weight-loss plans to yourself isn't necessarily a bad thing to avoid getting that dreaded weight loss "advice" or feedback you didn't really ask for.

See, those who have healthy eating and activity support from friends and co-workers lose more weight and keep it off, research in the journal Obesity found—and the opposite is also true (less support and undermining weight-loss strategies leads to more pounds).

"While you might expect friends and family to be totally supportive, it's not always the case. In fact, I have advised some of my clients to avoid sharing their weight loss intentions with others as they can, in some instances, sabotage them: Bringing treats around, telling them to loosen up and 'live a little,' or exhibiting jealousy, which hurts," says nutritionist Rania Batayneh, M.P.H., the owner of Essential Nutrition For You and the author of The One One One Diet. 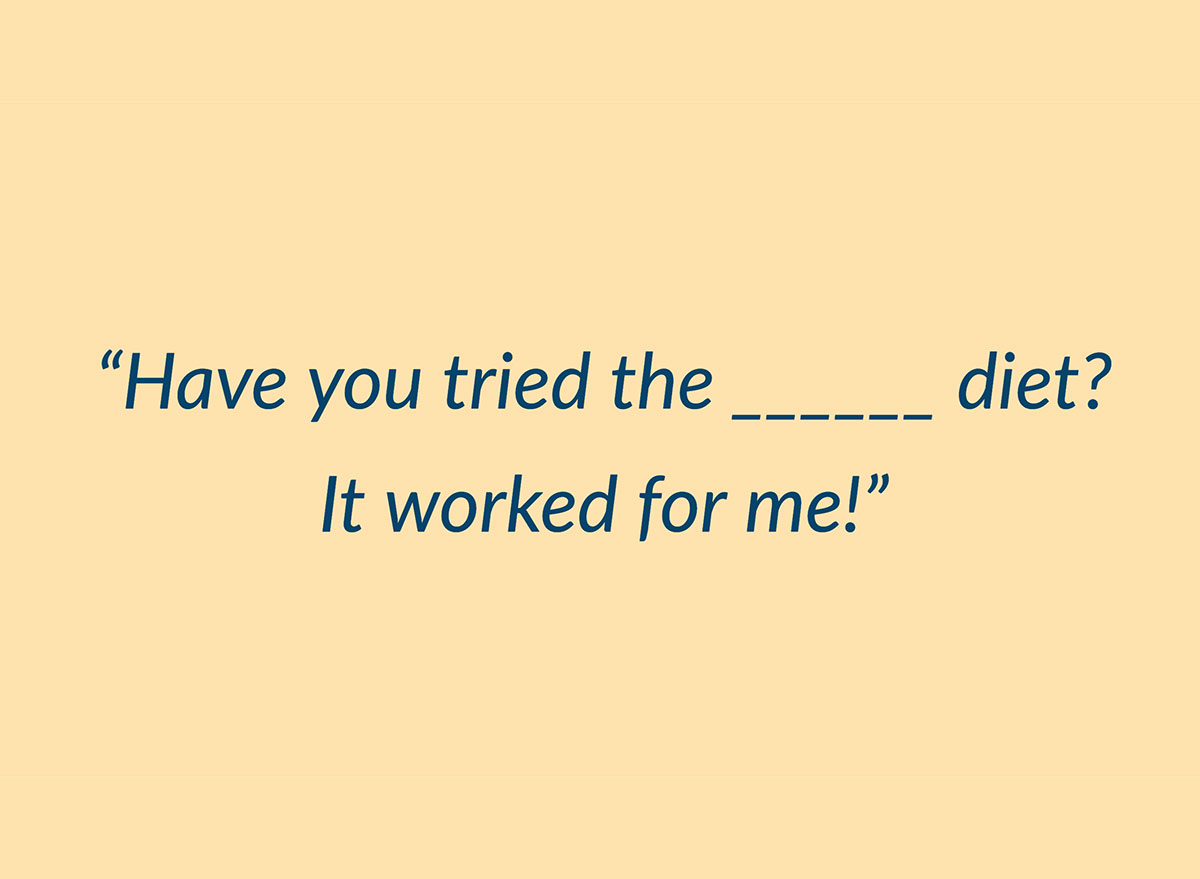 Say "ciao" to crash diets, especially when this advice is coming from others, as every person's weight-loss strategy is different. But one thing is for sure: fad diets aren't ever a good idea.

"The goal is not to go on the latest fad diet. The goal is the find an approach to healthy eating and activity that can be sustained over time. Diets do not lead to permanent weight reduction without changes in habits and attitudes," says Bob Wright, director of education at Hilton Head Health in Hilton Head Island, South Carolina. 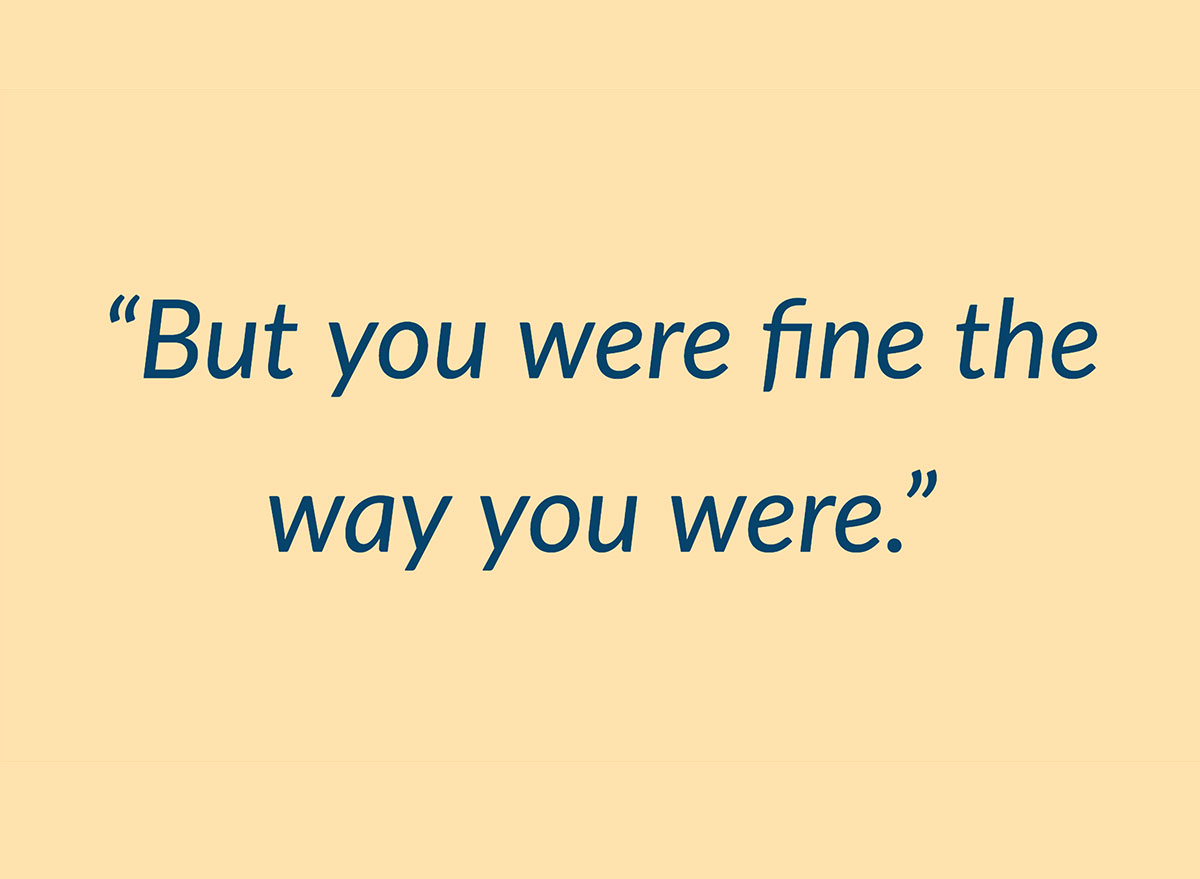 It's crucial to "avoid statements that doubt the person's capability to get and stay healthy and avoid implying they will be worse off in any way than when they started," says Jillian Michaels, a health, wellness, and fitness expert and the creator of the My Fitness by Jillian Michaels app. And this is coming from someone who's been very public about her health journey—and who has helped some of The Biggest Losers in America. 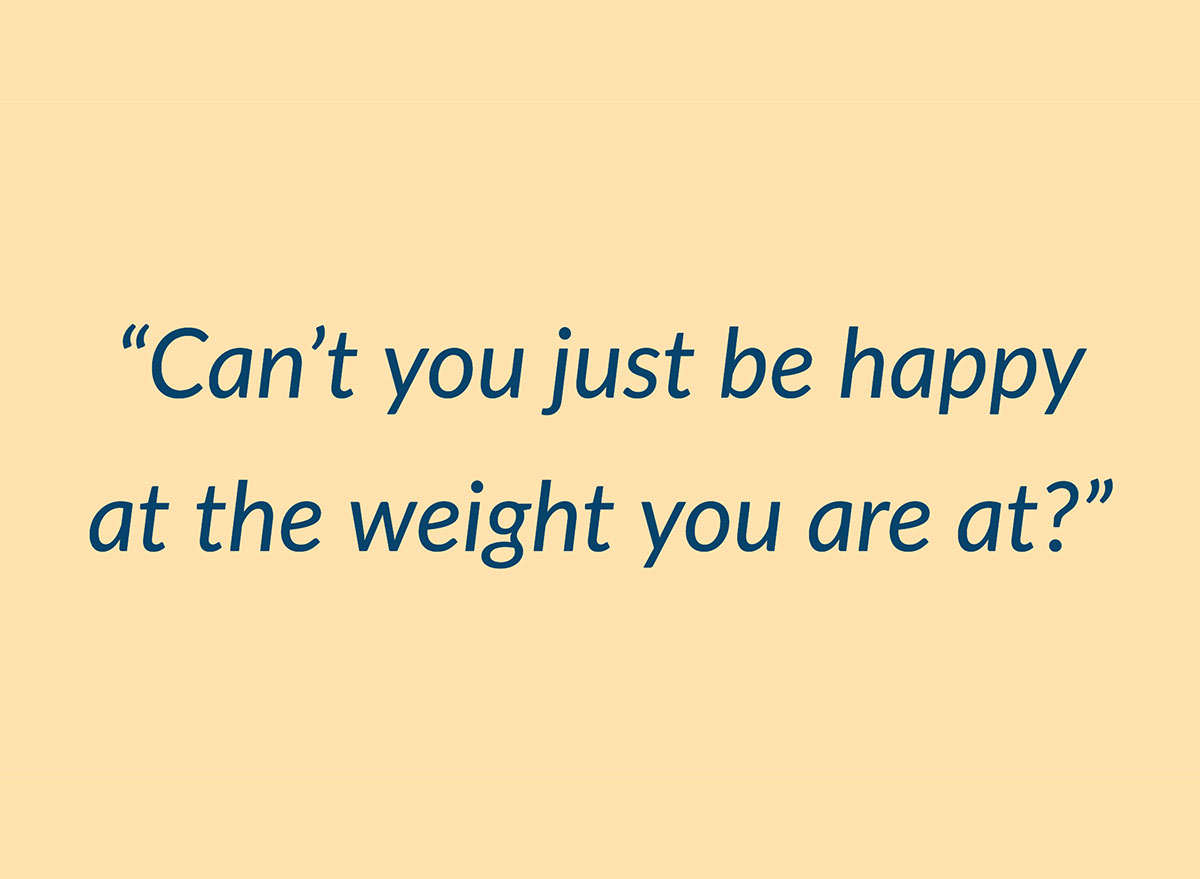 Similarly, this seems like it could be a sort-of compliment, but it's simply harmful.

"While this may seem like your friend is telling you that you are 'fine' the way you are, there is also this tone of 'Just stop all of this!' or 'Why do you keep trying?' If your friend feels comfortable enough to tell you that they are excited to lose weight but feel it can be challenging to stay consistent, they are probably looking for support, not questioning your intentions," Batayneh says. 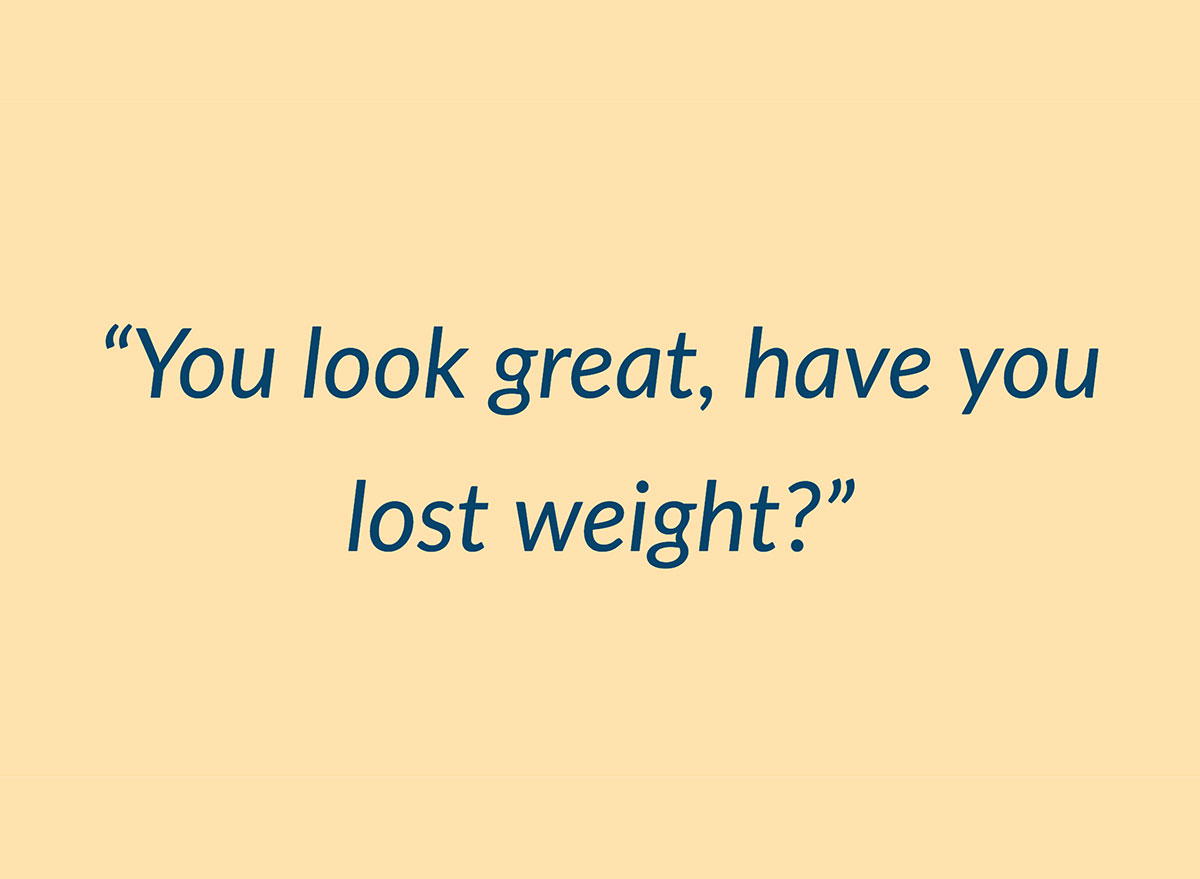 "This suggests that your friend looked bad before," Wright says. "Also, there is a chance they haven't lost weight, and then it would suggest that they need to." 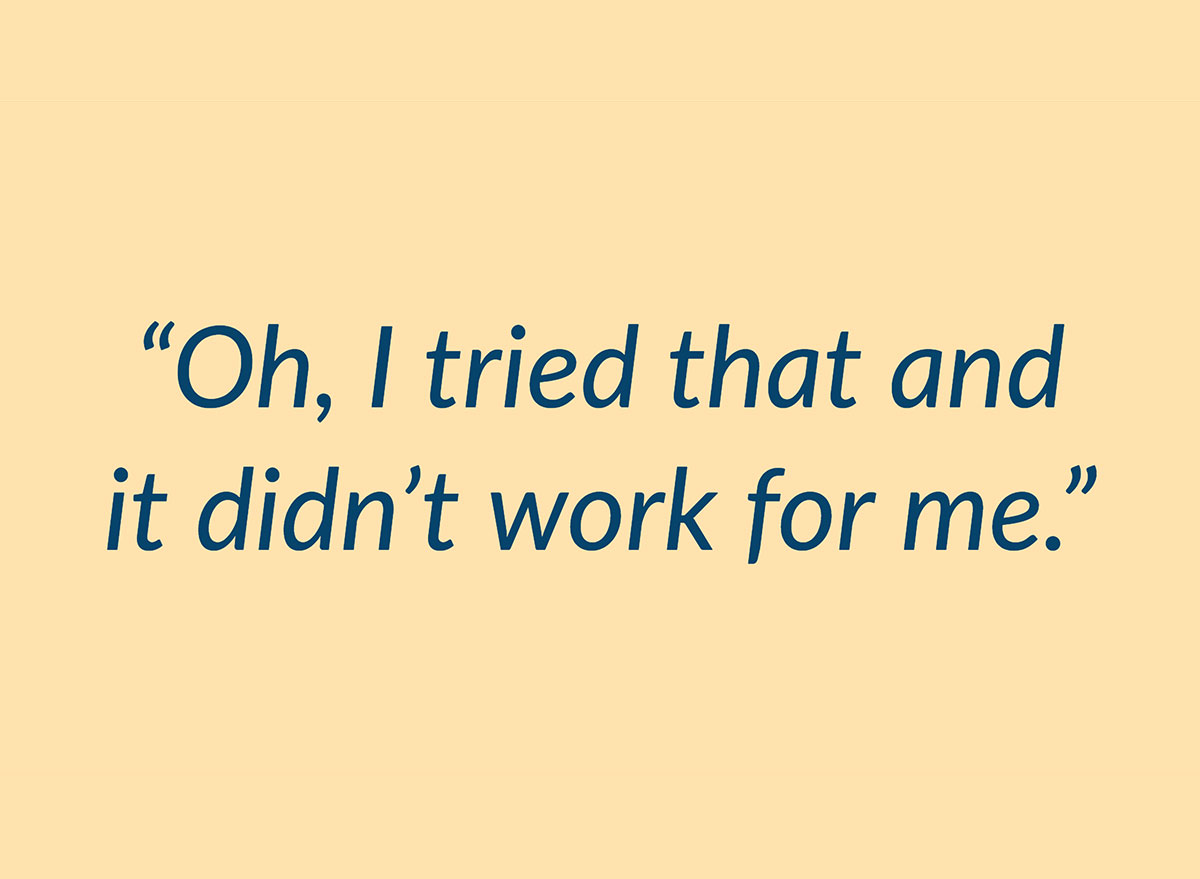 Think of each weight loss mission like snowflakes: No two are alike.

"Your experiences are unique," Batayneh says. "For example, perhaps your friend eats healthier carbs rather than eliminating them entirely." So even if something didn't work for you, it might for someone else, and it's not really fair to compare your experiences to someone else who is trying out something new. 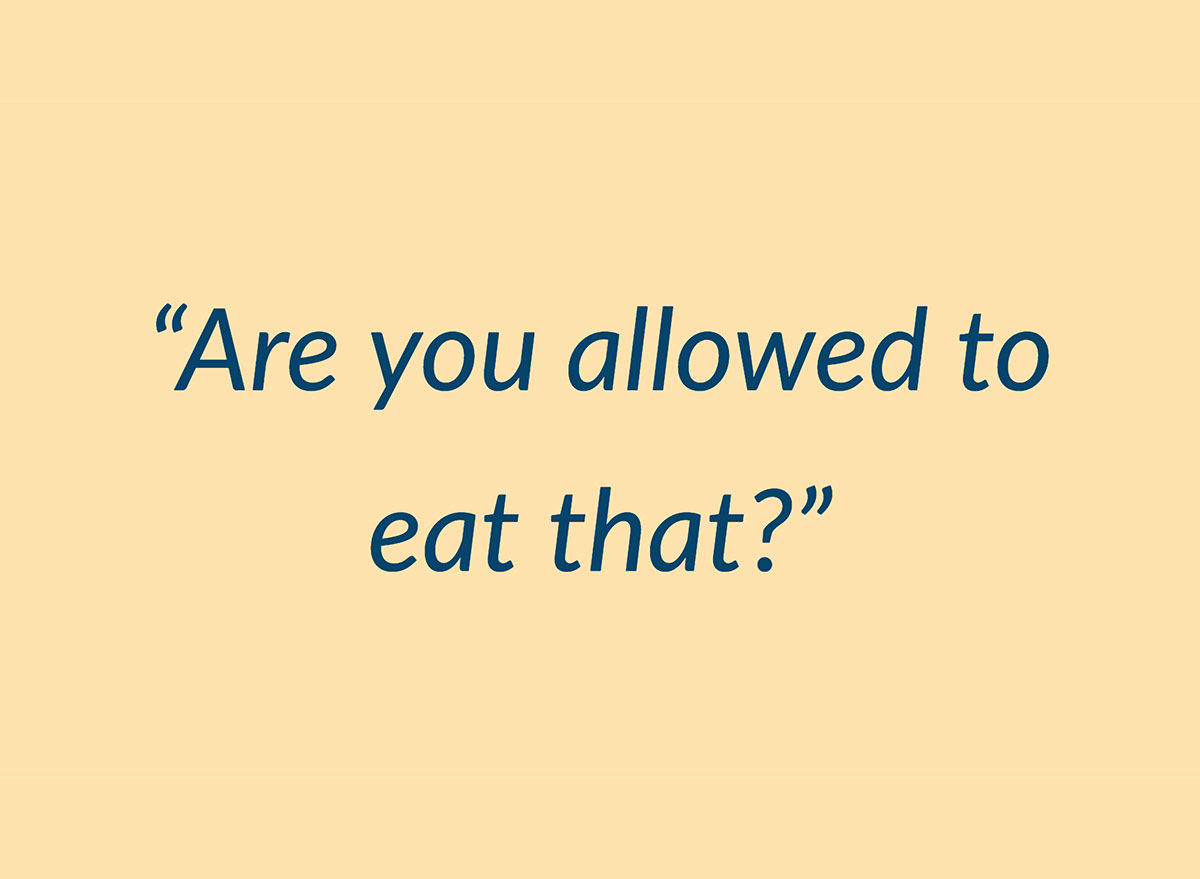 Nothing needs to be off-limits, and the tone of this question is just very harsh and unnecessary.

"This question is very judgmental; in fact, anyone is allowed to eat what they want! Comments like this often backfire, and their response might be to eat even more than they planned, due to an 'I'll show you' attitude," Wright says. 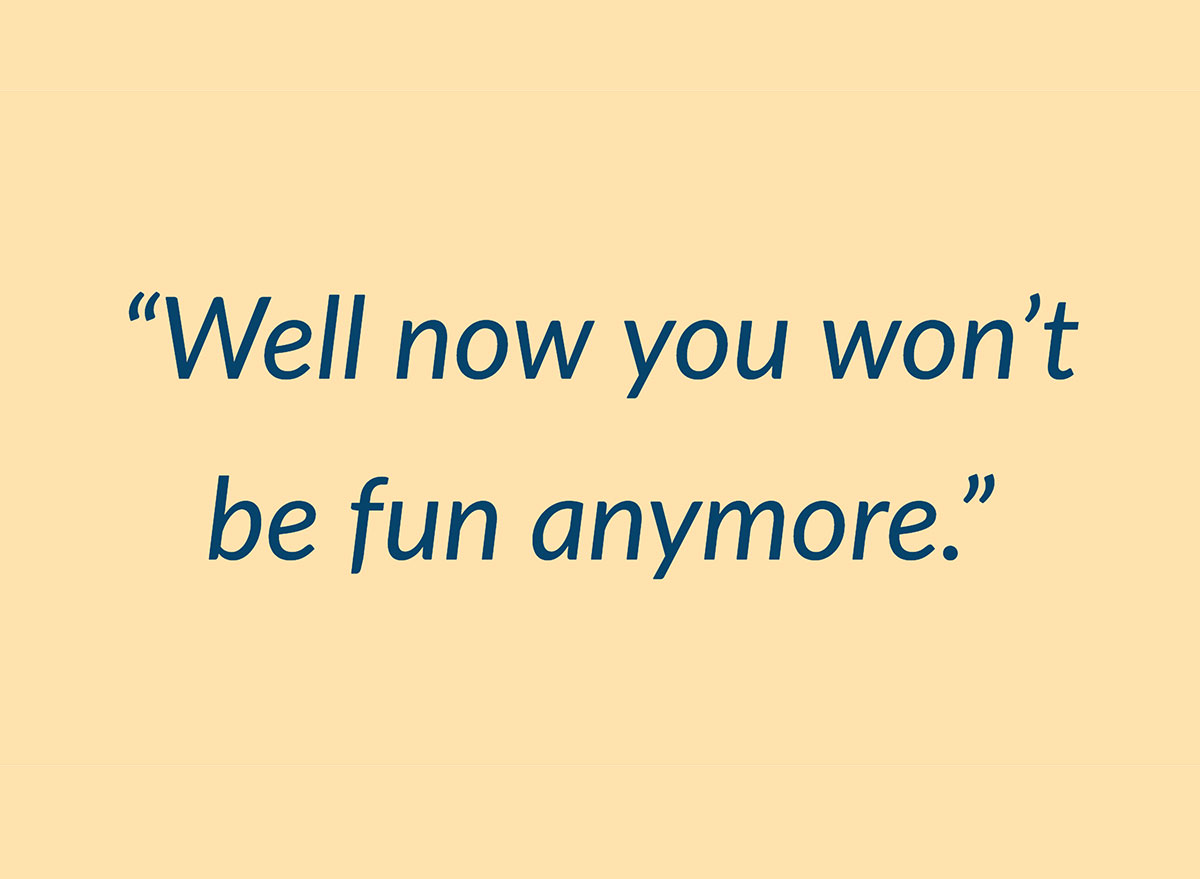 This is exactly the opposite message you want to send a pal who's dropping pounds, Michaels clarifies.

"This is discouraging and implies the person will be worse off once they've lost the weight," she says. "Just compliment them. 'You are so inspiring' works well. It's really simple. Compliment their health and their efforts." 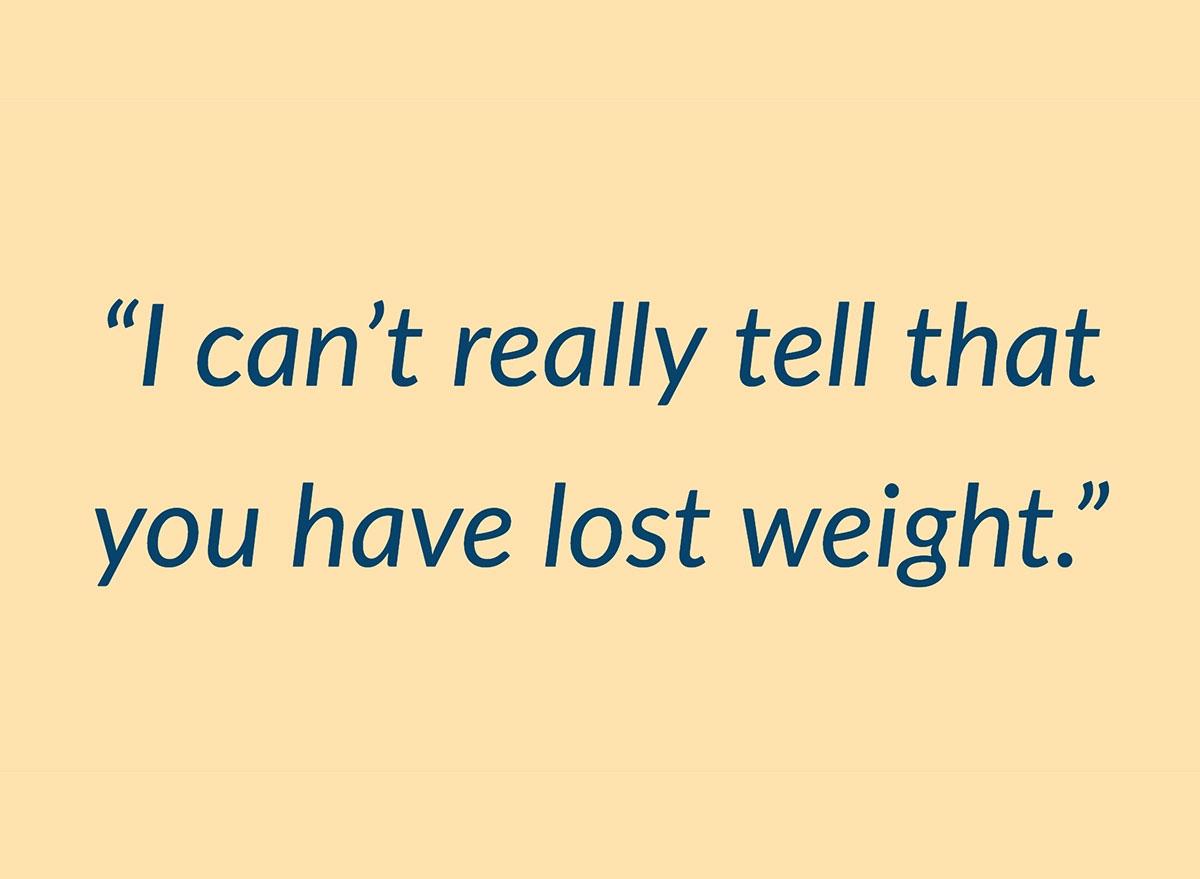 "When someone is on a weight loss journey, they feel changes greater than what they see on the scale. Your friend, co-worker, or sibling may have more stable energy, less cravings, or sleep better. If you are negative toward then, this may derail them," Batayneh says.

Instead, remember to just c'mon, get happy.

"In my practice, I always highlight the positives that my client is accomplishing and is consistent with. We all know when we ate too much, went off on a binge, or just ate totally off plan. It's in the past, and we can only make better choices ahead," she adds. 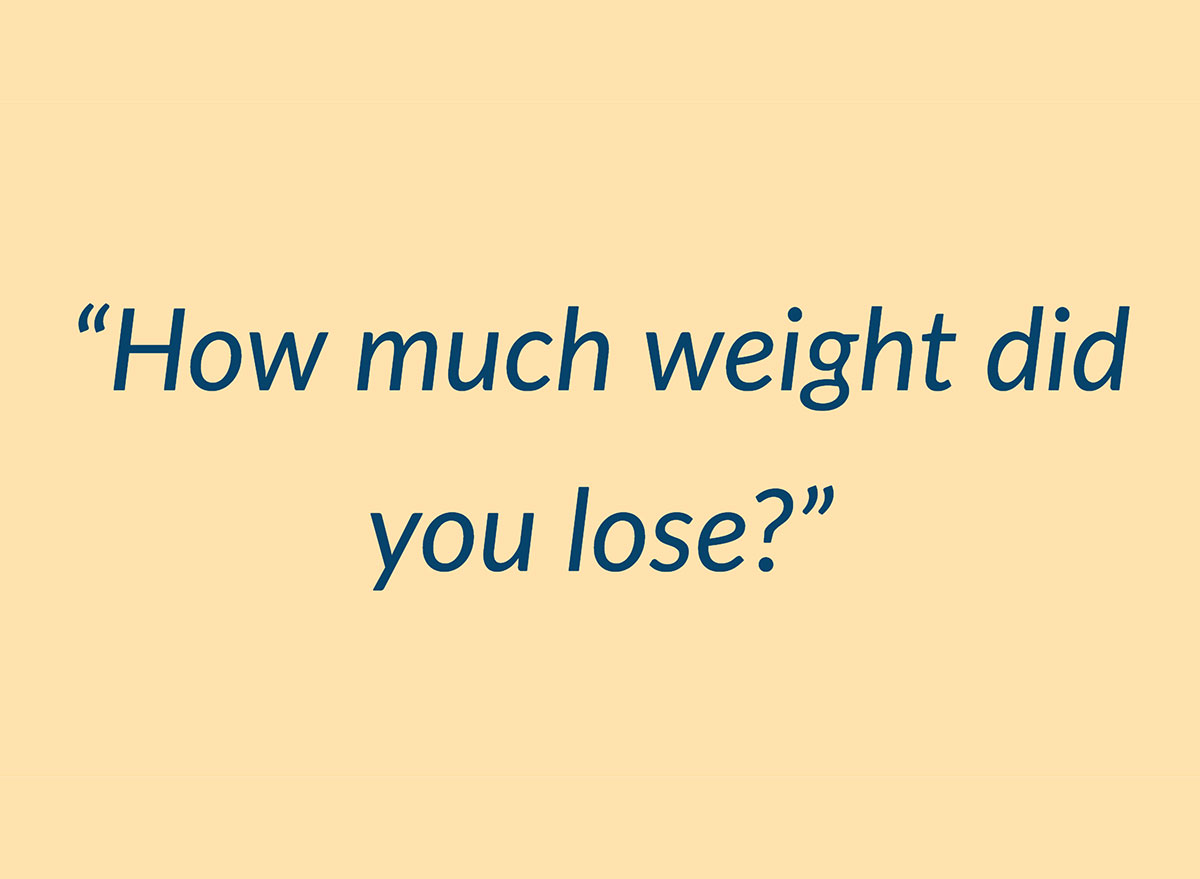 The scale results are only part of the goal, and this question puts the focus solely on weight.

"The rate of weight loss per week varies greatly from person to person. Over the long-run, weight loss is never steady and consistent. Plateaus are a part of every weight loss effort," Wright says.

Because that's the case, Wright and the Hilton Head Health crew encourage their guests toward a health pursuit to find non-weight ways to monitor progress. Consider inches lost, speed gained, and more.

"Weight loss is a by-product of changes in behaviors, habits, and attitudes," he continues. 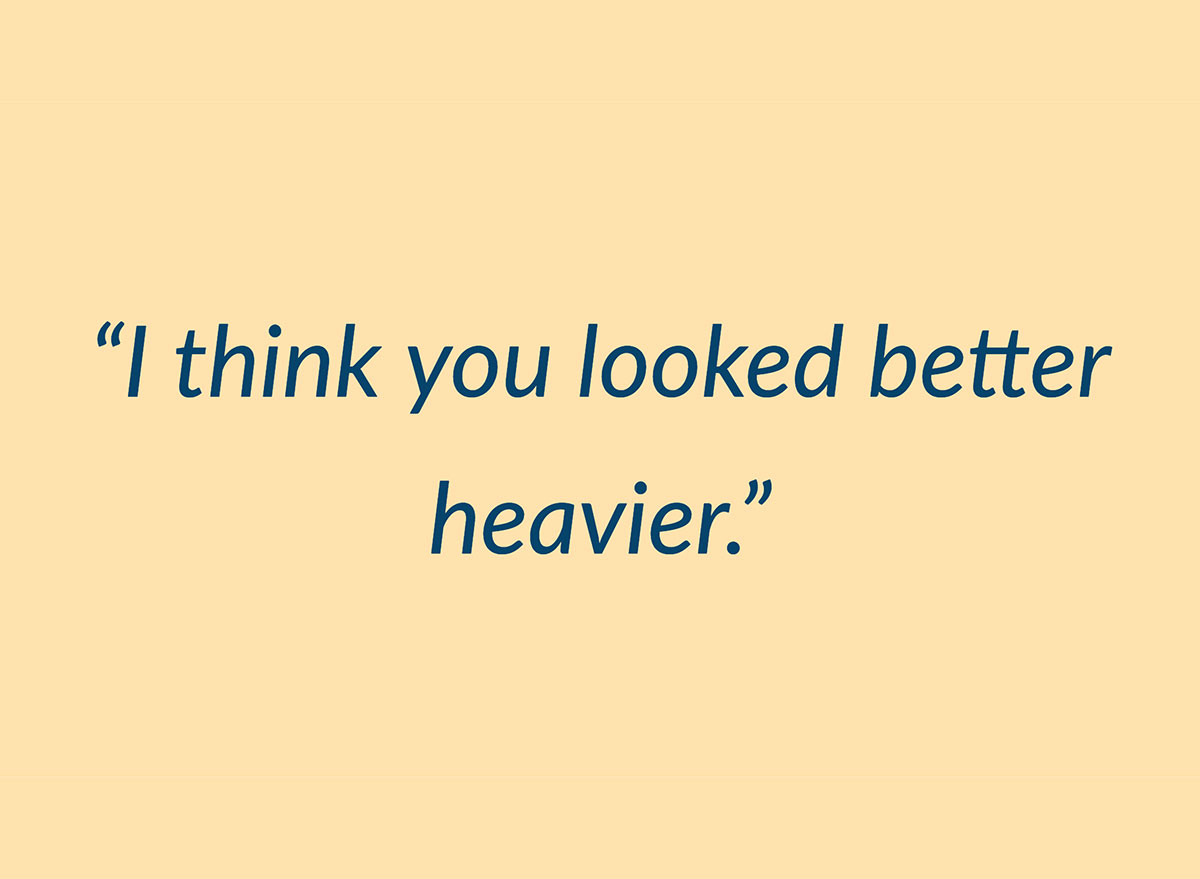 "For some people, losing weight is this life-long dream, achievement, and accomplishment. If they have lost weight by working hard, eating right, [and] managing life and social situations, you had better believe that they are proud of themselves," Batayneh says.

There should never be a reason to hide your hard work.

"Most of us want someone to notice the changes we have experienced physically. I know that we shouldn't focus on the outward appearance, but when we feel good, we look good," she says. "If you feel that your waist is smaller and your arms are toned—and you want to show off your hard work—do it!" 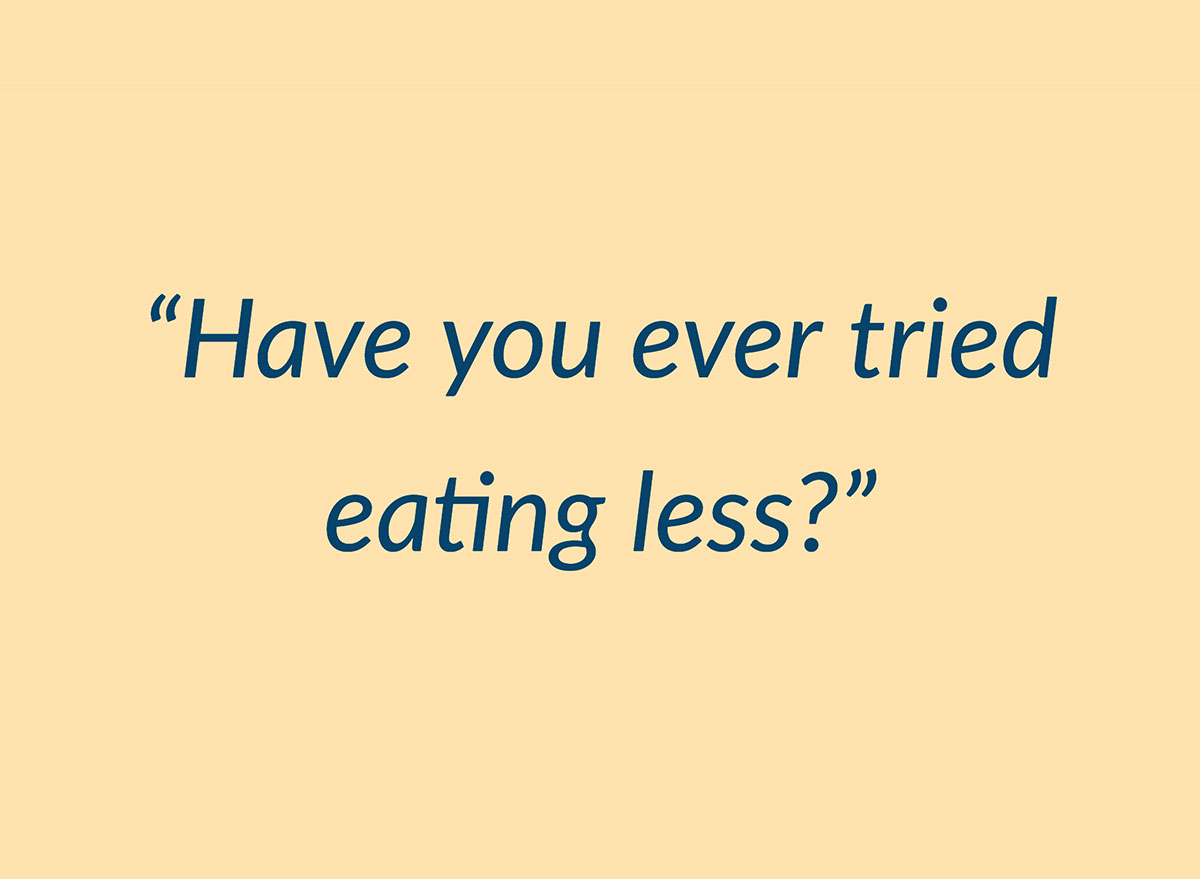 Not only is this uber-judgy, but it can also be inaccurate advice—and downright dangerous. Eating too few calories has been proven to cause your body to hold on to weight, plus this statement could be triggering to anyone who has a history of struggling with an eating disorder.

According to research published in the journal Perspectives on Psychological Science, extreme day-to-day calorie restriction can slow metabolism and speed up cravings. Because it's all about the big picture, and the fact that nearly a million calories need to be consumed per person each year to survive, the scientists suggest looking at larger habits (say, incorporating activity into your day or adding more satisfying, high-protein foods to your diet) rather than counting each and every calorie at a meal.

"The strategy anyone uses to lose weight should guide, not deprive," Batayneh says. 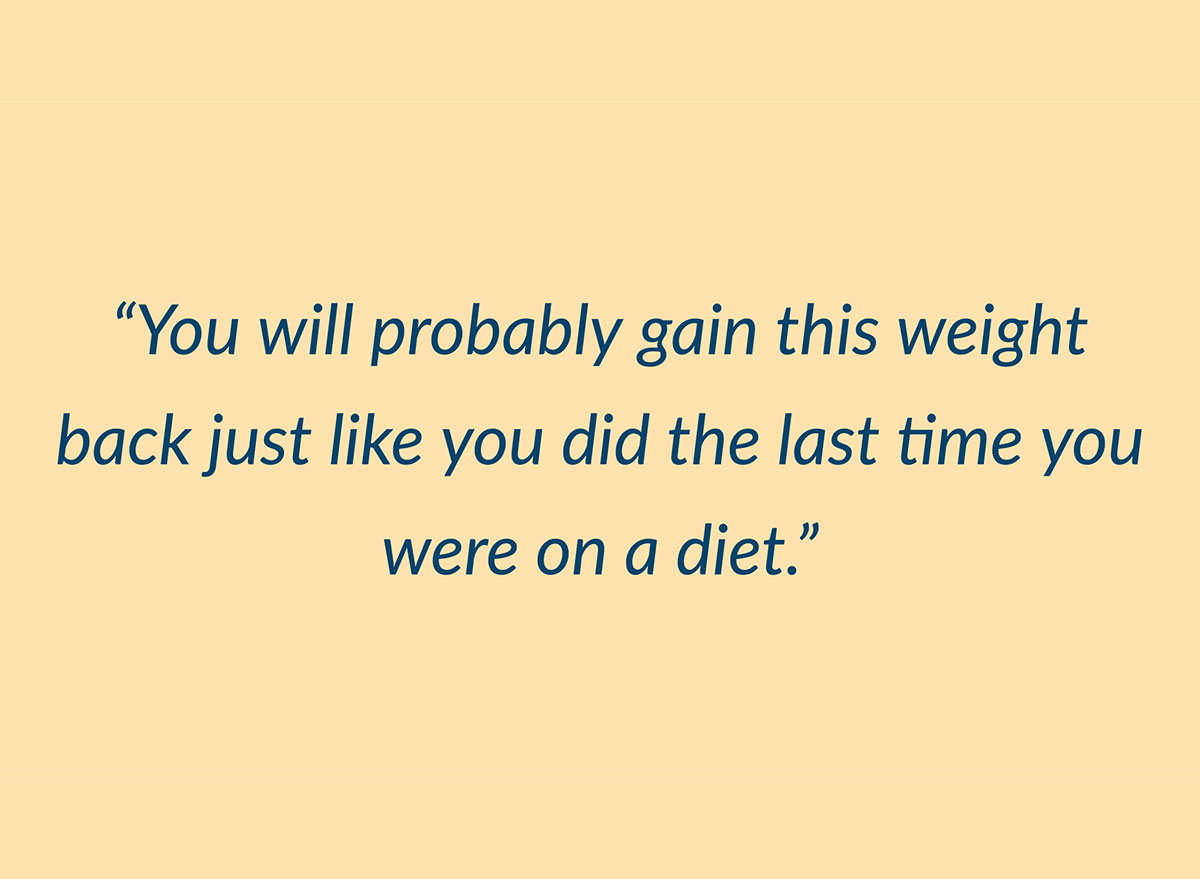 "If someone is saying something passive aggressive, negative, or paying backhanded compliments, try not to take it personally. This is about them projecting their insecurities onto you—and it's no reflection on you," Michaels says.