On the flip side, a deficiency in the major male sex hormone—a condition that burdens some 13.8 million American men over the age of 45, according to US census data—is, well, far from sexy. Side effects of "Low-T" include low libido, limp erections, hair thinning, muscle loss, fat gain, depression …

In fact, one Heart study found that that the lower a man's testosterone levels, the higher his risk of death from any cause—heart disease in particular. Adding insult to injury, the Food and Drug Administration says there's little evidence that testosterone drugs are beneficial.

The good news is you can boost your testosterone naturally, and diet plays a key role. So grab a pen, jot down a grocery list of these Eat This, Not That!-approved, T-boosting foods and get ready to unleash your hard-wired alpha male.

There's a reason why Olive Oyl was totally smitten with Popeye, and it may not have been his bicep muscles (wink!). Spinach is one of the best dietary sources of magnesium, a mineral involved in muscle development that's essential for reproductive function in men both young and old, active and sedentary.

One study that compared athletes to non-active individuals found that supplementing with 22 mg magnesium per pound of body weight of the course of four weeks raised testosterone levels in both groups. And two separate studies, one on a group of men over the age of 65 and a second on a younger 18-30 year old cohort, present the same conclusion: levels of testosterone (and muscle strength) are directly correlated to the levels of magnesium in the body.

T-Boosting Tip: Take a cue from the sailor man and load up on leafy greens. Just one cup of cooked spinach provides nearly 160 milligrams of magnesium—half your recommended daily intake of 420 mg, and twice what you'll find in the equivalent serving of kale! You can add it to a smoothie!

RELATED: We found the best smoothie recipes for weight loss.

It's perhaps no coincidence that Giacomo Casanova, who was said to eat 50 oysters for breakfast each morning, reportedly bed half of Europe. After all, oysters are brimming with zinc, a mineral that elevates testosterone while simultaneously boosting growth factor hormone—both of which enhance muscle growth and physical performance (in and out of the bedroom).

One study showed that six months of zinc supplementation among slightly zinc-deficient elderly men doubled serum levels of testosterone. And another eight-week trial found that college football players who took a nightly zinc supplement showed increased T-levels and increased leg strength that was 250 percent greater than a placebo! Holy quads, Batman! Research has also shown deficiencies in zinc to be a risk factor for infertility caused by low testosterone levels.

T-Boosting Tip: Get your shuck on at happy hour. Just a half dozen oysters on the half shell will provide you with 33 mg of zinc, nearly three times the 12 mg RDA for adult men. 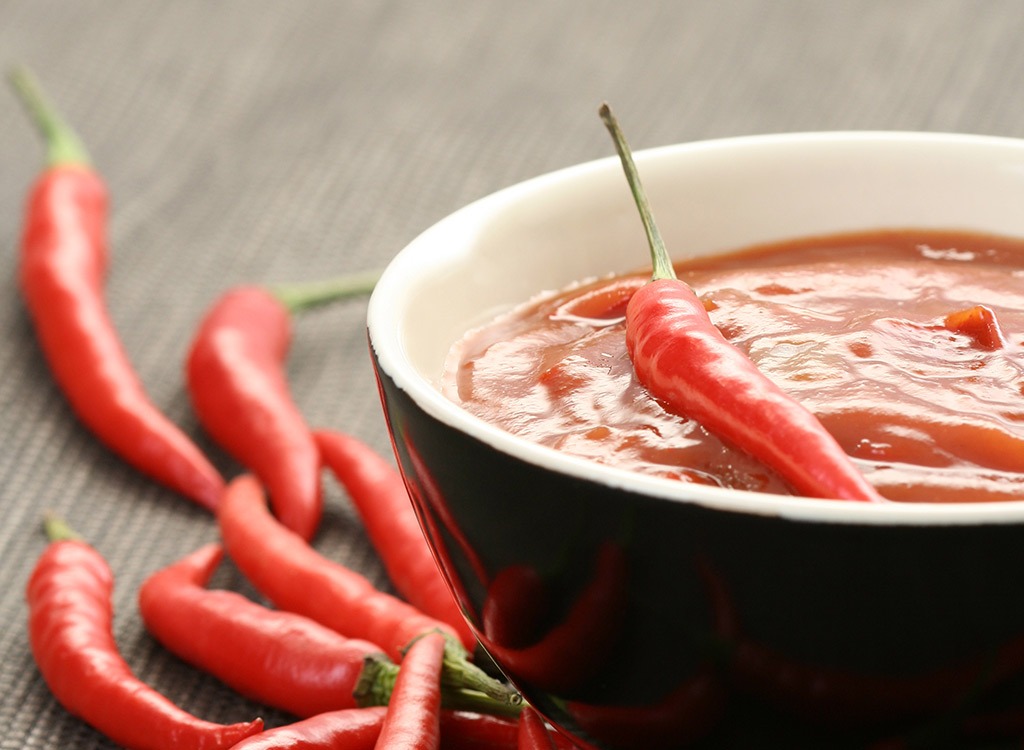 How alpha are you? Well, how many shakes of hot sauce can you handle? A recent study from France found men who have a taste for spicy foods tend to have higher testosterone levels than those who can't handle the heat. Of the 114 male participants surveyed, researchers saw a clear correlation between frequent hot-sauce usage and higher T-levels. Study authors suggest the findings may be due in part to capsaicin—the fiery compound in chili pepper that previous studies have associated with increased testosterone levels. In animal studies, capsaicin has also shown to increase the size of sex organs, while simultaneously decreasing belly fatbelly fat. Yowza!

T-Boosting Tip: Make it hot! Fresh chilis contain the most capsaicin, but hot chili pepper sauces, like Tabasco, are another good option. The hotter the sauce (or pepper), the more T-boosting compounds.

A side of garlic knots or onion bread can boost your sex drive … just make sure your date has a slice, too! Studies suggest a compound in the stinking rose triggers the release of luteinizing hormone, which regulates production of testosterone. One study showed supplementing with garlic as part of a high-protein diet could substantially boost testosterone levels. And a recent animal study found just 1 gram of onion per kg of body weight could boost T-levels by over 300 percent in just 20 days. Garlic and onions both contain the chemical diallyl disulfide, which stimulates the release of a hormone that spurs the production of testosterone.

T-Boosting Tip: Fresh garlic and onion contain more nutrients than the powdered stuff, and slicing into the bulbs releases the phytochemicals. Consider buying fresh, minced garlic packed in oil, which preserves all the nutrition. And don't forget breath mints!

Bikinis, models, nuts … Is there anything Brazilian that's not sexy? Selenium is a trace mineral found in Brazil nuts that plays an important role in hormone health. You only need a tiny bit for healthy sperm, but a tiny deficiency can be catastrophic for reproductive health. In one study, men who had lower testosterone and were infertile also had significantly lower selenium levels than the fertile group. Supplementing with the mineral improved chances of successful conception by 56 percent. And a second study that included 69 infertile men with low levels of the mineral, found selenium supplementation could significantly improve sub-par sperm motility associated with testosterone deficiency. Moreover, 11 percent of the men successfully impregnated their partners during the trial!

T-Boosting Tip: Bust a Brazil nut! Men need at least 55 micrograms of selenium a day, and you'll get 68 to 91 mcg in just one creamy Brazil nut. So don't go too nuts. The upper limit for daily selenium intake is 400 mcg and could cause selenium toxicity.

Cruciferous vegetables like broccoli are rich in indoles, anti-cancer compounds that indirectly boost testosterone production by breaking down and flushing the system of excess estrogen, which inhibits the production of male sex hormones. As men age, their estrogen levels gradually rise, while testosterone levels fall. Indoles can help strike the balance. In one study, supplementing with indole-3-carbinol from cruciferous vegetables for just 7 days cut the estrogen hormone estradiol in half for men. Another study found indole supplementation significant increased urinary excretion of estrogens among men. 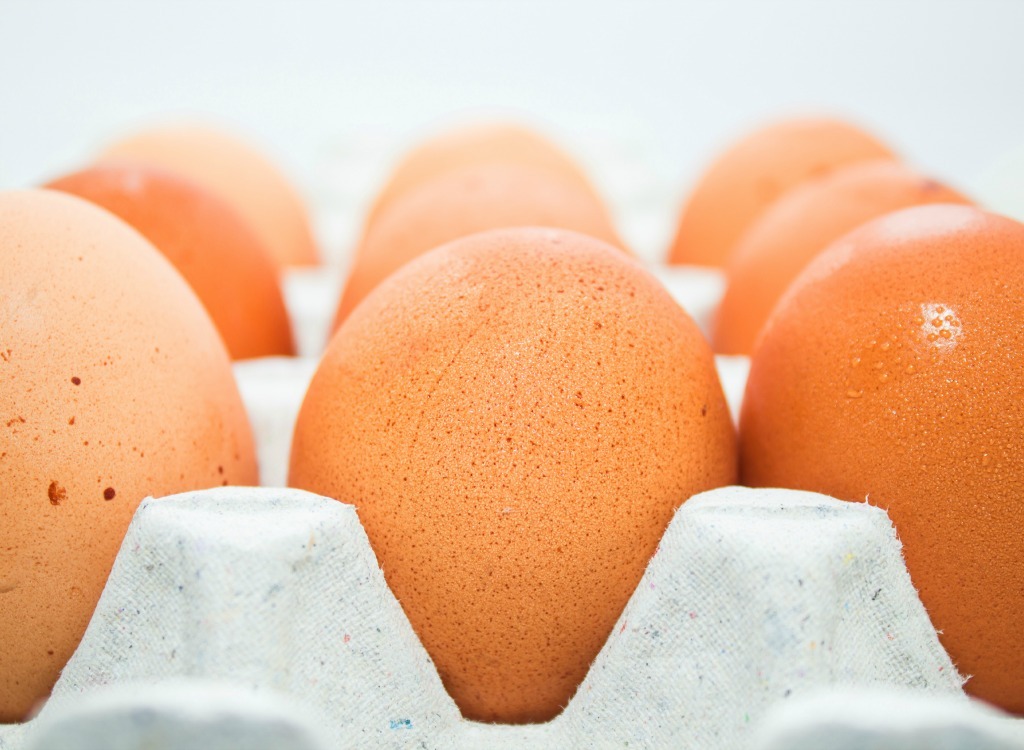 Eggs often come up in reproductive health discussion. This time we're talking about dietary eggs, as in omelets, and the role they play in boosting testosterone. The hormone boost from eggs comes primarily from the yolks, which are rich in dietary cholesterol, mono- and saturated fats—nutrients once demonized by health experts that have since proven to positively influence waistlines and hormone-health.

In fact, studies on vegetarian and low-fat diets both show reduced testosterone levels of about 12 percent. Where higher fat diets of at least 40 percent of calories, with a higher intake of saturated fat, show increased testosterone levels. Why? It's not rocket science. After all, cholesterol makes up the building blocks from which testosterone is formed; without it, the hormone simply can't synthesize. Organic eggs are one of the best dietary sources. In addition to essential fatty acids, a whole egg is rich in aspartic acid, an amino acid that triggers production of testosterone.

T-Boosting Tip: Don't leggo your eggo! The American Heart Association no longer condemns eggs in its guidelines, so enjoy a few whole eggs per week, any style you choose, as part of a healthy, balanced diet. And remember: the quality of fatty acids you get will only be as good as the quality of your eggs; so splurge on organic.