Keep disease at bay and maintain your flat belly with the help of these delicious superfoods!

Superheroes come in all shapes and sizes: Batman is tall and lean; the Teenage Mutant Ninja Turtles, are, well, really talented turtles; and fruits and veggies—probably the most powerful superheroes on the plant—are small enough to be held between your palms.

Though apples and artichokes can't fly through the sky like Batman or seamlessly execute Ninjitsu like Leonardo (he's the one wearing the blue bandanna), they protect us by nourishing our bodies with disease-fighting antioxidants that ward off the negative effects of aging and diseases like cancer and type 2 diabetes. But which fruits and vegetables pack the most potent punches? To find out, we dug through a giant database of ORAC scores (which is simply a measure of a food's oxygen radical absorbance capacity inside a test-tube) and identified the most powerful disease-fighting foods known to man! And after you're through reading through this list, learn how to stay forever young with the help of these 30 Foods to Eat to Never Feel Old!

While kids may turn their noses up at the stuff, the average American eats over 4 pounds of broccoli a year, according to the National Agricultural Statistics Service. And that's a good thing because there's significant evidence that broccoli can aid cancer prevention. Researchers attribute the anti-cancer properties primarily to its high ORAC score and sulforaphane content. The compound works on a genetic level to effectively "switch off" cancer genes, leading to the targeted death of cancer cells and slowing of disease progression. For more food that can ward off the big-C, check out these 7 Foods That Fight Cancer.

Eat This!: Pair boiled broccoli with a spicy food like mustard, horseradish, wasabi, or peppery arugula. These foods contain the enzyme myrosinase which is required for sulforaphane to form. 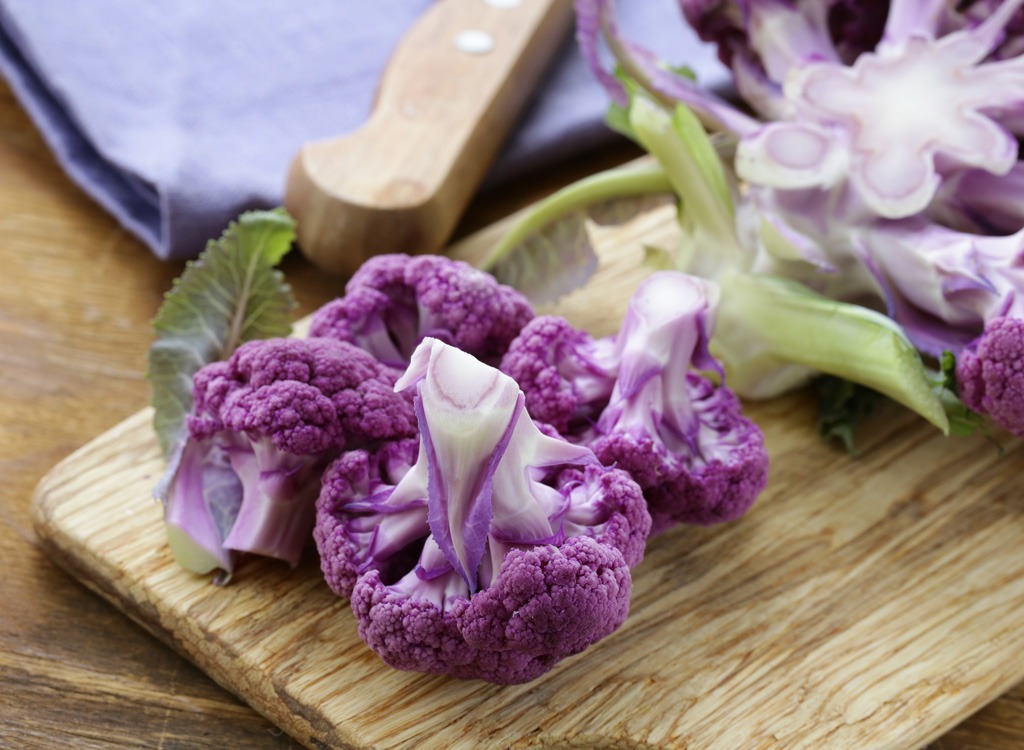 No, this cauliflower isn't covered in a crazy psychedelic mold, it's supposed to be purple—and we're huge fans! Not only does it add an unexpected pop of jewel-toned color to your dinner plate, this slightly sweet and nutty veggie also packs three times the antioxidant capacity than its white counterpart. Its rich color is all thanks to the antioxidant anthocyanin, which has been shown to bolster short-term memory, ward off diabetes and heart disease and calm the action of fat-storage genes. It's also one of our favorite high fiber foods, packing 4 grams of the belly-flattening nutrient per cooked cup.

Eat This!: Cut up the veggie and roast on a baking sheet until tender, just as you would "regular" cauliflower. We like to top our florets with minced garlic, extra virgin olive oil, and fresh lemon juice before popping them into the oven. You can eat the cauliflower warm with a protein and a whole grain like quinoa, or let the veggie cool off before adding it to a colorful, fresh salad.

While these small, squishy treats may not make a regular appearance on your grocery list, perhaps it's time they start. One Medjool date offers your body an average of 1.6 grams of energy-boosting fiber and a bit of potassium, vitamin B6, and magnesium, too!

Eat This!: Mix this dried fruit with some almonds or walnuts for a filling afternoon snack that's rich in protein, healthy fats, and fiber. Or if you feel like rolling up your sleeves a bit for something more involved, make a batch of date-based, no-bake energy bites.

This fancy looking salad green, sometimes called "Galactic lettuce" or "Red Fire Lettuce," is filled with fiber and vitamin A, a nutrient that helps form and maintain healthy skin, teeth, and bones.

Eat This!: Add red leaf lettuce into your sandwiches along with some onions and cucumber or make it your go-to green next time you make a mason jar salad. 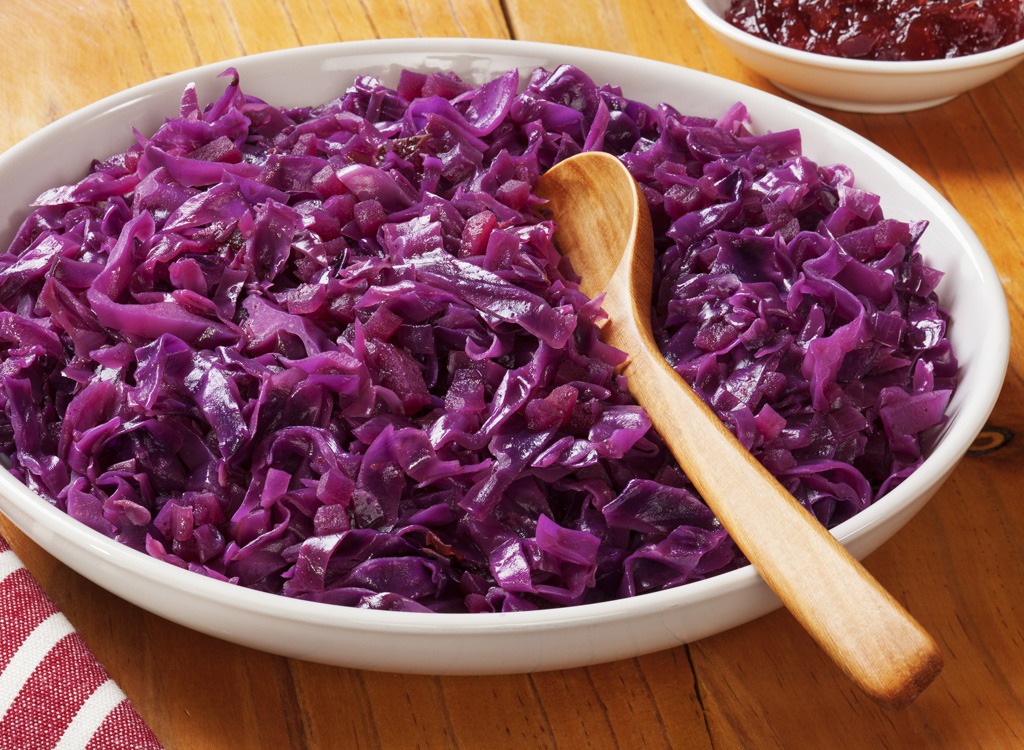 When you eat it raw, red cabbage has an ORAC Score 2,496, which definitely isn't too shabby. However, by simply boiling it up, a process that helps extract the health-protective nutrients from the plant's cells, its score skyrockets to 3,145.

Eat This!: If you're not a huge fan of cabbage but want to give it another shot to reap the health benefits, add some bacon to the mix. Because, well, everything tastes better with bacon! Amiright?! To make it, simply combine 1.5 pounds of cabbage with ¼ pound of chopped, thick bacon and 5 tablespoons of apple cider vinegar in a cup of water. Allow the mixture to come to a boil over medium-high heat. Then, reduce to low heat and let simmer for about 2 hours or until tender. In a separate bowl, whisk together a tablespoon of flour and 1/2 cup of water, and then gradually add to the cabbage when it's nearly time to take it off the stove. Let the mixture simmer until it thickens, top with ground pepper and serve.

While figs may be best known for their inclusion in the famous Fig Newton cookies, you'll have to eat the fruit raw—and without the coating of sugar and flour—to best reap the health-protective benefits.

Eat This!: Enjoy the candy-like fruit on its own as a quick snack, add figs to a kale, onion, and avocado salad or mix with zoodles, walnuts, goat cheese and a garlic wine sauce for a light take on pasta night. Loving the last idea? We've got plenty more veggie noodle ideas in our story, 21 Mouthwatering Spiralizer Recipes!

One cup of cherries has about 260 milligrams of potassium (nearly that of a small banana), which helps keep blood pressure in check. Cherries also contain good amounts the antioxidants of quercetin and anthocyanin, which help protect against cancer and cardiovascular disease. They also pack a solid hit of fiber which aids digestive health, wards off hunger, and subsequently, aids weight loss.

Eat This!: No need for special instructions here, cherries are best enjoyed plain, or mixed with other fruits in a bowl, during the summer months. If you rather sip your fruit? Purée up a handful of cherries and combine the mixture with ice and sparkling water for a refreshing drink. 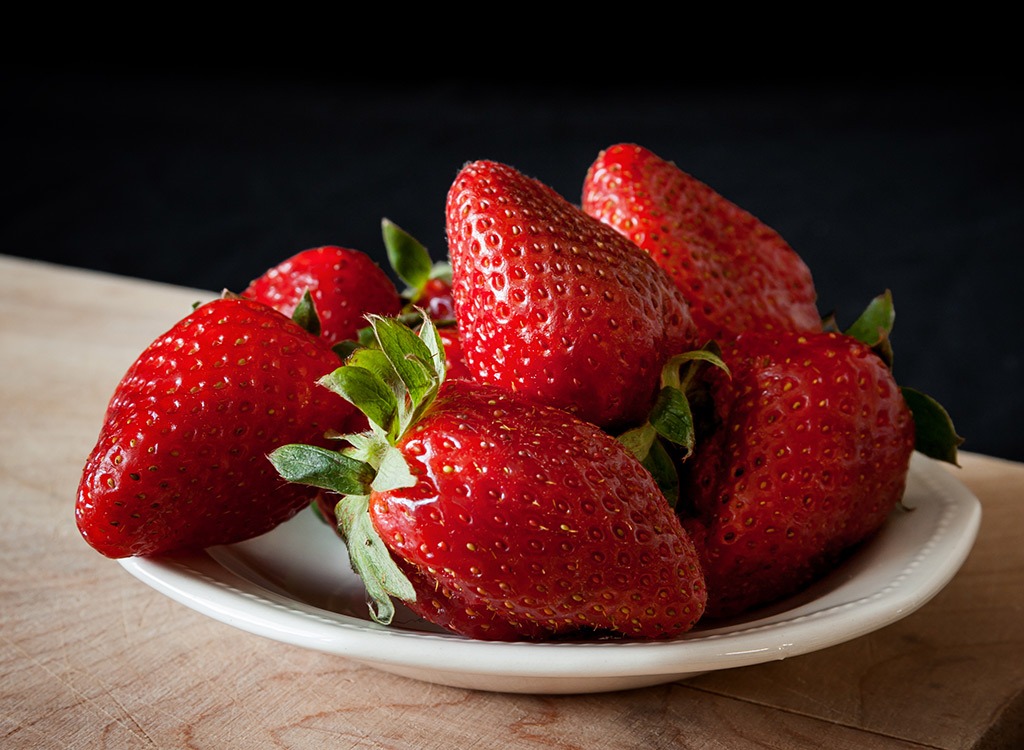 Strawberries are packed with polyphenols, powerful natural chemicals that can help you lose weight—and even stop fat from forming! In a recent Texas Woman's University study, researchers found that feeding mice three daily servings of berries decreased the formation of fat cells by up to 73 percent!

Eat This!: Add the sweet, red berry to cereal, overnight oats or make a spinach, strawberry, grilled chicken and goat cheese salad. They also taste wonderful on their own.

So long as you keep the skin on, red delicious apples are one of the most healthy fruits on the planet, beating out Empire, McIntosh, and Mutsu for top honors. Why do you have to keep the skin on? Because that's where 80 percent of an apple's antioxidants are found, according to one Canadian study. Not to mention, that's where all the fiber is hiding out, too. Aside from its flat belly benefits, fiber has also been shown scrub out arterial walls, lowering cholesterol levels.

Eat This!: Top apples with one of these 36 Top Peanut Butters to reap an ideal mix of carbs, fiber, and protein!

Pomegranate seeds, also known as arils, contain three types of antioxidant polyphenols, including tannins, anthocyanins, and ellagic acid, which all help fight and prevent damage to your body caused by free radicals (molecules that have been closely linked with arthritis, heart disease, cancer, stroke and respiratory diseases.) One pomegranate also provides about 30 mg of vitamin C, which is important for skin and immune health.

Eat This!: Pop arils solo as a snack or sprinkle them onto salads, Greek yogurt, or oats. If you happen to have leftovers, they also make a festive addition to a flute of champagne! Maybe not the "healthiest" suggestion, but hey, YOLO! 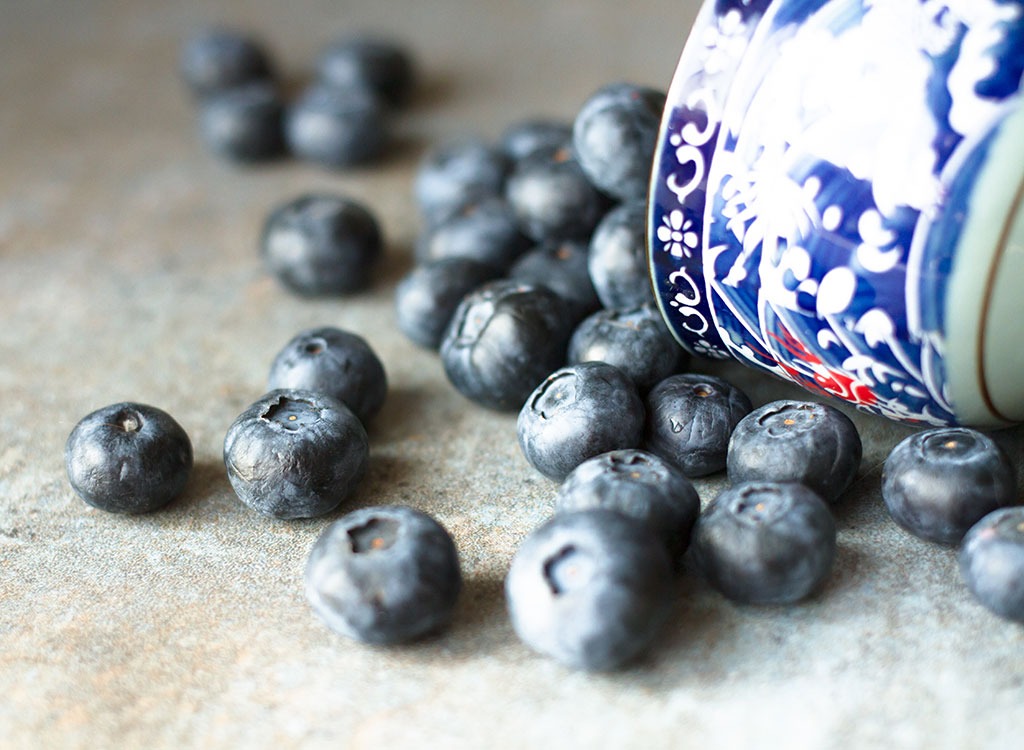 Blueberries: They're small, blue, sweet, and they may just save your life! A Harvard study of 93,600 women revealed that eating blueberries (and strawberries!) could decrease the risk of heart attack by an impressive 34 percent!

Eat This!: Add blueberries to your smoothies or use the fruit—along with a squeeze of lime juice and some diced red pepper, jalapeño, and onion—to make a fruity salsa.

One cup of blackberries packs nearly 8 grams of fiber and nearly fifty percent of the day's vitamin C, a nutrient that can help lower cholesterol levels and boost heart health. But that's not all: Nutritionist, Oz Garcia loves blackberries for their vitamin K content and exceptional phytonutrient power. "This is important for men because it's been shown to help lower risk of prostate cancer," he says. "It's also high in the mineral manganese, which helps support optimal testosterone production." For more healthy foods you should add to your plate, check out these 23 Healthy Foods Celebs Can't Get Enough!

Eat This!: Add the potent berry to your smoothie bowl or fruit salad, use it as a yogurt or whole-grain pancake topper. Not in the mood to cook? Enjoy a bowl of berries with a tablespoon or two of whipped cream.

Think of plums as nature's Jolly Rancher; a low-cal vitamin-packed candy that can help you fit into your skinny jeans. Studies suggest that plums may help ward off metabolic syndrome—a name for a group of risk factors, of which belly fat is a predominant determinant.

Eat This!: Enjoy the tart fruit as an on-the-go snack.

Artichokes may look spiny and scary but they are potent sources of fiber (1 cup = 8 grams), bloat-banishing potassium and antioxidants that knock-out health-damaging free radicals. The bottom line: If you don't already have the knowledge, they're worth learning how to cook so you can add them to your diet.

Eat This!: Once you've steamed the veggie in a pot of boiling water or a slow cooker, you can use the meaty petals and hearts to amp up the fiber content of everything omelets and sandwiches to mac and cheese and pasta. We also have a great recipe for artichoke chicken in our round-up 35 Best-Ever Chicken Recipes for Weight Loss! 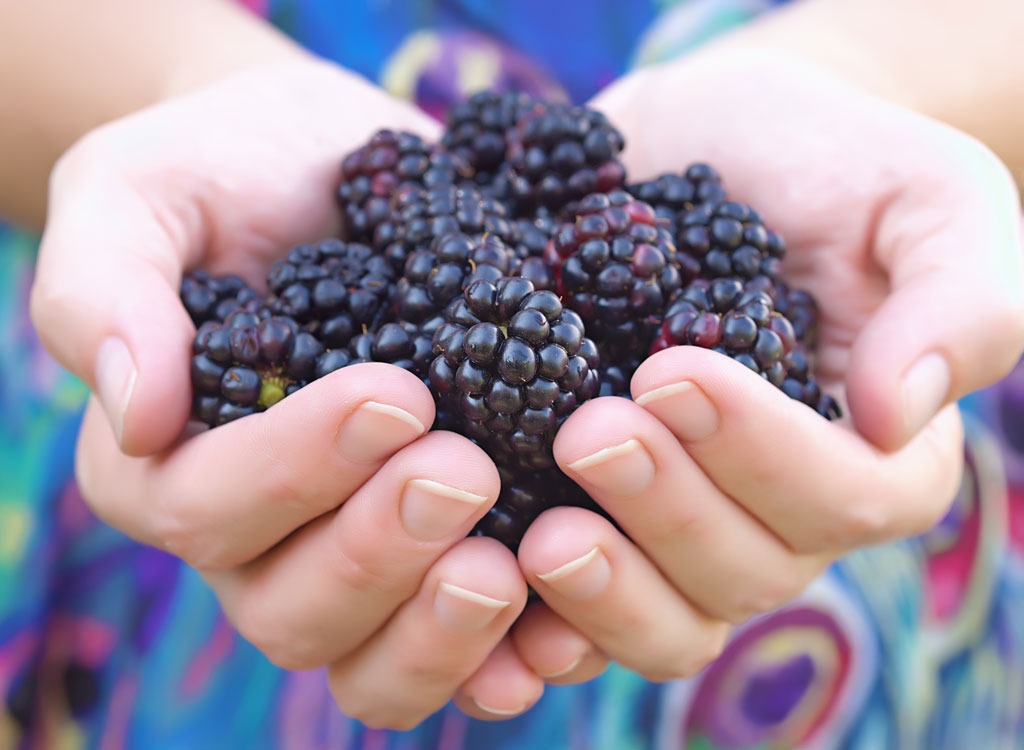 As far as healthy foods that can save your life go, black raspberries make the top of the list. They contain more than two times the antioxidants than any other piece of produce! And according to a recent report in the journal Open Chemistry, black raspberries have three times the antioxidants as red raspberries. They're also a more potent source of secondary metabolites, a type of organic compounds that are beneficial to human health.