6 Bacon Brands That Use The Lowest Quality Ingredients

These store-bought bacons are filled with unnecessary additives that you don't want to eat.

Piled high on cheeseburgers, served with eggs, enjoyed with loaded baked potatoes—bacon just screams flavor. It's one of those foods that tastes great with pretty much anything. However, bacon does not come without its cons.

For starters, mass-produced bacon is often injected with chemical additives, including potassium nitrate and sodium nitrate, which are used as both preservatives and fillers. Also, according to research, bacon has been linked to an increased risk of disease, weight gain, and even male infertility.

That's why it's important to keep an eye out for high-quality bacon when you're grocery shopping. When in doubt, opt for uncured bacon, which is bacon that has not been commercially prepared using salt and sodium nitrites. Uncured bacon is cured using celery (which has its own natural nitrites), sea salt, and other flavorings from herbs and extracts. Although uncured bacon may still contain some nitrates or nitrites, at least they are from naturally occurring sources.

Lastly, it's best to go for bacon that's labeled "organic," which means that the animal was raised humanely, fed 100% organic feed, and was not given antibiotics or hormones. Buying bacon from local butchers or farmer's markets instead of large corporations that mass produce the stuff can also result in purchasing higher quality products.

To help you decide which bacon to pick up the next time you're at the grocery store, here are six bacon brands that use low-quality ingredients. And next, don't miss the 8 Worst Fast Food Burgers to Stay Away From Right Now. 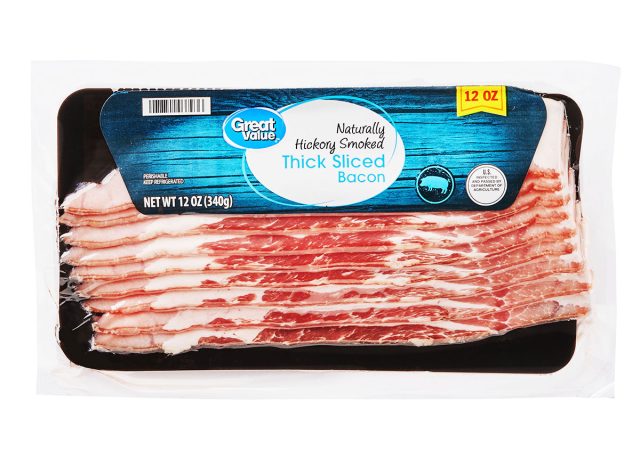 Great Value bacon, which is often sold at stores such as Walmart, is cheaper for a reason—it's not high-quality. One of the first ingredients listed is "water," which can be a clear indicator that you're getting a "pumped" or low-quality product.

This brand's bacon is also packed with additives like sodium erythorbate, sodium nitrite, and sodium phosphate, which may all have negative effects on your health. Studies have discovered that higher levels of sodium phosphate in the body have been linked to vascular damage and accelerated aging.

Oscar Mayer has been promoting its natural cold cuts line, which is made with zero nitrites or nitrates, but its bacon is another story.

Don't let the word "naturally" throw you off. Oscar Mayer's Naturally Hardwood Smoked Bacon is full of unnatural ingredients, including sodium nitrite, an additive you definitely want to watch out for. Sodium nitrite, which is often used to flavor and color meat, has been linked to higher risks of developing pancreatic and colorectal cancers.

This product's packaging also gives zero information about the animals it's sourced from, such as what they were fed and how they were treated.

Hormel's Black Label Bacon may be delicious, but its low-quality ingredients leave much to be desired. It's made with additives sodium erythorbate and sodium nitrite, and it also contains dextrose.

Another name for corn sugar, dextrose is an additive that's commonly used as a sweetener or preservative and is known for its high glycemic index. When eaten in excess, it has the potential to cause weight gain, liver diseases, and diabetes. Those suffering from liver disease and diabetes, or those who have an allergy to corn, should be especially wary of this ingredient and enjoy it only in moderation.

RELATED: 10 Cheese Brands That Use the Lowest Quality Ingredients

Kunzler's Black Forest Sliced Bacon has ingredients in it that seem not only unnecessary but also unhealthy: additives such as gelatin, corn starch, and caramel coloring. Corn starch, which is often used as a thickening agent, is known for being high in calories and carbs and low in vitamins and nutrients.6254a4d1642c605c54bf1cab17d50f1e

Other unhealthy ingredients, such as sodium phosphate, sodium erythorbate, and sodium nitrite, are also listed.

Chemical additives, such as sodium erythorbate and sodium nitrite, make another appearance in this Smithfield bacon option. Water, sugar, and salt also take the first, second, and third ingredient spots, which means that you may want to steer clear.

Instead, choose uncured bacon that's free of any additives and has fewer ingredients listed on the label.

RELATED: Ugly Side Effects of Eating Too Much Bacon

Don't be fooled, McCormick Bac'n Bits, the tasty topping that usually appears on baked potatoes, actually contains zero bacon in it. In reality, it's made of texturized soy flour, canola oil, and artificial flavoring. It also contains disodium guanylate, which is a common food additive that's used to enhance flavor. Although this additive is safe in moderation, people who suffer from gout or uric acid kidney stones should especially avoid it because it can cause elevated levels of uric acid in the body.

If you're craving bacon bits, it's healthier to just make your own at home using organic bacon that's low in sodium and contains no preservatives or additives.