Out of 89 Progresso Soups, These 10 Are the Healthiest

The next time you stop at the grocery store to stock up your pantry with soup for the colder months, keep this guide handy.

Let's be honest: soup is a great way to fill up without filling out. Soups are traditionally low in calories and high in satiety factors. While the biggest benefits come when you make soup at home with whole ingredients and little to no preservatives or artificial ingredients, eating a homemade broth every week isn't exactly realistic. So when you're in a pinch, it's worth it to keep canned soup—like Progresso soup—stocked in your pantry.

Canned soup saves you time and effort, and considering that Progresso is one of the most popular and readily-available brands on the market, you're probably well aware the brand offers nearly a hundred different varieties.

But how good or bad are Progresso soup flavors for you, anyway? Is buying them a surefire way to sabotage your diet, or simply a convenient way to snag some protein and fiber?

We put together a guide of how to buy the best canned Progresso soup flavors, and how some of your Progresso favorites rank in terms of nutrition content.

What are the benefits of eating canned soups?

The most obvious answer to why it's worth keeping canned soup in your pantry? Cost and convenience.

If having a few cans of Progresso soup at home makes it easier for you to avoid hitting the nearest fast food drive-thru, it's certainly not the worst choice you could make for a weight-loss dinner. "I love homemade soups, but I realize that it isn't entirely reasonable for everyone to have that option all the time," says Cynthia Thurlow, a nurse practitioner specializing in nutrition.

Thurlow says canned soup can be a nice and easy way to have a meal available in just a few minutes, but you have to be careful about the ingredients. As long as you pick the best soups that are low in sodium, have the right balance of protein, fiber, and calories, and contain whole food ingredients, this pantry staple can be a good addition to a healthy diet.

How to shop for Progresso soups

Arm yourself with the knowledge of how to choose the best soup flavors within the Progresso brand with the help of these dietitian tips:

If Progresso soup is a regular item on your weekly shopping list, consider buying one of these 10 varieties—they are some of the healthier choices within the brand's massive lineup. 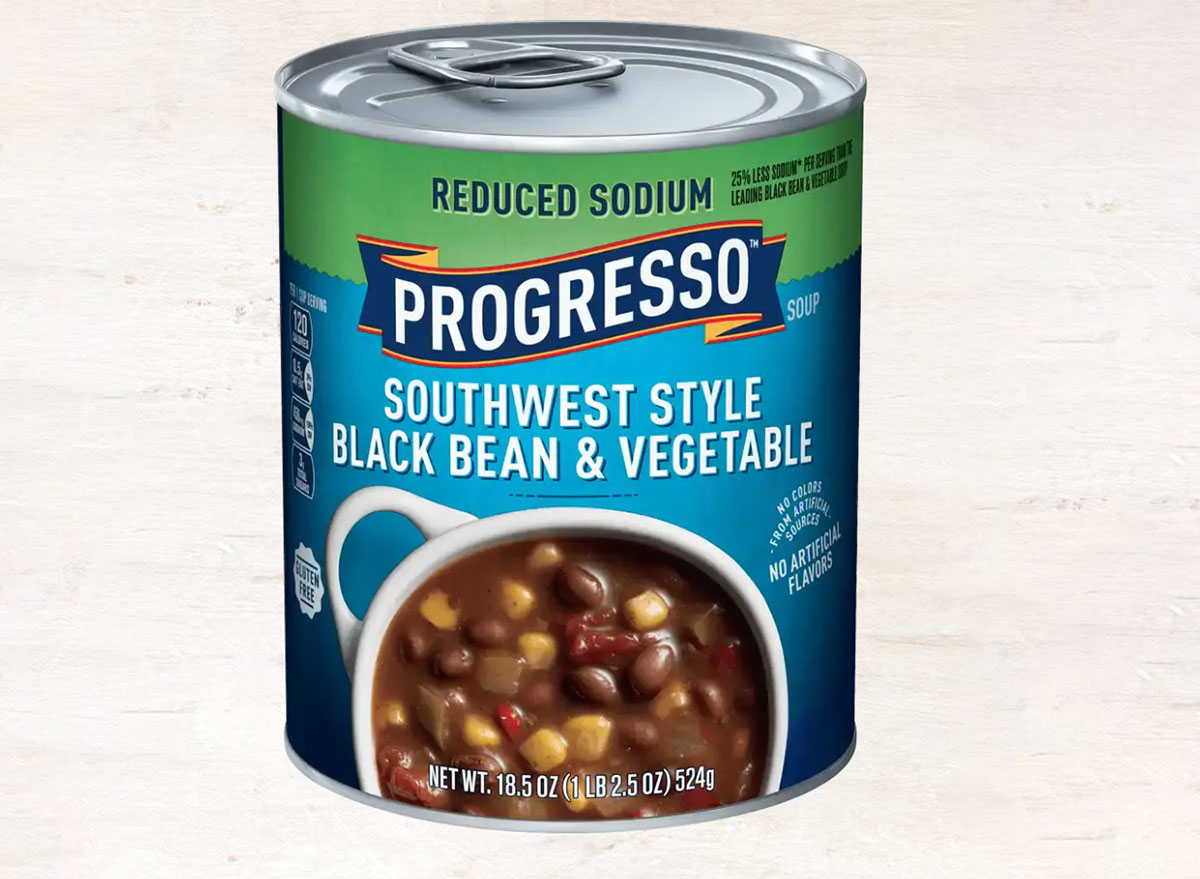 Thurlow gives this soup two thumbs up because it contains recognizable, wholesome, and nutrient-dense ingredients like black beans, tomatoes, and bell peppers. Because it's part of Progresso's reduced-sodium line, it has 450 milligrams per one-cup serving. (That is way less than the majority of their traditional soups.) 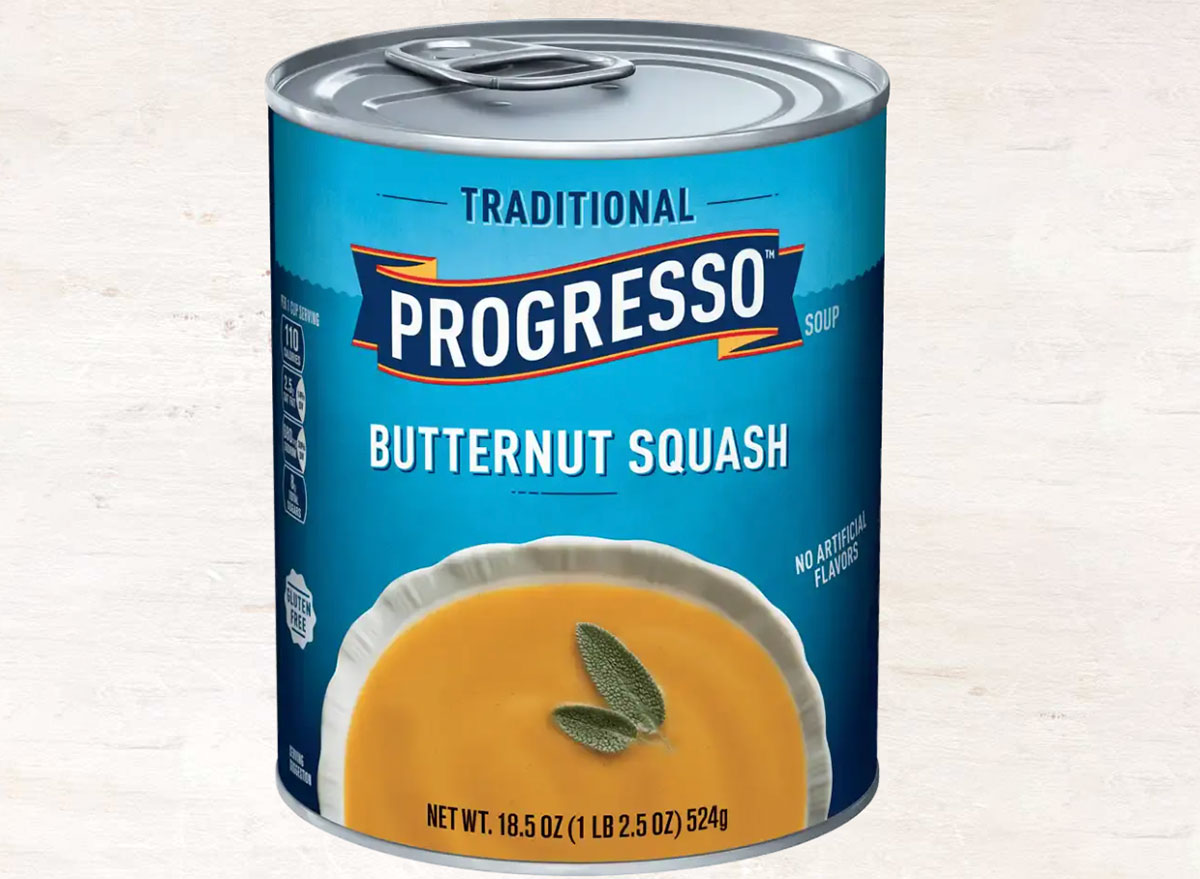 This soup has one of the shortest nutrition labels out of all the Progresso varieties and only three main ingredients—butternut squash, carrot puree, and cream. Thurlow appreciates that it focuses primarily on whole food ingredients and doesn't contain any soy. 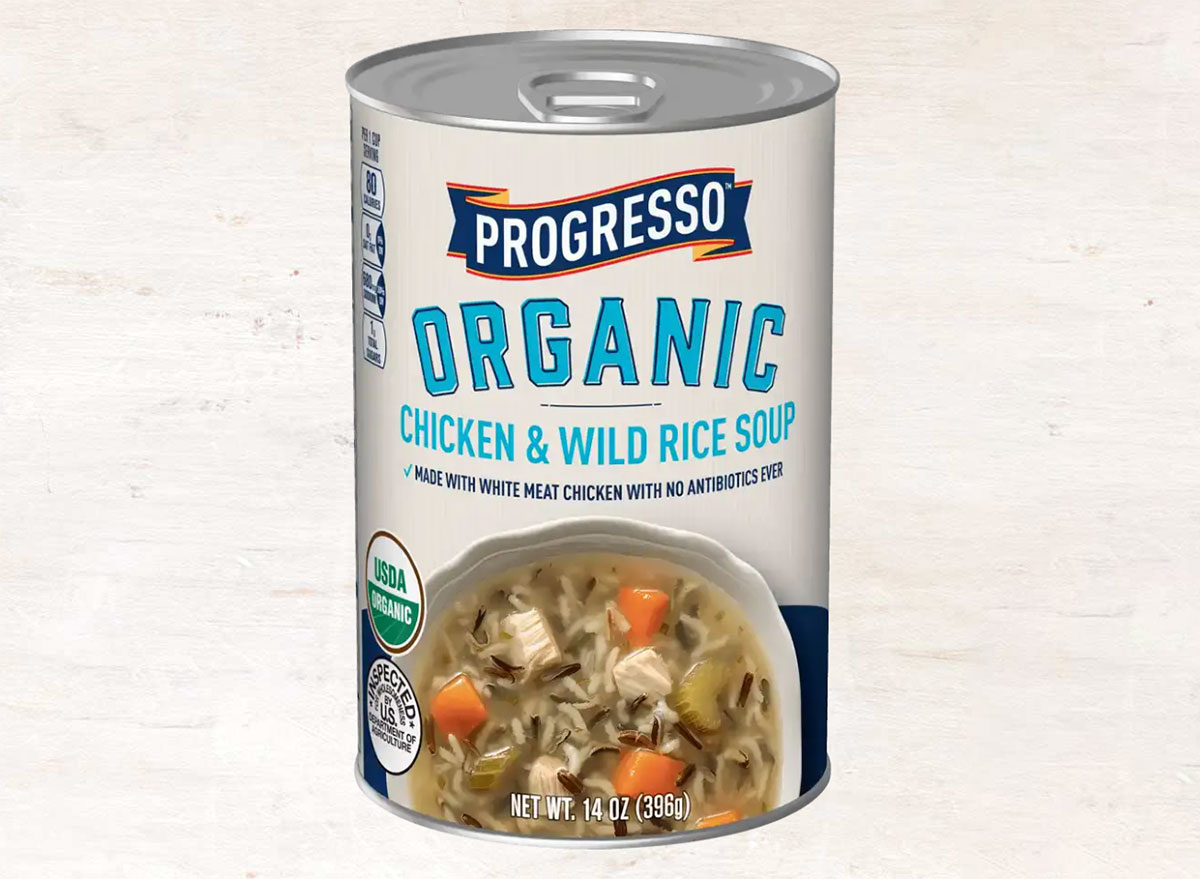 The organic version of this classic cold-weather favorite is soy-free and loaded with carrots, celery, and protein-rich white meat chicken. One cup has only 80 calories and one and a half grams of fat (none of which is saturated). Though the sodium is high—surprise, surprise—this soup has an otherwise-decent nutritional profile. 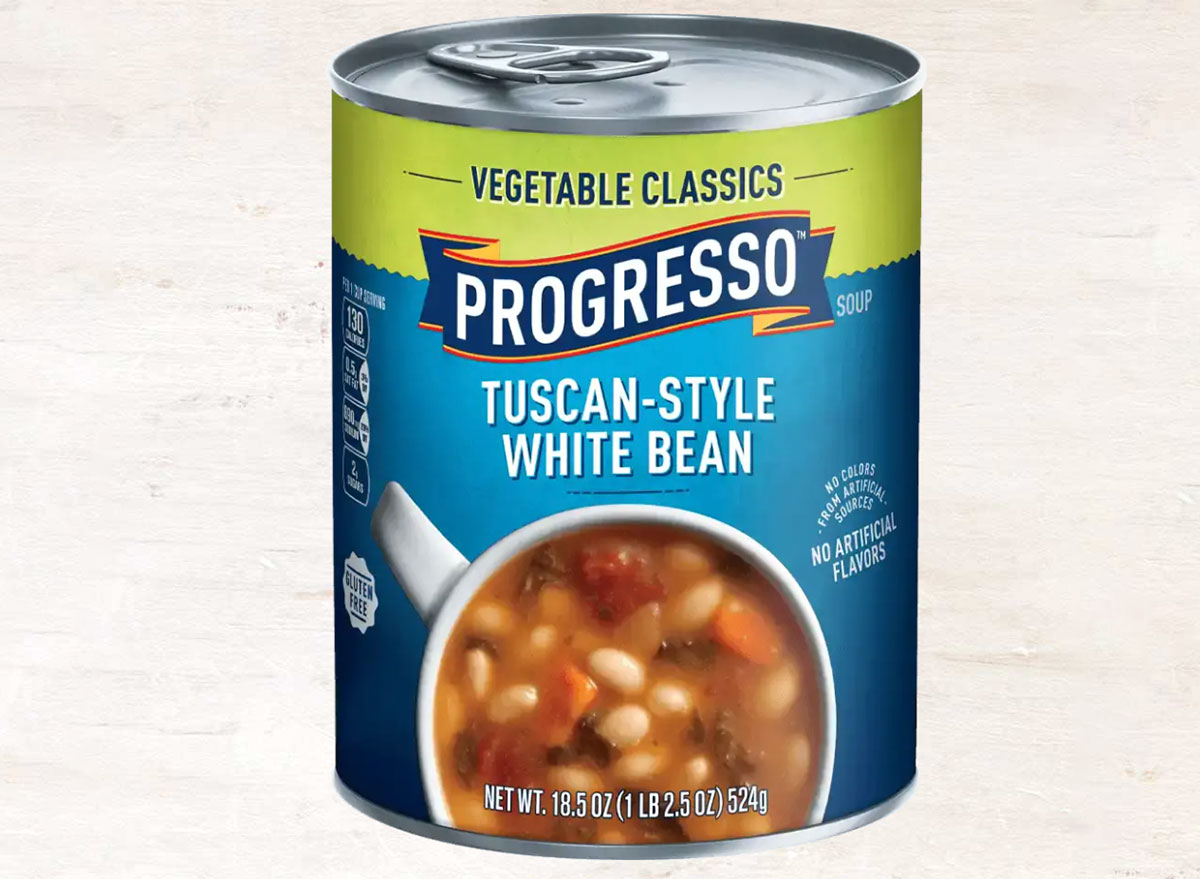 "Soups with veggies are always my top choice because it's an effortless way to increase the produce in your diet," says registered dietitian Lauren Harris-Pincus, founder of NutritionStarringYOU.com and author of The Protein-Packed Breakfast Club.

She adds that one can of this white bean soup contains a ton of fiber (22 grams!), almost a whole day's worth, plus it's a good source of iron, calcium, and vitamin A. 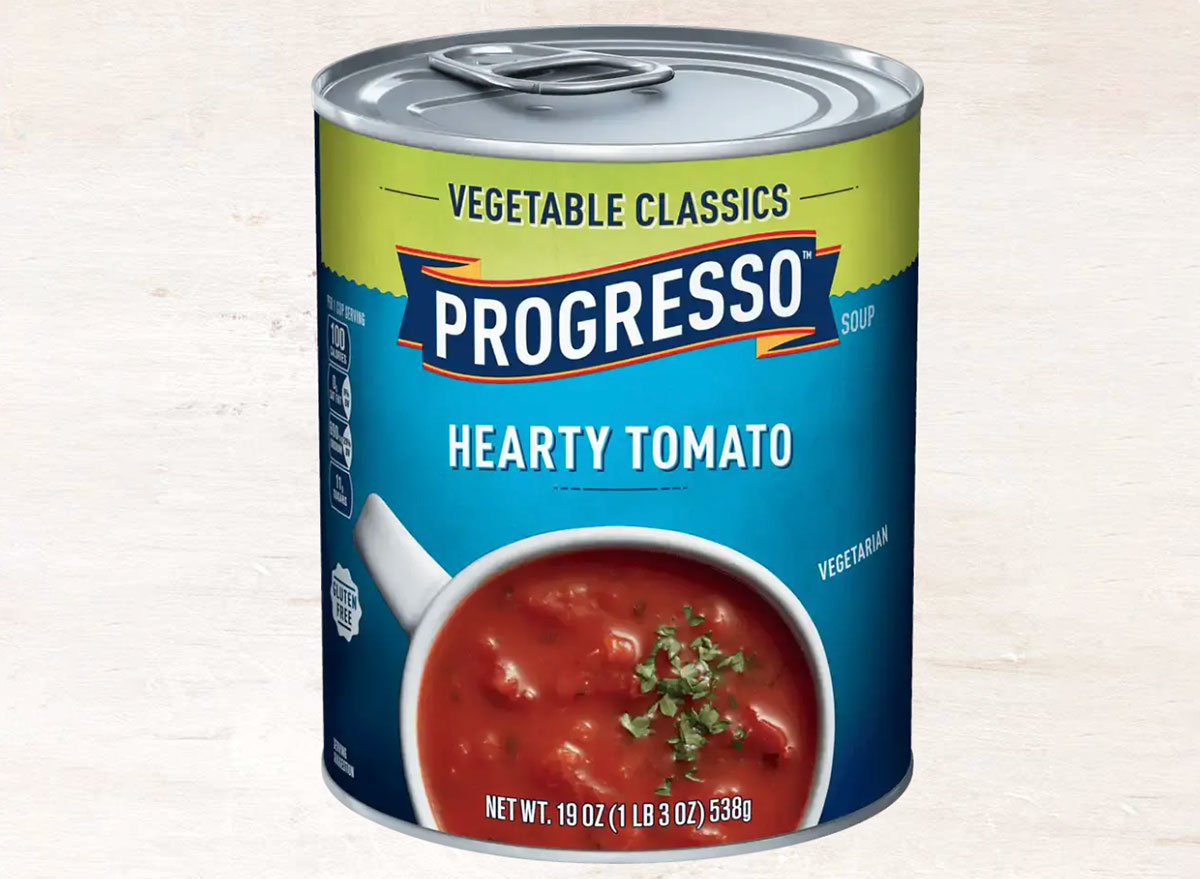 Contained within a one-cup serving of Progresso's hearty tomato soup is half a cup of vegetables and almost zero fat. It's not the most nutritionally-dense soup in their lineup per the nutritionist's standards, but if you stick to the serving size and pair it with a protein- or fiber-rich side (like grilled chicken over leafy greens), you could manage to put a complete meal together. 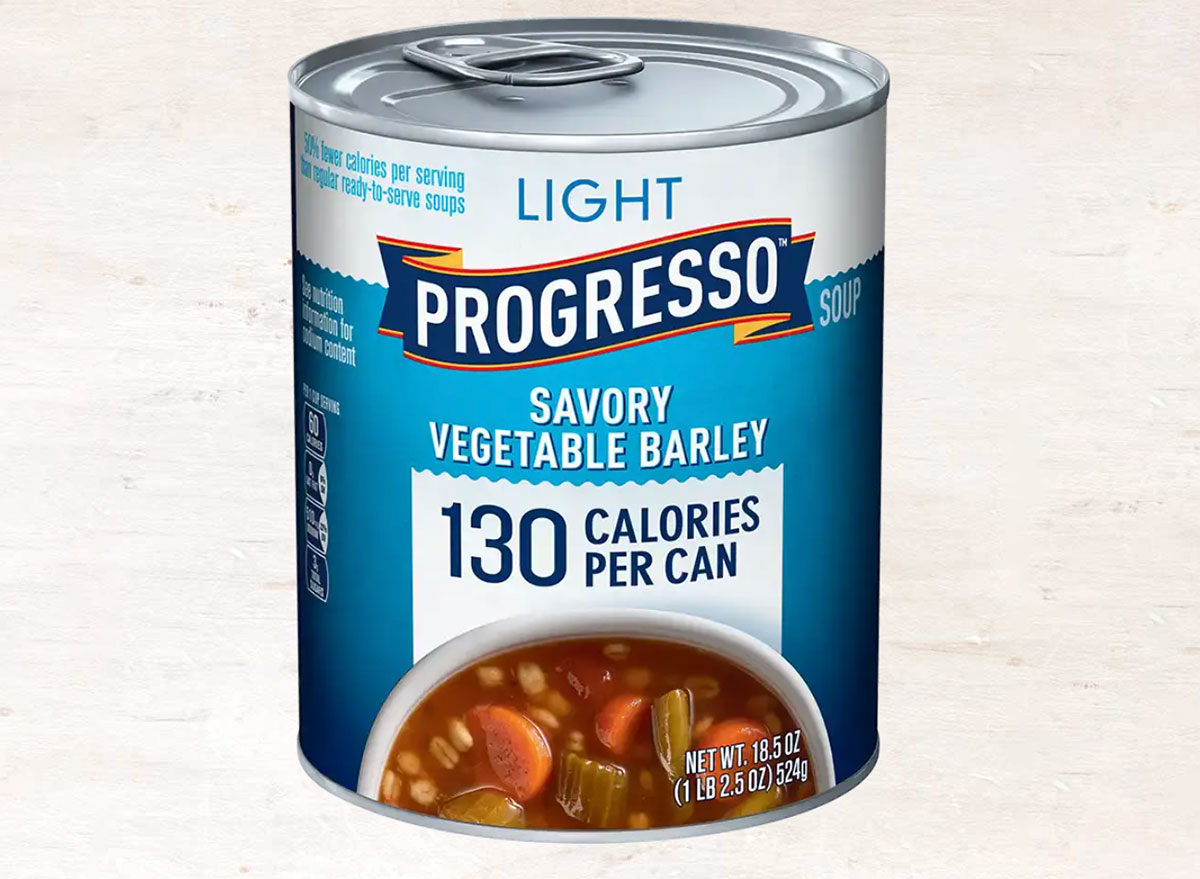 Boules points to the vegetable barley soup as a good source of both protein and fiber, though she does note that one cup of this soup isn't exactly a balanced meal. Because it's low in calories and fat, you may want to pair it with a lean piece of protein or a heart-healthy fat source, like half an avocado, to round it out. 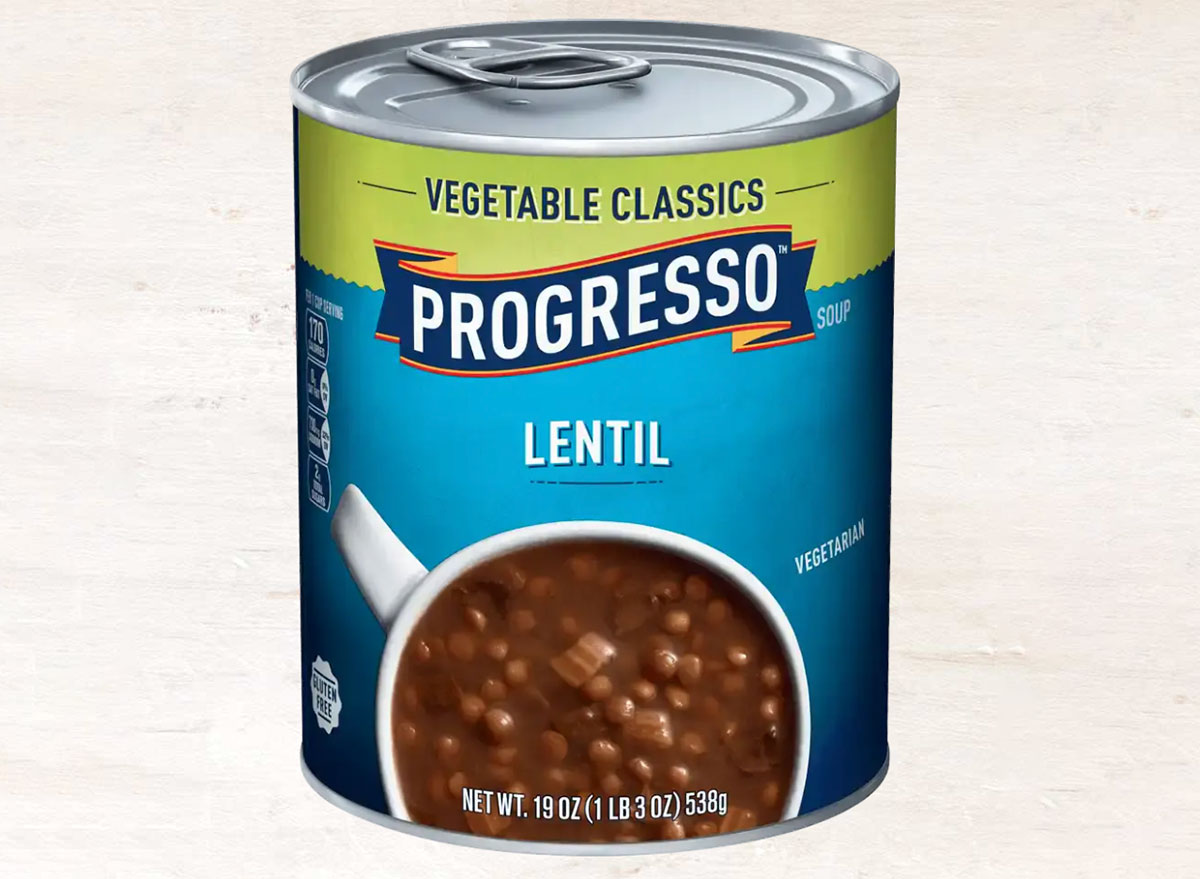 Lentils are kind of a superfood, high in protein, fiber, and folate. Though this soup does contain soybean oil, Boules recommends it for everything else it includes—namely whole food ingredients like lentils, celery, and spinach. Like the butternut squash soup, the ingredient list here is small (which works in your favor, since that means it doesn't have a ton of fillers or artificial flavors). 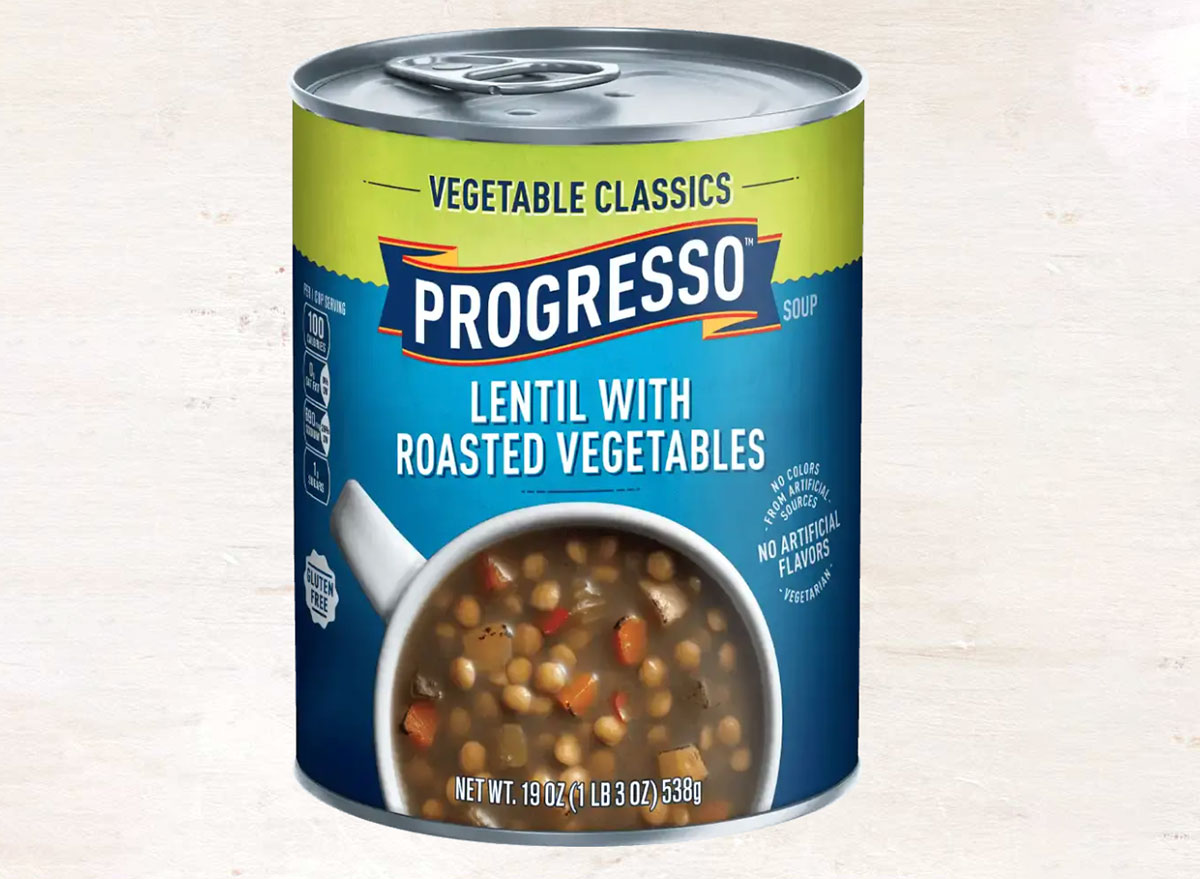 If you want a little extra fiber and flavor with your lentil soup, one can of the variety containing roasted vegetables is packed with 12 grams of plant-based protein and eight grams of fiber, says Harris-Pincus. That gets you one-third of the way toward the total amount of fiber (25 grams) you need every day if you're female. 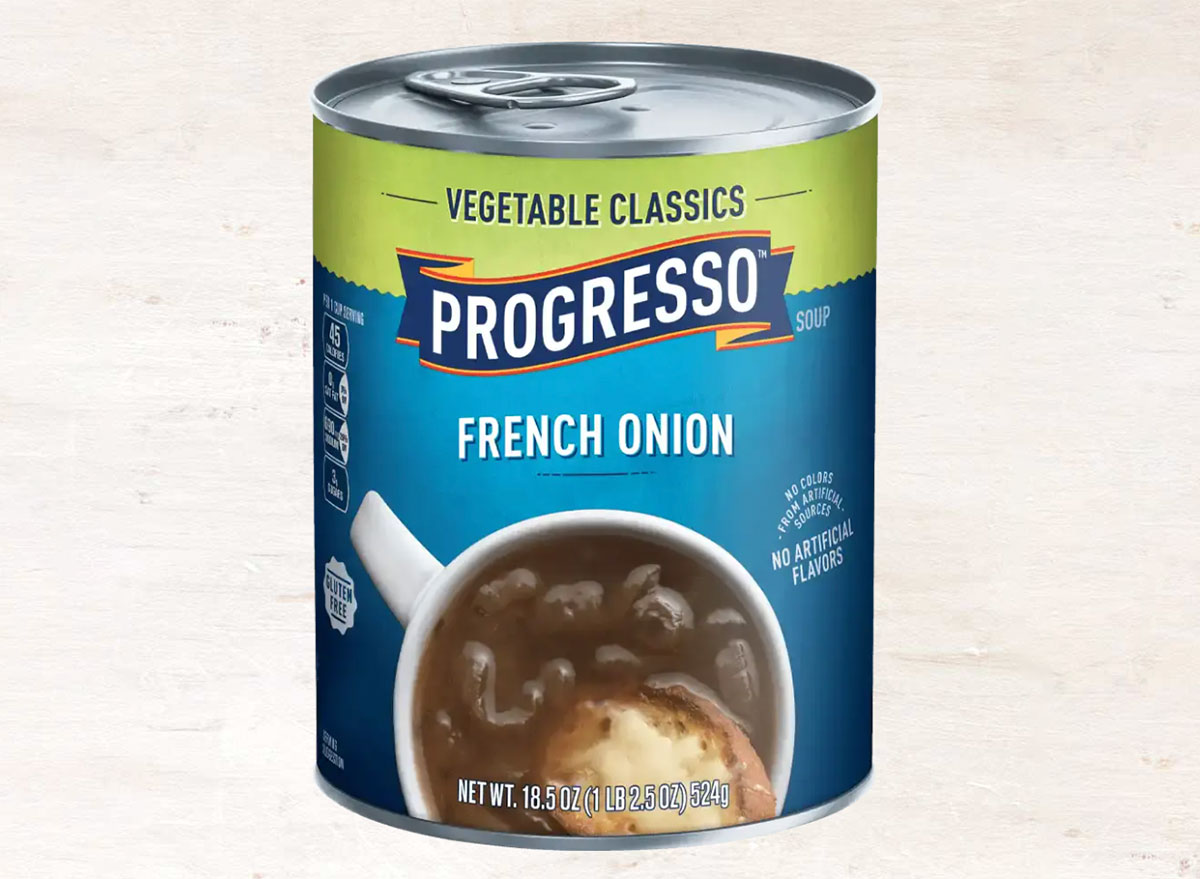 With mainly beef broth, water, and onions, this isn't the most nutritionally-dense option in the Progresso lineup. That being said, it's also super low in calories, fat, and carbs. Plus, onions are a surprisingly beneficial food: they contain vitamin C, fiber, folic acid, and iron, as well as plant-based antioxidants. 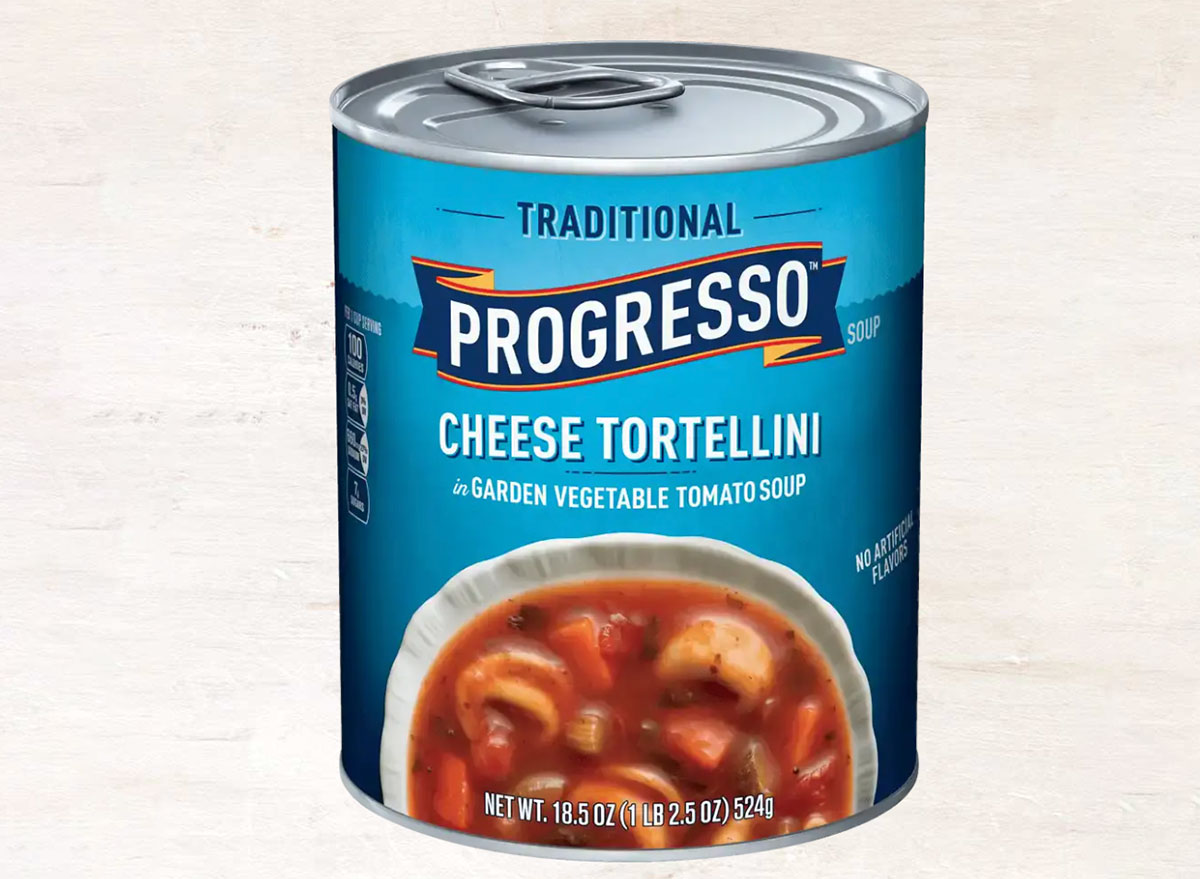 Pasta, you scoff? It's probably surprising to see a canned soup with pasta on our "healthiest" list, but check out the ingredients. This Progresso soup meets many of the nutritionist-approved guidelines. It's soy-free and packed with fiber-heavy tomatoes, zucchini, carrots, and onions. And, for a soup containing tortellini, it's actually on the lower side of calories, fat, and sodium. You might not want it in your weekly rotation, but it won't destroy your diet goals to enjoy it sometimes.

The Progresso soup flavors you should skip

Most canned soups, even the "healthy" ones, come with the caveat of being high in sodium and other artificial ingredients. But some of the Progresso flavors are especially bad for you. Skip these three the next time you're weighing your options. 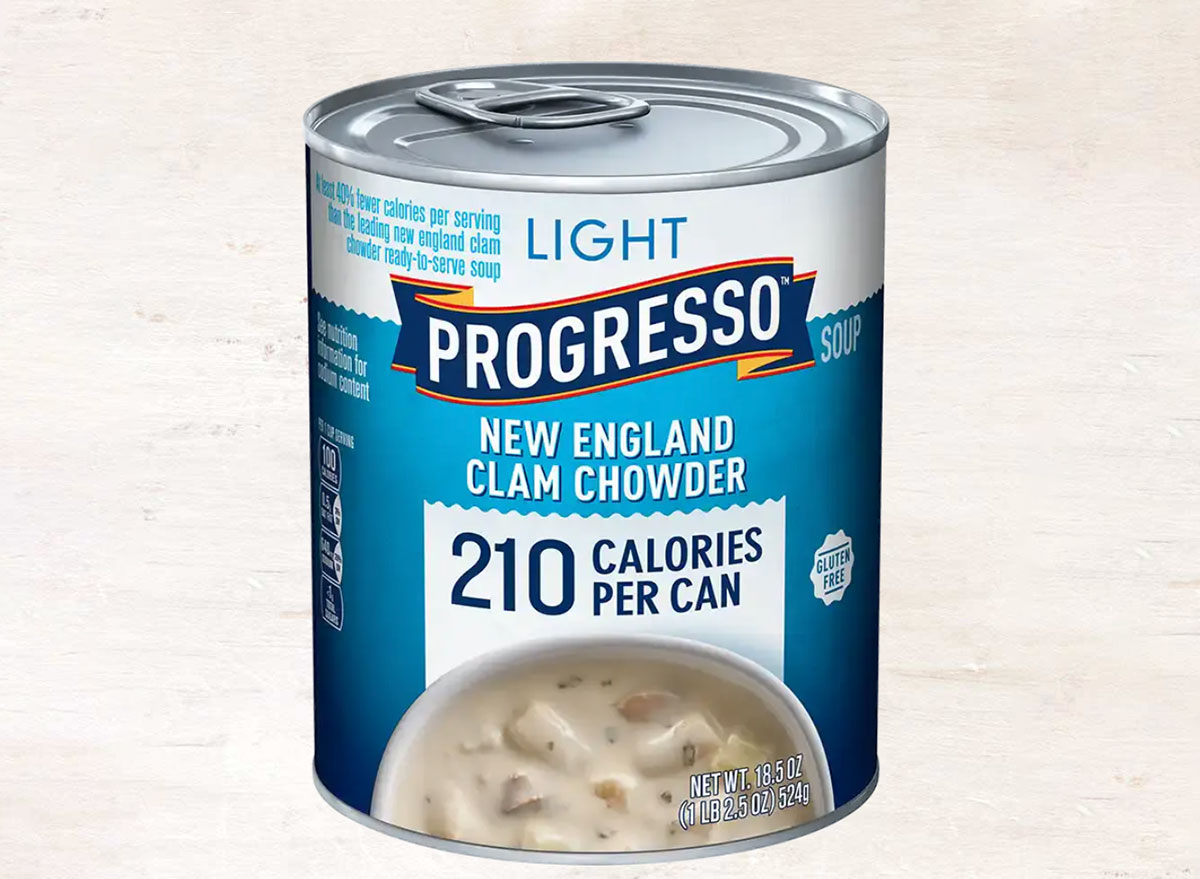 Thurlow flags this clam chowder for having both kinds of soy (soybean oil and soy protein isolate), ingredients that are highly processed and often cause inflammation. Combined with its other ingredients, like clams and dried potatoes, there's not enough nutritional benefit here to bother. 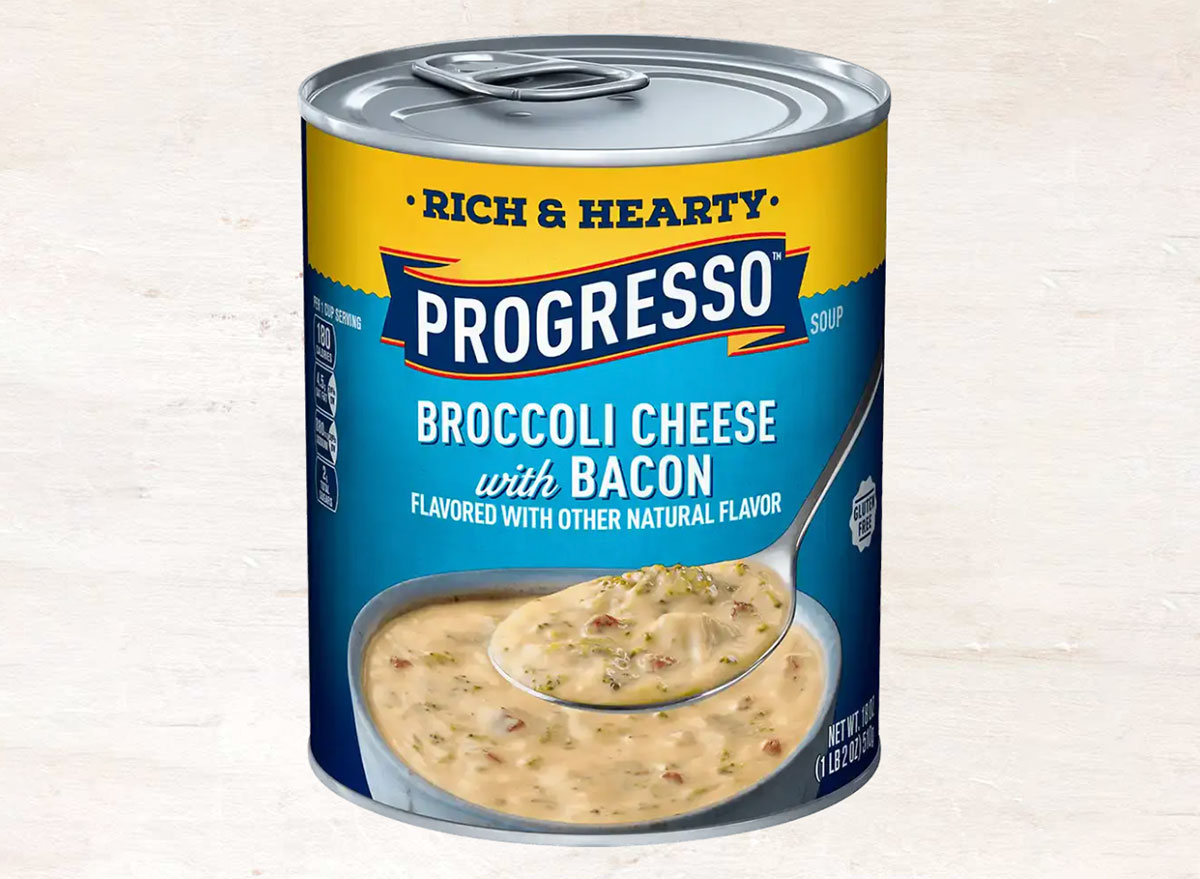 Harris-Pincus says that while most canned soups have too much sodium, some are just way over the top. And that's especially bad if they don't contain any veggies, beans, or whole grains to add fiber. Unfortunately, this soup falls squarely into that category.

"Broccoli cheese soup often has a health halo because it contains broccoli; however, this soup has excessive sodium with 1,760 milligrams," says Harris-Pincus. She adds that it also contains a whopping 26 grams of fat and nine grams of saturated fat. 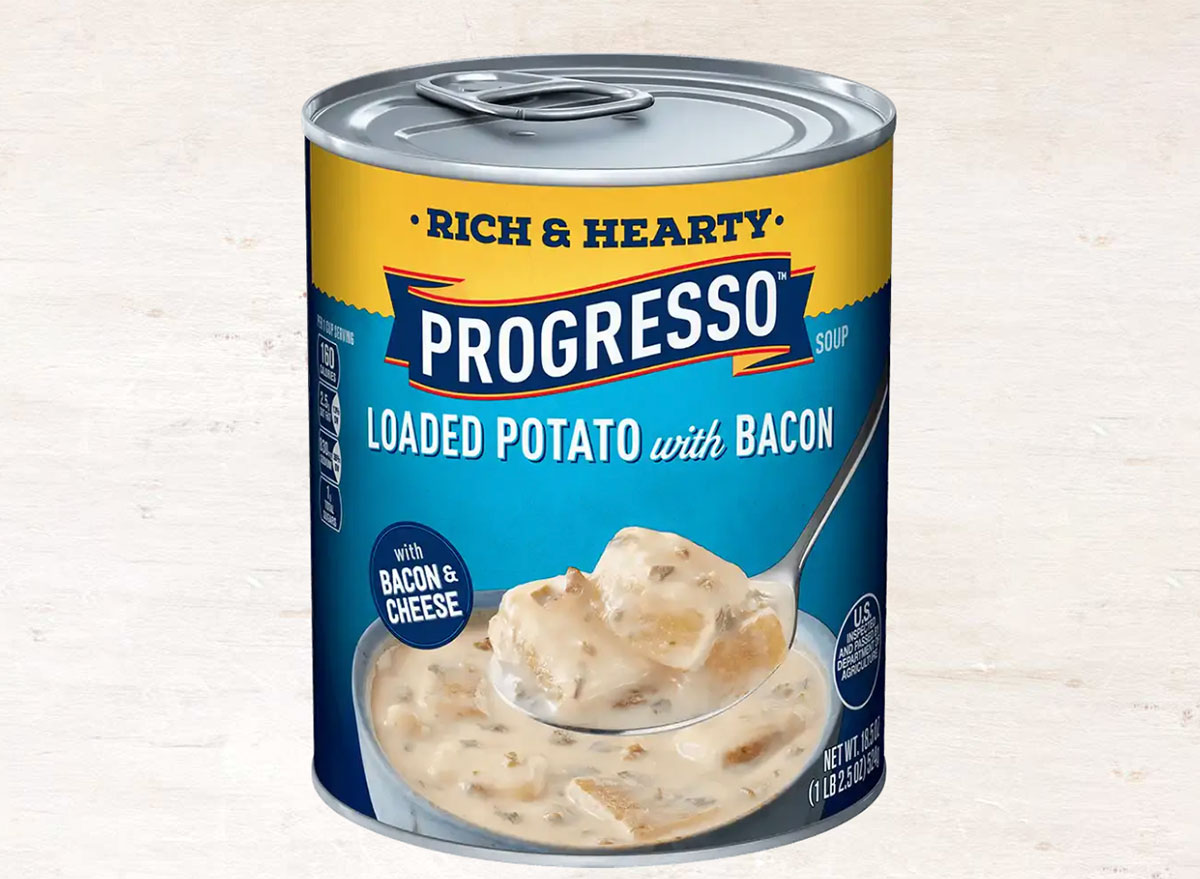 "It's no surprise that this soup would make the unhealthy list," says Harris-Pincus. One can has 1,660 milligrams of sodium. That includes sodium nitrate, a preservative that Harris-Pincus suggests avoiding. Plus, this Progresso soup is totally lacking in nutrition—there are basically zero sources of vitamins and minerals.