We break down the most common types found in your freezer section at the grocery store.

Sprouted bread is certainly the new buzzword to boost the health of your morning toast or lunchtime sandwich. The reason is simple, Chloe Paddison of Cureative Nutrition tells us, "Overall the biggest benefit of consuming sprouted grains is the higher nutrient availability they offer."

Whole grains are higher in nutrition because the grain is left in its 'whole' state. That includes the fiber outside and the germ inside which allows the grain to grow. Paddison says, "Sprouting the grains take it a step further, allowing the germination process to occur before the grain is turned into flour which provides a higher amount of nutrition like B vitamins as well as folate and other very important micronutrients."

Sprouted grains are easier for the body to digest and use, but not all are created equal. What are the best brands to buy? Are there some to avoid? We break down the most common types found in your freezer section at the grocery store. Here they are, ranked from the least nutritious options up to the best choices. While sprouted bread is whole wheat and on the whole, a healthier choice than white bread any day of the week, some brands have some extra ingredients that should inspire some caution. This type of bread has an ingredient listed as DATEM, or Diacetyl Tartaric Acid Esters of Monoglycerides. Used frequently as a dough thickener, it is FDA-approved, but studies in rats have shown some side effects like adrenal gland overgrowth and fibrosis of the heart muscle.

RELATED: The #1 Best Bread to Eat According to a Dietitian 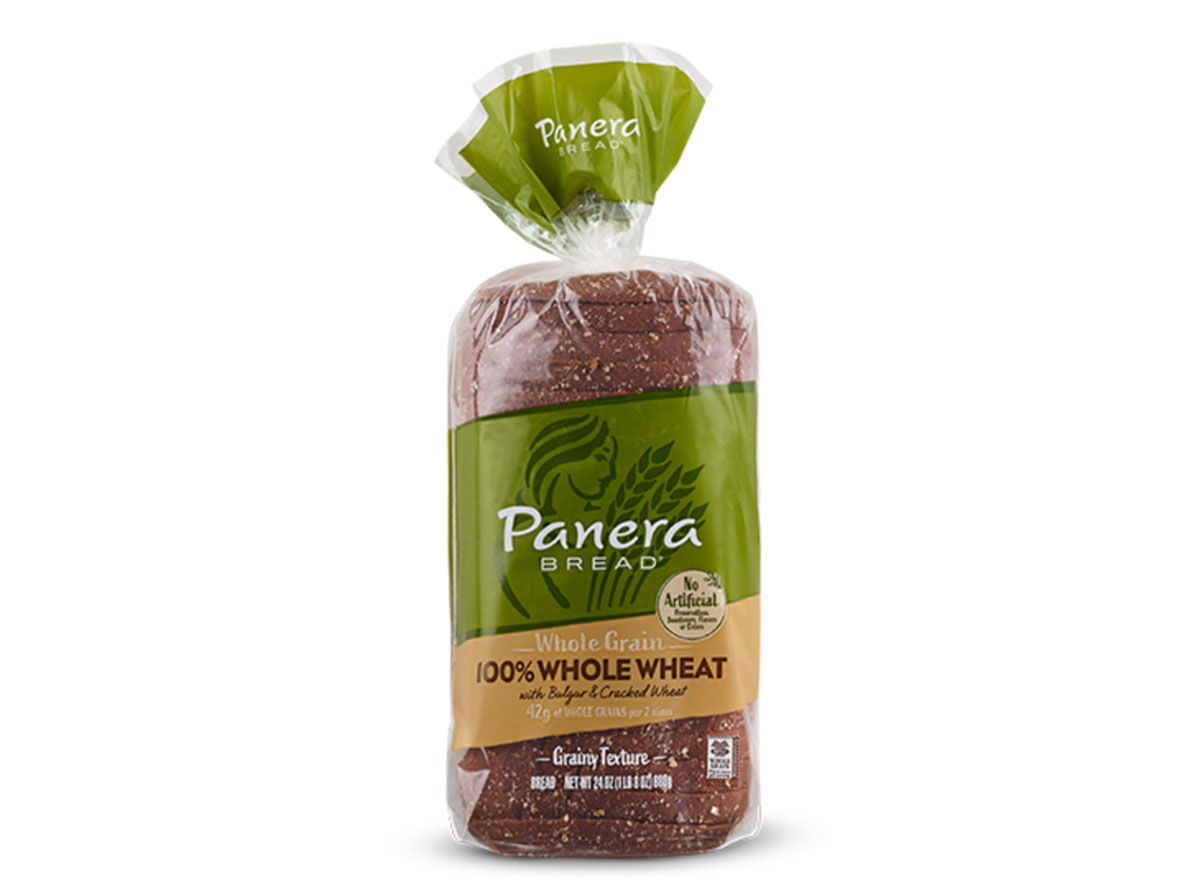 This sprouted bread has added sugars, 1 teaspoon per serving resulting in a slightly higher calorie count, 160 for two slices, and 26 grams of carbs.

RELATED: Why Sprouted Foods Deserve a Place in Your Diet 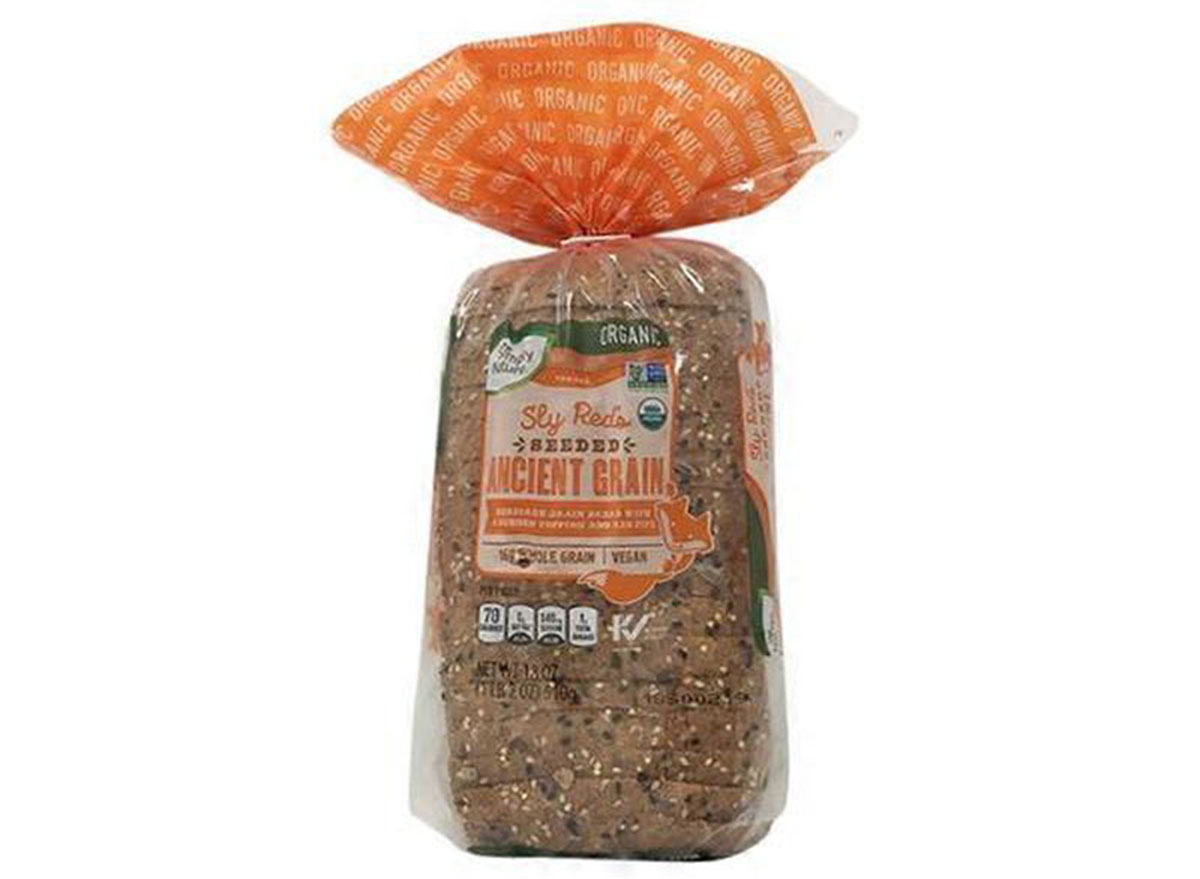 While low in sugar and keto-friendly, this blend of wheat products has no whole grains. While one of the wheat ingredients is organic sprouted red fife wheat, there are some other sprouted bread choices with more fiber. Whole Foods Market's in-store brand has a few concerns. There is 1 teaspoon of added sugar per serving of one slice. That means two teaspoons of sugar for a sandwich as well as 180 calories and 32 carbs. Even with more sweetener, there are still lots of healthy ingredients like flax, millet, and barley. 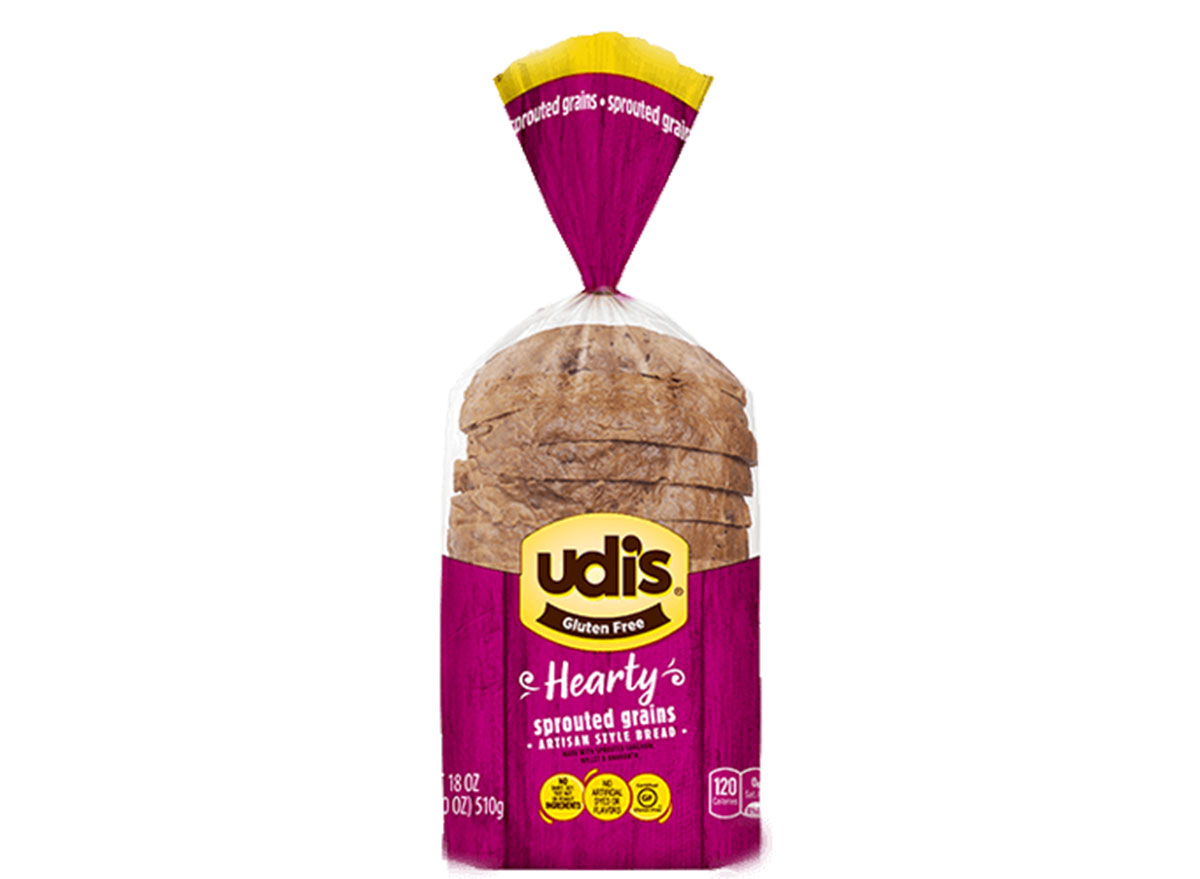 While still a healthy mix of grains, this version of sprouted bread also has xantham gum, which, if taken in large amounts, can cause intestinal distress. It also has two grams of added sugar per slice for a higher glycemic effect. Two slices of this bread will also set you back 240 calories, 34 grams of carbs, and 9 grams of fat, without any added toppings!

RELATED: The Worst Bagel to Order at Panera 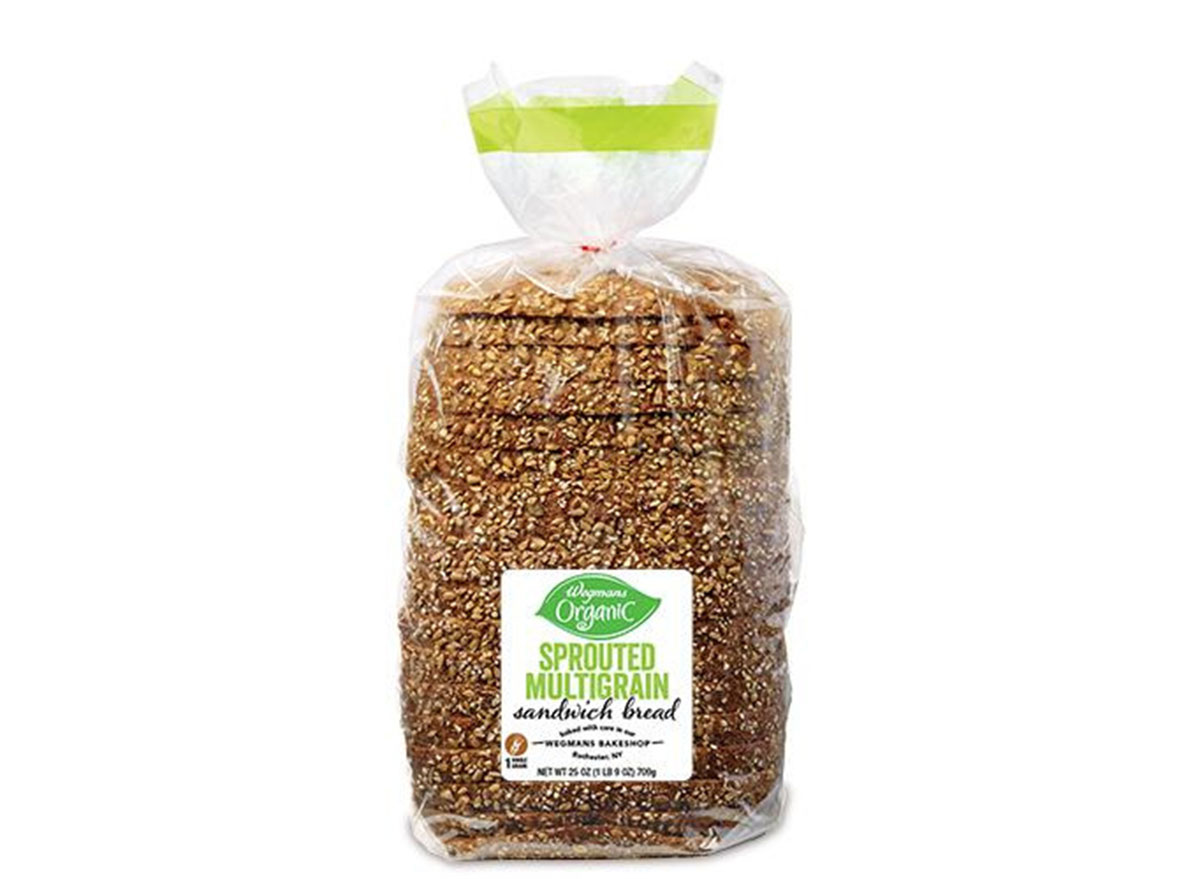 While 'multigrain' used to be the buzzword for healthy bread, it doesn't always have enough fiber. Multigrain doesn't necessarily mean that the product has whole grains. This bread has a blend of grains, but not all are whole grains. Keep an eye out for the phrase '100% whole grain' to get the healthiest bread. This product has a little more sugar, which includes honey and raisin juice, and a little less fiber than other choices. They use a blend of gluten-free flours along with a sprouted grain blend, so the whole grains are a little less present. 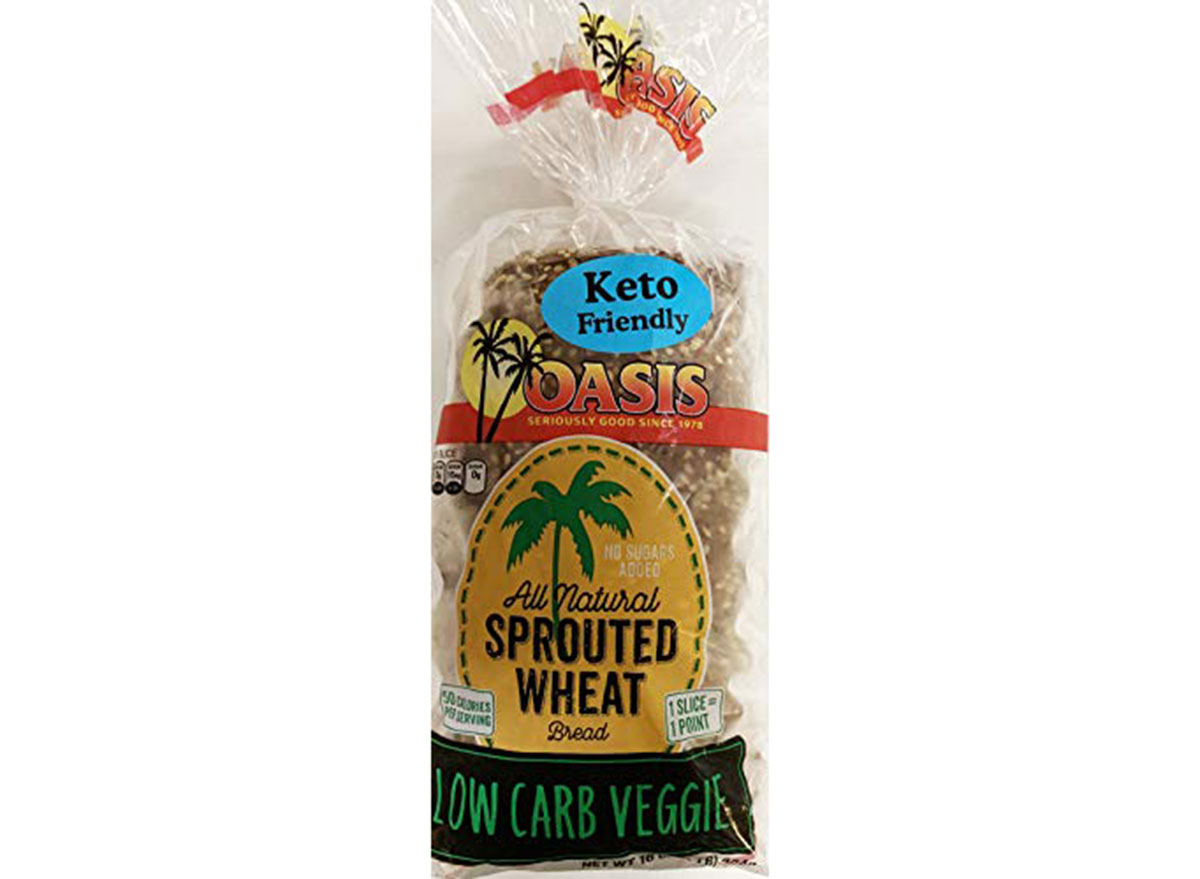 This bread is super low in calories – just 50 a slice. It is also low, per serving, in fiber with just 1 gram. It does only have 7 grams of total carbohydrates, so a full sandwich, instead of the open-faced version, may fit into your diet plan.

RELATED: Major Effects of Eating a Sandwich Each Day This bread has lower sugar and the added benefit of spelt, which is a great source of B vitamins, manganese, and copper. It's also high in protein with 3 grams per serving. The company notes that the texture of the bread remains light even though it has ancient whole grains. Reviewers rave about the taste and texture. There are so many healthy ingredients found in this low-calorie bread — chia, flax, pumpkin and sunflower seeds, plus rolled oats and millet. As an added benefit, Alvarado Street Bakery uses agave syrup to sweeten their bread, which gives the same sweetness for a lower glycemic index.

RELATED: What Happens to Your Body When You Eat Seeds 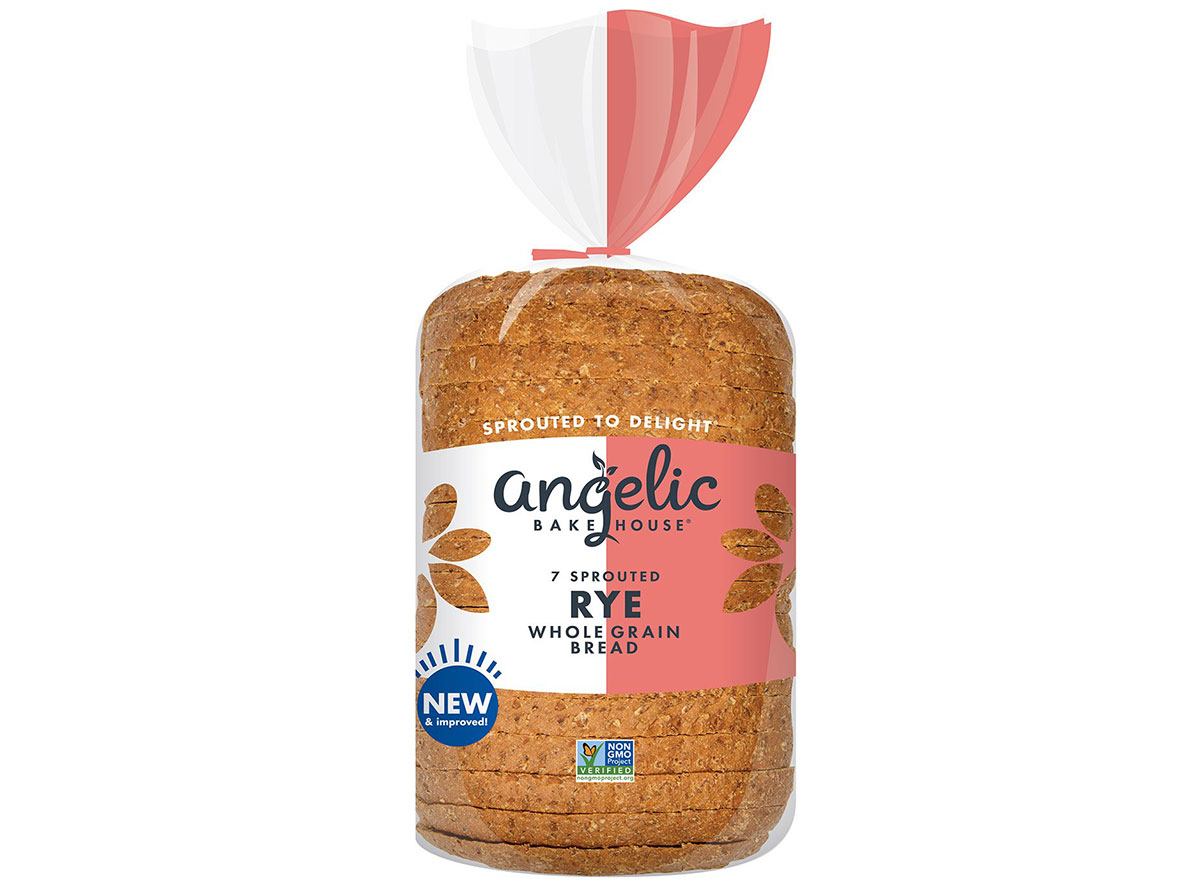 A rye on our list is a good thing! Kick up the health in your Reuben sandwich with this very low sugar, Keto-friendly bread. With only 9 grams of net carbs, it is low in what you don't need. The RDA for fiber clocks in at just 8%, just a little lower than other sprouted types. There is some added sugar to the ingredient list, but this bread clocks in with a whopping 12% of daily fiber. Millet is also in the recipe which is a bonus, taking the place of flours made from corn with less nutrition.

RELATED:  What Is Millet and How Do You Cook It? 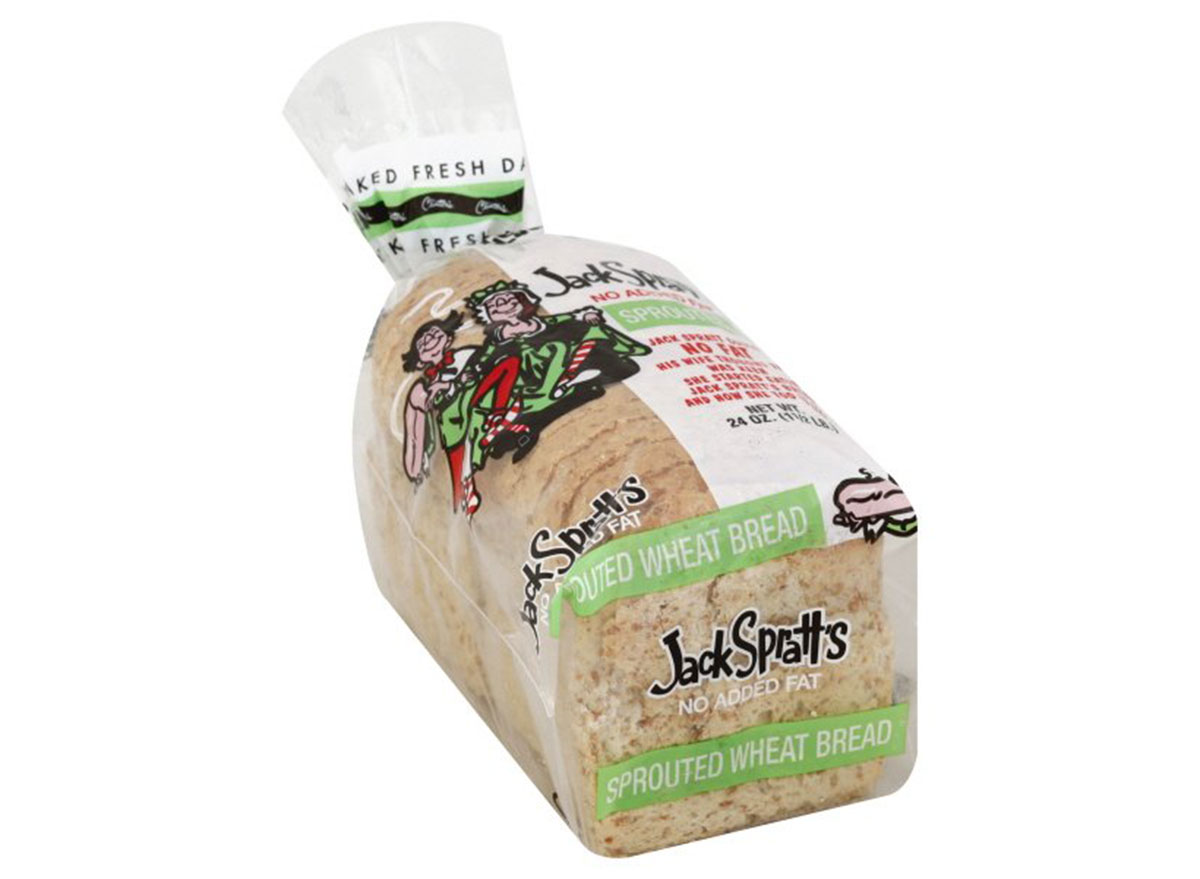 We think this sprouted bread deserves some kudos for its name alone. If you make some sandwiches, you may find that you 'lick the platter clean.' Jack Spratt's is a Utah favorite, with little added sugar and mostly whole grains. This bread has what Food for Life calls the 'trio for health.' The three grains are sprouted millet, sprouted chia, and sprouted quinoa. These grains are anti-inflammatory, full of potassium, calcium, phosphorus, iron, manganese, and copper. There is no flour in the product and the almonds are a great choice for extra nutrition and blood sugar regulation. Considered a Keto option, Silver Hills Bread has only 14 grams of net carbohydrates for two slices. It also has no saturated fat or cholesterol and is topped with oats for a delicious texture.

RELATED: The Best Secrets to Eating Bread Without Gaining Weight 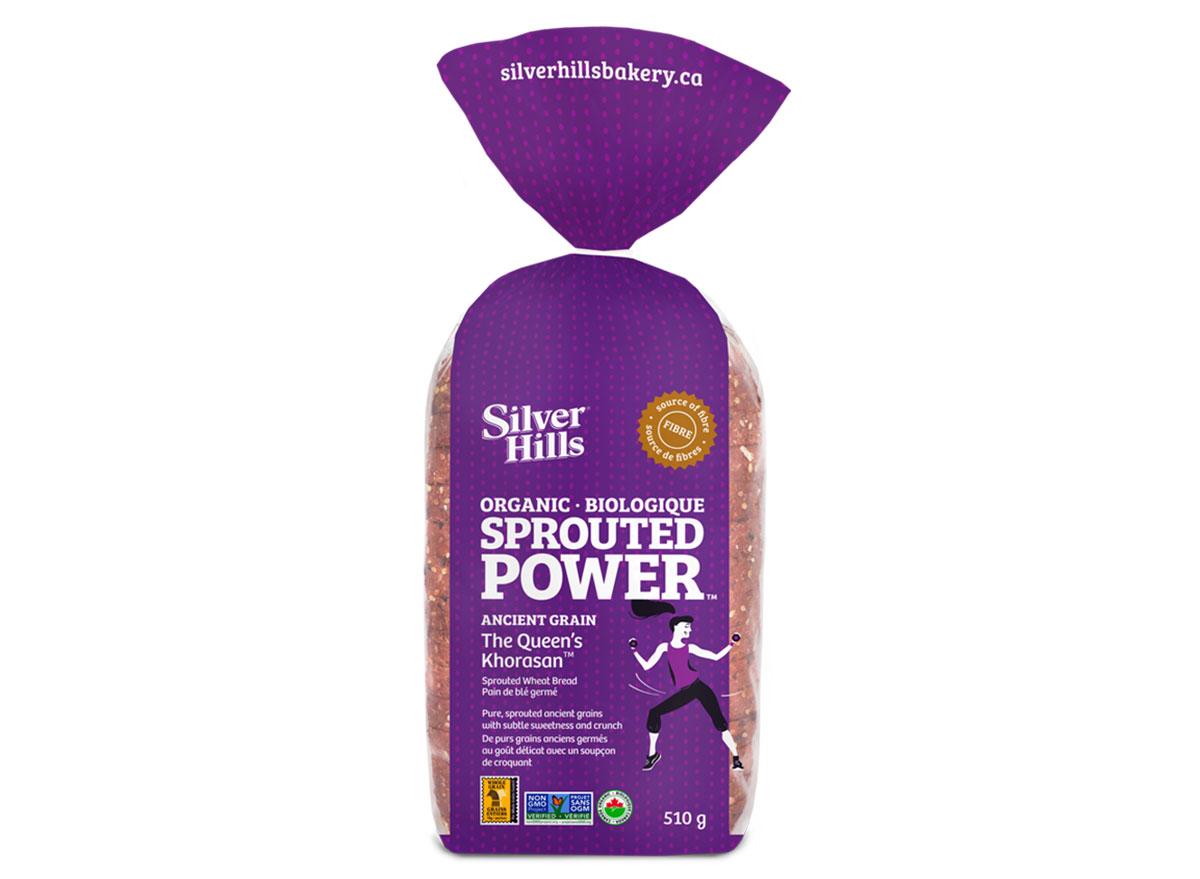 With points for being truly cool, this sprouted bread is made using wheat supposedly found in the ancient tombs of Egyptian pharaohs and queens. Feeling royal through good health doesn't sound so bad. 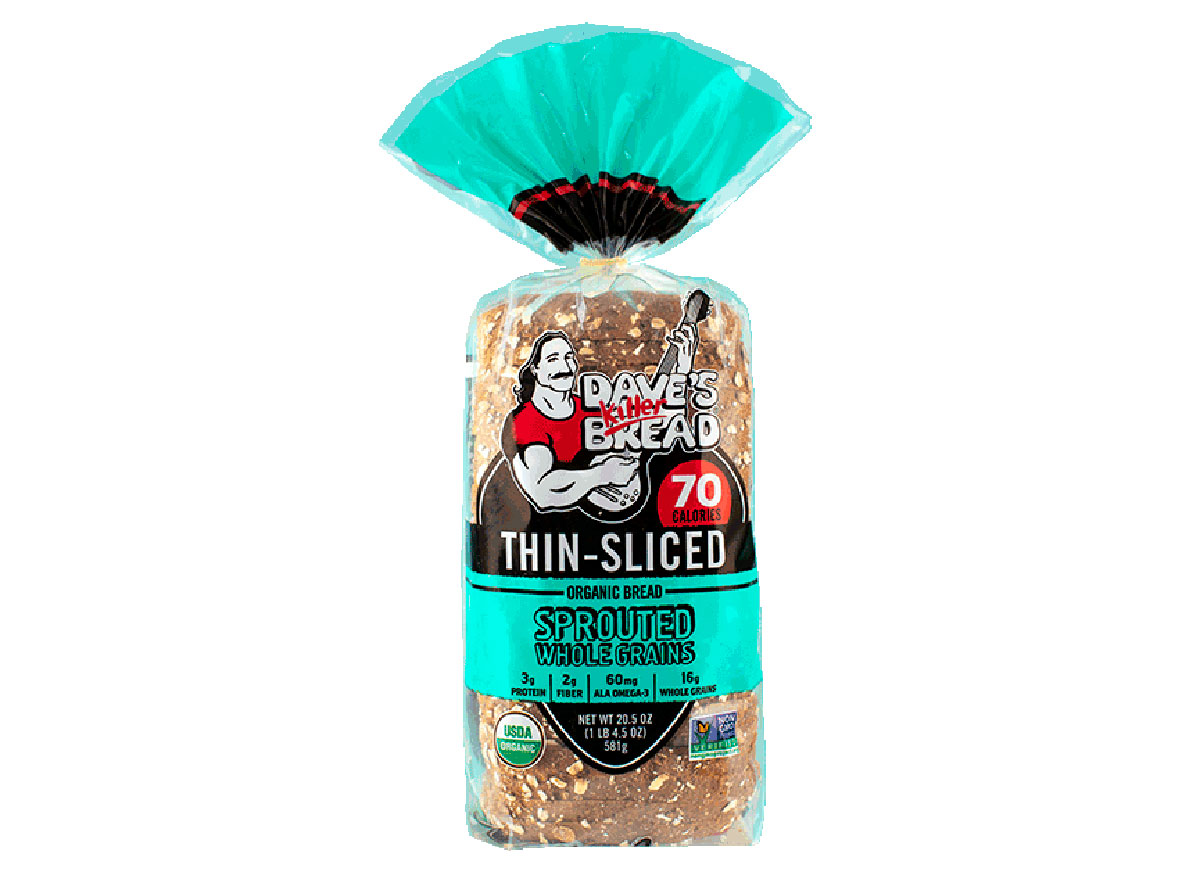 A fiber-filled sprouted bread with a blend of sprouted whole wheat, barley flakes, oat flakes, and organic ingredients. The company also has a mission – it employs many people with criminal backgrounds, allowing them to have a stable job to demonstrate their transformation. We just can't resist a honey wheat bread. This one is only 60 calories per serving and mostly whole grains. It's also super low in sodium and has no cholesterol or trans fats. Flaxseeds in the bread will also help get rid of that bad cholesterol, reducing your heart disease risk.

RELATED: What Happens to Your Body When You Honey 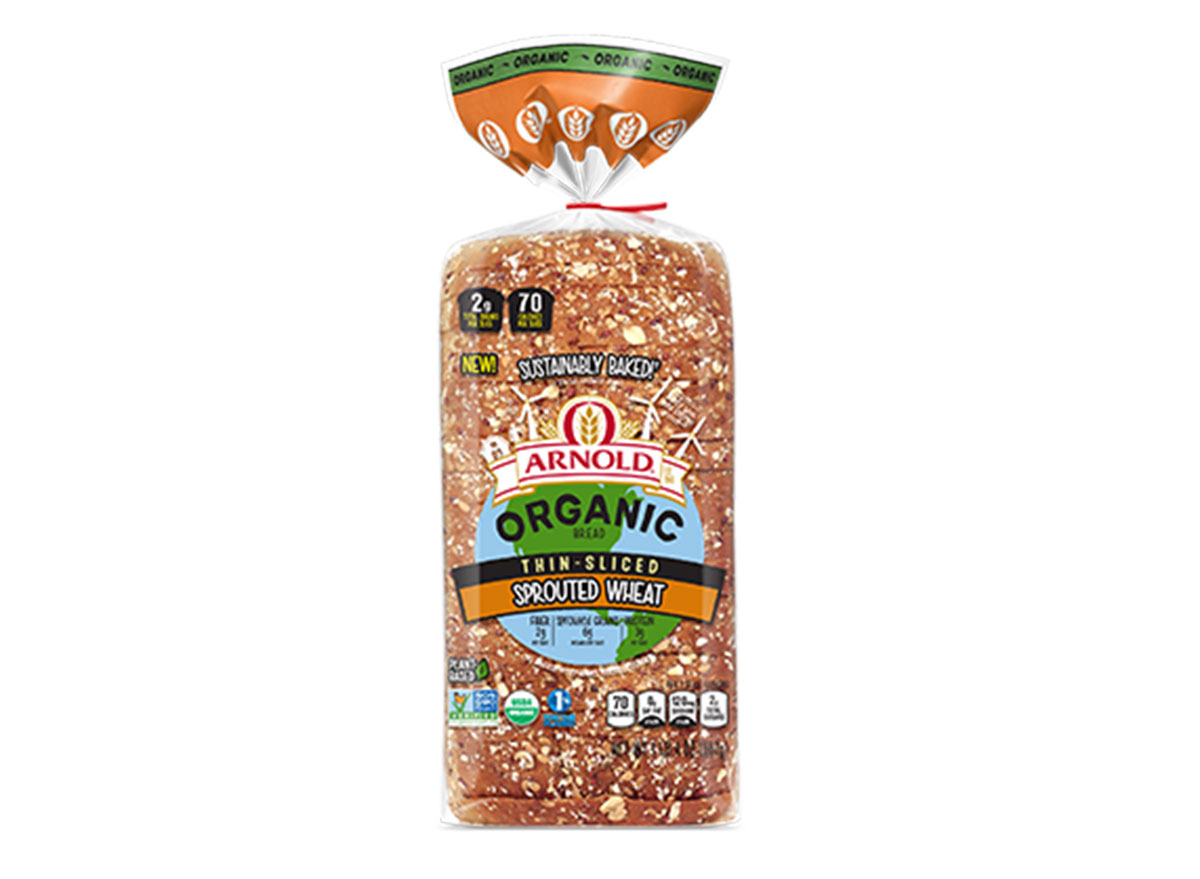 A little added cane sugar adds to the sweetness but also to the calories of this bread. Serving size is just one slice, but it remains keto at 11 carbs per serving for a perfect open-faced sandwich. The reviews say it also tastes great as well as being a healthy choice. 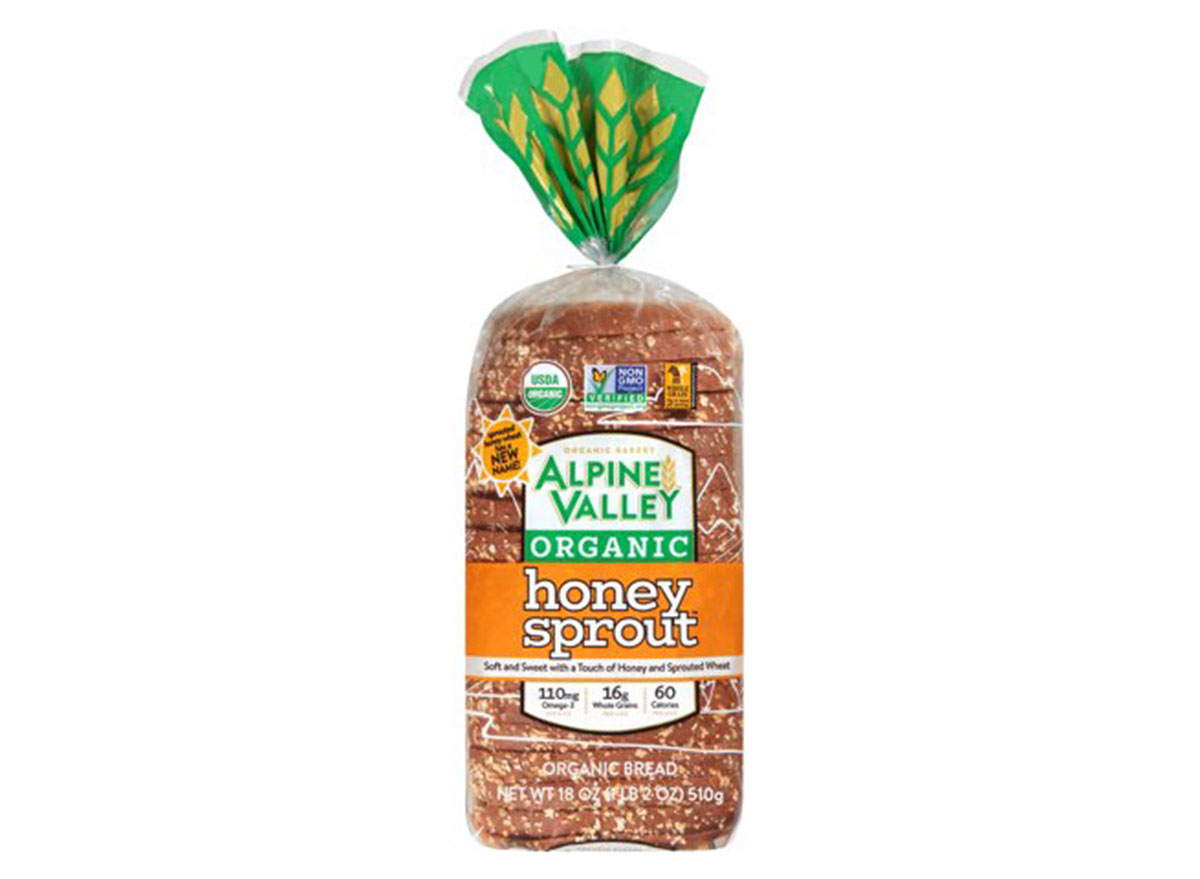 This brand stands out for being 100% whole grain. As a result, it is high in fiber, an important part of your diet to protect you from heart disease, diabetes, and cancer. Knock Your Sprouts Off has only a tiny bit of added sugar. It also has added millet for a fiber and calcium blast. The one slice serving has 13 carbs and only 70 calories, plus is low in sodium. With no MSG, no genetically modified grains, no added trans fats, no artificial flavors, no artificial colors, and no preservatives this brand is a 'yes.' It also contains millet, which is full of magnesium, phosphorus, and B vitamins. This bread is a fantastic option, 80 calories and 12% of your recommended daily allowance of fiber. The brand is really what makes this bread stand out. The Food for Life Brand is also tailored for people with different nutritional needs. It offers options for soy, wheat, and dairy allergies plus products that are low sodium and without sweeteners. 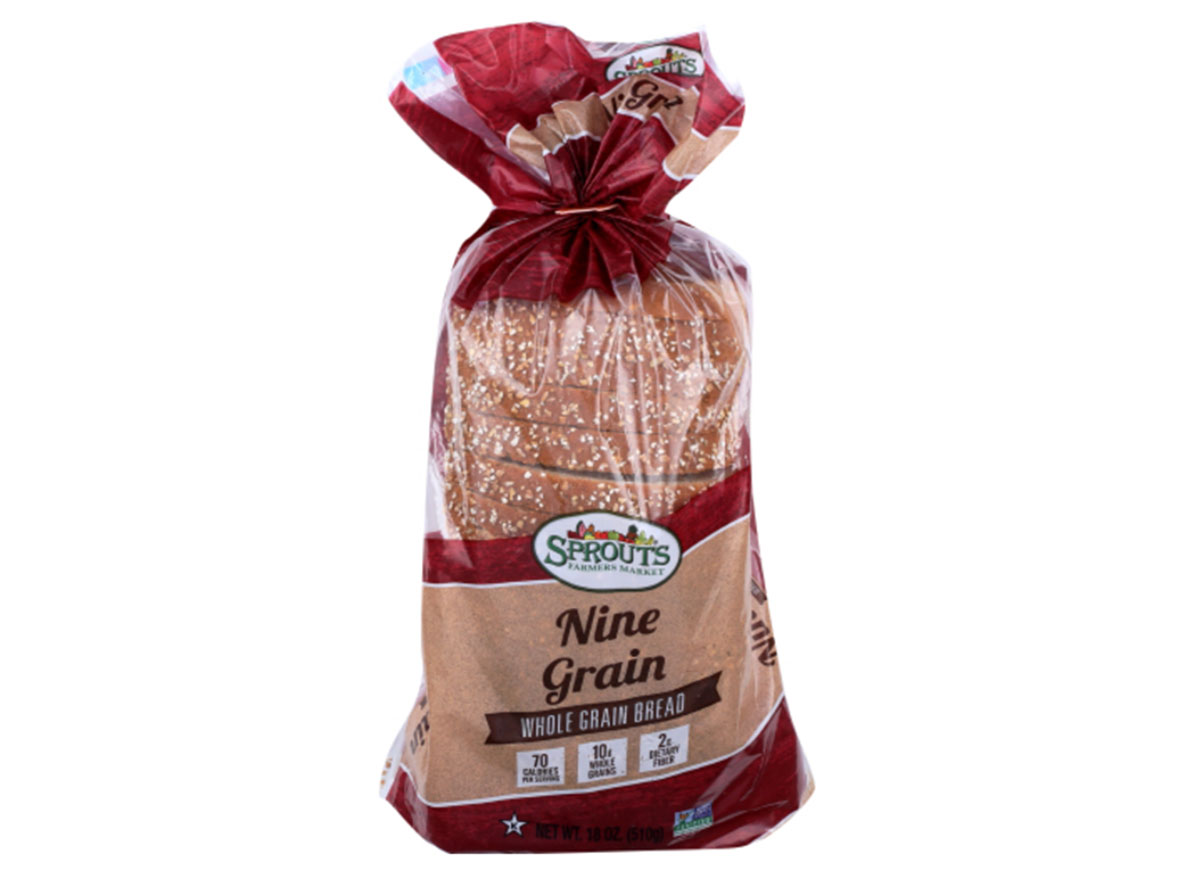 This blend of wheat, rye, barley, and millet is 100% whole grain. One slice only has 80 calories and is lower in sodium than most sprouted breads. Avoid if you have any sensitivity to wheat, but otherwise, enjoy! 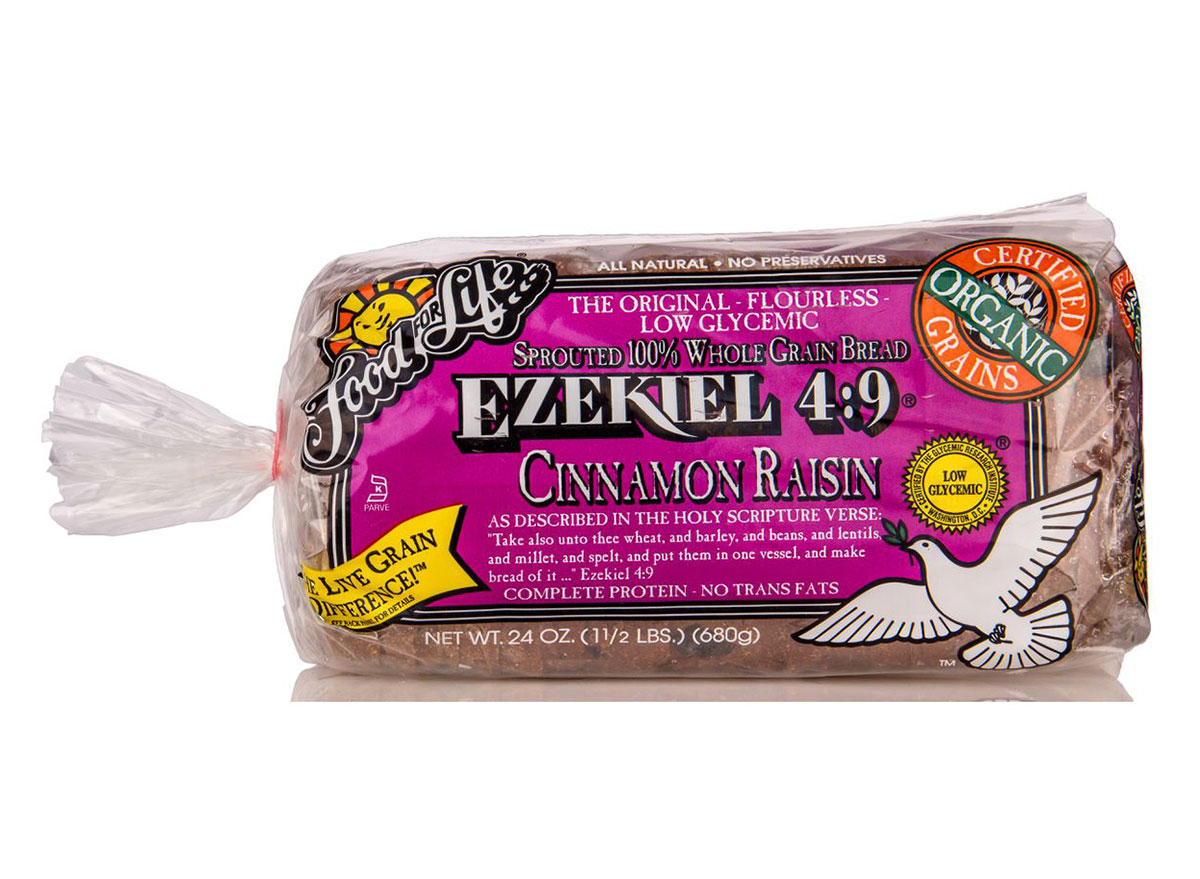 Our number one sprouted grain bread fits the qualifications that Paddison looks for in a product, "When I am looking for the best sprouted-grain products I am always looking for the most minimal ingredients and highest fiber content to really get the most nutritional bang for my buck."

Ezekiel Bread is such a cult favorite, but this is made better with the addition of organic raisins, sprouted lentils and soybeans, and organic cinnamon. Also, the water used is filtered. Talk about attention to detail!