We Tasted Every Taco at Taco Bell & This Is the Best

Forget the old-standbys, this is the new taco in town.

Taco Bell is the fourth most-popular fast-food restaurant in the country, and while the chain is known for tacos, of course, the menu has expanded exponentially over the years. The menu now includes tacos–which encompasses Gorditas and Chalupas–many different kinds of burritos, quesadillas, nachos, Crunchwraps, and occasional special creations like the Taco Pizza!

In an attempt to return to the basics, we tried every taco on the menu to determine which is the best tasting. We bit into ten different tacos, without any extra sauces or seasonings (of which Taco Bell has many), and chose the spicy beef version of each for consistency (though they also offer chicken, steak, and vegetarian options). We made no changes to the menu, eating the taco as given. The tacos were rated on appearance and overall taste.

Here are our honest opinions on all of the tacos at Taco Bell, presented from worst to best. (If you're in the mood for a burger be sure to skip these 8 Worst Fast-Food Burgers to Stay Away From Right Now.

Sorry soft taco, when it comes to eating experience this classic ranked dead last. The raw tortilla combined with unmelted cheese was an overall flop. Tasters found this taco underwhelming with too much lettuce and said it was messy as the tortilla fell apart.

The Gorditas, in general, suffered from too much dough. The outer flatbread shell was too thick to get much assistance from the inner crunchy taco. One taster noted that she had to move all the contents to the bottom of the taco in order to get any flavor. The cheese that served as a flavor layer between the flatbread and the crunchy taco was too thin. The Doritos flavor was very underwhelming as it was swallowed up by the "doughy" flatbread. It looked substantial but sadly, that was mostly just dough.

The crunchy taco fared better than the soft taco, but only barely. If you're a purist, these tacos taste exactly like those from an Ortego taco kit and they are only 170 calories, so you can knock back a few of them. The worst thing about them was that they fell apart easily, turning a handheld lunch into a mess. Tasters called them "fast-foody," "droopy," and "unmemorable." A good squirt of hot sauce could help these out but overall they fell flat.6254a4d1642c605c54bf1cab17d50f1e

The bright orange color of the Nacho Cheese Doritos gave these tacos a striking appearance, but unfortunately, this taco didn't deliver. Tasters said they "expected more from the looks" and noted that it didn't taste much different than a regular taco. For all the flashy Doritos' color, the flavor of said snack was lacking.

The Soft Taco Supreme tasted far better than the regular Soft Taco because it could be rolled up like a burrito and all the flavors combined in one bite. The sour cream seemed to help bring out the nuances in the beef and the tomatoes added a hit of much-needed acidity.

This taco somehow beat its supreme brother by one point, but it had all of the same issues with not living up to its striking color. One taster noted that the spicy beef overpowered the flavor of the Doritos shell, making this not much different than a standard taco. It did come in a Doritos branded fancy sleeve, which could have prevented some sogginess. 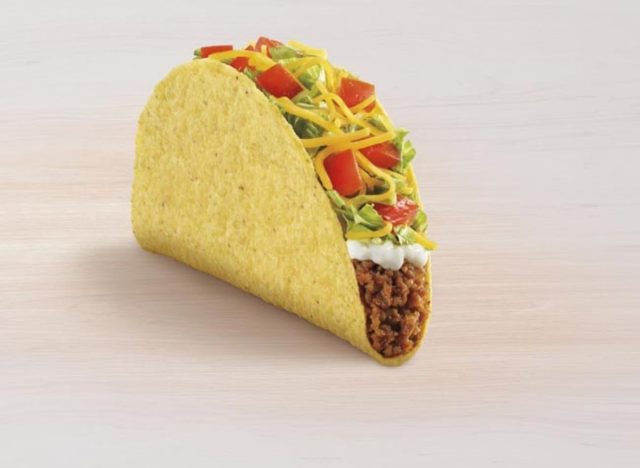 All the fun stuff—sour cream and tomatoes—on the supreme version of the crunchy taco knocked it up a few points in the ratings. Again, though, since it fell apart after a few bites, you're almost dealing with a taco salad.

This double-shelled taco looked appetizing, but like its counterpart, had way too doughy of an exterior and the melted cheese layer was woefully thin, unlike the picture on the website. Tasters couldn't get past this noting, "too much shell!" and "not enough meat to shell ratio."

The Chalupa Supreme was delicious, with each bite delivering an almost magical crunchy yet soft texture filled with spicy meat, sour cream, lettuce, and tomato. Tasters found this taco incredibly balanced in flavor and texture. These thick tacos held up to handling and ingredient manipulation and they kept their crunch throughout the meal.

RELATED: Taco Bell's "Best Burrito Ever" Is Coming Back This Week

If you haven't tried the Chipotle Cheddar Chalupa, which was launched late last year, then you haven't tried Taco Bell. This crunchy, creamy, spicy concoction is everything you want in a taco in every bite. It had all the good elements of the Chalupa Supreme–that logic-defying crispy yet tender shell–with the addition of a chipotle sauce that hovered at just the right spice level to have tasters coming back for more. Honestly, they should just do away with the crunchy taco and just put everything in a Chalupa shell, it was that good.

Read more about your favorite restaurants: