19 Things You Must Know Before Eating at Buffet Restaurants

Not only can they derail your rapid weight loss efforts, buffet restaurants can be a food safety nightmare—but only if you don't know the ropes!

There's the pile of buttery biscuits, vats of cheesy casseroles, and more fatty meat than you'd find at a Renaissance fair. And let's not forget the mounds of cookies, cake, and confections that are stacked sky-high. No, we're not walking you through scenes from the best dream ever; we're talking about buffets—delicious, wonderful buffets!

Without a doubt, they're a food lover's paradise—but they're not without their downsides. Unlimited access to high-calorie fare makes it dangerously easy to overeat to the point where you're forced to unbutton your pants on the drive home. To make matters worse, room temperature food and crowds of diners mean that buffets can easily turn into a food safety nightmare. Thankfully, this doesn't mean forgoing your favorite buffet for good, though. You just need to be smart—and we're here to tell you exactly what you need to know!

Next time you belly up, keep these pro tips in mind to save yourself from a massive stomachache—and maybe some excess pounds, too! And for even more ways dine smart away from home, be sure to read up on these 20 Things You Should Never Eat at a Chain Restaurant!

Try Not to Arrive Starving

"Stuff like pizza, fried rice, or meatballs speak to you more when you show up on an empty stomach," says registered dietician Isabel Smith. Have a small snack—like a handful of nuts or an apple with peanut butter—two to three hours before hitting the buffet. You'll be hungry again by the time you arrive, but you won't feel desperate to scarf down the first junky food you see. For even more ways to quell a raging appetite, don't miss these 15 Things Celebs Do to Stop Overeating.

Picturing Your Favorite Food Can Help You Eat Less

It's no secret that buffets are packed with the kinds of fatty, carby, crispy delights that are really tough to resist—but it is possible to stay on track. As strange as it may sound, repeatedly thinking about your favorite buffet foods before walking through the restaurant door might make you want them less, suggests one Carnegie Mellon University study. How's it work? If you imagine them enough, your brain might actually start to lose interest, researchers suspect. 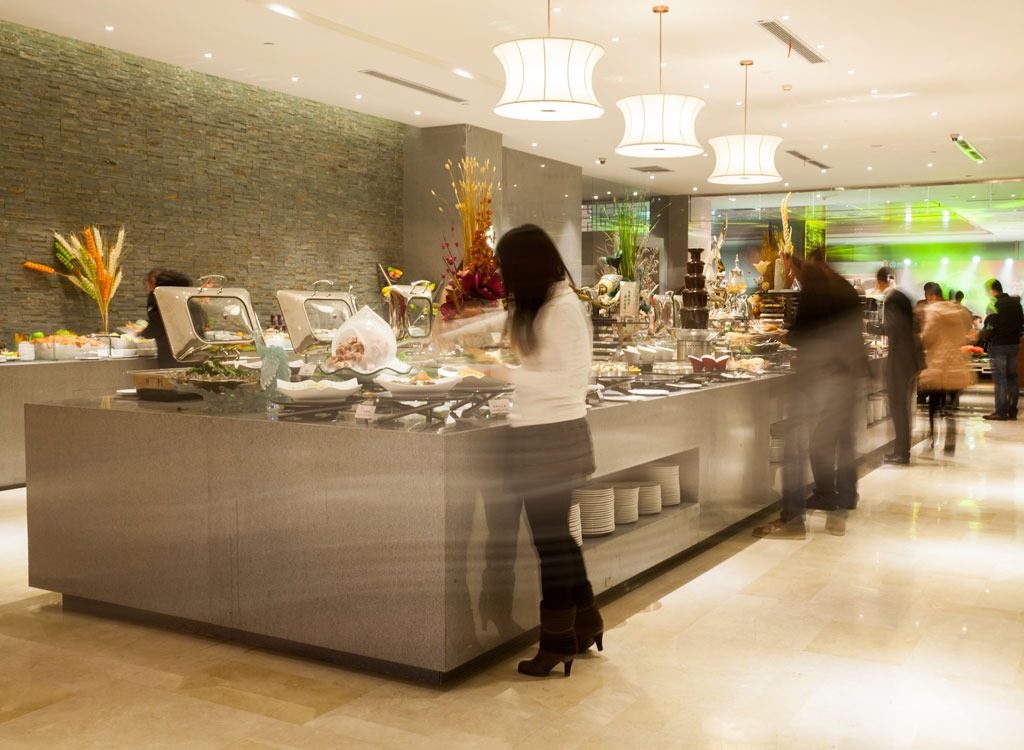 An empty buffet might seem like a good thing—you won't have to wait in line to fill up your plate! But fewer customers likely means that the food you're about to dig into has been sitting out for a while—and could be harboring illness-causing bacteria. "If a restaurant has a good number of customers, food is used and replaced often on the buffet line," says Kathleen Riggs, a food preservation and food safety expert at Utah State University's Iron County Extension. When business is slow, food sits, welcoming bugs and germs.

All Those Options Can Be Overwhelming 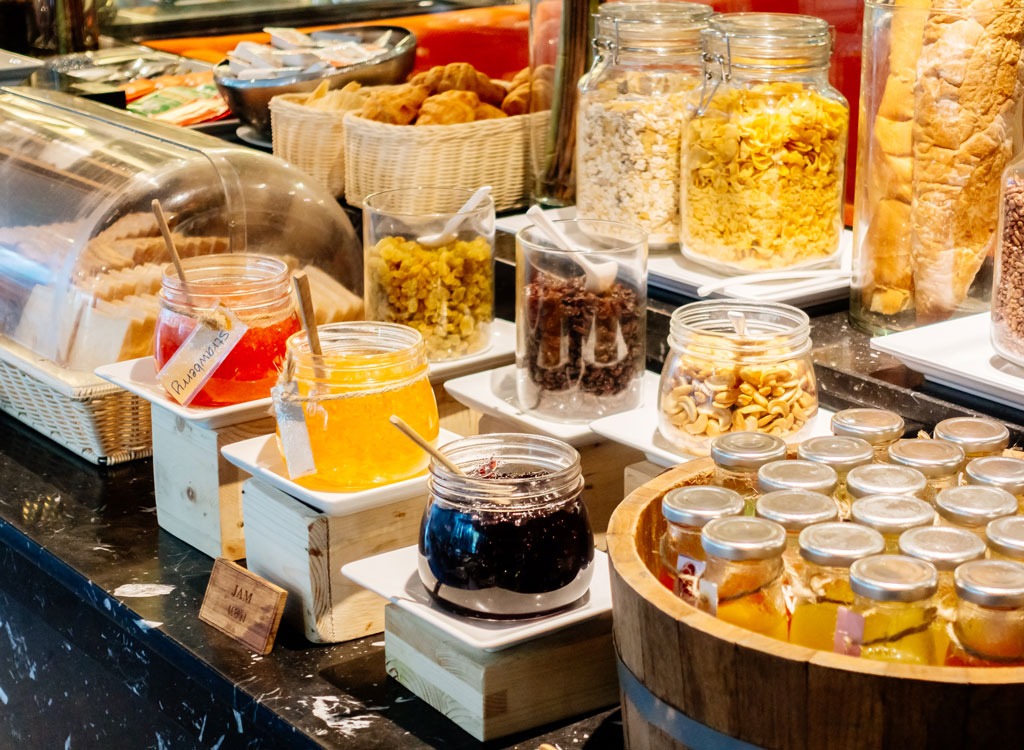 Mac and cheese, fried chicken, fettuccine Alfredo, and buttery biscuits?! Wowza! One of the main reasons people end up gorging at buffets is because there are so many tempting choices—many of which we don't normally eat at home, Smith says. With so much deliciousness, it can be harder to say no. With that in mind, if you're trying to improve your health or lose weight, it's best to not hit up buffets on the reg—especially if you have trouble with portion control. (Sound like you? These 18 Easy Ways to Control Your Portion Sizes can help!)

Explore Everything Before You Eat Anything

Buffet-goers who scan all the offerings tend to pile less food on their plates compared to those who start serving themselves ASAP, according to Cornell University research. When you know everything that's available, it might be easier to pick your favorites and ignore the so-so stuff.

Obese buffet-goers who were depressed ate more high-calorie foods after listening to a sad story compared to those who listened to a happy one, found one Duke University study. The takeaway here? You might want to see the comedy instead of the tearjerker before dinner. For even more weight loss hacks, don't miss these 50 Little Things Making You Fatter and Fatter.

It's a Good Idea to Skip the Tray 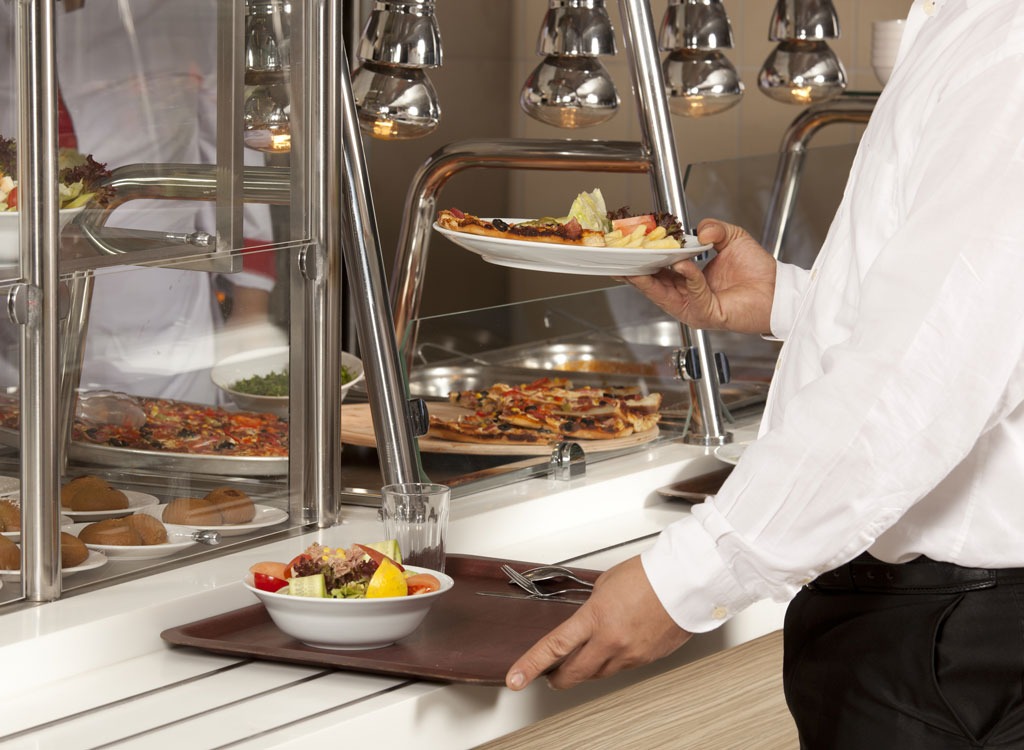 Bacteria love the warm, moist, porous surfaces of restaurant trays, which is why they're one of the most germ-covered things you'll encounter in a public place, says the National Science Foundation. And without a tray, there's no room for extras that don't fit on your plate. Sorry, we're not sorry, Mr. cheese biscuit.

An Appetizer Plate Could Help You Eat Less

Despite your good intentions ("I won't eat all of those jalapeño poppers!"), research suggests that you'll serve yourself more—and eat more—when you're using a larger plate. So grab an appetizer plate instead, Smith recommends . It could spell the difference between a meal that leaves you pleasantly full and one that leaves you uncomfortably stuffed. For more weight loss tips from diet experts, don't miss these 15 Ways Nutritionists Have Changed Their Diets Over the Past 5 Years.

Pile On the Healthy Stuff First Diners tend to make better choices when healthier foods are placed at the beginning of the buffet line, found one PLoS One study. If the beginning of your buffet is all burgers and mozzarella sticks, just skip ahead. You can always come back for that stuff later if you really want it.

The Tongs Could Be Teeming with Germs

Restaurants are required by law to replace serving tongs and spoons every four hours. Even so, practically every customer touches them, so there's virtually no way to keep them germ-free, Riggs tells us. Your best bet? "Carry and use a bit of hand sanitizer before eating your food," she says. Just don't rely on it regularly—using the the stuff is one of these 25 "Healthy" Habits That Can Make You Gain Weight. Studies show that many hand sanitizers contain triclosan, a synthetic antibacterial that can disrupt the body's hormones and negatively affect the thyroid. 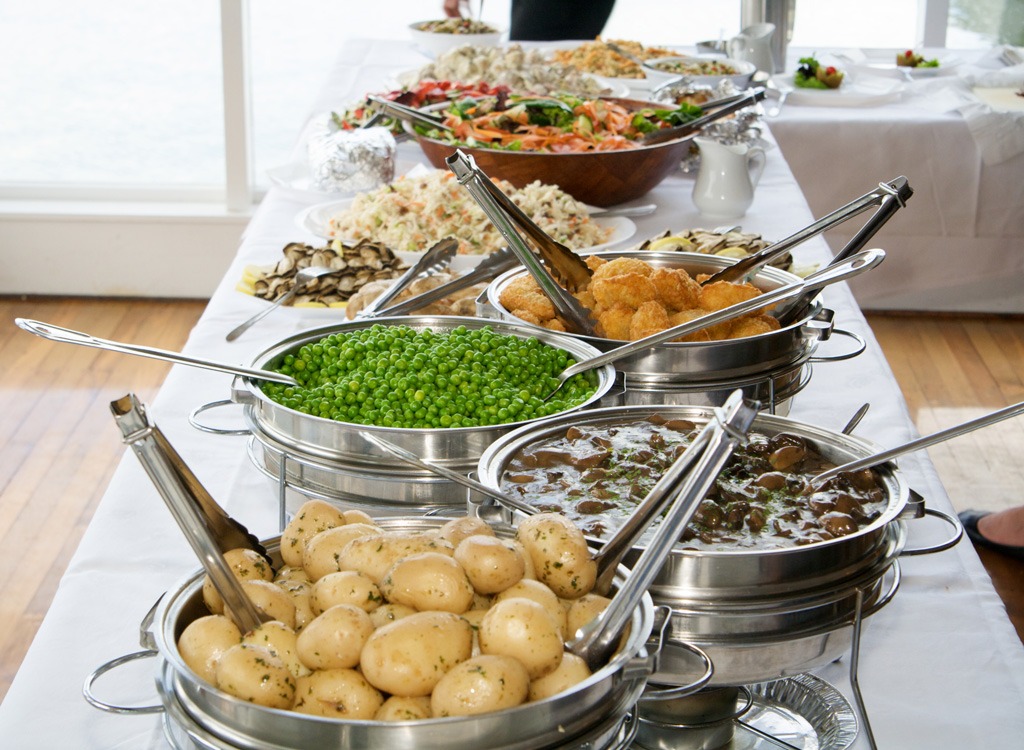 It's fine to have a scoop of scalloped potatoes or a small piece of chicken fried steak—as long as your meal is balanced overall. Aim to fill your plate with 50 percent non-starchy vegetables and 25 percent lean proteins, Smith suggests. As for that last 25 percent? Save it for whatever delicious stuff you want. Looking for even more ways to indulge a bit while still trimming down? Don't miss these 20 Cheat Meal Tips for Weight Loss Success. 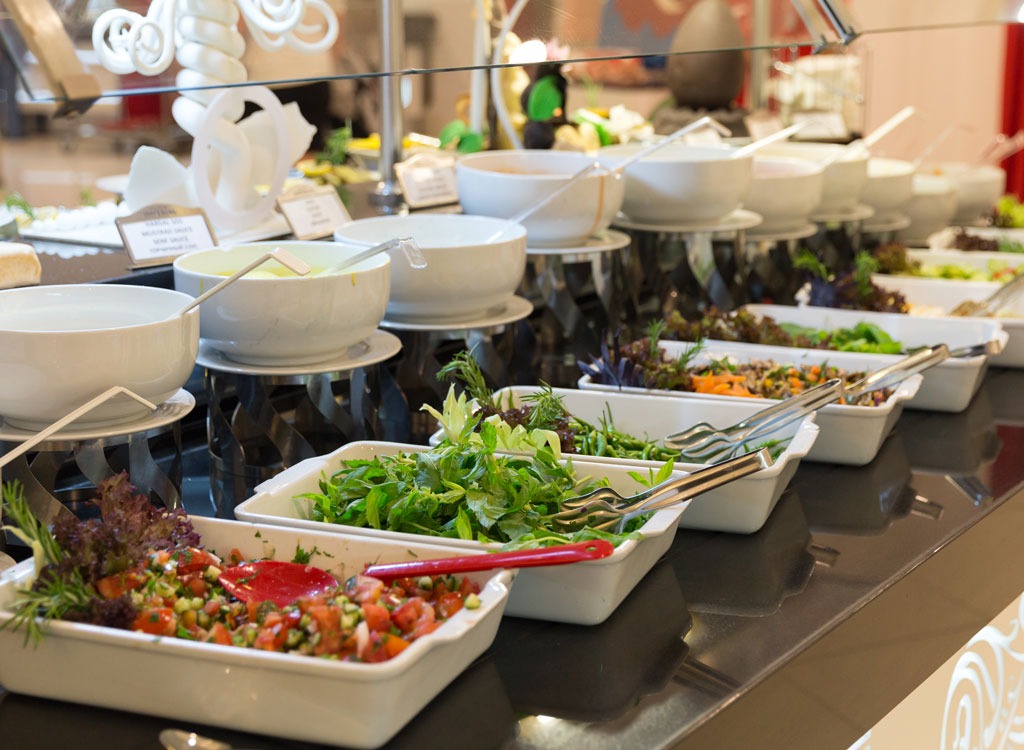 Because they're grown in warm, humid environments, sprouts are more likely than most other raw veggies to house bacteria like E. coli, according to the FDA. That's true even after they've been washed, since only cooking can kill E. coli completely. Since the buffet is already teeming with bacteria, it's best to stay away from anything that may likely already be contaminated. 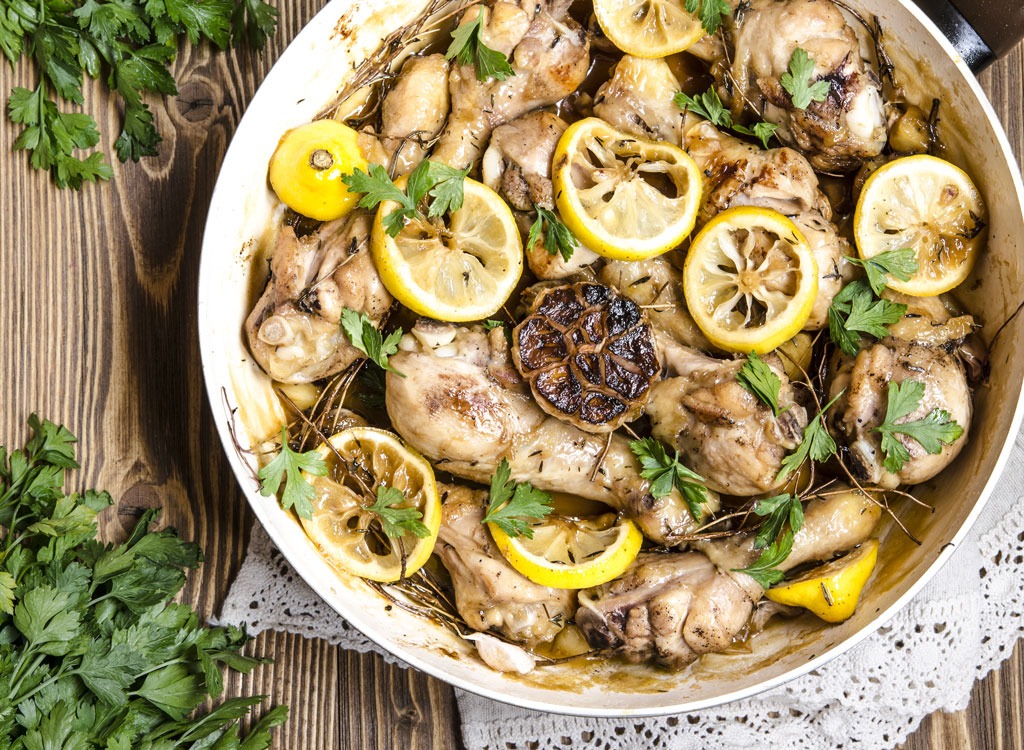 That citrusy hint of flavor in your water or iced tea probably isn't worth it. When researchers tested 76 lemon slices from 21 different restaurants, they found that 70 percent of the lemons harbored gross microbes—including E. coli that could have come from raw meat or poultry. There are some other things you may want to be wary of, too. Discover them all in our report, 20 Things You Should Never Eat at a Chain Restaurant.

Giant vats or plates of food are more likely to sit out for long periods of time, which means they're more likely to get too warm or too cool. And the longer food sits at the wrong temperature, the greater the chances it could harbor clostridium perfringens, which are nasty toxins that can cause nausea, vomiting, and diarrhea, Riggs tells us.

Be Suspicious of Squash and Potatoes

Like meat or dairy-based dishes, they could be more likely to make you sick if they aren't cooked thoroughly and held at the right temperature. "These foods are dense, difficult to heat to the center, and don't chill quickly when stored in large quantities," Riggs notes.

Don't Eat Just Because It's There 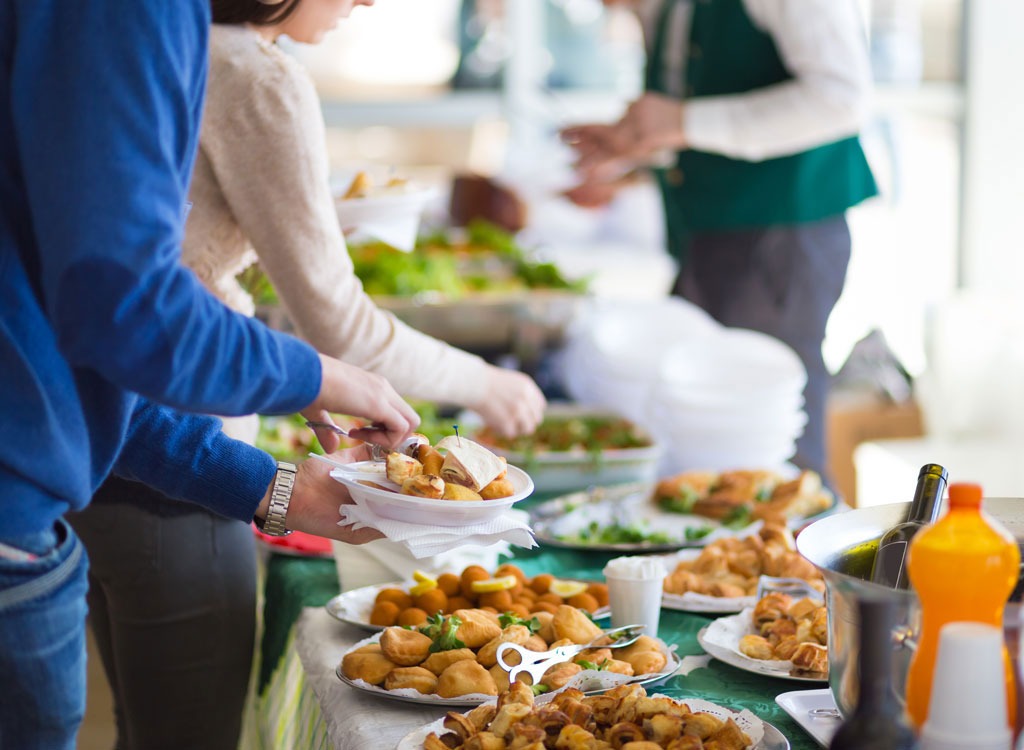 Just because that deep-fried lobster tail is free doesn't mean you need to eat it. Resist the urge to pile extra stuff on your plate just because you can. By sticking to just the dishes that you're really in the mood for, you'll avoid getting overly full on food that's just so-so, Smith notes. 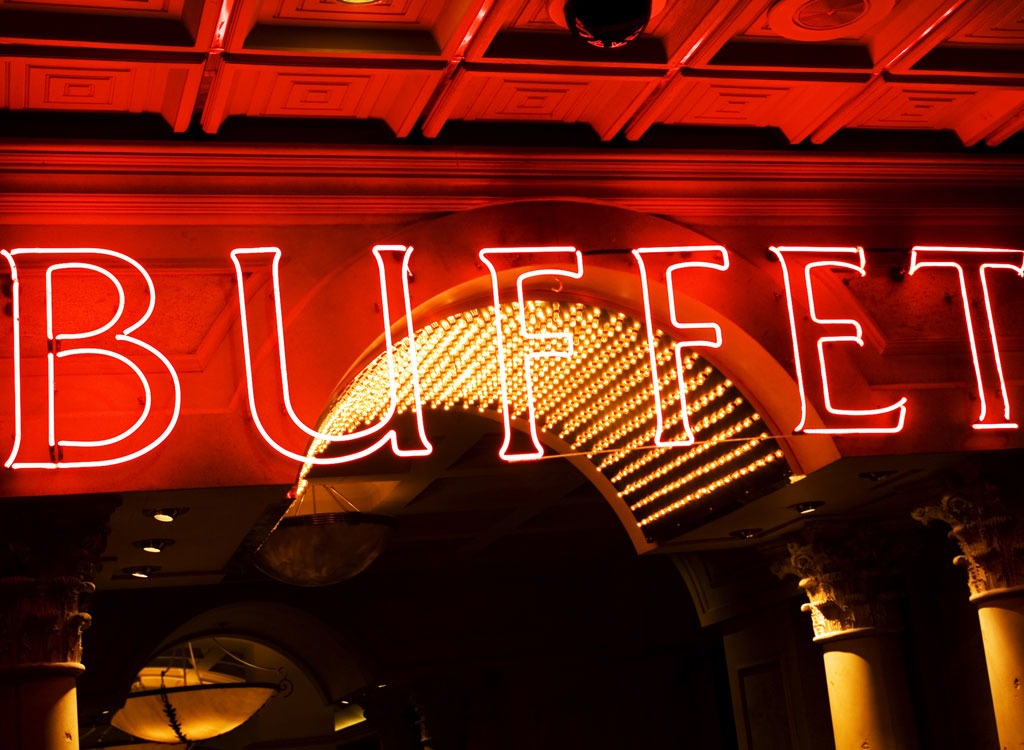 Five-dollar surf and turf, anyone? When diners were served two differently priced buffet lunches, they rated the cheaper one as tasting worse—even though the meals were identical, found a study published in The Journal of Sensory Studies.

Sit Facing Away From the Buffet

Staring at that three-layer fudge cake in the dessert case while you eat your meal only makes you want it more. So turn your back to the serving line while you're noshing. According to Cornell University findings, diners who sit with their backs to the buffet tend to make fewer trips for more food than those who sit facing the buffet.

Pause Before Going Back for Seconds

Once you clear your plate, your first instinct might be to head in for a second round. But remember: Just because you're at a buffet doesn't mean you have to reload your plate, says Smith. If you're truly still hungry, go for it. But if you're satisfied, consider staying put. Your belly will thank you later.