13 Ways You're Ruining Your Cast-Iron Skillet

Treat it with a little TLC, and there's a chance it'll outlive you.

A cast-iron skillet is essentially thought of as a solid kitchen investment. It's sturdy, you can cook so many different types of foods in it, and the pan truly can last forever. That is, if you treat it properly, of course.

"Most nonstick skillet coatings scratch off with wear and tear, but properly maintained cast-iron keeps its seasoned, stick-free surface for a lifetime and beyond. Some cooks pass skillets down through generations as cherished treasures," says Morgan Bolling, senior editor of Cook's Country Magazine (a part of America's Test Kitchen) in Boston, Massachusetts.

We're here to help you out so you can keep your beloved cast-iron skillet in gold medal condition.

Here are the most common mistakes you should avoid to keep from ruining your cast-iron skillet.

Just like any metal, iron can rust, and hot iron actually rusts quicker than cold iron, according to the University of Illinois Urbana-Champaign Department of Physics. That means your just-cooked-in skillet is particularly at-risk for rust when you let it soak.

Mistake: Putting it in the dishwasher

Yes, it bears repeating: Never put your cast-iron skillet in the dishwasher. "Don't put it in the dishwasher or let your pan soak overnight to remove any debris," says Ross Henke, executive chef at the contemporary Mexican restaurant, Quiote, in Chicago, Illinois. This appliance might be the shortcut way to cleaning dishes and other pans, but cast-iron skillets are not the place for shortcuts if you want them to last for years to come. The work you put into seasoning and caring for it will be lost after a cycle through the dishwasher, so even on your busiest nights, take the time to clean your cast-iron properly.

Mistake: Cleaning it with soap

After you cook and serve out of cast-iron (because who doesn't adore that rustic vibe of scooping cornbread directly out of the skillet?), it's time to get working on it right away.

"Clean it immediately. It's best to do while still warm," says Miles Mitchell, chief academic officer and corporate executive chef at Auguste Escoffier School of Culinary Arts in Chicago, Illinois.

The only time soap is allowed, though, is immediately after you purchase a new skillet. Give it a rinse with hot, soapy water, then banish the bubbles for good.

After the first wash, "just use hot water, a bit of salt, and a sturdy, non-abrasive brush," Bolling says.

You can also allow the skillet to cool and clean it without water.

"If you have leftovers stuck all over your pan, get as much out of it as you can by wiping it, then put the pan back on the stove with a medium flame," Henke says.

So yes, cleaning a cast-iron skillet takes some knowledge and skill!

Mistake: Not using salt to scrub it down

You can't use a heavy-duty steel wool pad on your cast-iron, so what's the alternative? A healthy dose of salt. "Add about one cup of kosher non-iodized salt to the skillet, grab an old kitchen towel, and start scrubbing the pan with the salt. Use the towel to move it around as if you were scrubbing the pan," Henke says. "Once the debris has dislodged, dump the salt into a heatproof bowl and let cool before throwing it in the trash."

We know that cast-iron skillets take more upkeep, but you should never use steel wool or a harsh scouring pad to get those stubborn bits of food to come off. Instead of letting them be, if you're really having a hard time getting food off the bottom and salt isn't doing the job, it's worth getting a special cast-iron scrubber made of chain mail that can handle those heavy-duty jobs without ruining your skillet. When you're done scrubbing under warm water, rinse and dry the skillet completely before storing.

"Once you're all done cooking, wash and thoroughly dry the skillet. Return it to the stovetop, and heat one tablespoon vegetable oil over low heat. Using paper towels, rub the oil into the skillet, creating an even, shiny black patina. Repeat this step as needed, wiping out excess oil," she says.

Lastly, "put it in a warm oven for a bit to make sure it's dry," says Ben Raupp, executive chef at The Howard, in Oshkosh, Wisconsin. A temperature setting of 250 degrees or so should do it. Need some help figuring out exactly how to season your skillet? We've got you covered there, too.

Give the skillet one last good wipe with a dry towel before storing.

"Water leads to rust, and rust is the cast-iron's worst enemy. Storing the skillet in a damp area or storing it without having the skillet thoroughly dry is a big mistake," says Ronnie Schwandt, executive chef at Maretalia and Leroy's Kitchen + Lounge in Coronado, California. "Keep it dry, and use it often. A cast-iron is an everyday skillet, so don't save it for special occasions."

Just like when you're baking cookies, preheating is clutch. This time, you're not just preheating the oven, but the pan, too.

"Preheat cast-iron in the oven to get it evenly preheated. The stove can result in hot spots," Bolling says. To do this, place your skillet in an oven set to 'off.' Turn the oven on to 450 degrees, and let the skillet heat up as the oven does the same. Carefully remove the piping-hot skillet and proceed with your recipe.

"My favorite thing to make in cast-iron is skillet cornbread. Preheat the skillet, melt bacon drippings you have reserved from breakfast in the pan, then pour in cornbread batter. This makes an excellent and perfectly browned crust," Mitchell says.

In addition to forming a nice crust on cornbread, preheating the pan allows for stellar searing and less sticking. (Read: Easier cleanup!)

Mistake: Using it for seafood

Unless you have multiple cast-iron creations, steer clear of cooking the catch of the day in your skillet.

"Avoid fish unless you are going to use the pan exclusively for seafood. Cast-iron tends to absorb the flavors of such foods and will impart that fishy flavor to your next dish," Mitchell says.

Salmon-scented apple crisp? No, thank you.

Mistake: Going too acidic too long

It's time to clear up this cast-iron myth. You can cook acidic ingredients in iron—if you follow one simple rule.

"Never let acidic ingredients, such as tomato sauce, hang out in the skillet for longer than 30 minutes. They can begin to strip off the iron and impart an odd flavor in the food," Bolling says. 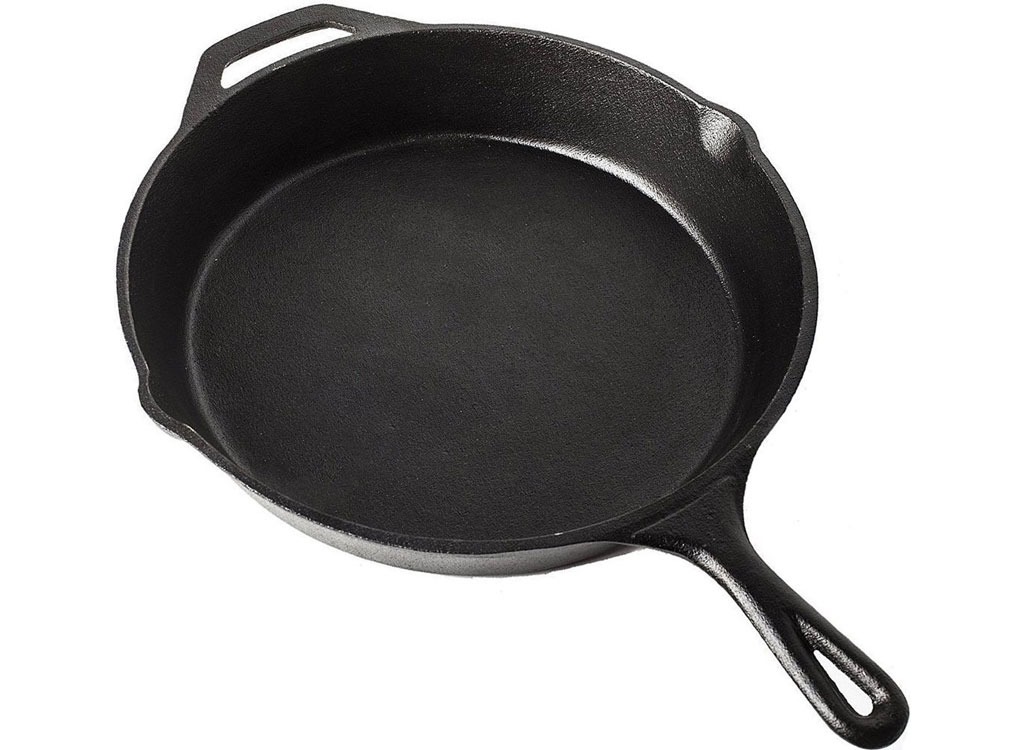 It's not a one-and-done process. Once you know how to season your cast-iron skillet, you'll know in the future how to keep it going strong (and your foods tasting amazing). If you're using the skillet every day or almost daily, you might notice that the seasoning will start to come off (a natural process that happens when you use cast-iron often) and that foods might start sticking to the skillet. These are signs it needs a seasoning again.

Mistake: Saving leftovers in it

Yes, we know it's nice to not have to clean another storage container. But no, your cast-iron skillet is not made for storing leftovers in the fridge. All of the moisture and the acidity in your recipe will speed up the skillet's breakdown and lead to rust.

Mistake: Trashing it the moment you see rust

Even if your cast-iron skillet has been neglected more than the dustiest picture frame on your wall, it can still be saved.

"Restore rusty cast-iron by putting the pan over low heat. Add enough vegetable oil to cover its bottom by about a quarter inch, sprinkle in a generous handful of coarse kosher salt, and scrub with a wad of paper towels," Bolling explains. "The salt acts as an abrasive, helping you remove any rust. Rinse the skillet under warm water and repeat as necessary until you've restored the pan to its former glory."