8 Chocolate Brands That Use the Lowest Quality Ingredients

Is that candy you're eating chocolate, or just "chocolaty?"

Did you know that in America, as in many places, "chocolate" is actually a closely regulated term? It goes much beyond the flavor of a food, and instead, deals with the details of its composition. Under FDA rules—and numerous rules, at that—a foodstuff must meet strict criteria to call itself chocolate, though that varies based on what type of chocolate is in question.

To skirt the rules, many chocolate brands will use wording like "chocolaty" or "chocolate-flavored" in order to be able to use cheaper, stand-in ingredients. Here's the thing: even within technically legal bounds, companies can still make chocolate cheaply. The secret? Usually, it's just using a whole lot of sugar, oil, and HFCS alongside the genuine chocolate ingredients. Here are 8 chocolate brands that are using the lowest-quality ingredients. And next, don't miss 10 Ice Cream Brands That Use the Lowest Quality Ingredients.

Long marketed as "Crispety Crunchety Peanut-Buttery!" but never marketed as chocolate, these popular candy bars may taste chocolaty, but technically, there's no chocolate to be found here. Butterfinger's chocolate-adjacent coating is made with ingredients like corn syrup, vegetable oil, milk, and cocoa, but it does not meet the bar for being real chocolate.

This candy bar may try to pose itself as a fancy, rich treat from a so-called "Master Chocolatier" brand, but take a closer look at the ingredient list than you do at the "50% Dark Cocoa" claim emblazoned on the wrapper. The first ingredient here is…sugar. And yes, chocolate comes second, but when sugar (or corn syrup) comes first, you'd do best to sink your teeth into something else.

Here again is a candy that bills itself as "chocolaty" because it can't call itself chocolate. These foil-wrapped Valentine's Day staples are made with only one chocolate-like ingredient, and that's "cocoa (processed with Alkali)." They also feature plenty of ingredients you'd likely rather not feature in your diet, like the artificial flavoring agent vanillin and hydrogenated vegetable oil.

RELATED: The Best Hot Chocolate in Every State

There's nothing inherently wrong with a Cadbury Dairy Milk Chocolate Bar, but there's some misleading going on here. If you love the decidedly rich, fancy Cadbury chocolate you get in Europe, then these will be a letdown, as they are made in Pennsylvania Hershey's under a license agreement from Cadbury. And while they are made with real chocolate ingredients, cocoa butter and all, note that there's trickery on the label, too, which lists the first ingredient as "Milk Chocolate," but then in a parentheses shows that the first ingredient within "milk chocolate" is simply sugar.

Delicious as they may be, it's probably no surprise that these classic candy cups are so low-priced because they're made with cheap ingredients. Yes, there is technically real chocolate here, but it's milk chocolate, in which the first ingredient is sugar. And there's also hydrogenated vegetable oil here, the go-to for companies looking to cut back on quantities of costlier cocoa butter.6254a4d1642c605c54bf1cab17d50f1e

What these chocolate patties leave out in sugar they compensate for with a number of ingredients you'd do best to avoid. That's things like maltitol, an artificially produced sugar alcohol, fractionated palm kernel oil and hydrogenated palm oil, sorbitol, and more. In short, when you cut out the sugar, you add in the chemicals–not always a good trade. 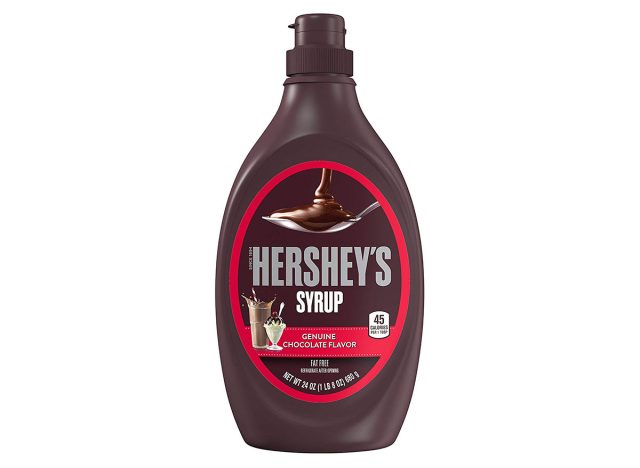 Yes, it's a classic you remember from countless glasses of childhood chocolate milk. No, it's not a chocolate product. That's why it says "Genuine Chocolate Flavor" on the label of Hershey's Syrup instead of saying "Chocolate Syrup." The first ingredient is high fructose corn syrup, the second ingredient is corn syrup, the third is water, and the fourth is cocoa. And the fifth? Sugar.

Sure, this chocolaty taffy candy has been around for more than a hundred years, but that's a testament to the American sweet tooth, not to the quality of the candy. At best a chocolate-adjacent foodstuff, Tootsie Rolls consist of sugar, corn syrup, palm oil, condensed skim milk, cocoa, whey, soy lecithin, and artificial and natural flavors. They barely touch the bar for being real chocolate and certainly don't cross it.

A previous version of this article was originally published on Jun 24, 2022.