Your sushi, stir fries, and veggie fried rice all got a lot better for your waistline.

By Emily Shiffer
This post contains affiliate links. If you use these links to buy something, we may earn a commission.

You'd think not much could stand up to the taste of soy sauce. The condiment is popular for its rich, salty taste that enhances even the simplest meals (hello stir-fry and sushi). Most of us would agree that it's tough to pass up. But, knowing a tablespoon of traditional soy sauce contains nearly 50 percent of our day's sodium intake is not something to take lightly if you're watching your sodium intake. Instead, you can opt for a tasty low-sodium alternative that rivals the flavor we love: coconut liquid aminos.

Liquid aminos, also known as coconut aminos or coconut liquid aminos, is a new product that has been touted as a healthy, lower-sodium soy sauce alternative that still packs flavor. It's gained popularity among people on the Paleo and Whole30 diets who may have more dietary restrictions. But anyone can use it. Here's everything you need to know before buying a bottle of liquid aminos.

What is coconut liquid aminos?

Liquid aminos or coconut aminos is a bottled liquid made from the sap of coconut blossoms and sea salt.

"Coconut aminos is a gluten-free and soy-free soy sauce substitute that's made from the (fermented) sap of coconut and salt," Chelsey Amer, MS, RDN, CDN, owner of Chelsey Amer Nutrition and author of Thrive in 5.

The American Heart Association recommends consuming no more than 1,500 milligrams of sodium per day, which means just two tablespoons of your average soy sauce can send you well above your daily max.

Despite its name, coconut liquid aminos tastes nothing like coconuts. And unlike soy sauce, coconut aminos has a nice sweetness to it, so think of it as closer to teriyaki sauce than a savory soy sauce.

"Coconut aminos has a delicious umami flavor, and is slightly sweeter than soy sauce, but not as salty," says Amer. "It surprisingly doesn't taste like coconut, but has a similar taste to soy sauce, making it a great substitute."

What are the health benefits of coconut aminos?

What dietary boxes do liquid aminos check off?

As for specific health benefits, coconut aminos has been noted for its amino acid content, which are the building blocks for protein, and that it possibly lowers the risk of heart disease, diabetes, and colon cancer. However, there are zero studies that exist to back up anything.

And when it comes to any negatives, if you have a coconut allergy, you should skip coconut aminos. And if you're watching your sodium intake, you should also be cautious.

"Just because it is lower in sodium does not mean that it is salt-free. Monitoring your portions will help keep the sodium content appropriate," says Sheth.

How can you use coconut aminos in cooking?

You'll find that using coconut aminos is easy, and it can be substituted for soy sauce in a one-to-one ratio.

Ideas for how to cook with liquid aminos:

However, since coconut aminos doesn't taste exactly like soy sauce, you'll need to keep that in mind and taste to preference. "You can use it as a substitute in recipes that use soy sauce, however you will need to play around with the amount and taste as it is slightly sweeter," says Sheth.

Where can you buy coconut aminos?

You can find liquid aminos at most large retailers like Target, Trader Joe's (they have their own brand), Whole Foods, and Walmart. But while you might be able to find a bottle at your local grocery store, you're more likely to find it as a specialty health food store or online.

The following are some of our favorite coconut liquid aminos brands. 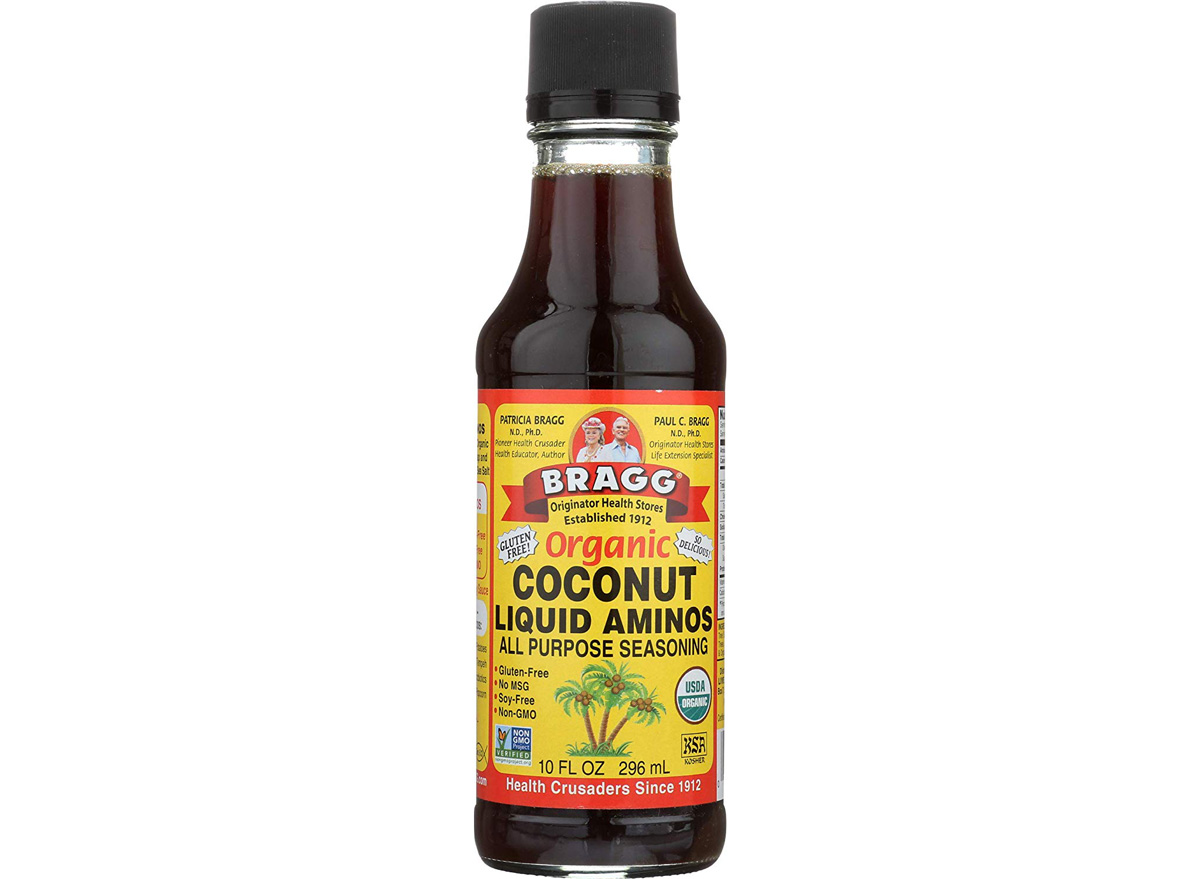