13 Foods That Cause Digestive Problems

Do you suffer from heartburn, cramping, acid reflux, or inflammation? These common foods may be to blame.

While it may be stinky and smelly, poop is a good thing—but it's not always an easy thing to do. In order to ensure your digestive system runs smoothly, you have to consume foods that can easily pass through your body after they give you an energy boost and stray from the foods that cause digestive problems.

If we're being honest, though, we're not exactly a nation of healthy food lovers. Many of us tend to favor the taste of less-than-stellar foods that cause digestive problems. These foods don't pass through the digestive system as easily as say, oatmeal, or an apple. The result? Heartburn, cramping, acid reflux, inflammation, and infection. And yes, all of these things are as horrible and uncomfortable as you might imagine.

So how can you tell if you're digestive system is suffering? You don't have to "go" every day to be considered regular, according to the Mayo Clinic; however, if you're heading to the loo for number two fewer than four times per week, it's time to get to a doctor—and then head to the grocery store.

After you've filled your cart with foods that make you poop, scan through your cabinets and fridge and toss out the foods that cause digestive problems below. While a ground beef or soy sauce may seem innocent enough, these types of foods are essentially creating an irritating, stool-stopping sludge in your stomach.

Think your daily soda or seltzer habit isn't hurting your digestion? Think again. According to a study published in the journal Nutrition, Metabolism, and Cardiovascular Diseases, drinking carbonated beverages can contribute to acid reflux. The bubbles in fizzy drinks can cause stomach discomfort and burping—a lot of burping.

Soy sauce—every sushi lover's condiment of choice—is high in something called advanced glycation end products or AGEs, according to study published in the Journal of the American Dietetic Association. AGEs are harmful because they contribute to increased intestinal permeability, which you may know as leaky gut syndrome. The digestive disorder can lead to conditions like irritable bowel syndrome, celiac disease, and even food allergies. The main lesson here: If you tend to get backed up after ordering in sushi, try skipping the soy sauce to see how your body reacts. We promise sushi is delicious without the stuff!

There are a number of reasons you should be weary of saccharin-sweetened foods. Not only has the additive been found to cause cancer in laboratory animals, a 2014 study published in the journal Nature found that saccharin damages the good bacteria that thrives in the human gut. Not only can this negatively impact digestion, it can increase the risk for glucose intolerance and diabetes, too. Ditch sugar-free sweets, jams, and canned fruits that are made with saccharin, and dial back your intake of the sweet stuff with the help of these 30 Easy Ways to Stop Eating So Much Sugar, instead.

It may be fast, but fried drive-thru grub can seriously slow your digestive system down. After you eat a plate of fries, for example, the stomach has to call on the liver and gallbladder to release bile to digest all the fat, which can stall the digestion process, according to the book "Advancing Medicine with Food and Nutrients." But the trouble doesn't end there. Fried foods are one of the foods bad for heartburn because they relax the lower esophageal sphincter, which is responsible for preventing backflow from the stomach into the esophagus. As a result, you're more likely to have acid reflux and heartburn after your meal.6254a4d1642c605c54bf1cab17d50f1e

Gut microbiome research, or the study of how the foods we eat upset or enhance the bacteria that live in our stomachs, is a growing field of research. While certain things like yogurt and kimchi help healthy bacteria thrive, other foods, when eaten in excess, have the opposite effect. For example, a study published in the journal Nature found that certain bad bacteria (which are connected to things like gut inflammation and disease) tend to flourish in stomachs of those who follow a meat-heavy diet. But fear not, protein devotees! This doesn't mean you have to give up burgers and steaks for good, just make sure your portions are reasonable and opt for grass-fed beef (one of these foods worth paying more for) instead of corn-fed, conventional meat.

The black sheep of the nutrition world, high fructose corn syrup gets a bad rep for some pretty good reasons. Not only can it make you fatter and wreak havoc on your skin, eating the stuff has been linked to gas, bloating, and stomach pain, such as abdominal cramping, according to the U.S. Departments of Health and Human Services. Sadly, it's lurking in a ton of different processed foods, from salad dressing and yogurt to candy bars and soda. The moral of the story: Be sure to read food labels before you nibble. 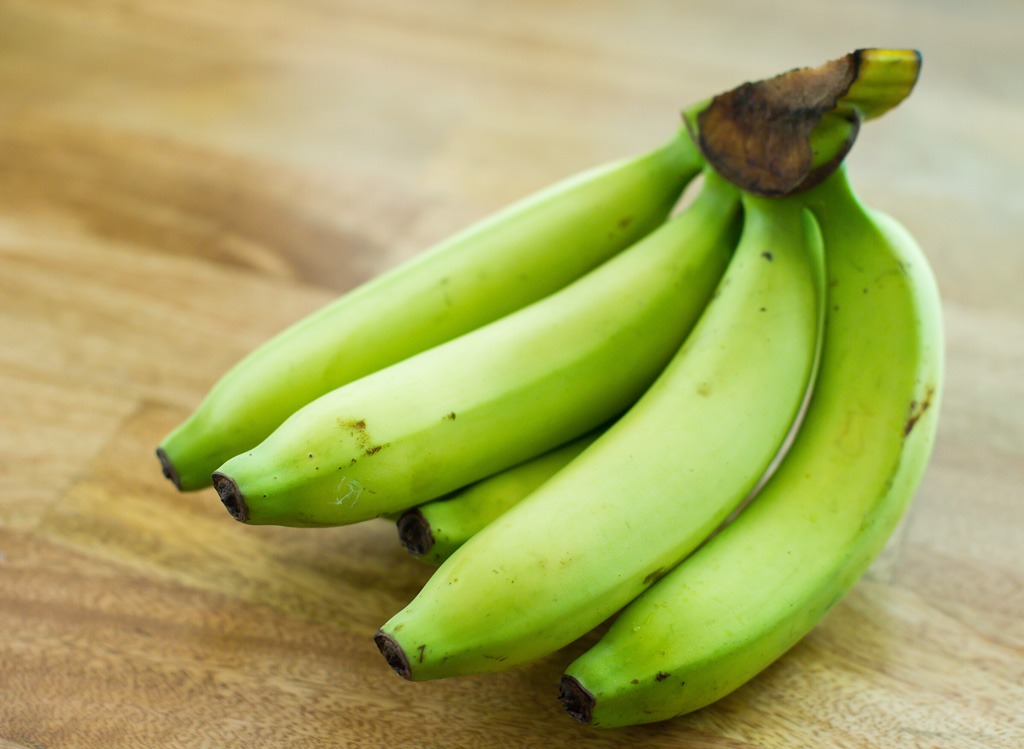 Waiting for your green bananas to turn yellow can feel as time-consuming as watching paint dry. However, there's a good reason to avoid the green ones. According to the Journal of the Science of Food and Agriculture, unripe bananas are high in tannins. In sensitive individuals, excess tannins can cause constipation by slowing down the digestive processes. (Those who don't have tummy trouble, however, can actually benefit from this slower process. Learn more about that here!) If you typically notice issues after you eat green-ish bananas, practice patience and wait for your fruit to ripen. 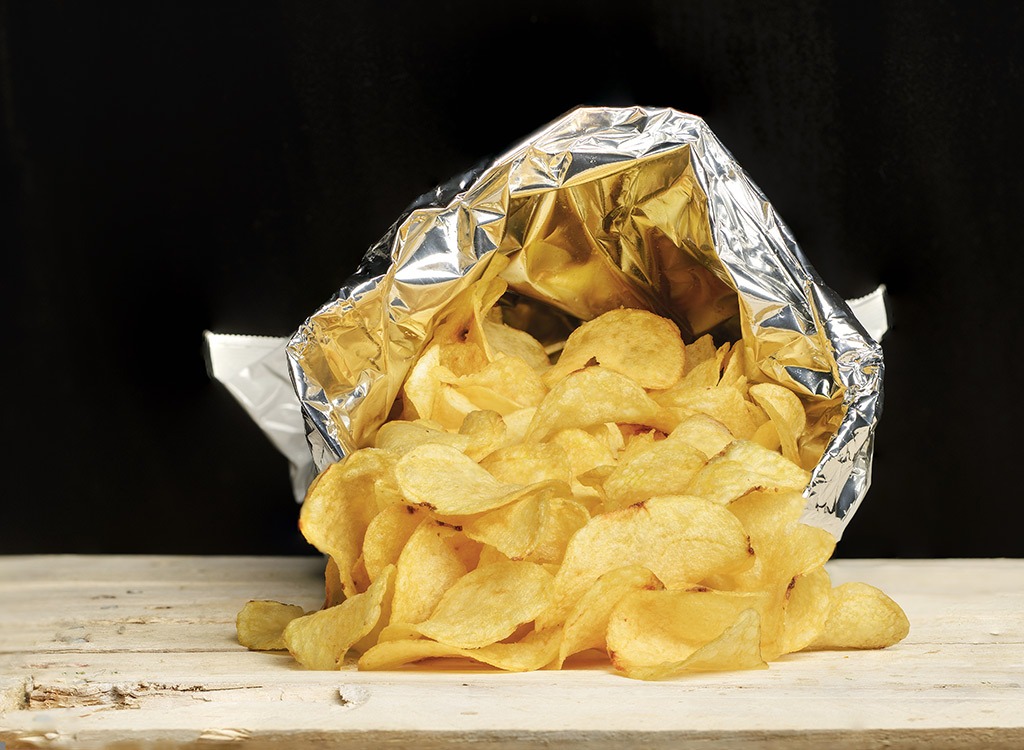 They made be super tasty, but these little flat, greasy bites of goodness can wreak havoc on your belly. First of all, they are fried, which means they're bound to give you acid reflux. The grease also means they're high in fat, a nutrient that can delay stomach emptying. Potato chips also contain the compound acrylamide, which is created in high-starch foods when they're fried, roasted, or baked, according to the American Cancer Society. Preliminary human and test-tube studies have linked this compound with cancer, so they're best to skip for your overall health, too. Not sure what to nosh on instead? Consider digging into some of these low-calorie snacks.

Eggs may be incredible, but for some people, they cause significant constipation, according to the NIH's National Institute on Aging. While it may seem surprising, egg allergies are fairly common. In fact, they're the second-most common allergy in infants and young children. If you're egg-sensitive, eating eggs could lead to some significant stomach side effects and digestive problems, such as constipation and an upset stomach so be sure to stay away!

Conventional bread, cereals, and snacks don't cause digestive problems for everyone, but they are to those with celiac disease and gluten sensitivity. To come to this finding, researchers divided 61 study participants (a relatively small group) without celiac disease into two groups. The first group took a pill each day that had almost five grams of gluten while the other group took a placebo. After a week, a significant amount of participants reported side effects related to gluten pill consumption, such as bloating, pain, difficulty thinking, and depression.

While no one can seem to agree if tomatoes are a fruit or a veggie, one this is for sure: chronic heartburn sufferers should stay away! Due to their high levels of malic and citric acids, consuming tomatoes and tomato-based foods can stimulate the body to produce gastric acid, which may cause acid reflux, according to Manhattan Gastroenterology.

We hate to rain on the donut parade, but these fried balls of dough aren't good for your waistline or your digestive processes. Not only are they fried, a cooking process that can cause acid reflux, but they're also loaded with inflammation-causing sugar–about 20 to 50 grams a pop, according to the Cleveland Clinic. Want to make a healthier version of the morning pastry at home?

Foods Made With Red Dye

Eating foods with an unnatural rich red color are about to become a lot less appealing. A study published in the journal Toxicological Sciences looked at the effects of red dye #2, #40, and #106 on pregnant and male mice. The researchers found all three types of dye caused DNA damage in the colon, stomach, and bladder. Damaged DNA can lead to a number of unwanted side effects ranging from inflammation to cancer. While we can't be certain humans would suffer the same side effects, we suggest playing it safe and skipping foods prepared with these potentially toxic dyes—especially red 40, which is one of these worst food additives.

Filed Under
Bloating // Gut Health // How To Get Rid Of Bloating