Diet, low-calorie, and zero-sugar sodas are flooding grocery store shelves, but they may be a bad choice for you.

You probably know people who love diet soda, maybe even too much. Over the past few years, the demand for diet, low-calorie, and zero-sugar versions of brands like Coke, Sprite, and Pepsi have been flooding grocery store shelves… and people can't seem to get enough. According to a report from Grand View Research, the global diet soft drinks market size is expected to reach $5.2 billion by 2025. And this, in a time when we all know the harmful health effects of drinking soda, should come with some hesitation.

Even though it has an appealing name, diet soda is one of those things that shouldn't be a part of your daily drinking routine. Not only is it bad for you, but there are six types of people, in particular, who should never drink diet soda due to its health side effects, according to doctors.

Keep reading to find out if you should be avoiding this popular drink, and next, don't miss The #1 Best Juice to Drink Every Day, Says Science.

People with a history of irritable bowel syndrome (IBS)

Diet soda is widely known in the gastrointestinal community to irritate the gut so those with irritable bowel syndrome should stay away from these popular carbonated beverages. "The artificial sugars used in diet soda are often difficult to digest or absorb by the human gut which results in bloating, diarrhea, and abdominal pain in many patients," says Dr. Jonathon Kung, MD, a gastroenterologist at Mount Sinai. "Artificial sugars in some cases are also known to alter the gut bacterial population in humans resulting in worsening gastrointestinal symptoms." 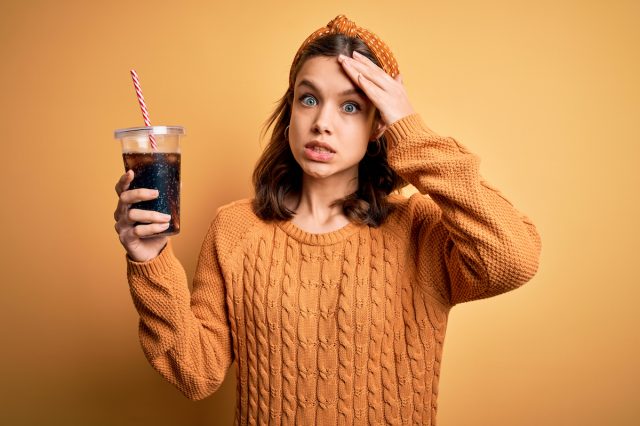 According to the Mayo Clinic and American Migraine Foundation, artificial sweeteners like aspartame, commonly found in diet soda, can be a possible migraine trigger. "Artificial sugars used in diet sodas have been linked to more frequent migraines, worsening chronic headaches, and irritability," says Kung.

Heartburn isn't fun for anyone, but did you know that diet soda could actually be one of the culprits?

"Carbonated beverages like soda are known to weaken the closing ability of the lower esophageal sphincter (which separates the stomach from the esophagus), which leads to acid reversing into the esophagus, thus causing heartburn symptoms," says Kung.

Those who suffer from heartburn may also want to stay away from alcohol, peppermint, tomatoes, and coffee.

RELATED: 6 People Who Should Never Drink Beer, According to a Doctor

People with a history of diabetes or pre-diabetes

While those with diabetes or watching their blood sugar levels might think that opting for diet soda is the way to go, they may want to reconsider. "Artificial sweeteners commonly found in diet sodas have been linked to a higher chance of type 2 diabetes and an increase in insulin resistance," says Kung.6254a4d1642c605c54bf1cab17d50f1e

Additionally, diet soda has been linked to the development of diabetic retinopathy, according to a study published in Clinical and Experimental Ophthalmology.

Similar to heartburn, those with Gastroesophageal Reflux Disease, known as GERD, will want to stay away from diet soda. "GERD is a result of stomach acid coming up from the stomach into the esophagus, often causing symptoms of heartburn, acid reflux, and indigestion," says Nicole Lindel, RD, an Everlywell advisor. "Those with GERD may have issues with citric acid [commonly found in soda], as it is acidic. Acid on acid produces more acid."

RELATED: 30 Disturbing Facts About Soda You Need to Know

Phenylketonuria (PKU) is a rare inherited disorder that causes an amino acid called phenylalanine to build up in the body. PKU is caused by a change in the gene necessary to produce the enzyme required to break down phenylalanine.

"Too much phenylalanine can be dangerous and lead to serious health problems," says Lindel. "Those with PKU follow a diet that limits consumption of phenylalanine and the artificial sweetener, aspartame, which are both ingredients in diet soda."

For more on the reasons you should consider ditching soda, check out The Worst Sodas in America—Ranked!