Thanks to a branch of biology dubbed epigenetics, we now know that altering our DNA can be as easy as shopping for these ubiquitous, healing foods.

Having good genes isn't solely reliant on luck. While you may be stuck with brown eyes and your mom's lean frame, many are surprised to learn that not all DNA is uneditable. Epigenetics—the study of how external factors alter DNA by turning genes on and off—shows us exactly how our diets can impact our genetic codes.

"'What you eat, and don't eat, can influence which genes are turned on and when,'" Kevin L. Schalinske, Ph.D., professor in the Department of Food Science and Human Nutrition at Iowa State University told David Zinczenko in Zero Belly Diet. "'Eating the wrong foods, deficiencies in the diet, and lifestyle choices like smoking, can turn things on.'"

So rather than damaging your DNA by puffing tobacco, sunbathing excessively, or stockpiling processed foods, you can modify your habits to improve your genetic makeup and, as a result, potentially prevent chronic diseases like diabetes, obesity, and Alzheimer's.

Yes, you read that correctly: the genetic hand you were dealt at birth isn't your destiny.

So instead of wishing you had won the gene lottery, you can start by revamping your grocery list. Certain foods, like the ones we've compiled below, have been scientifically proven to prevent and repair DNA damage caused by many of these bad habits making you fat. Take a peek at these foods that reverse DNA damage, throw them together for dinner, and kick the bad habits to the curb—and you'll be on your way to healthier genes, one double helix at a time.

Watercress, a delicate leafy green you've likely seen at the supermarket but were too reluctant to throw in the cart, is our top superfood that's better than kale for good reason. In a study published in The American Journal of Clinical Nutrition, researchers observed that participants showed a significant reduction in basal and oxidative DNA damage, as well as a reduced their risk of cancer, after supplementing their diets with just ¾ cup of raw watercress per day. What's more, the beneficial changes were more prevalent in the participants who smoked.

If you already toss them into a smoothie and pop them into your mouth as a snack, give yourself a round of applause because blueberries are some seriously nutritious superstars. Besides for blasting belly fat, these humble berries are potent enough to undo DNA damage. According to a study in Nutrition Research, just one 10.5-ounce portion of antioxidant-rich blueberries significantly reduced DNA damage only an hour after consumption.

We're debunking all the myths out there that dub soy milk as one of the worst milk alternatives you can buy. How so? A study in the European Journal of Nutrition discovered that the bean-based milk protected against DNA damage in lymphocytes, the white blood cells found in the lymphatic system, in men after four weeks of consuming a liter of soy milk daily. To add more of this milk into your diet, try splashing it into oatmeal, coffee, smoothies, or just chug it on its own. 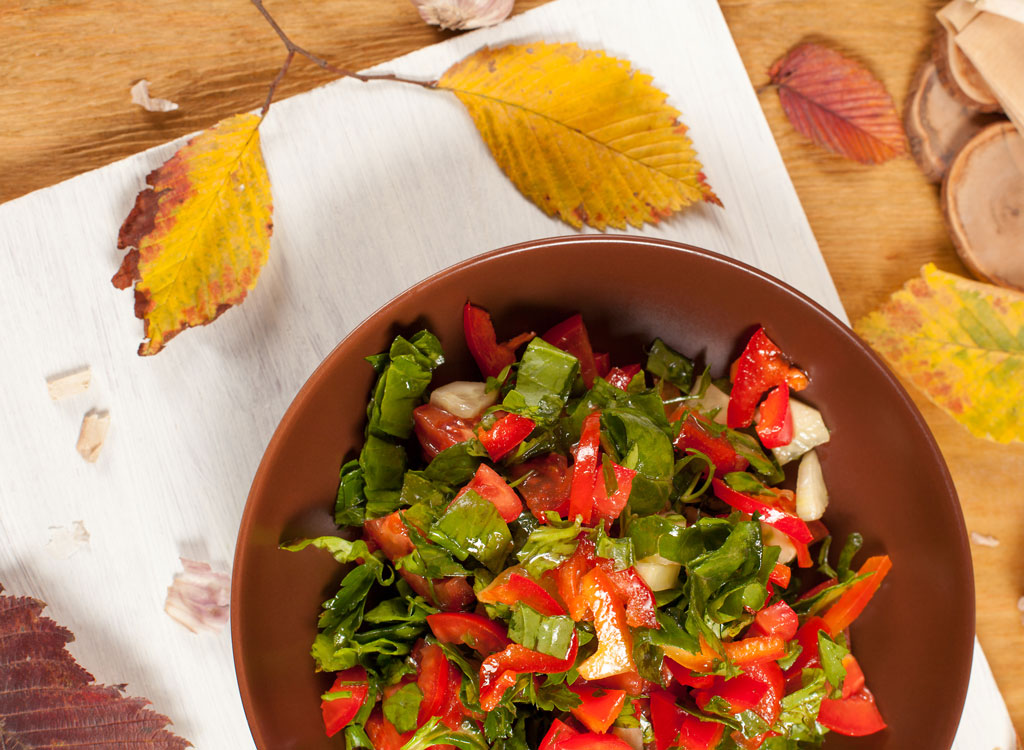 Need another reason to brown bag a salad for lunch? According to a study in the European Journal of Nutrition, enriching your diet with spinach and tomato can help your DNA resist oxidative damage. No wonder both made our list of superfoods you should eat every day!

Whether you roast broccoli as a dinner side, dip it into hummus, or simply munch on it raw, these mini trees have some seriously restorative powers. In fact, a study published in Mutagenesis found that participants who ate about 8.8 ounces of steamed broccoli daily for ten days experienced increased protection against DNA damage, especially in those exposed to free radicals, such as from smoking.

Fruit juice, the sugar-spiked bottled stuff you buy at the bodega, isn't benefiting your body at all. But if you juice up some quality produce at home, you may actually be able to mend your genetic code. According to a study in the Journal of Nutritional Biochemistry, participants who drank two types of polyphenol-rich fruit juices experienced a reduction in DNA damage. Both of the juices contained a mixture of apple, mango and orange juice, while one juice had aronia berries, blueberries, and boysenberries added and the other brew contained green tea, apricot, and lime as well.

We know that green tea is a natural fat-blaster and waistline cincher, but what else is this brew capable of? A study published in The Journal of Nutrition found that sipping four cups of green tea daily was effective in decreasing DNA damage in heavy smokers. If you plan to steep the stuff on the reg (as you should!), try these ways to melt fat with tea; #8 is brilliant!

April Benshosan
April is a born-and-raised Brooklynite who has a passion for all things health, wellness, and tastebud-related. Read more about April
Filed Under
Food & Nutrition // Healthy Foods