Here's when it's actually worth it to buy fortified foods, as long as you're avoiding added sugars...

"Added vitamin D!" "More protein!" "Extra fiber!" These things may all sound promising, but not all foods are, in fact, better off fortified. The fiber powder added to many packaged products, for example, isn't digested in the same way as the fiber that's found naturally in food. In the same vein, many products with added protein cause bloating, and vitamin D needs to be eaten with fat so that you can actually absorb it.

Like with supplements, the fortified food industry is exceedingly more complex than what meets the eye. To find out which enriched foods really are worth your hard-earned money, we turned to leading healthy experts and asked them to share their best recommendations. Discover your best options below and then be sure to steer clear of these habits ruining your diet before it begins.

Most skim milk is fortified with vitamin D and A. Vitamin D and A, however, are fat soluble vitamins that need the presence of fat for maximum absorption, which is a problem since skim milk by definition has all of the fat removed from it. "Consuming fat alongside these vitamins may help improve the absorption of vitamin D," says Janine Whiteson, MS, author, and nutritionist. "Dietary fat stimulates the release of bile into the small intestine, which helps the digestion of fat and fat-soluble vitamins such as D." If you're drinking skim milk on an empty stomach, however, this means you'll want to also eat something that's a healthy source of fat, such as an avocado, some nuts and seeds, an egg on toast, or some fresh produce with olive oil.

"Since 1998, the B vitamin folic acid has been added to many breads in order to prevent neural tube defect in infants and low birth weight," says Whiteson. "Years before pregnancy, women need to build their folate stores. Taking a multivitamin daily will help to increase folate stores, as well as eating foods that have been fortified with folate. Look at packages that say enriched; these have added folate." Speaking of bread, scope out these secrets for eating bread without getting fat!

Yep, eggs are now being fortified—namely with omega-3 fatty acids. "Eggs can be fortified with two different omega-3 fatty acids: DHA and ALA," explains Whiteson. "DHA is found in oily fish like salmon, sardines, and trout; it's vital for proper development and maintenance of brain function and can guard against heart disease, while ALA is found in flaxseeds, flaxseed oils, chia seeds, hemp seeds, and walnuts—which also may protect against heart disease." She goes on to explain that hens are fed flaxseeds and when they're digested some of the ALA is broken down into DHA and both fatty acids get transferred to the yolk. Some companies also add fish oils to the feed, too.

Almond milk, rice milk, and related products (think yogurt, ice cream, etc.), are very popular milk/protein alternative for vegetarians, vegans, or lactose intolerant people. "These products are a great source of calcium and vitamin D and A when they're fortified," says Whiteson. Make sure you're opting for products that don't have added sugars and try consuming them with some of the aforementioned healthy fat options to facilitate your body's absorption of vitamin D.

First, a disclaimer: It's best to avoid juices, which are high in sugar (even when no sugar is added) and devoid of the fiber necessary to mitigate blood sugar spikes and crashes. Instead, we suggest you opt for smoothies, which are usually rich in both fiber and protein.

If you're going to go for a juice, however, always avoid the ones with added sugars and look for ones that have been fortified with vitamin D and calcium. "Many American children do not get enough calcium, but adding it to orange juice has proven effective in increasing calcium levels and vitamin D levels, too," says Whiteson. "If you or your child are lactose intolerant or just like orange juice, this could be a very helpful way to get vitamin D and calcium." To get the most out of it, Whiteson suggests making a balanced fruit smoothie with, whole fruits, Greek yogurt, and fortified orange juice. And for a unique mix of super nutrients that will flatten your gut, boost your metabolism, heal your digestive system, and turn off your fat genes, check out Zero Belly Smoothies today!

Soy products are often fortified with calcium, vitamin D, and vitamin A, which—as previously mentioned—many people are deficient in. While these are great options—especially for vegetarians—you'll want to read labels very carefully here. Not only are most soy crops in the United States GMO, but many soy-based products have added sugars, so it's very important to closely read nutritional labels. You'll also want to make sure you're actually getting a sizeable amount of vitamin A and D and calcium. For an average person, Whiteson says that one cup of soy milk should contain 30 percent of the suggested daily vitamin D intake, 30 percent of the suggested daily calcium intake, and about 10 percent for vitamin A. "I tell my clients to choose unsweetened organic soy milk to avoid GMO soy and added sugars, and combine it with healthy fats—like in a smoothie with coconut oil or avocado—to support absorption of vitamin D," says Lauren Minchen, MPH, RDN, CDN.

"About 20 percent of all women, 50 percent of pregnant woman, and 3 percent of men are iron deficient," says Minchen. "Iron deficiency anemia is the most common nutritional deficiency and the leading cause of anemia in the United States. Symptoms include fatigue, pale skin and fingernails, dizziness, and headaches." Minchen goes on to explain that the body absorbs two to three times more iron from animal sources than plant. So, if you are vegetarian/vegan, you must try to combine your food with vitamin C-rich foods so that your body can better absorb the iron. These include foods like citrus fruit, orange juice, bell peppers, dark leafy greens, kiwi fruit, broccoli, berries, tomatoes, peas, and papayas. "Also look for fortified grains and rice to help increase your iron stores and combine them with berries to increase your iron store and make you feel more energized!"

Hemp milk is an oft overlooked dairy alternative, but it's actually a fantastic option. Made from seeds of the Cannabis plant, it contains omega-3's and 6's and is often fortified with calcium and vitamins A and D. Find out the Best and Worst Milk Alternatives so you know which products are a drink this and which are a not that!

For the most part, probiotics are fragile and can't withstand excess heat. So, probiotics that survive the baking process are a relatively new innovation spearheaded by brands like Purely Elizabeth (they created the world's first ever probiotic granolas). Purely Elizabeth uses a resilient strain of vegan probiotics that work to boost gut health and keep pathogenic organisms in check thereby boosting both a healthy digestive and a healthy immune system.

When buying cereal, Minchen suggests looking for whole grain cereals fortified with B6, B12, and folic acid. "White grains are also fortified with these vitamins, but whole grains are the best choice for blood sugar control, weight management, and fiber for fullness and healthy digestion." 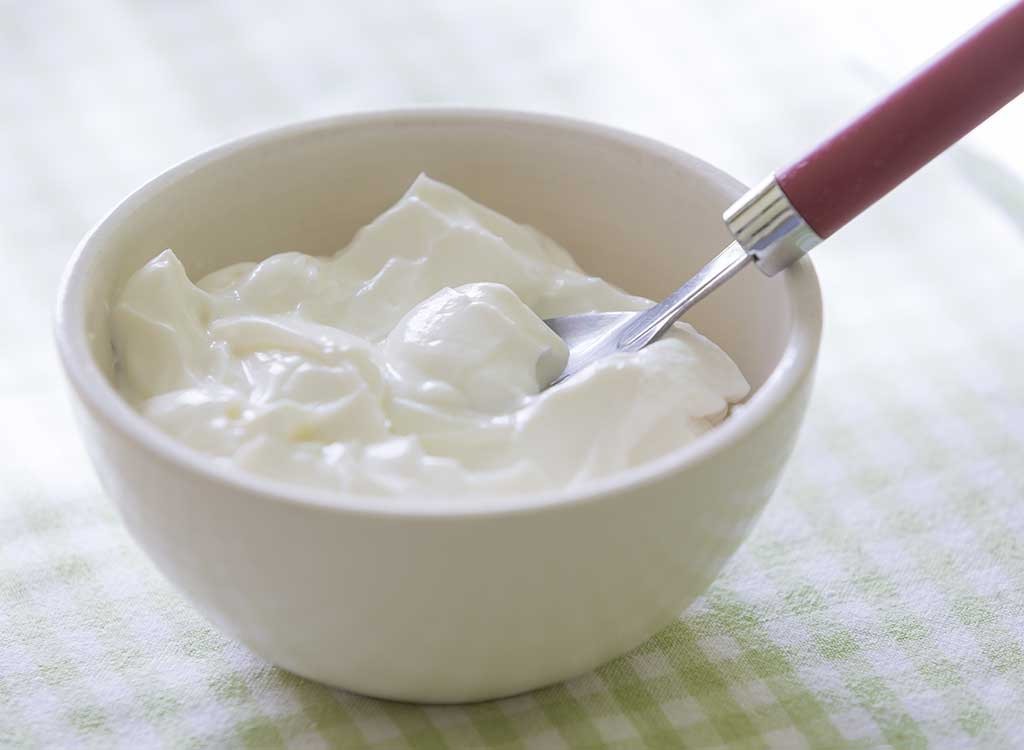 Certain yogurt brands like Chobani, Greek Gods, and Zoi Greek add calcium and vitamin D. "When buying these, choose full fat—4%—for maximum absorption of vitamin D and other naturally-occurring nutrients in the yogurt, like calcium, magnesium, and potassium," says Minchen.

Although salt is a necessary part of a healthy diet, it's very sneaky and found in very high quantities in many foods, particularly packaged ones. You should make a conscious effort to consume a restrained amount, as well as making sure it's quality salt when you do consume it. When adding it to your foods, opt for fortified salt that contains iodine, an essential nutrient that helps prevent developmental disabilities, cognitive impairment, and goiter. Salt in processed foods does not contain iodine (in case you needed another reason to avoid processed junk!), and iodine deficiency is the leading cause of preventable brain damage in the world. Having salt with iodine is especially important if you don't consume seafood.

Fortified whole grain oatmeal may help lower your risk for heart disease and type 2 diabetes (especially if you use it as a replacement for refined grains), but many of these benefits go out the window if you opt for sweetened fortified oatmeals. Fortified oatmeals are high in B vitamins, folic acid, vitamin A, and iron. Some also have added calcium, so make sure to carefully read nutrition labels to avoid unnecessary added sugars, chemicals, and preservatives! And to make the most of your oats, check out these ways to lose weight with oatmeal!