Have a Better Fat-Burning Workout with These Vitamin B1 Foods

Imagine you're a brilliant chemist and you've just discovered the world's first water-soluble vitamin. It's like body sculpting gold for people looking to lose weight.

Now the challenge: What do you name the vital nutrient? Muscle-in? Thighs-are-lean? What about tone-amine? The Japanese researcher who indeed made the discovery came up with aberic acid, which researchers then renamed aneurin, then thiamin, thiamine, and eventually "B1." Womp womp.

The good news is the generic name doesn't put a damper on the vitamin's fat-burning, muscle-toning benefits. Adults need 1.1 mg of thiamin daily, and you can only get it though your diet. Here are the top 10 dietary sources of vitamin B1. Read em. Eat em. Then hit the gym!

Part anti-inflammatory, part fat-burner, the humble tomato is brimming with workout-boosting antioxidants that can get you faster results, experts say. Athletes who sipped on tomato juice after strenuous exercise had quicker levels of muscle recovery than a group who drank a regular sports energy drink, a recent study from Greece found. And in previous research, dieters who sipped a small cup of the juice every day for 8 weeks lost an inch from their waists — independent of dietary or lifestyle shifts.

Adding lean, unprocessed cuts of pork to your meal plan will leave you anything but porky, research suggests. In fact, people who substituted beef and chicken for 1 kg of fresh lean pork per week (about 5 ounces per day) saw significant reductions in weight and belly fat, without any adverse effects on cholesterol, a recent study in the journal Nutrients found. Researchers say it's pork's high protein content and particularly rich amino acid profile that may increase calorie-burning and lead to weight loss.

Sunflower seeds, as they're rich in magnesium, may be the ultimate salad topper for uncovering lean muscle tone. One study published in Journal of Nutrition found an association between higher magnesium intake and lower fasting blood sugar and insulin levels — great news for dieters, as increased levels dampen the body's ability to burn fat for fuel.

Beans, beans, good for the heart, the more you eat the more you … lean down? Research suggests black beans may be one of the best fat-burning sources of carbohydrates on the planet. One half-cup serving packs a whopping 11 grams of resistant starch, a type of slow-digesting fiber that helps prevent blood sugar spikes and improve weight loss. Swapping just 5% of daily carbohydrates for resistant starch could increase fat metabolism by 23 percent, one study published in Nutrition & Metabolism showed.

White rice gets a bad rap for being nutritionally inferior, as it's lower in fiber than whole-grain varieties and ranks higher on the glycemic index — a measure of how quickly blood sugar rises in response to food. But while high GI foods are typically associated with insulin spikes that lead to fat gain, the blood sugar uptick is exactly what you want after a heavy lift. The surge acts like a high-speed shuttle that promptly picks up sugar from the blood and delivers it straight to muscles for lean growth, without any dilly-dallying that can result in fat gain. (And use this cooking trick for how to make rice with half the calories!)

The best whole-food pre-workout supplement may be a sesame bagel. That's because sesame seeds are rich in L-arginine, an essential amino acid shown to improve carbohydrate metabolism during exercise. The amino acid is also a precursor of nitric oxide — a compound that dilates the blood vessels and enhances the coveted bodybuilder "pump," a rush of blood, oxygen and nutrients to the muscles that amplifies growth. 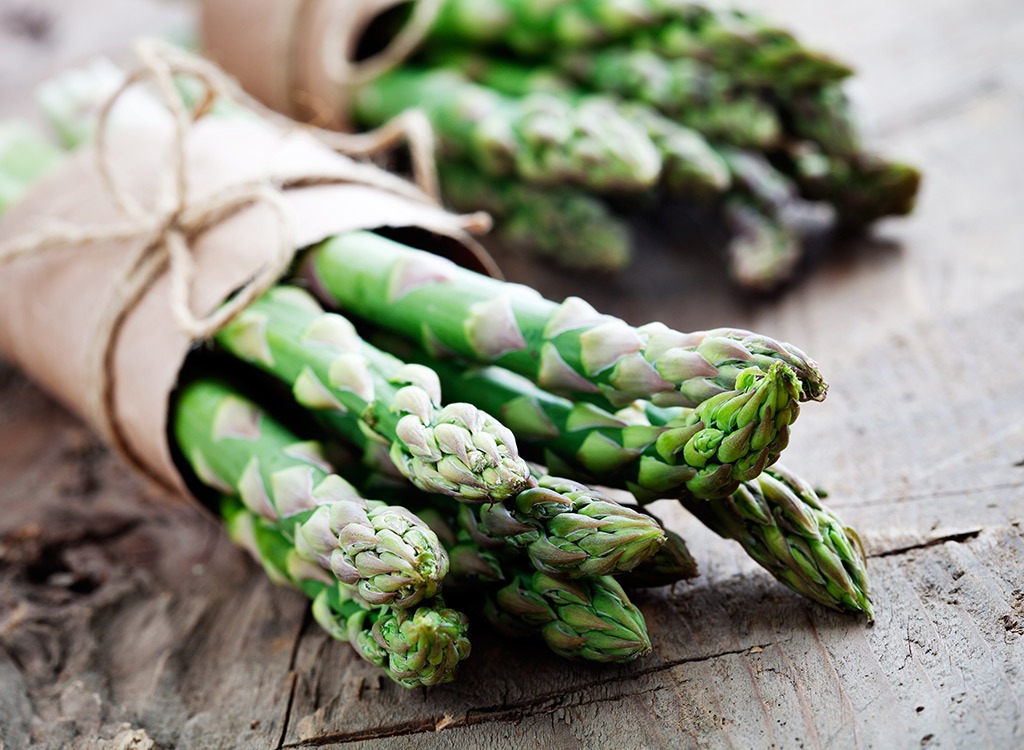 A healthy serving of asparagus acts as a diuretic, helping to flush excess fluid from the system — and it could also help you torch more calories at the gym. That's because the vegetable is rich in quercetin, an antioxidant that mimics the effects of exercise by enhancing the production of mitochondria, the energy-producing units in our cells. A daily dose of 25 mg/kg — about what you'll find in 12 spears — could double mitochondrial DNA and increase endurance by 36 percent, one study in the American Journal of Physiology found. 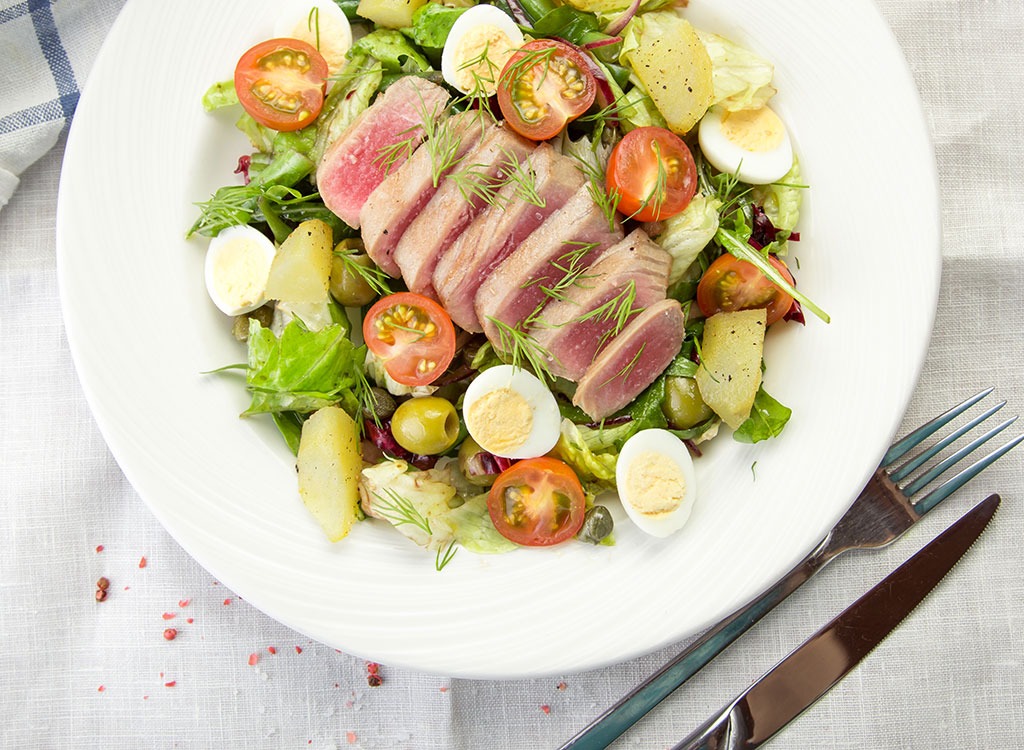 Ryan Reynolds said in a Men's Health interview that tuna was one of the foods he eats for lunch. A lean source of muscle-building protein, yellowfin tuna is also a terrific source of docosahexaenoic acid (DHA), a polyunsaturated fatty acid with proven belly fat-burning potential. In fact, supplementing with omega-3 could effectively switch off abdominal fat genes, one study in the Journal of Lipid Research showed. Just be sure to choose yellow over blue or white: Due to their smaller size, yellowfin tuna tend to have significantly lower levels of mercury than dark-red bluefin and white albacore varieties, which rank among the most toxic, according to an analysis published in Biology Letters.

Oats are a well-known source of soluble fiber, the type linked to lower blood cholesterol. But they also contain nearly an equal amount of insoluble fiber, a form of starch with powerful body-shaping benefits. Researchers say the indigestible "prebiotic" fiber stimulates the good bacteria in our intestines to produce short-chain fatty acids that aid digestion, namely acetate—a molecule that acts as an appetite suppressant—and butyrate, which has shown to speed up calorie burning.

Throw a cup of pineapple into your post-workout protein shake to boost fat burn and recover faster. The high-glycemic carb will help shuttle the protein straight to your muscles while providing 100% of your recommended daily allowance of vitamin C — a nutrient researchers say is directly related to the body's ability to burn through fat. The tropical fruit is also brimming in bromelain, an enzyme used to treat acute inflammation and aid muscle recovery. In fact, bromelain supplementation was as effective as an over the counter drug at relieving pain and stiffness in one study among hip osteoarthrosis patients.