We dug to the bottom of the bucket to find out more about that delicious fried chicken.

You may be familiar with the ever-present rotating red and white chicken basket and the wholesome face of lovable Colonel Sanders, but do you probably don't know the actual story behind the franchise that's been around since 1952.  There are so many secrets about KFC and founder Colonel Sanders' famous recipe, it's hard to know what is fiction and what is fact, but we dug in to find out the history of the brand, menu hacks, items to avoid, and even some insight into that secret recipe (maybe).

And of course, not to turn you off to your bucket of chicken, but there are some things you should know before ordering your lunch or dinner. (Plus, come back to find out 11 Secrets Texas Roadhouse Doesn't Want You to Know.)

The idea for KFC started in a gas station.

While you may know the Colonel from the ads starring Jim Gaffigan, he was a real person named Harland David Sanders who spawned a fast-food empire with his chicken recipe. Sanders began selling food to travelers from a gas station in Kentucky. As History points out, he became a hit with travelers selling his simple country fare of country ham, okra, biscuits, string beans, and similar items as an alternative to the typical diner food found along the highways. And in 1939 he discovered that using pressure cookers to perfect his quick-frying chicken coated in his secret recipe of 11 herbs and spices.

Colonel Sanders took aim (with a gun!) at a business rival.

An aggressive marketer, Sanders painted advertising signs on buildings for miles around his gas station slash restaurant, according to History. Matt Stewart, who ran another local gas station, started painting over his signs, and when Sanders found out he rushed to stop him, accompanied by two Shell executives. And, according to Josh Ozersky's book Colonel Sanders and the American Dream, Stewart grabbed his gun and fatally shot Shell district manager Robert Gibson. Sanders returned fire and wounded Stewart in the shoulder. Stewart was sentenced to 18 years in prison for murder, but charges against Sanders were eventually dropped.

RELATED: KFC Is Making These Major Changes to Its Iconic Chicken Sandwich

White pepper might be the secret to KFC's recipe.

That 11 herbs and spices recipe has always been a secret, until, in 2016, a writer for the Chicago Tribune unearthed what is purported to be the actual recipe with all 11 herbs and spices—including the white pepper. While we can't be 100% sure it's the real recipe, white pepper is unusual and the flavor profile described in the recipe does match the flavors of KFC.

RELATED: The Best and Worst Menu Foods at KFC

Not for the faint of heart, gizzards are a muscle in a chicken's digestive tract that holds all the dirt chickens pick up when pecking in the dirt—it aids the birds in digesting their food. A lot of people love them, and after they were removed from menus a few years back people demanded them back and created a Return Livers, Gizzards to KFC's Menu Facebook page. The campaign proved so successful that KFC brought gizzards back to select locations.

RELATED: What Happens to Your Body When You Eat Fried Chicken

You can still hack a Double Down.

KFC's famous bunless Double Down sandwich—in which bacon, sliced cheese, and the Colonel's Special Sauce sat between two fried chicken filets—is no longer on the menu, but if you order the individual components, the staff will put the deep-fried madness together for you. The one element you can't get? The special sauce, sorry!6254a4d1642c605c54bf1cab17d50f1e

They don't want you to think about the chicken being fried.

If you're of a certain age, you know KFC used to be called Kentucky Fried Chicken. Why the name change? Bloomberg reported in 1991 that the name change was part of a rebranding in an attempt to make the chain at least seem a little bit healthy. Using just the initials removed "fried" from the name and at least seemed to give the restaurant a different image. However, Snopes claims the name change was due to a trademark issue with the state of Kentucky.

The founder of Wendy's actually came up with the famous chicken bucket.

Believe it or not, Dave Thomas, the man behind Wendy's was an early KFC employee and franchise owner. According to The Balance Small Business, Thomas came up with the idea for the iconic red and white striped chicken bucket, the streamlined menu, and the rotating chicken bucket signs.

RELATED: KFC Is Nearing the Completion Of Its Revolutionary New Product, Its President Says

KFC loves stunt food and the attention it gets the chain, and in 2014 they offered a prom-ready fried chicken corsage, according to the Los Angeles Times. For those who were brave enough to buy this for their date, a florist sent the corsage structure and some baby's breath, along with a $5 KFC gift card. That way, the buyer could purchase fresh fried chicken and arrange it themselves.

You can turn your KFC biscuits into tasty sliders. 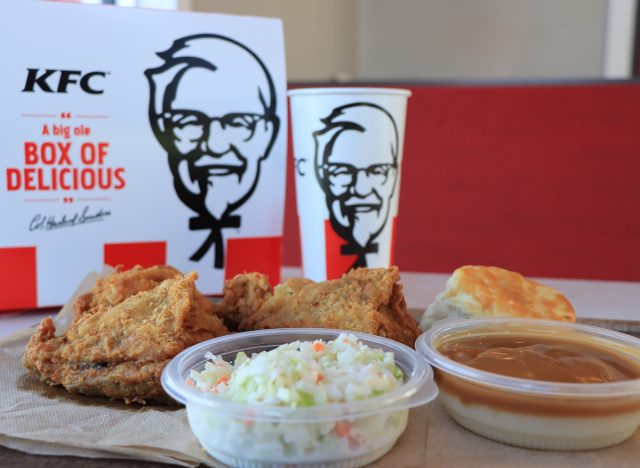 This one is super easy, according to Buzzfeed. Order biscuits, coleslaw, and original recipe. Slice the biscuits in half, then add some shredded chicken and top with coleslaw. A dab of BBQ sauce might be good too!

You can get fish donuts and shrimp stars (just not in the U.S.)

Okay bear with us here, but KFC Singapore is pretty wild. According to Mashed, in 2012 the chain's Singapore franchises started selling Shrimp Stars and Fish Donuts. What does that even mean? Well, they're less offbeat than they might sound. Shrimp Stars are shrimp nuggets in the shape of stars that are breaded and deep-fried, while Fish Donuts are fish patties breaded and deep-fried in the shape of donuts.

Skip the famous bowl if you're trying to eat healthy.

If you love your health, maybe avoid this bowl that's stacked with rich mashed potatoes, popcorn chicken bites, cheese, and gobs of gravy. It's also packed with 720 calories, 34 grams of fat, and an eye-watering 2,370 milligrams of sodium.