18 Delicious Ways to Use Up Leftover Pasta Sauce

With these delicious and healthy recipe ideas, your extra pasta sauce will never go unused again!

If you've ever put a jar of half-used marinara into the fridge only to find that it's become moldy and gross by the time you go back to use it, you're not alone. It happens to me, like, all the time. I always intend on using up the leftover spaghetti sauce but I seem to lose track of my jar as it gets buried deeper and deeper in the war zone that is my fridge. This means that I'm not only wasting food, but I'm also wasting my hard-earned cash.

But I'm turning over a new leaf, guys. In an attempt to be less wasteful and more creative in the kitchen, I set out to find some easy and unique ways to use up my extra marinara. Whether you find yourself with a few leftover tablespoons or an entire cup, you're sure to find something here you'll want to whip up. But before you start scrolling through all the yummy ideas, sort through the best and worst pasta sauces to ensure the jars in your shopping cart are healthy ones. After, be sure to check out our list of the 100 Easiest Recipes You Can Make. 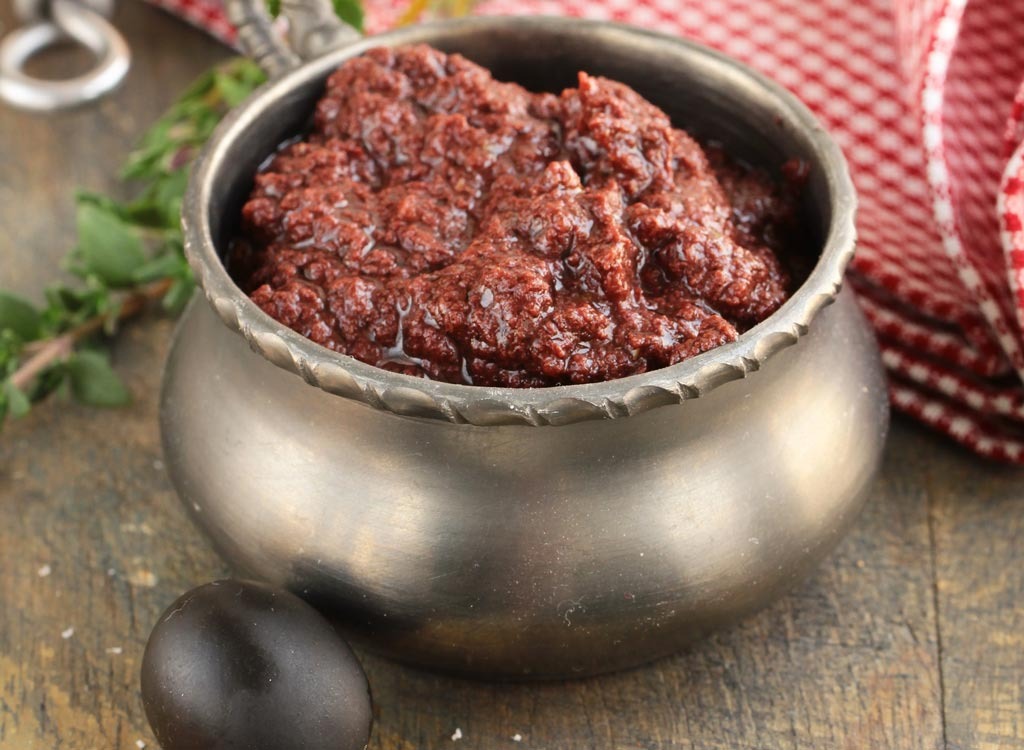 Have company coming over for a night of Heads Up and drinks? Wow them with a delicious tapenade that only looks complicated to make. To make it, combine 1 cup of pasta sauce with a 1/2 cup of chopped Kalamata olives, 1/2 cup of chopped roasted peppers, and a tablespoon of capers. Garnish with some chopped parsley and serve with carrots, celery, and crackers. Or if you want to get extra fancy, mix the tapenade with some store bought hummus and then smear the concoction onto slices of French bread. Top each one with some arugula for a punch of color and peppery flavor. 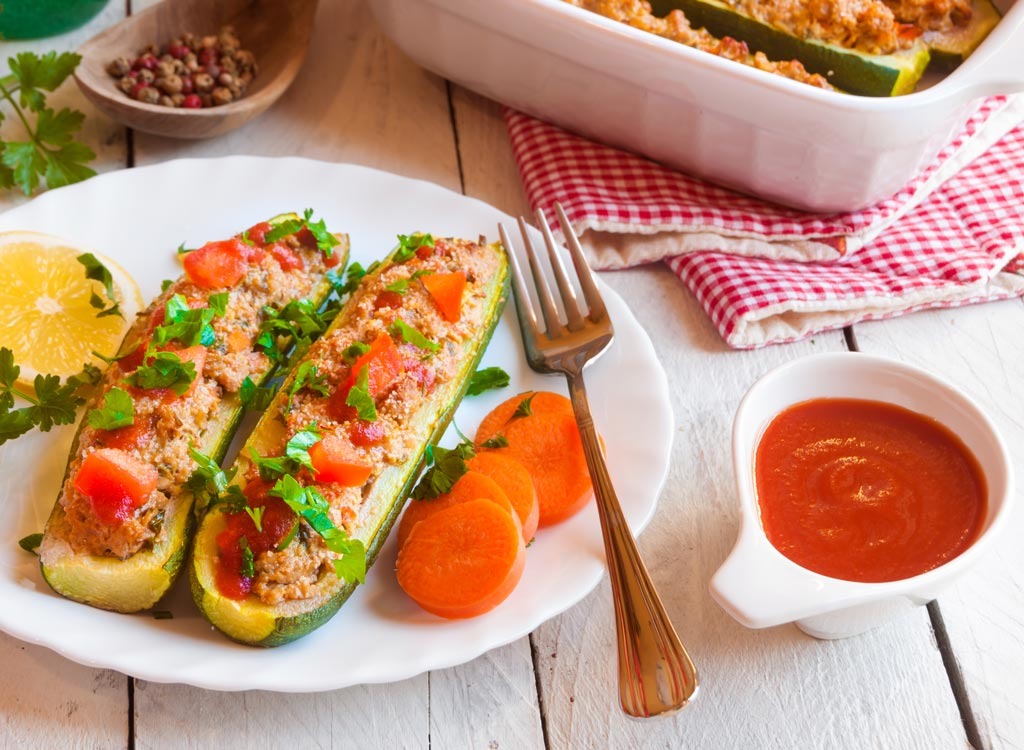 If you've been looking for a no-fuss, healthy side dish to accompany all of your go-to Italian-inspired entrees, this is it. To make the dish, start by preheating the oven to 350°F and slicing four zucchinis in half, lengthwise. Then, scoop out the seeds with a spoon and brush both sides of the zucchini with extra virgin olive oil. Place on a foil-lined baking sheet and add some tomato sauce, chopped tomato, grated Parmesan cheese, rosemary, thyme, salt, and pepper to taste. Bake for 15 minutes and then broil for the last 3 minutes, or until the cheese is slightly brown.

Eggplant Parmesan for One 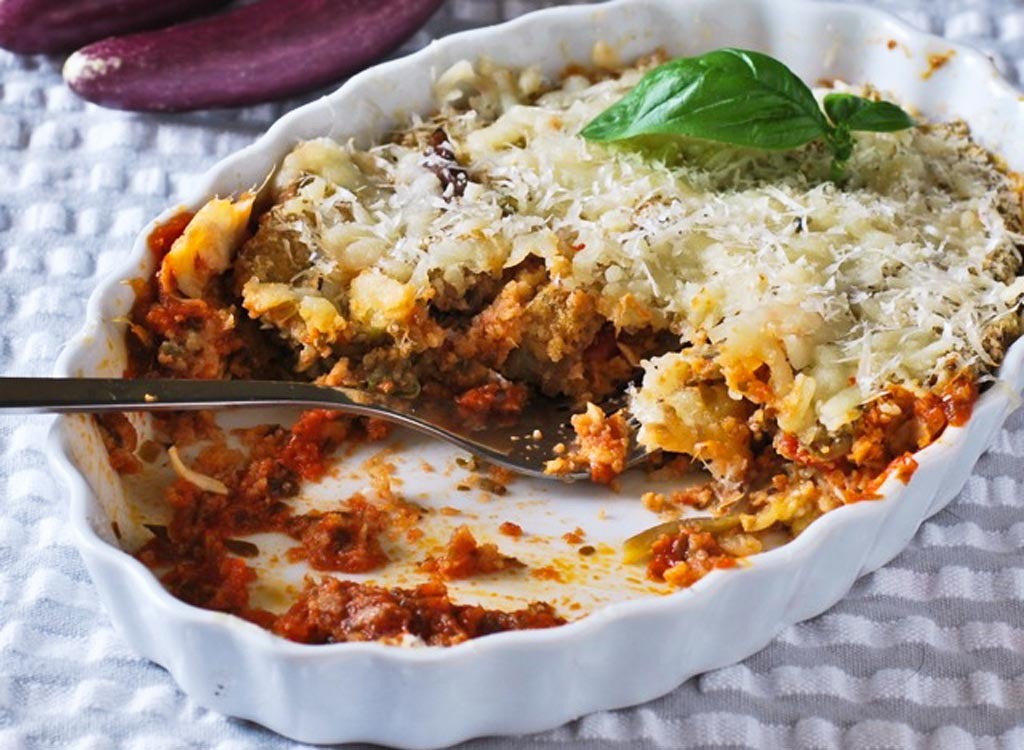 As tempting as it may be to simply zap a frozen meal on the nights when you're eating dinner alone, you're better off eating something that's fresh. (Trust us, your taste buds will thank you!) Next time you're nibbling and Netflixing solo, consider making this Eggplant Parmesan for One by food blogger Betsy of BetsyLife.com. Aside from the ½ cup of marinara—which you already have—the recipe only calls for five additional ingredients. And since the eggplant is baked—not fried—this comforting dish is one you can feel good about digging into. 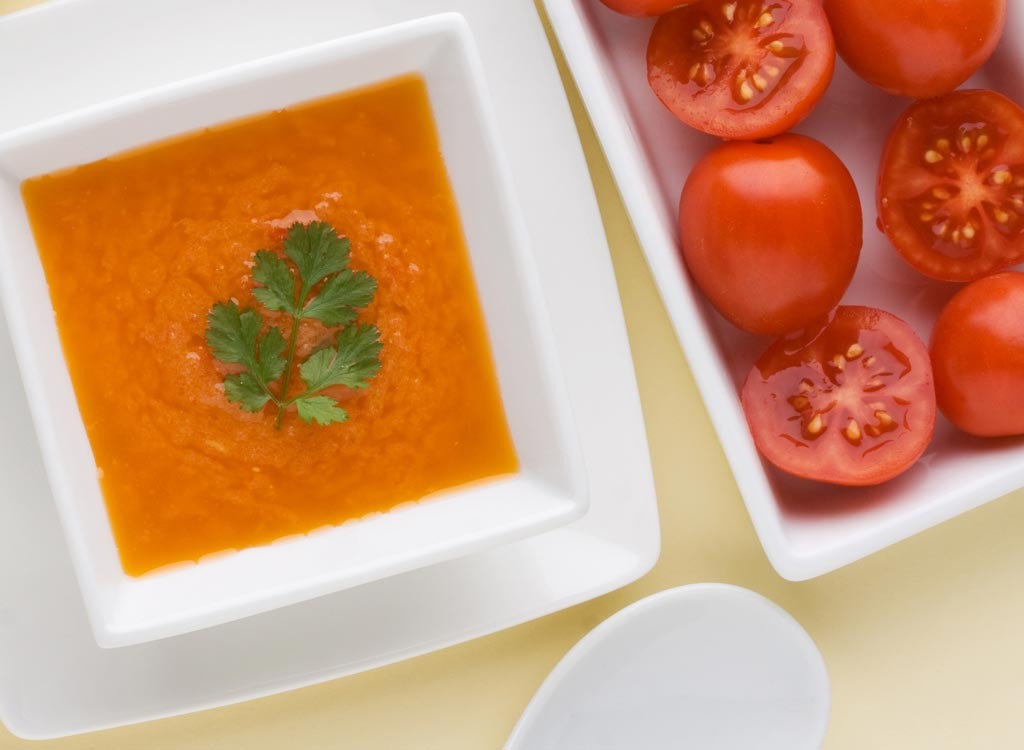 Whether you're serving up a steak and spinach salad or one made solely from beans, you'll love how your produce tastes smothered in a savory and bold tomato vinaigrette. Combine a spoonful of pasta sauce with a 1/4 cup of red wine vinegar, 1/2 cup olive oil, basil, salt, and pepper in a bowl. Whisk everything together and drizzle over your meal of choice.

The only thing better than pizza night? One that helps you use up your leftover sauce. All you need to make these cute mini veggie pizzas is Ezekiel English muffins, leftover jarred tomato sauce, chopped veggies, and mozzarella cheese. After you top the muffins with whatever sauce you've got left, pile on the veggies and cheese and pop 'em in the oven for 10 minutes at 375°F. While they're baking, combine the leftover veggies with some greens and dressing to make a filling and nutritious side salad to complement your mini pizzas.

While there are a million versions of meatloaf, you can make our simple go-to as long as you have 1/2 cup of pasta sauce hiding out in your fridge. Add it to a bowl along with 2.5 pounds of lean, grass-fed ground beef, 1/2 cup of seasoned dry breadcrumbs, 1 egg, and 1/4 cup of chopped onion. Mix everything together with your hands and form into a loaf in a greased 8×8 baking dish. Top with a few more hearty spoonfuls of sauce and bake at 350°F for an hour or until the middle is no longer pink. 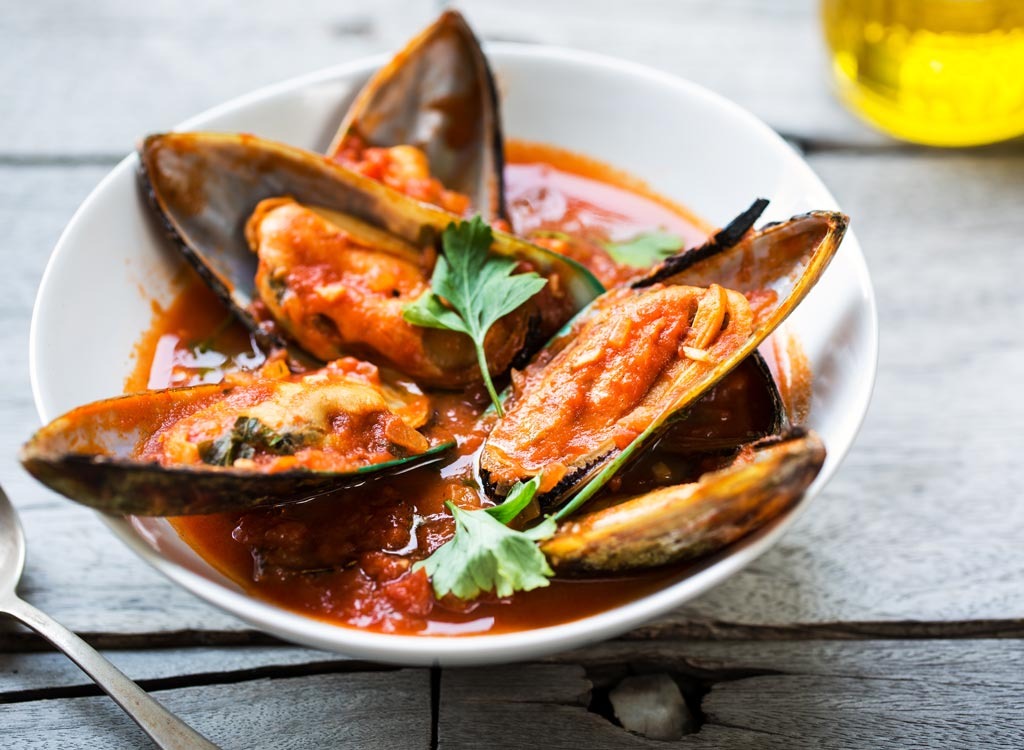 This protein-rich Italian recipe will warm you from the inside out. Start by sauteing some minced garlic in olive oil in a deep skillet. Then, add a small pinch of saffron, 1/4 cup white wine, 1 cup of tomato sauce, and 1.5 pounds of muscles. Cover the pot and cook for about 5 minutes or until the mussels open. Yum! 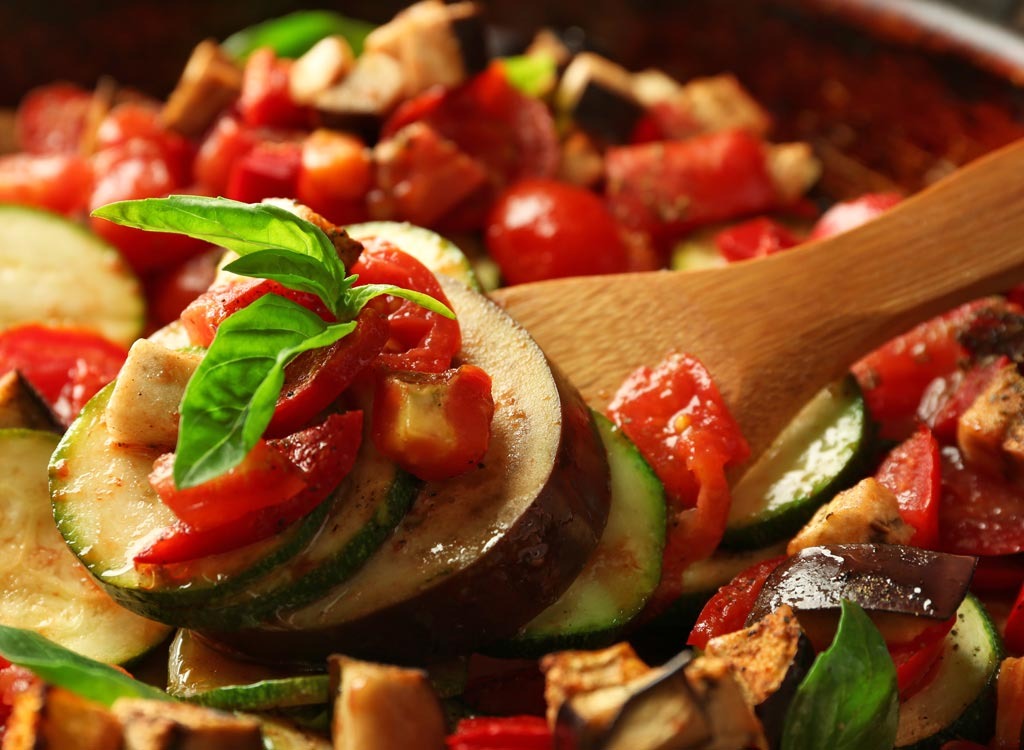 If the only ratatouille you're familiar with is the movie about the rat who longs to be a great chef, you're totally missing out. Packed with veggies and flavor to boot, there's nothing not to love about this classic, marinara-smothered dish. To make it at home, saute some garlic, chopped bell peppers, eggplant, onion, yellow squash, and zucchini in olive oil. Add one cup of sauce and a ½ cup of water to the pan, along with some fresh basil. Allow the mixture to simmer until tender before digging in. 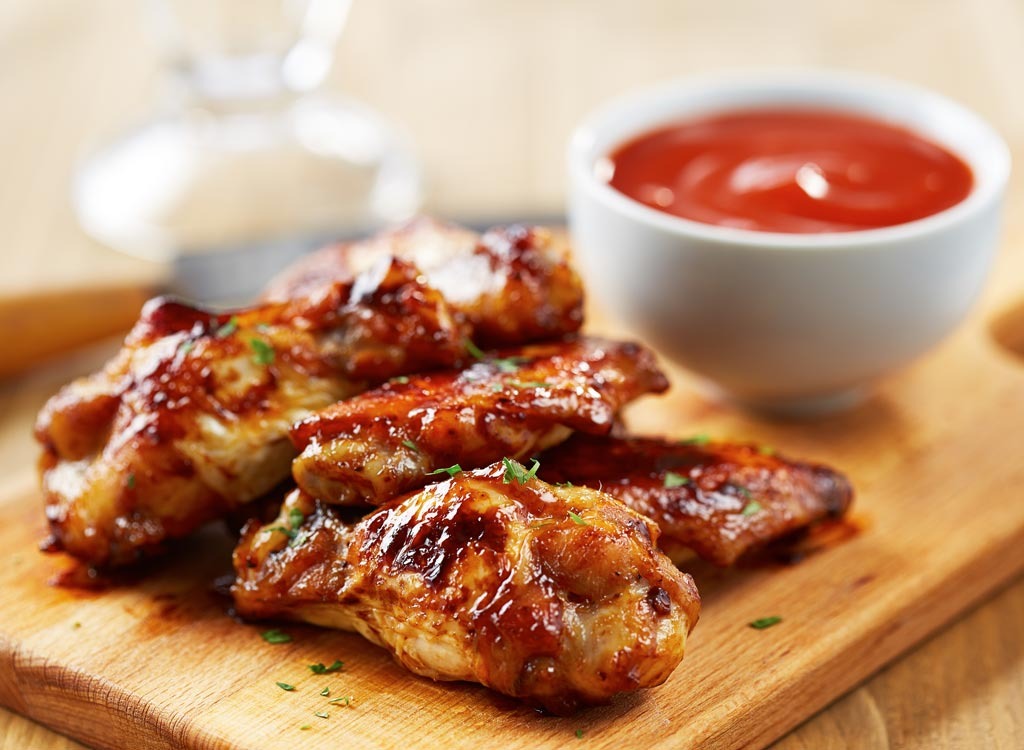 Shake things up this game day—and use up your leftover pasta sauce—with a new Buffalo wing recipe. In a medium or large bowl, combine equal parts marinara and hot sauce and then coat the chicken wings in the mixture. Bake at 425°F for 40 minutes to create an app that's cooked to perfection. 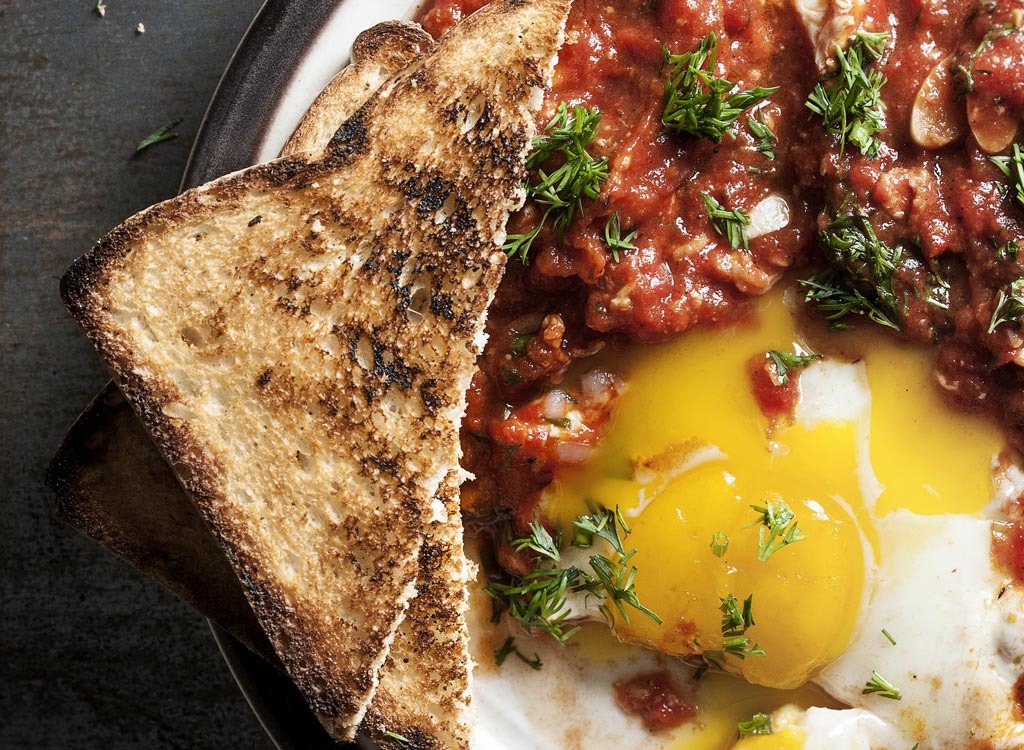 Along with some mouthwatering spicy, creamy, and salty flavors, you'll find protein, good carbs, a bit of healthy fat in this dish, too. To make this a.m. hangover helper, simmer 2 cups of pasta sauce (or 1 1/2 cups of sauce with 1/2 cup of water) in a small skillet, along with a clove of minced garlic, red pepper flakes, salt, and black pepper to taste. Crack in 2 eggs, cover and cook until the whites set. Top with grated parmesan cheese and enjoy!

Running low on salsa for your dinnertime fiesta? Your leftover pasta sauce can come to the rescue! Mix a cup of marinara with a dash of hot sauce, 2 tablespoons of lime juice, corn kernels, black beans, chopped cilantro, and diced red onion. And voila! You've got a bowl filled with instant salsa.

Traditionally made with heavy cream and white pasta, penne a la vodka isn't exactly a dish dieters are eating without abandon. But with a few smart swaps, it's totally possible to indulge without undoing a week's worth of healthy eating. To make a skinny version of the classic recipe, simmer a ¼ cup of Greek yogurt and 1.5 cups pasta sauce in a skillet for 5 minutes over a low flame. (Beware: The yogurt will curdle if you turn the flame up too high.) Remove from the heat and stir in a ¾ tablespoon of vodka and then toss with spiralized veggies. We like carrots and zucchini ribbons best, but any veggie is fair game.

Forgot to pick up cocktail sauce for your shrimp cocktail? Head to the fridge and pull out your leftover tomato sauce. When combined with a bit of horseradish (taste it until you've reached the desired taste), it creates a killer stand in. 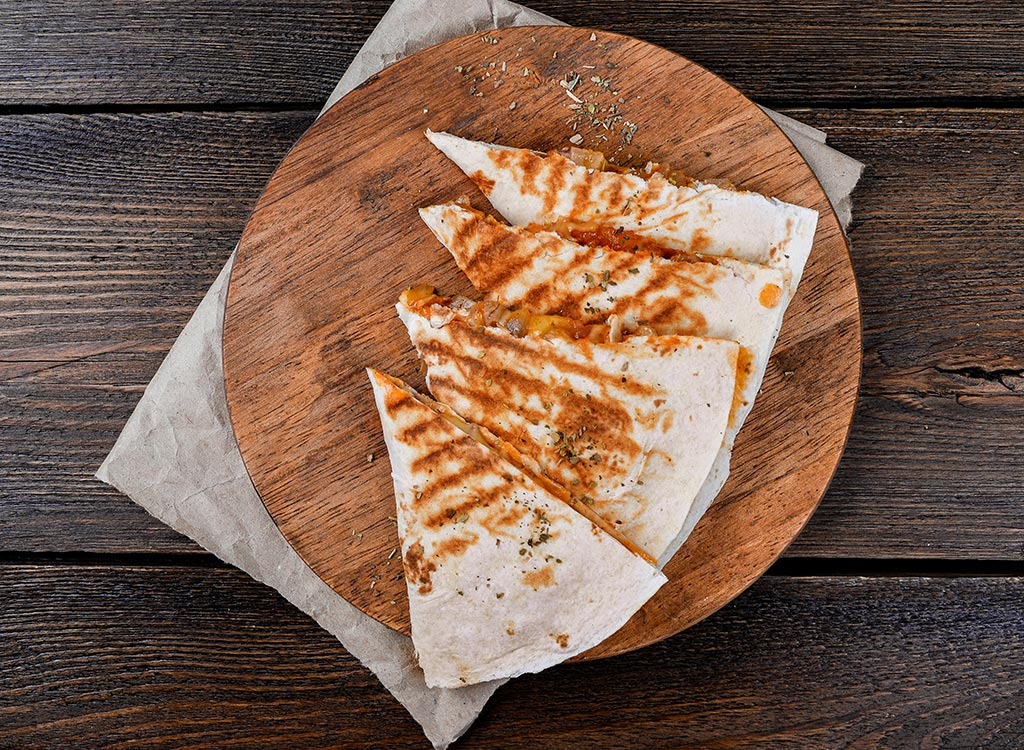 If a slice of pizza and a quesadilla were to fall madly in love and have a baby, it would be this savory and sweet Italian quesadilla. To make one at home, spread some of your leftover spaghetti sauce on a medium whole grain tortilla. Then, top with mozzarella cheese and veggies, fold it in half and then pan-fry until golden brown and the cheese is melted.6254a4d1642c605c54bf1cab17d50f1e 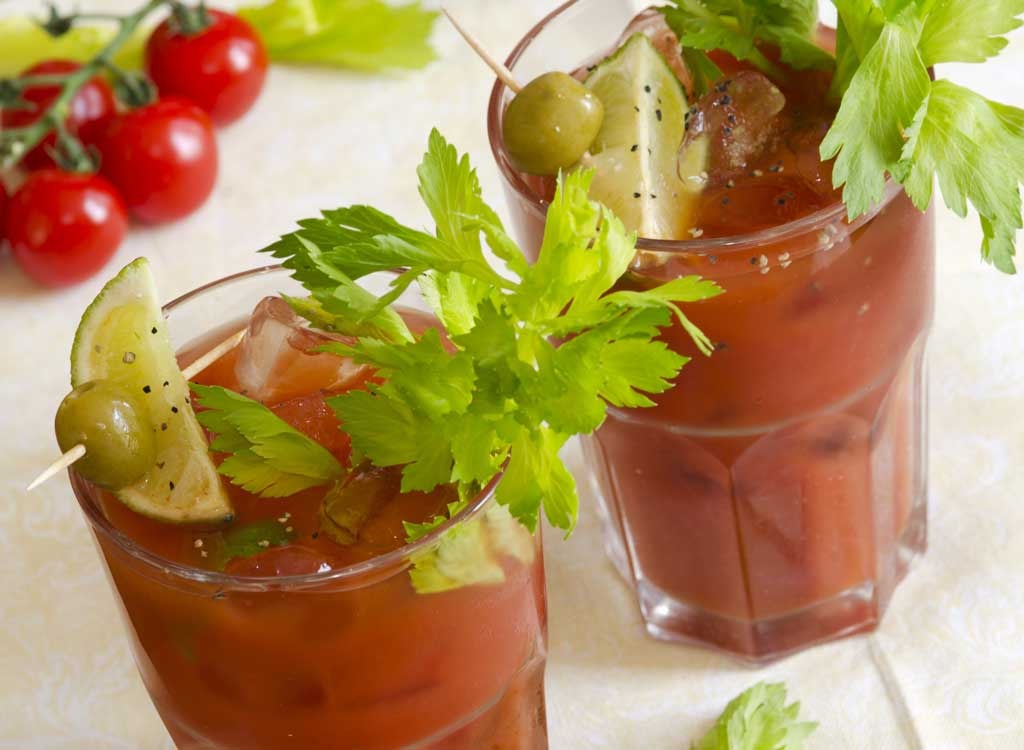 While most people don't think "bloody mary" when they see a jar of marinara, you can score yourself a tasty weekend morning weekend pick-me-up. (Just don't try this with the meat varieties.) Mix 1.5 to 3 ounces of vodka (that's 1 or 2 shots) with a ½ cup of pasta sauce, a ¼ cup of water, 3 tablespoons of lime juice, and a ½ tablespoon of horseradish. If you're feeling extra fancy, top your glass with a celery stalk, Worcestershire, and hot sauce. You'll find some of our top hot and spicy picks in our special report, best and worst hot sauces—ranked! 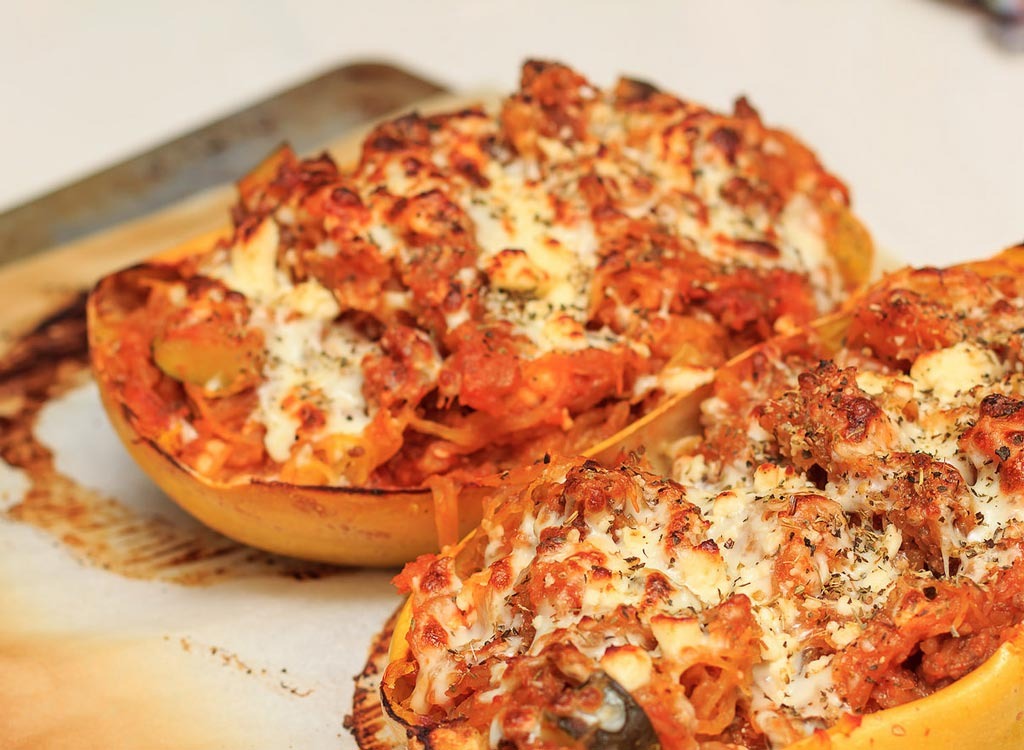 If you love the idea of low-carb zoodles but aren't too crazy about spending time transforming the veggie into ribbons, spaghetti squash is about to be your new BFF. Once you cut the squash in half, remove the seeds, drizzle with a bit of EVOO, and roasted in the oven, the inside takes on a stringy consistency. To get the 4-1-1 on how to make this ricotta enhanced rendition perfect for lasagna fans, click on over to SkinnyTaste.com. 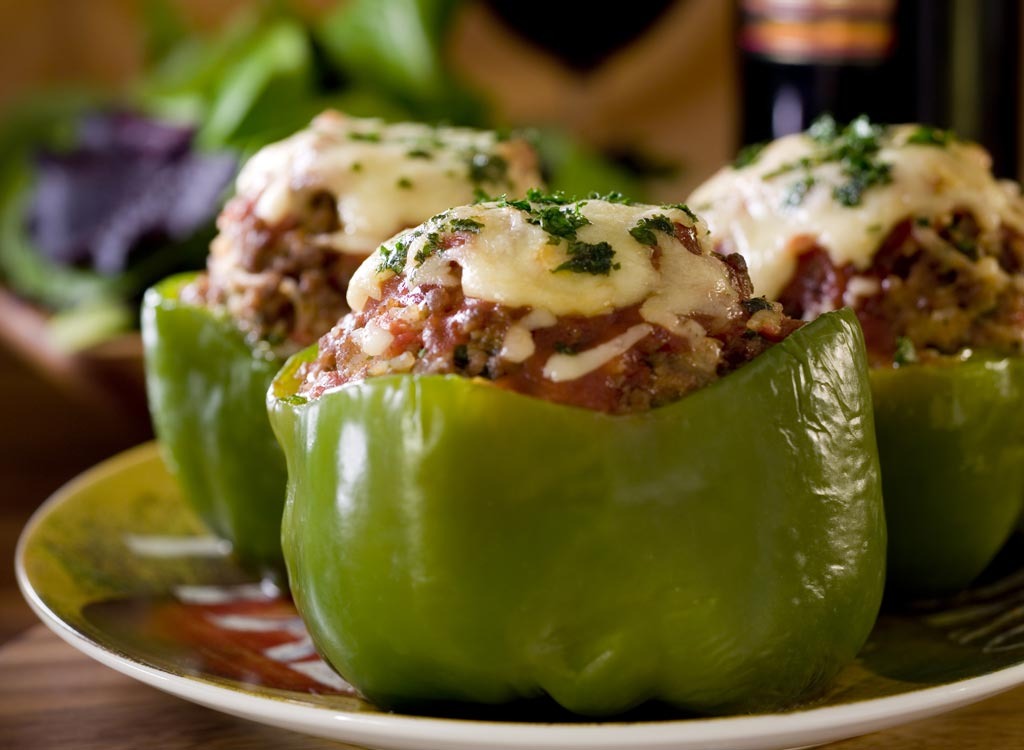 When you have a bunch of odds and ends lying around the kitchen, making a batch of stuffed peppers is an easy way to combine them together to create a new, delicious meal. Dig through your fridge for cooked quinoa or rice, cooked veggies, marinara, and cheese. Once you've found all of your leftover goodies, cut the top off a bell pepper, remove the seeds, and fill it with a bit of everything. Top the pepper off with a bit of extra cheese and pop it into a 350°F oven until the cheese becomes gooey and brown. 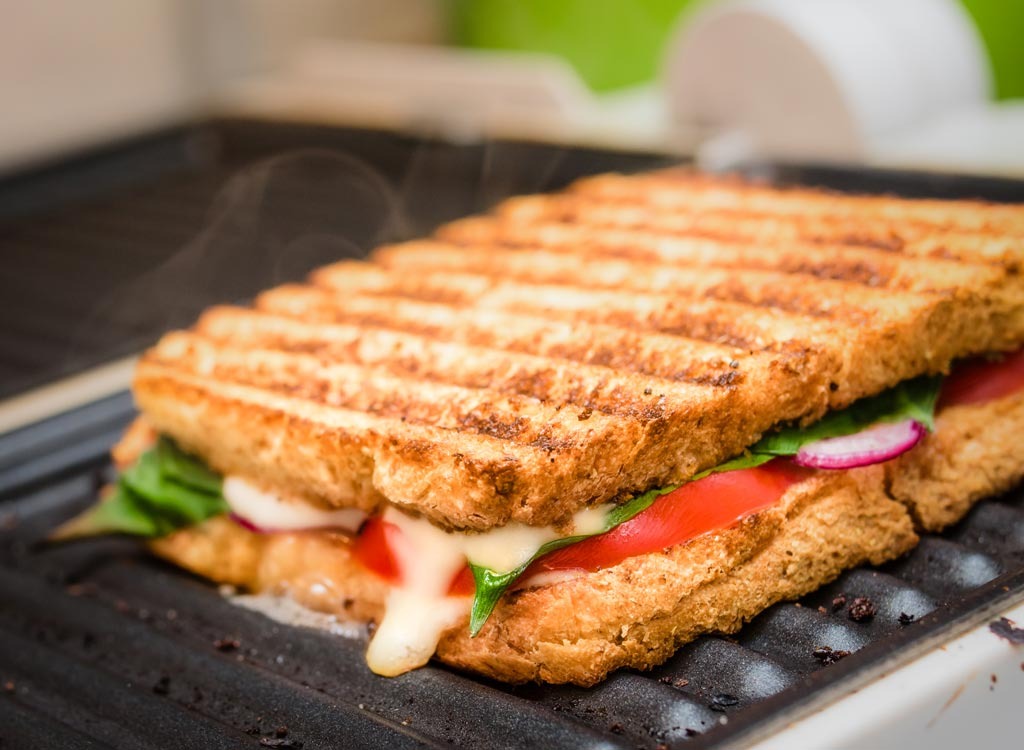 Upgrade a typical grilled cheese with grown up ingredients for a panini-esque creation that's all your own. Spread a layer of leftover spaghetti sauce on a slice of sprouted whole grain bread, layer on your favorite cheese, tomatoes, spinach, and mushrooms. Top things off with another slice of bread and toast in a skillet until the bread is brown and the cheese begins to melt.