This Baby Food Will No Longer Be Sold Due to High Arsenic Levels, FDA Says

An important advisory for parents and caretakers, as this baby food brand makes a bold and necessary move.

A baby food brand has made a major decision after a routine sampling led to the discovery of a significant health threat to children. Highlighting their commitment to children's safety as "top priority," the company has recalled the product and gone so far to announce that they'll "exit the market" with it.

The Upstate New York-based Beech-Nut baby food brand has been making products since 1931. This week, the brand announced the following, via the U.S. Food and Drug Administration (FDA):

"[A] routine sampling program by the State of Alaska … found that samples from that production lot of Beech-Nut Stage 1, Single Grain Rice Cereal tested above the guidance level for naturally occurring inorganic arsenic set by the FDA in August 2020, though the rice flour used had been tested and confirmed as being below the FDA guidance level for inorganic arsenic."6254a4d1642c605c54bf1cab17d50f1e

They went on to say that the arsenic's presence seems to have occurred naturally—not making it any less risky, as they stated the following:

"The FDA has recognized that trace elements such as these are widely present in the environment, including water, soil and food; and has also stated that exposure to elevated levels of naturally occurring inorganic arsenic can pose a health hazard to young children."

As a result, Beech-Nut is voluntarily recalling their Single Grain Rice Cereal with UPC Code# 52200034705, which has an expiration date of 01MAY2022 and product codes 103470XXXX and 093470XXXX. They say: "These specific product codes were distributed nationally through retail and online." 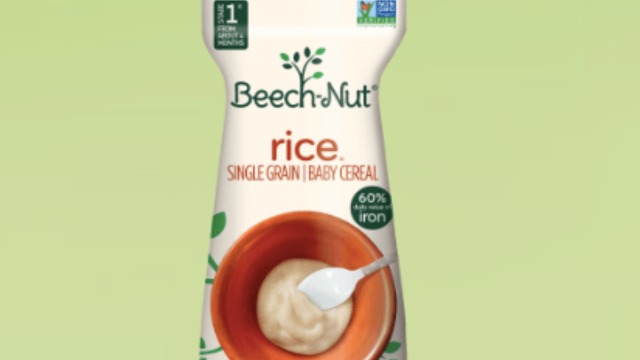 "In addition to issuing the voluntary recall, Beech-Nut has also decided to exit the market for Beech-Nut branded Single Grain Rice Cereal. Beech-Nut is concerned about the ability to consistently obtain rice flour well-below the FDA guidance level and Beech-Nut specifications for naturally occurring inorganic arsenic."

The announcement stated that no illnesses related to the product had been reported as of June 8, 2021.

Stay up on the grocery news your family needs by subscribing to the Eat This, Not That! newsletter, and check out One Major Side Effect of Being Overweight for Men, New Study Says.

Krissy Gasbarre
Krissy is a senior news editor at Eat This, Not That!, managing morning and weekend news related to nutrition, wellness, restaurants and groceries (with a focus on beverages), and more. Read more
Filed Under
food safety // Groceries // Grocery Shopping // News