What Happens to Your Body When You Have Sex, Says Science

Here's how being intimate benefits your brain, your skin, your heart, and more.

While there are certainly some exceptions, most people likely don't need to be convinced why having sex might be something worth doing. But the fact is, besides being pleasurable for its own sake, a healthy sex life also can provide a number of physical and mental benefits that makes it not only just fun, but also really, really good for you.

From lowering one's blood pressure to helping a person sleep better to even reducing the risk of cancer, research has found a wide range of positive side effects that result from regular rolls in the hay. Here are a few of the things that happen to your body when you have sex. And for more on the connection between your sex life and a healthier life, see here for The Sex Position That Secretly Helps You Sleep Better, Says New Study.

Your Heart Gets a Boost

When it comes down to it, sex is a form of exercise and like any other physical activity, and it's terrific for your heart. For example, a study published in the American Journal of Cardiology in January 2015 found that men who had sex two times a week (or more) lowered their risk of cardiovascular disease compared to those who had sex just once a month or less.

In the case of women, research published in the Journal of Health and Social Behavior found that sexually active women have a lower risk of "cardiac events" later in life. But, unlike many earlier studies, it did find an increased risk in of cardiac events in older men with a high level of sexual activity.

The fact is, according to researchers at Harvard Medical School, sex rarely raises the heart rate for men above 130 beats a minute, "which is about the same as doing the foxtrot, raking leaves, or playing ping pong." And for more news that pertains to the bedroom, know that If You Have This Body Shape, People Think You Crave More Sex, Says Study.

Your Skin Starts to Glow

That "morning-after glow" isn't just in your head. Dermatologists have found that sex can actually help provide you with healthier skin. Melissa Piliang, M.D., a dermatologist at Cleveland Clinic explained to Business Insider: "Like other forms of exercise, sex increases blood flow to the skin, which will give you a brighter complexion." 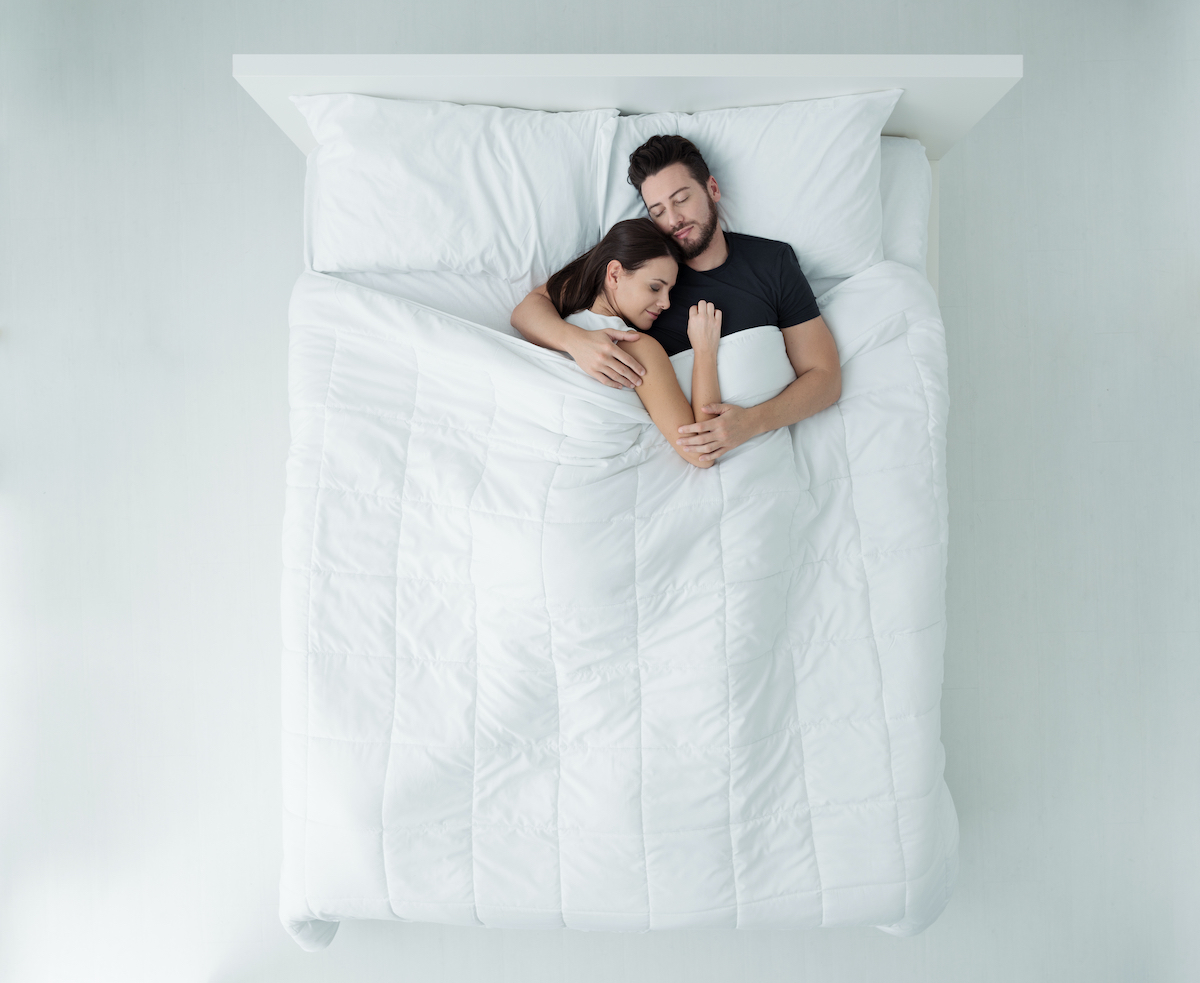 Anyone who's fallen into a deep, satisfying sleep after sex will not be surprised to hear that sex has been found to aid one's slumber. Researchers at CQ University in Adelaide, Australia found that more than 60 percent of both the men and women studied found that their sleep improved after having an orgasm with their partner. A 2016 review of research at the University of Ottawa suggested that sex before sleep can "decrease stress, and can assist female insomniacs by helping to initiate and maintain sleep."

As Amer Khan, MD, a neurologist and sleep specialist, explained to Healthline, sex can result in the release of a number of chemicals that help with sleep. "Hormones, such as dopamine, prolactin, and progesterone, have been implicated in affecting the mind with a sense of relief, relaxation, and sleepiness following the act of satisfactory sex," Kahn said. And for at least one way to try and sleep better starting tonight, make sure you're aware of The Easy Trick for "Falling Asleep in 5 Minutes" That's Going Viral.

A healthy sex life has been found to significantly lower a person's level of stress and improve their mood. A 2019 study published in Psychosomatic Medicine found that expressions of intimacy (both sexual and not) helped speed recovery from stress in both men and women.

The researchers suggested that may be because triggers the release of hormones such as oxytocin and endorphins.

Your Immune System Gets a Boost

A study published in Psychological Reports found that regular sex (an average of once or twice a week) increased one's production of the immunoglobin—which is responsible for producing white blood cells, and aiding the immune system. But it should be noted that the same study looked at people who had sex with even more frequency but did not find a correspondingly higher level of immunoglobin production.6254a4d1642c605c54bf1cab17d50f1e

Researchers found that you may not even need a partner for orgasm to provide a modest boost to your immune system. A study published in Neuroimmunomodulation found that following orgasm, the male subjects experienced an increase in white blood cells.

Your Feelings of Pain Get Diminished

"Orgasm can block pain," according to Barry R. Komisaruk, PhD, a distinguished service professor at Rutgers University, who explained to WebMD that sex has been found to release the endorphins that helps raise one's pain tolerance. "We've found that vaginal stimulation can block chronic back and leg pain, and many women have told us that genital self-stimulation can reduce menstrual cramps, arthritic pain, and in some cases even headache."

Orgasm may not be necessary to enjoy these benefits—mere intimacy can make an impact. As writers at the Mayo Clinic explain: "Intimacy can actually make you feel better. The body's natural painkillers, called endorphins, are released during touch and sex. And the closeness you feel during lovemaking can help you feel stronger and better able to cope with your chronic pain."

Your Risk of Prostate Cancer May Drop

Frequent sexual activity has been found to help reduce the risk of prostate cancer in men. Drawing on the Health Professionals Follow-Up Study, which tracked the behavior and health of more than 29,000 men in healthcare fields, a 2016 report in the journal European Urology found a compelling correlation between frequent ejaculation and lower risk of prostate cancer. According to the findings, men who ejaculate more than 21 times per month were about 20 percent less likely to develop prostate cancer than those who ejaculated just four to seven times in the same period.

"While our findings should be confirmed in studies that evaluate the potential biological mechanisms underlying the observed associations, the results of our study suggest that ejaculation and safe sexual activity throughout adulthood could be a beneficial strategy for reducing the risk of prostate cancer," Jennifer Rider, the study's lead author, said at the time.

This followed a 2003 study of 2,300 men by Australian researchers which found that those who ejaculated five to seven times a week were 36 percent less likely to develop prostate cancer than those who ejaculated fewer than twice a week. And for more news from the front lines of sex and science, see why Older Women Who Do This Have Worse Sex, Says New Study.