13 Pumpkin Beers To Try Before They're Gone

You’re going to fall for these spooky, delightful beers this season.

When you think of fall, you might think of flannels, apple picking, and eating a vast amount of delicious pumpkin spice foods and drinks. It's also Oktoberfest (which begins in September despite its name), and the season wouldn't be complete without a tasty seasonal beer. Pumpkin beer only comes around once a year, so it's important to know which ones are worth buying.

Whether you're drinking it straight from the bottle, pouring it into a frothy glass, or adding your own cinnamon sugar rim, you deserve to sit back, relax, and enjoy the tastes of fall, one sip at a time. That's why we've come up with 13 pumpkin beers you need to try in 2022. Check them out, and if you still can't get your pumpkin fix, try pairing them with the 16 Best Pumpkin Spice Foods You Can Buy Right Now.

Oh my gourd, you're going to love the Good Gourd beer from Cigar City Brewing! Savor the taste of pumpkin brewed with cinnamon, allspice, cloves, nutmeg, and vanilla. If it sounds like pumpkin pie in a can, that's because it basically is—right down to the buttery smell and deep orange hue.

You'll be back for seconds when you get a taste of this seasonal favorite from Saint Arnold's. Scoring a world-class rating of 95 on Beer Advocate, Pumpkinator is a dark beer full of spice and flavor. A bold and full-bodied imperial stout, it's brewed with a combination of hops, pumpkin, molasses, brown sugar, and spices, then dry-spiced. A single batch is released every year around October 15th and is available on draft and by the bottle—get it while you can!

If you're looking for a beer that epitomizes the Halloween spirit, look no further than Night Owl, a medium-bodied, highly drinkable ale that is lightly bittered with Magnum hops. Brewed with pumpkin puree and juice, it is spiced in conditioning (aka, the process through which beer is carbonated) with ginger, cinnamon, nutmeg, cloves, and allspice. Roasted and raw pumpkin seeds are infused throughout the process, from mashing to fermentation, for a pumpkin flavor that runs deep.

A rich amber ale that almost sounds like something you might order at Starbucks, the Vanilla Cappuccino Pumpkin Ale combines a series of complementary flavors in one can. It is conditioned using the Buffalo-based brewery's signature blend of spices, vanilla, and locally roasted coffee for a satisfying malty-sweetness. If only our morning PSL came in a seven percent ABV option!

Allagash takes Halloween seriously when creating the Ghoulschip beer. How seriously? "On All Hallows' Eve itself, we send the beer to rest among the specters in our Coolship, where it collects wild microflora from the chill Maine air," the product description reads, continuing, "The beer then ferments in a stainless tank on our house yeast before heading into oak barrels, where it sits in waiting for up to three years."

Allagash began brewing their pumpkin beer back in 2008, and they seem to have perfected the formula thanks to a "monster mash" that includes shredded Maine pumpkin and toasted pumpkin seeds.

In a review on Beer Advocate, user Ryan1788a5 from Massachusetts writes: "Rich and sweet brown molasses flavors balance, especially on the finish. Super unique, lovely, and interesting. Hidden gem," adding, "Don't think of it as a pumpkin beer."

You may have had Schlafly's Oktoberfest lager, but this limited-release fan-favorite is worth a sip (or a bunch of sips) too. It's fermented in pounds of fresh pumpkin squash and a brewer's blend of wort and sugar, then filtered through a spiced infusion of cinnamon, clove, and nutmeg. The end result is a brew that's got just the right amount of pumpkin flavor. It's sweet and warm and all the things you're looking for as the days get crisper. According to Schlafly's website, this Pumpkin Ale pairs well with foods like butternut squash ravioli, cranberry goat cheese, or cheesecake. We'll have one of each, please.

If you're struggling to get into the Halloween spirit, Ichabod Pumpkin Ale is sure to help put you in a spooky mood.

Tipping its hat to the Legend of Sleepy Hollow, this pumpkin ale combines malted barley and real pumpkin with cinnamon and nutmeg. At 4.5 ABV, it's the perfect companion for a night of trading ghost stories by the campfire or bingeing scary movies. Boo! 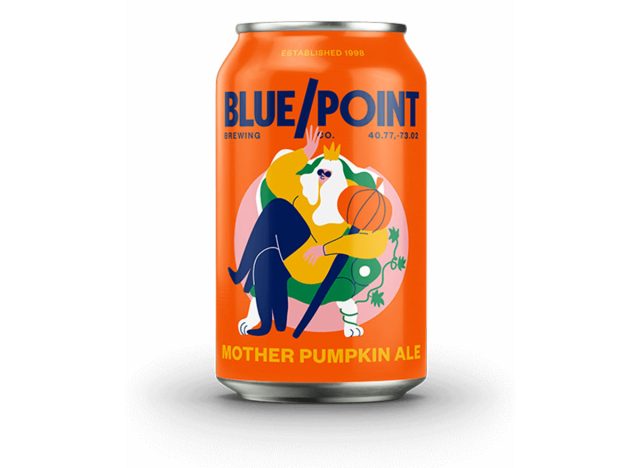 Mother Pumpkin Ale is one of Blue Point's fastest-selling brews of the year—and for good reason. It's a golden pumpkin ale that has all the fall ingredients: cinnamon, nutmeg, ginger, and allspice. The brewery describes Mother Pumpkin's final flavor as "roasty," and we frankly can't think of a better adjective. One bad mother, indeed.6254a4d1642c605c54bf1cab17d50f1e

Prepare your tastebuds for this Pumpkin Cheesecake Cream Ale. It's a dessert beer that marries sweet and tangy notes of cream cheese with hints of graham cracker crust. On the finish, expect notes of the traditional pumpkin pie spices of cinnamon, clove, and nutmeg. The Missouri-based wholesale brewer also offers a range of other pumpkin beers including the original Pumpkin Ale, Pumpkin Seed Oktoberfest lager, Vanilla Pumpkin Beer, Salted Caramel, and Chai Pumpkin.

Two Roads released this beer back in August but it has fall written all over it. Self-described as "scary good," RoadsMary's Baby—a nod to the classic Halloween movie and the brewery's name—is a traditional pumpkin ale with a unique twist. It's aged in rum barrels with vanilla beans, which adds complexity and depth. The result? A smooth ale with notes of pumpkin, spices, vanilla, oak, and, naturally, a touch of rum.

If the rich amber color and sweet and savory aroma don't entice you, Spooky Tooth's creamy mouthfeel will. This smooth brew boasts flavors of pumpkin, then transitions into a sweet malt with pie crust, spices, and hints of brown sugar, all topped off with a clean finish.

Dare we say that Pumking is the king of pumpkin beers? The aroma of pumpkin, pie spices, buttery crust, vanilla, and roasted pecans match the flavors of malty vanilla, clove, allspice, cinnamon, nutmeg, and pie crust. Judging from the more than 7,000 reviews on Beer Advocate, it is an extremely popular selection while it's available, from August to October.

"One of the beers I look forward to the most during this season," says Cdriver0414 in their review. "The look of the beer is what you would typically expect from the style. The nose on this beer is one of the best in a pumpkin beer. It's vanilla, cinnamon, nutmeg, pumpkin pie, and an earthy maltiness. The flavors just explode as you drink it. The higher alcohol by volume helps bring out these flavors. If you haven't had this one, get it. You won't regret it."

They're not wrong about the higher ABV; Pumking clocks in at 8.6 percent.

If you can't make it to the pumpkin patch this year, sipping on this is the next best thing. Rogue's Pumpkin Patch Ale screams fall, and much dedication and time go into making it. The beer is made with whole pumpkins, which are chopped and roasted by hand. This hand-roasting technique allows the natural sugars to caramelize in a very specific way, which, when combined with a light balance of spices, gives this ale its unmistakable signature flavor.

Kayla Garritano
Kayla Garritano is a Staff Writer for Eat This, Not That! She graduated from Hofstra University, where she majored in Journalism and double minored in Marketing and Creative Writing. Read more about Kayla
Filed Under
Alcoholic Drinks // Beer // Drinks