There's nothing better than opening up a new bag of potato chips and taking that first, heavenly bite—especially if you're feeding an intense salt craving.

But every dieter knows that downing a bag of greasy (read: fattening) sodium-filled chips isn't a good call. Doing so will lead to dehydration, which can increase hunger and derail your hard-earned weight loss wins. What's more, extremely salty foods—like chips—can cause water retention, so they'll leave you looking paunchier than you are. But just because chips are a no-go doesn't mean you can't satisfy your urge for a salty snack. There are plenty of healthy, savory snacks that can quell your craving without skyrocketing your blood pressure or expanding your waistline.

All the snacks below are far more nutrient-dense than a bag of chips and have no more than 180 calories per serving. Read on to find out how they each stack up against a typical snack bag:

These dried chickpeas are downright addictive. They have the crunchiness of a chip, but lucky for you, carry far fewer calories and less fat and sodium. Plus, they're filled with two of the most satiating nutrients on the block: fiber and protein. Keep a bag of the stuff in your desk; noshing on them will help you stay away from the vending machine next time a salty snack attack strikes.

This salty gluten-free snack features quinoa flour, brown rice flour and pea protein concentrate (it's easier to digest than other protein alternatives like whey), which ups its protein count beyond that of the competition. It also uses far less oil, which help keeps your hands grease-free and maintain your flat stomach.

This Asian-inspired jerky is lower in fat and sodium than conventional varieties and is also free of monosodium glutamate (MSG), a scary additive that increases appetite. If you're looking to fill up without filling out, make this your go-to. An 80-calorie serving has a whopping 13 grams of protein, a nutrient that's been shown to keep hunger at bay and help the body build more muscle mass, giving you that lean look you crave. 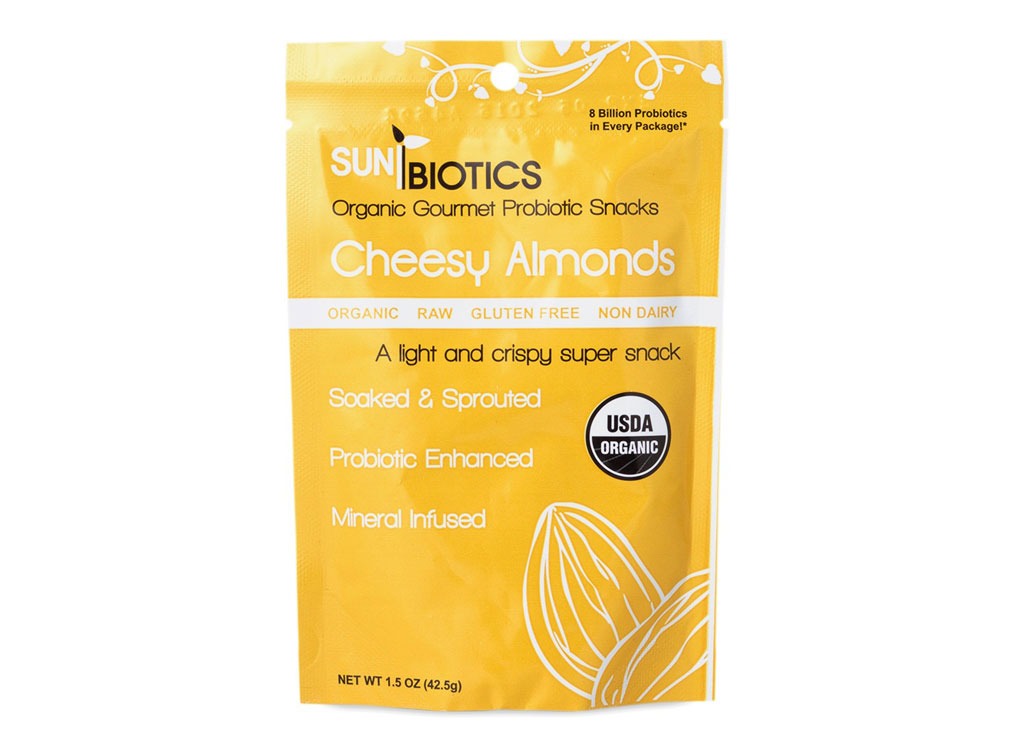 If you're sick of noshing on traditional nuts, these probiotic (a healthy bacteria that fuels weight loss) enhanced nuts should be a welcome addition to your snack drawer. They get their cheesy flavor from a sprinkling of sea salt and nutritional yeast—an inactive yeast made from beet molasses and sugarcane—which keeps the calorie count low and the nutritional profile robust. Grab a small handful as a pre-workout snack. Researchers say the nut's L-arginine content can actually up carb and fat burn during workouts.6254a4d1642c605c54bf1cab17d50f1e

Like olive oil, olives are filled with healthy monounsaturated fats that boost heart health and ward off hunger. With just 50 calories for an entire to-go pack, you can't go wrong with Milas Oloves' savory, citrus- and herb-infused snack. Though they're sold at a number of health food stores, most Starbucks locations recently started carrying them (along with some other new healthy snacks), so they're easy to find in a pinch.

While eating something made of dehydrated squash may not seem like it would be too tasty, this snack is actually beyond satisfying. Its oniony, garlicky flavor rivals that of a sour cream and onion chip. The primary difference between the two snacks? Downing half of bag of Just Pure Foods' creation won't damage to your waistline.

To the untrained eye, any bag of pita chips likely seems healthier than a bag of Ruffles, but that's simply not the case. Many brands dip their pita bread into vats of oil and then roll it in tons of salt, making their snacks just as sabotaging as a bag of chips. We're fans of Kashi's whole-grain chips because they're light in sodium and fat—but don't taste like it. Dip them into some protein- and fiber-filled hummus to boost the satiety factor even further.

Though you may not think of cheese as a snack that will crush a salt craving, the calcium-rich treat provides a fair amount of sodium. We like Organic Valley Stringles because they're exceptionally creamy, light in sodium, easy to eat on the run and made with hormone- and antibiotic-free organic milk.

If you like to graze while you watch TV, air-popped popcorn should be your go-to because you can eat a ton of it without breaking the calorie bank—which you're bound to do when you're tuned into the latest episode of Silicon Valley. This crunchy snack offers a hit of hunger-banishing fiber from the whole grains and carries just 4 grams of fat. Better yet, it's made with just three ingredients: popcorn, sunflower oil and sea salt—something chemical-laced microwave popcorn can't claim.

Unlike chips, pistachios are nearly impossible to overeat in one sitting. In a study of 140 university students, one group of participants was given in-shell pistachios while the other group was given shelled nuts. The researchers found that participants noshing on shelled pistachios consumed a whopping 41 percent more calories that those who had to remove the shells themselves. The authors say that the slowed eating time associated with the shell removal likely contributed to the smaller food intake because it allowed participants time to register that they had eaten their fill.

WITH OUR BEST-SELLING NEW DIET PLAN, The 7-Day Flat-Belly Tea Cleanse! Test panelists lost up to 4 inches from their waist! Available now in paperback!