The science is in: Certain foods can be your best allies in battling the bulge.

Whether it's turning off fat genes, revving your metabolism and ability to burn fat, or helping you feel fuller longer and consume fewer calories, these foods have been proven to show an increased rate of fat loss.

A handful of almonds packs a serious fat-burning punch: One study of overweight adults found that eating about a quarter-cup of almonds for 6 months led to a 62% greater reduction in weight and BMI. And eating just 1.5 ounces of almonds daily led to a reduction in belly and leg fat, a 2015 study published in the Journal of the American Heart Association showed. For added effect, eat almonds before working out: The amino acid L-arginine can help you burn more fat and carbs.

The vibrant tubers are called superfoods for good reason: They're packed with nutrients and can help you burn fat. Sweet potatoes are high in fiber and have a low glycemic index, which means they're absorbed slowly and keep you feeling full longer. They're also rich in carotenoids, powerful antioxidants which help stabilize blood sugar levels and lower insulin resistance, which prevents calories from being converted into fat. And their high vitamin profile (including A, C and B6) give you more energy to burn at the gym.

The humble grapefruit, a ghost of breakfasts past, deserves its time in the weight-loss spotlight: A study published in the journal Metabolism found that those who ate grapefruit for six weeks lost a full inch off their waistlines. What's behind the belt-tightening effect? The fruit is rich in phytochemicals, a bioactive compound that burns fat. Talk to your doctor before stocking up on the citrus, though; it can interfere with some medications. 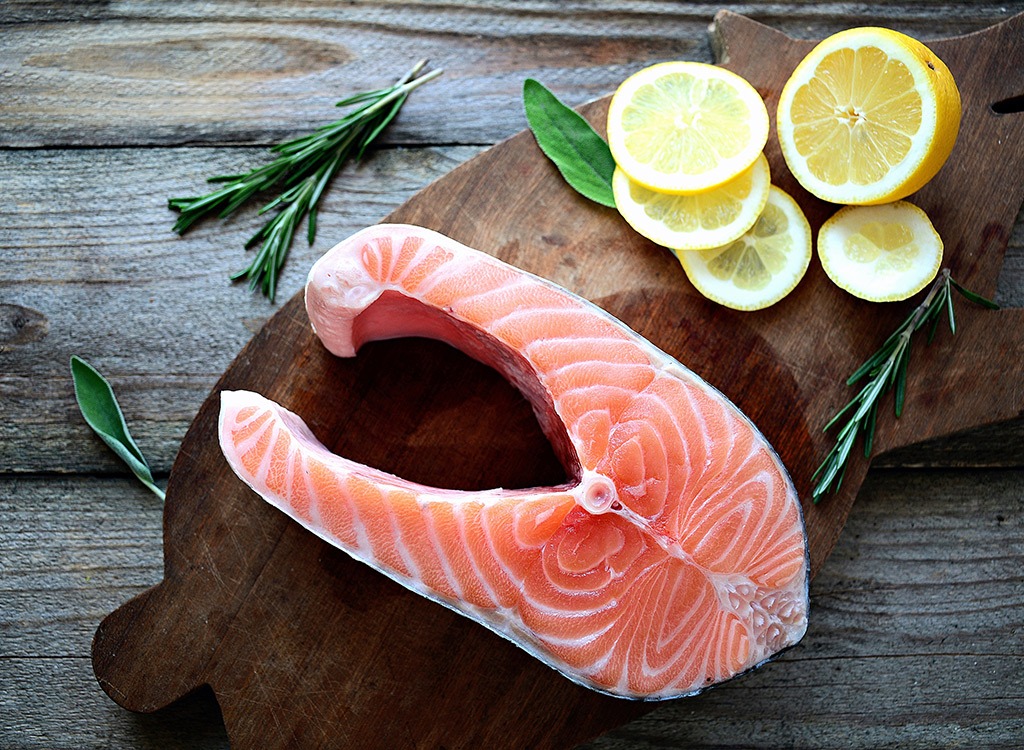 The equation is simple: Protein builds muscle. More muscle = more fat burning. Wild salmon is an excellent place to start, as it's one of the foods that have been shown to turn off your fat genes. The fish is rich source of omega-3 fatty acids, which fuel fat burning and block fat storage. Adding two servings to your diet each week to get the amount of heart-healthy omega-3 fatty acids recommended by the American Heart Association. Just be sure always to choose wild salmon; the farmed variety can contain nasty additives and bad fats. Find out more in the Eat This, Not That exclusive report on 8 Reasons Why You Should Never Order the Salmon.

For morning fuel with a fat-burning bonus, replace coffee with green tea. Exercisers who drank four to five cups of green tea daily and worked out for 25 minutes lost more belly fat than their non-tea-drinking counterparts, a study published in The Journal of Nutrition found. What makes the drink so powerful? It contains catechins, antioxidants that boosts metabolism, speed the release of fat from cells (especially belly fat) and stoke the liver's fat-burning capacity.6254a4d1642c605c54bf1cab17d50f1e

Raspberries, strawberries and blueberries are a dietary triple threat: They're a flavorful way to sate sweet cravings, and they're packed with polyphenols, which can help you burn fat and even stop it from forming. Mice that ate three daily servings of berries had 73 percent fewer fat cells, a Texas Woman's University study found. A study out of University of Michigan showed similar results; rats who had blueberry powder mixed into their meals had less abdominal fat at the end of the 90-day study than rats on a berry-free diet.

A compound in pepper will leave you with a fire in your belly in more ways than one: Capsaicin has proven to burn belly fat, suppress appetite and boost the body's ability to convert food to energy. Daily consumption of capsaicin speeds up abdominal fat loss, a study published in the American Journal of Clinical Nutrition found. And men who ate spicy appetizers consumed 200 fewer calories at later meals than those that did not, a second study by Canadian researchers found. Relax—you don't have scarf jalapeños raw: You can season grilled fish, meats and eggs with a pinch of red chili pepper.

Not all carbs will take up residence around your midsection—in fact, eating whole grains can have the opposite effect. People who ate three or more daily servings of whole grains (such as oats, quinoa and brown rice) had 10% less belly fat than people who ate the same amount of calories from processed white carbs (the white stuff: bread, rice, pasta), according to a Tufts University study. It's theorized that this is due to whole grains' high fiber and slow-burn properties. (The phrase "slow carb" is anything but sluggish when it comes to blasting fat.)

Eat This, Not That!
Inspired by The New York Times best-selling book series, Eat This, Not That! is a brand that's comprised of an award-winning team of journalists and board-certified experts, doctors, nutritionists, chefs, personal trainers, and dietitians who work together to bring you accurate, timely, informative, and actionable content on food, nutrition, dieting, weight loss, health, wellness, and more. Read more about Eat This
Filed Under
Fat Burning Foods // How To Lose Body Fat // How To Lose Weight