Secret Tricks for Getting Better Sleep After 60, Says Science

While children and teens have different sleep recommendations, everyone over the age of 18 has sleep recommendations that are largely identical. In short, whether you're 25 or 65, you should be getting at least seven hours of sleep per night. Of course, that's easier said than done for many people—especially older adults.

According to research published in the Handbook of Clinical Neurology, upwards of 50% of all adults over the age of 60 struggle with persistent sleep disturbances and insomnia. Moreover, a survey put together by the University of Michigan reports that one in three Americans over the age of 65 take something to help them sleep (with one in 12 taking a prescription sleep med). Let's face it: That's not good news.

"Although sleep problems can happen at any age and for many reasons, they can't be cured by taking a pill, either prescription, over-the-counter or herbal, no matter what the ads on TV say," explains poll director Preeti Malani, M.D., a physician at the University of Michigan trained in geriatric medicine. "Some of these medications can create big concerns for older adults, from falls and memory issues to confusion and constipation."

So, what are some healthier ways to promote better sleep in old age? Read on to learn about some secret ways to get better sleep after 60. And for more helpful sleep science, don't miss What Sleeping with the TV on Does to Your Body, Says Science.

Embrace the Sun First Thing in the AM 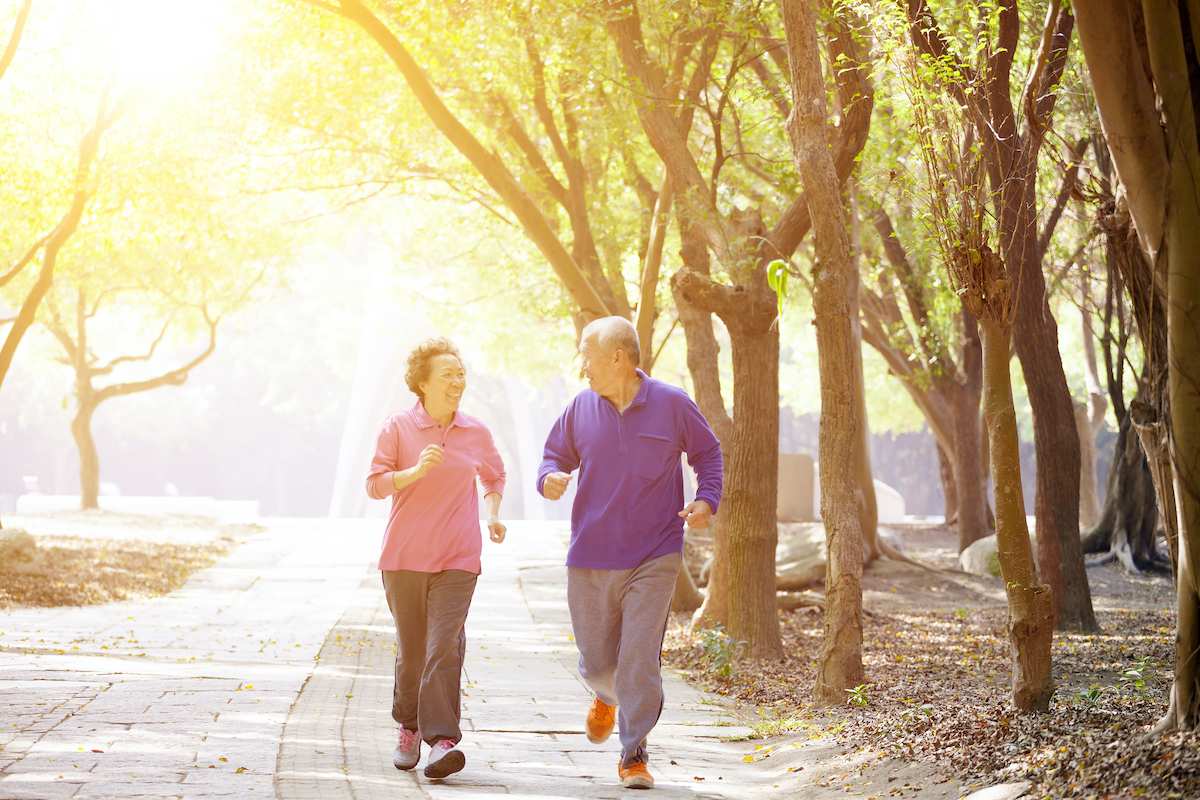 Fact: Taking some time to soak in the sun first thing in the morning—and periodically throughout the day—can help older adults reset their internal body clocks and recalibrate their melatonin levels. You may not notice a difference overnight, but eventually making a habit of getting some sun will make it easier to fall asleep in the evening.

One study published in the journal Holistic Nursing Practice asked a group of older adults (aged 65+) to spend two hours each morning "directly exposed to the sun." After just five consecutive mornings, participants reported a significant improvement in sleep quality.

Similarly, another research project published in the Iranian Journal of Public Health concluded that exposing a group of elderly nursing home patients to just one hour of sunlight in the morning and another hour in the evening (5-6 PM) for a period of six weeks resulted in marked improvements in both insomnia and anxiety symptoms/complaints. Participants' sleep cycles showed big improvements, as well, with subjects becoming sleepy at night and staying alert during the day. And for more great sleep advice, don't miss why It's Worse to Sleep on This Side of Your Body, Says Science.

Practicing strong sleep hygiene is a good idea at any age, but it can be particularly effective for older adults. The term "sleep hygiene" may leave you drawing a blank, but it's just a fancy term for sleep habits. The Sleep Foundation tells us that "strong sleep hygiene means having both a bedroom environment and daily routines that promote consistent, uninterrupted sleep."

So, what can you do to improve your sleep hygiene? "Avoiding daytime naps, maintaining a regular sleep schedule, limiting substances such as caffeinated beverages, nicotine, and alcohol that adversely affect sleep, and exercising at least 6 hours before bedtime can help tremendously," explains Rashmi Byakodi, MD, editor of Best for Nutrition.

Neglecting sleep hygiene may not result in all that much sleep loss during early and mid-adulthood, but what works at 35 isn't going to work at 65 for many. Stephen Light, a Certified Sleep Science Coach and co-owner of Nolah Mattress, even goes so far as to call poor sleep habits the #1 most common cause of irregular sleeping among older adults. He believes it is essential for older adults to set a steady and relaxing pre-bed ritual. "The pre-bedtime routine tells the body that it will sleep soon, triggering drowsiness and grogginess after doing the said activity. In this scenario, sleep becomes more accessible when the mind and body are ready for sleeping," he comments. 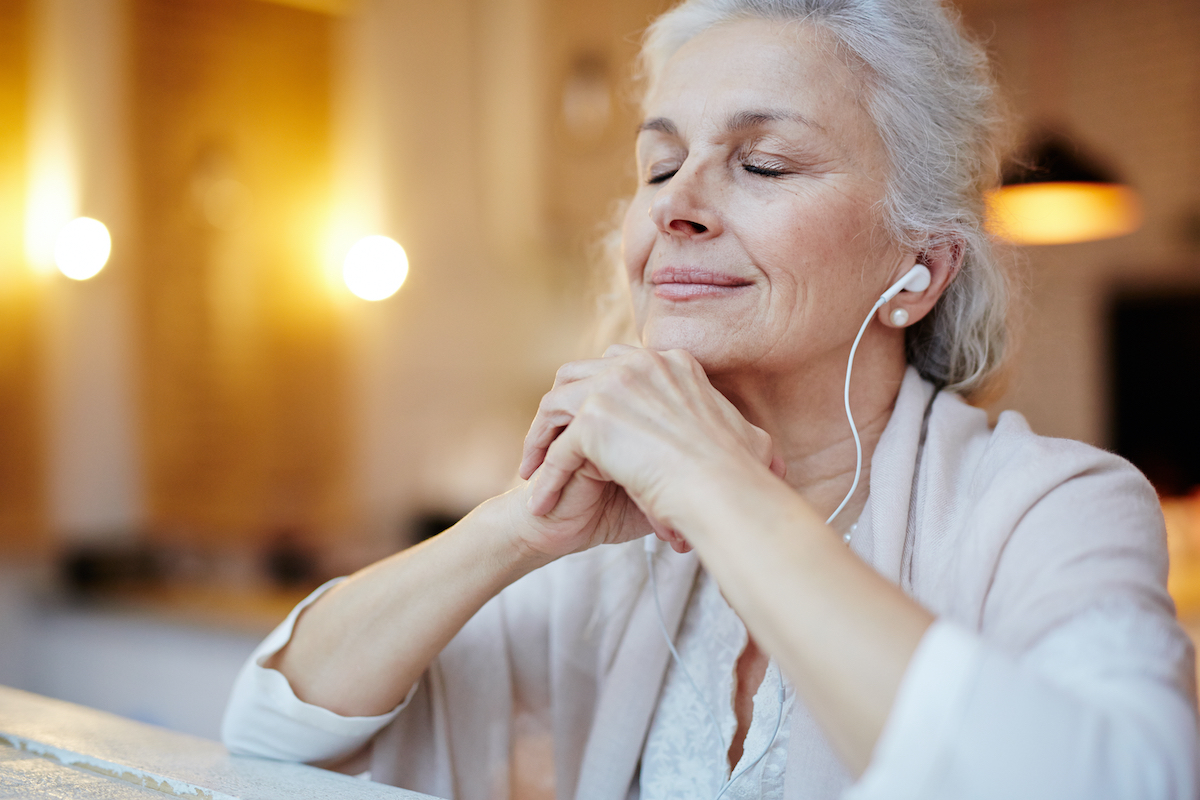 Recent research published in the Journal of the American Geriatrics Society suggests some relaxing tunes may be all it takes to induce improved sleep for older adults. Researchers analyzed five prior studies including over 280 older adults (ages 60+) dealing with sleep problems. Sure enough, those who listened to music 30 minutes to one hour before bedtime enjoyed "significantly better" sleep than those who did not. Calming music appears to be more beneficial for sleep than rhythmic tunes. For reference, calming music was defined as having a slow tempo of 60 to 80 beats per minute and a smooth melody.

Interestingly, listening to music before bed for longer than four consecutive weeks resulted in even greater sleep improvements than stopping the habit after a week or two. So it's a good idea to stick with this approach for at least a full month before judging its effectiveness.

"Music therapy might be the first line of therapy to recommend in older adults with sleep disturbances, which would reduce the need for dependence on sedatives and sleeping medication," the study reads. And for more great ways to sleep better starting now, see here for The One Secret Sleep Trick That Can Change Your Life.

Plenty of research points to aerobic exercise as a panacea for sleep problems in old age. Research released in the scientific journal Sleep Medicine found that just 40 minutes of aerobic exercise per week for a total of 16 weeks helped a group of older women with sleep issues improve their self-reported sleep quality and reduce daytime drowsiness.

Another study published in The Journal of Geriatric Psychiatry and Neurology refines those initial findings by concluding that moderate aerobic exercise in the evening may actually be more helpful for sleep than morning exercise. A group of 30 older adults participated in a low-intensity aerobic exercise program in the evening every day for eight weeks, while another group of older adults engaged in the same workout regimen in the morning. Those assigned to the nighttime exercise group reported being able to fall asleep faster and greater overall sleep satisfaction than the morning cohort.

There are plenty of potential causes of insomnia, but anxiety actually ranks among the most common for those over 60. It's estimated that 90% of older adults living with generalized anxiety disorder (GAD) experience frequent sleep disruptions. Consequently, mindfulness meditation may be a great avenue toward better sleep.6254a4d1642c605c54bf1cab17d50f1e

The link between meditation and improved sleep is supported by a study published in Contemporary Clinical Trials. Study authors report that a six-week meditation course helped a group of older adults (average age: 66 years-old) dealing with persistent sleep troubles achieve more regular shuteye than a traditional sleep education course. "Formalized mindfulness-based interventions have clinical importance by possibly serving to remediate sleep problems among older adults in the short term, and this effect appears to carry over into reducing sleep-related daytime impairment that has implications for quality of life," the study concludes. And for more sleep news, see here for the One Secret Side Effect of Having Weird Dreams, Says Study.