23 Thanksgiving Food Facts That Will Blow Your Mind!

Everything you wanted to know but were afraid to ask about your most important—and highest calorie—meal of the year!

Thanksgiving is the ultimate meal of the entire year. For many people, months of planning and prepping go into some of the mouthwatering staples like turkey, stuffing, sweet potatoes, pumpkin pie, and more. But how much—beyond the fact that the pilgrims held the first Thanksgiving feast—do you really know about the food served at this beloved meal?

We dug deep and found some interesting, surprising, fun and even shocking facts to impress your friends and family as you gather 'round the table to give thanks for the abundance this season. Check 'em out and then discover the amazing truths behind What Happens to Your Body on Thanksgiving!

For some of us, the main event is the dessert—and if you're all about tradition, then a nice slice of pumpkin pie satisfies your Turkey Day sweet tooth. Or maybe more than just a slice for you, since approximately 50 million pumpkin pies are consumed each Thanksgiving. (If there are eight slices per pie, that's 400 million slices…but there are only 320 million Americans.) Luckily, it's one of the healthier pies, as shown in our exclusive list of the 25 Most Popular Pies—Ranked!

"Stuffed" Is an Understatement 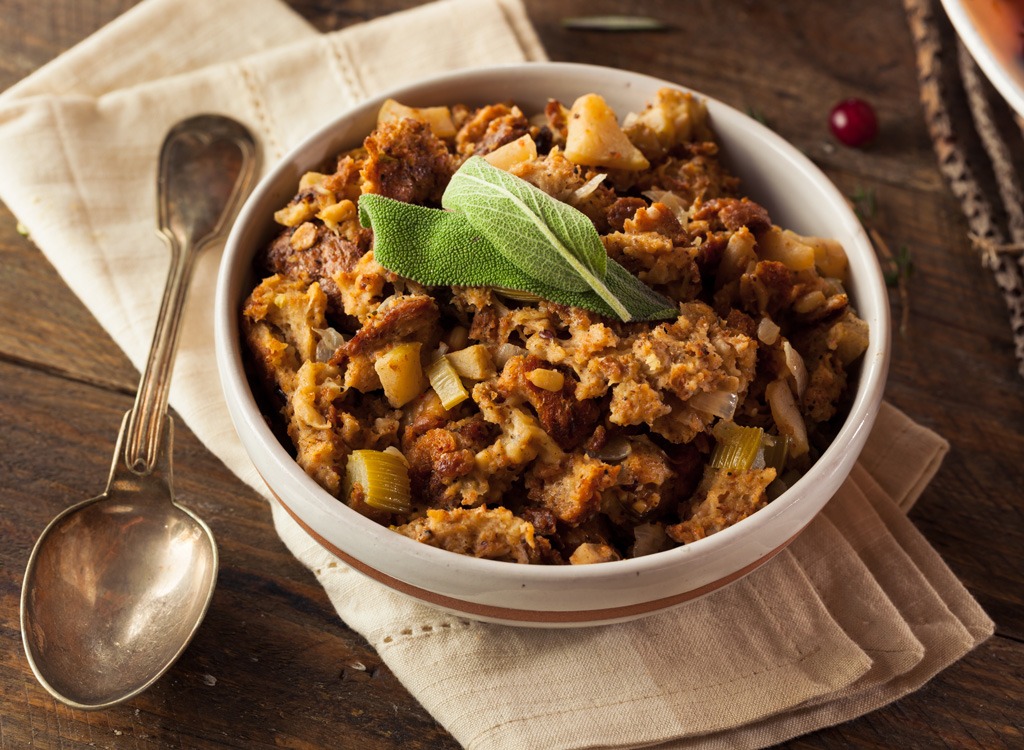 If you feel full, bloated, and ready to never eat again after your Thanksgiving feast, take solace in knowing you're not alone. The average person consumes an average of 3,000 calories at their Thanksgiving meal.

Those Turkeys Are Heavy…

Since turkey is typically considered the main event, have you ever wondered just how much turkey is consumed? Well, we're looking at around 736 million pounds of turkey that Americans eat on just Thanksgiving Day. For reference, that's about the weight of the Empire State Building.

…But Not Making You Sleepy 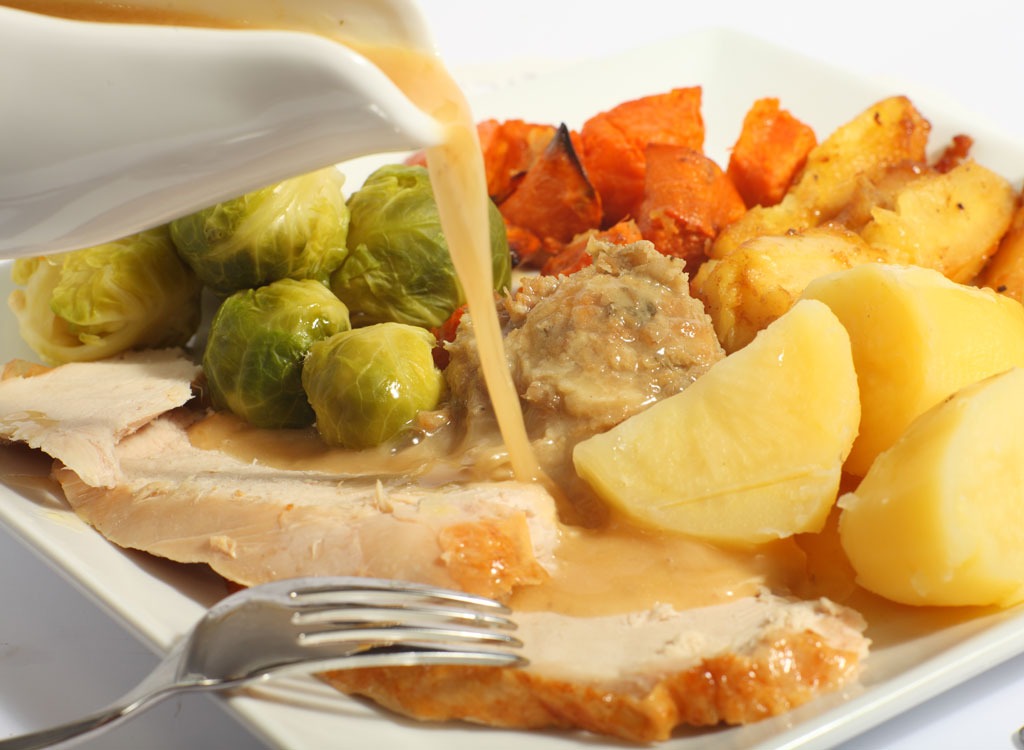 After that giant meal, you know how you can barely stay awake for the big football games but everyone blames it on the tryptophan in turkey? The truth is that the tryptophan doesn't really take effect because of all the other amino acids present in the meal. If you're tired, it's likely from all the preparation, socializing, cleaning, and bottomless glasses of wine and beer you had with your meal! Start bouncing back with these 15 Tips for Damage Control After You Ate Too Much!

Back to Pumpkin Pie 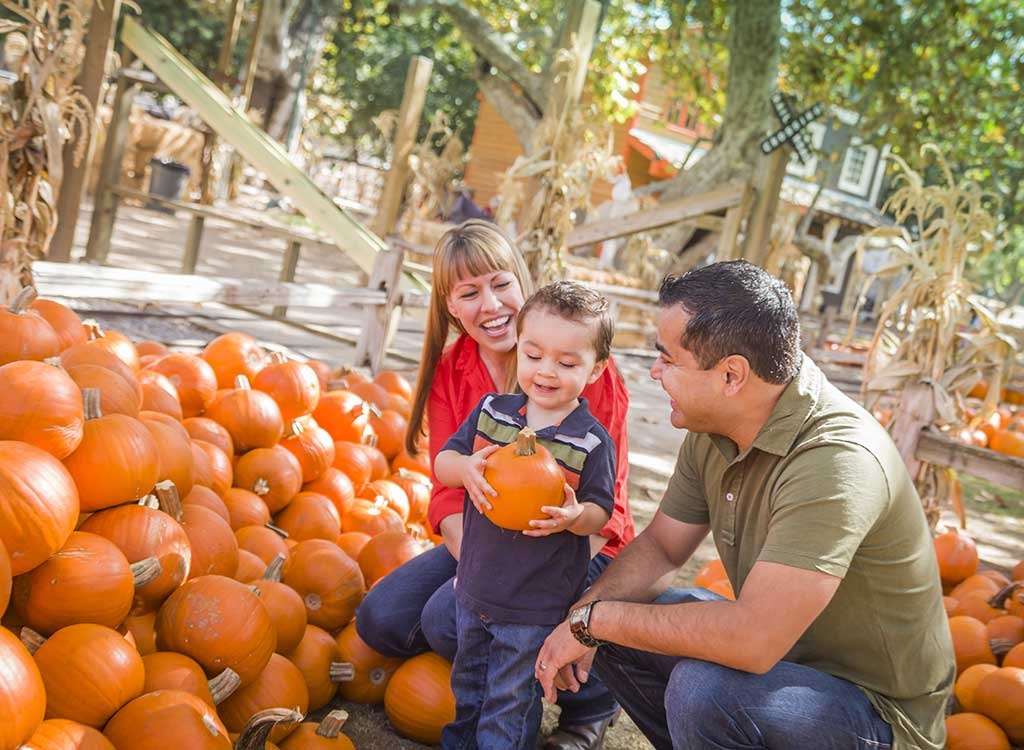 Are you a pumpkin pie aficionado? This one's for you: The book of Guinness World Records clocks in the largest pumpkin pie ever baked at 2,020 pounds and just over 12 feet long. It used 900 pounds of pumpkin, 62 gallons of evaporated milk, 155 dozen eggs, 300 pounds of sugar, 3.5 pounds of salt, 7 pounds of cinnamon, and 2 pounds of pumpkin spice. For something a bit smaller, look for your new favorite pie on this list of 20 Healthy Pie Recipes for Pie Lovers.

If You Prefer Pecan Pie … 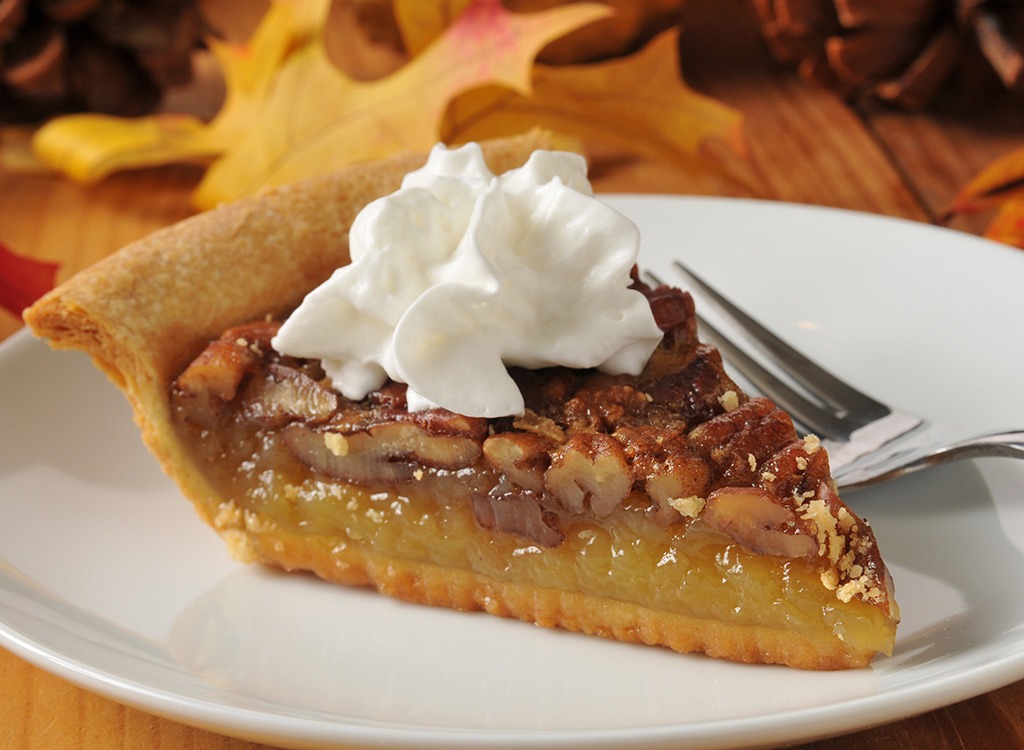 Surprisingly, the most fattening item on your Thanksgiving menu is most likely the pecan pie. It has around 503 calories per slice, which isn't that much less than a McDonald's Big Mac. You can thank pecan pie's high calories to the massive amounts of sugar and corn syrup used to make it.

There are 40 million green bean casseroles made each year. That's a lot of Campbell's soup and fried onions for a side that you either love, hate, or love to hate! For a casserole that's a little bit easier on your waistline and will make your morning easier, check out these 20 Tips and Tricks for Better Breakfast Casseroles. 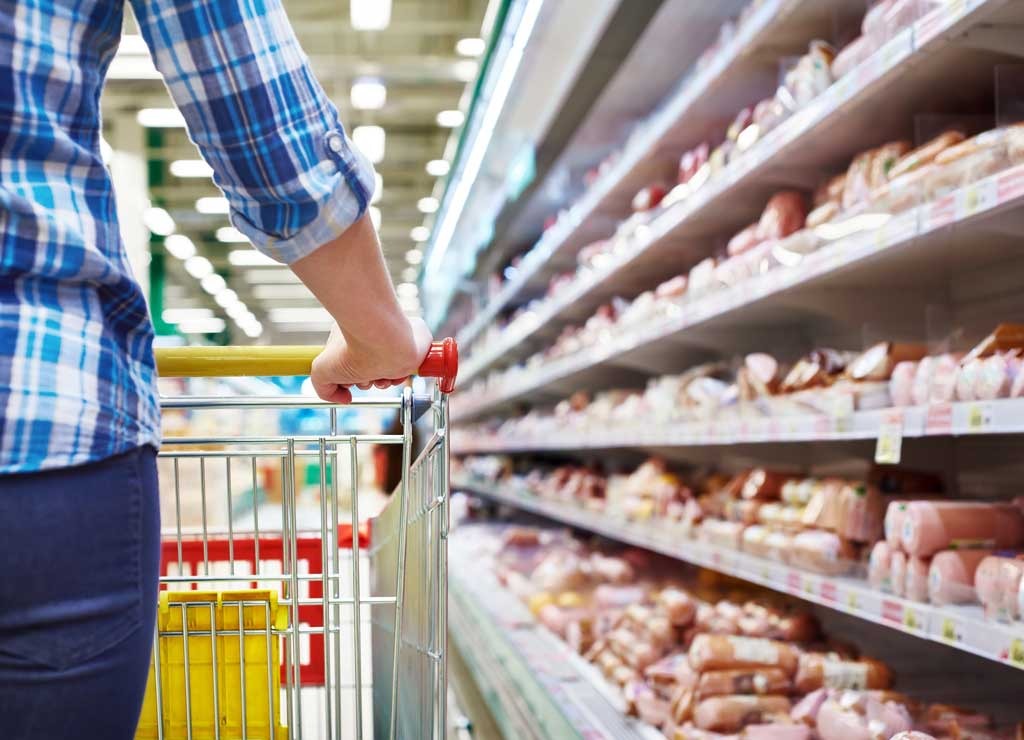 When it comes to the version of Thanksgiving that we know and love today, there's a lot to thank Abraham Lincoln for. It wasn't a national holiday until Honest Abe made it one in 1863 and declared that it would fall on the fourth Thursday of November. But Franklin D. Roosevelt moved the date in 1939 to the third Thursday to try and stimulate the economy toward holiday shopping. It stayed that way for two years until Roosevelt decided to move it back to the fourth Thursday we continue to celebrate today. 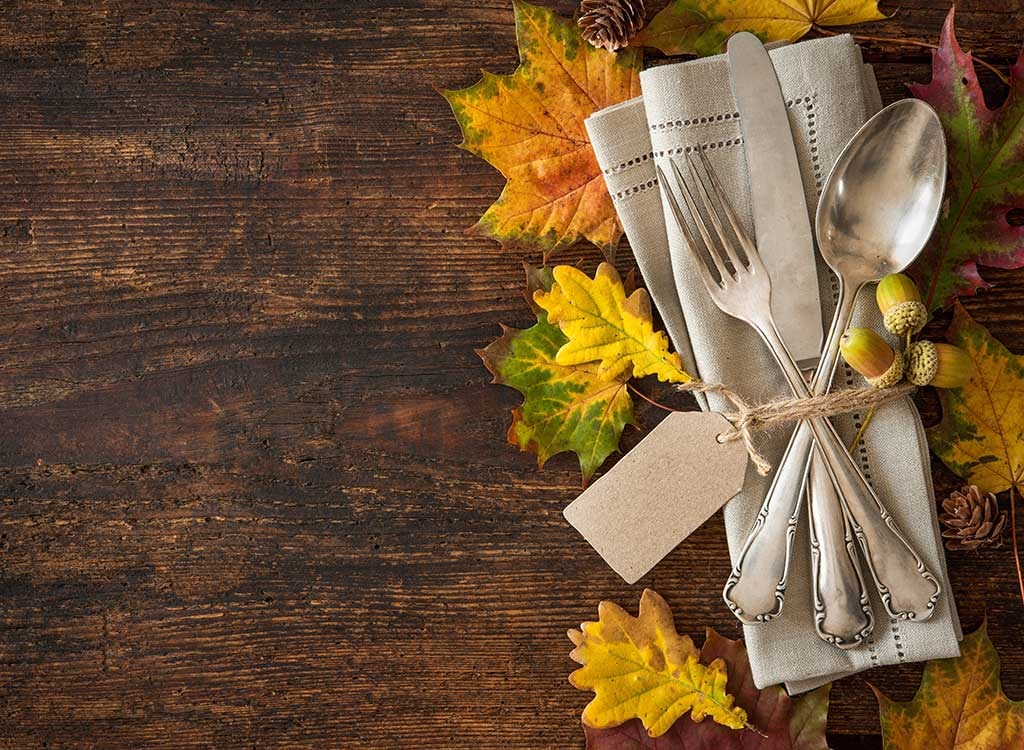 Guess what the pilgrims neglected to use at the first Thanksgiving? Forks! Instead, they ate with spoons, knives, and their hands. Forks simply weren't a regular utensil back then.

Is It Even Possible to Burn Off the Calories?

Not to be downers, but it will take you awhile to burn off your Thanksgiving feast. A 150-pound person would have to run an average of 29 miles to burn off 2,800 calories. So, basically, you have to run a marathon. The good news? Here are 36 Ways to Cut 50 Calories or More to slash your intake elsewhere in your life!

Minnesota is Home of the Gobble Gobble 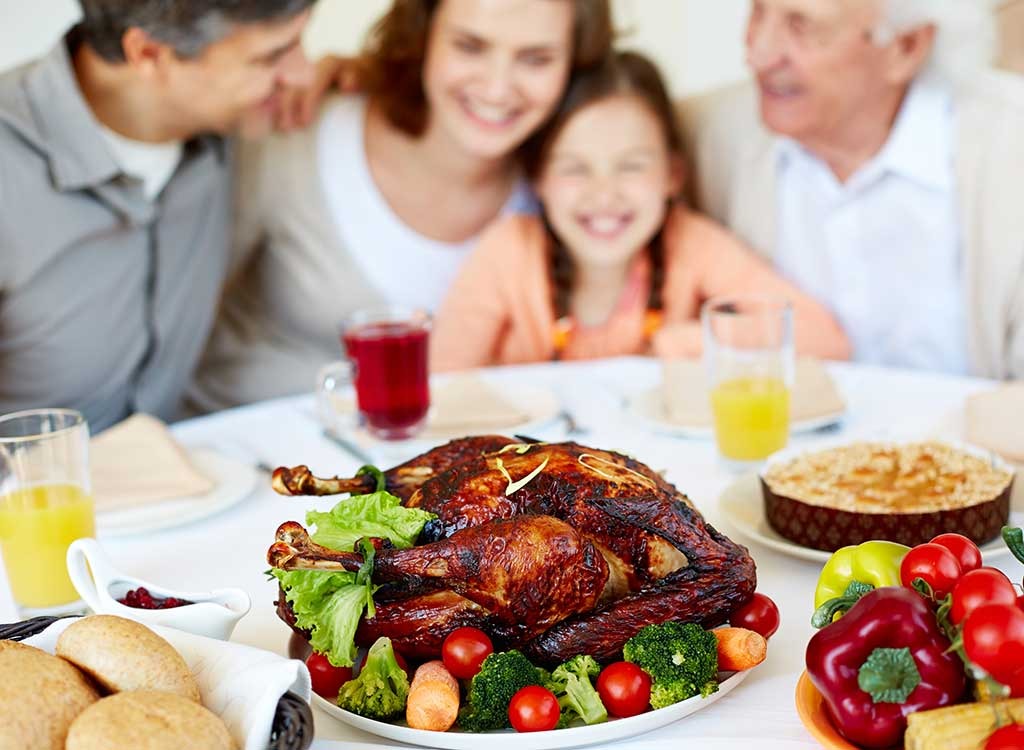 We're thankful for the great state of Minnesota; they provide the most turkeys each year at around 46 million birds. North Carolina comes in second at 32 million and then Arkansas at 30.5 million.

If you've been tasked with making some cranberry sauce from scratch, how can you tell if cranberries are ripe? Impress your guests by first throwing them on the floor to see if they bounce. If they're ripe and ready to eat, the air pockets inside allow them to bounce. If a cranberry is old or damaged, it will go limp.

If You Cooked the Meal, Some Calories Won't Count

If you're in charge of cooking Thanksgiving dinner from top to bottom, we have some excellent news for you: It's estimated that if you ran around the kitchen all day, you've probably burned about 700 calories! Get the place back in order—and better than ever—with these 25 Ways to Organize Your Kitchen for Weight Loss Success.

Pilgrims and Turkey Were Never a Match

We hate to bust the image that's been in your head since elementary school, but historians say turkeys weren't served at the first Thanksgiving! Instead, the pilgrims dined on deer or venison, ducks, geese, oysters, lobster, eel, and fish. They probably ate pumpkins, but not pumpkin pies. Also missing from the table: mashed potatoes, sweet potatoes, and cranberry sauce, just to name a few. 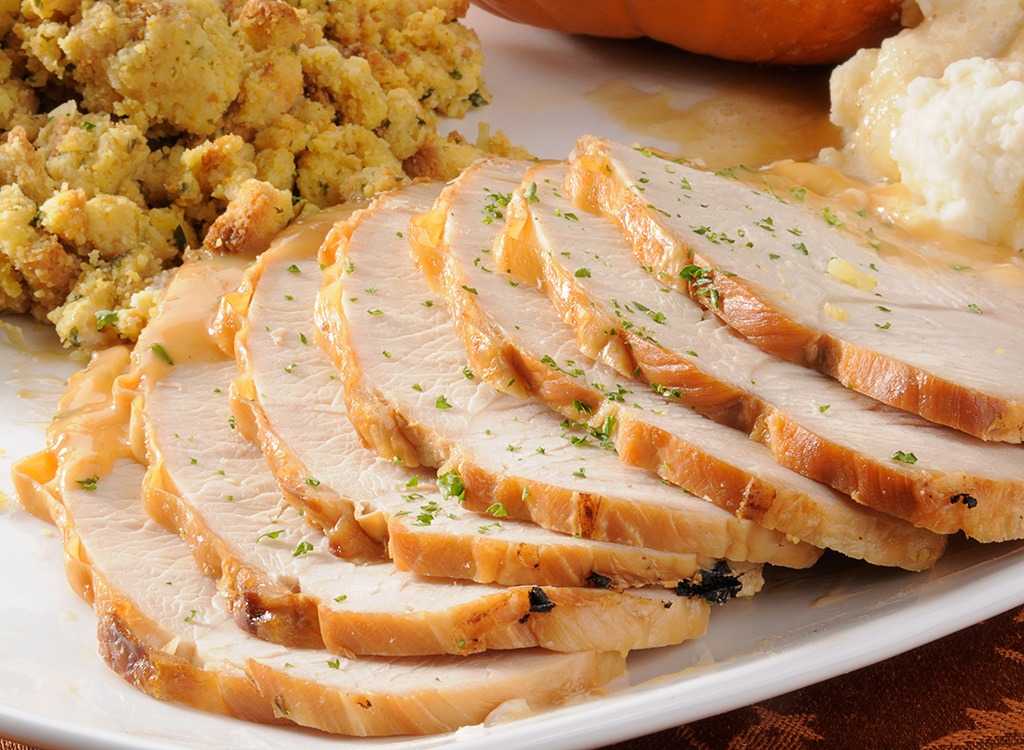 Food manufacturers are pretty clever, but this fact is a memorable one. Swanson created there frozen dinner meals in 1953 because Swanson had 260 tons of extra turkey that year. Unsure what to do with it, a salesman suggested packaging it onto aluminum trays with other sides like sweet potatoes. (Airline meals are also said to have helped inspire the trays!) Regardless, we hope that Swanson employee got a big bonus that year. It's not our favorite brand among the 22 Best & Worst Frozen Dinners but we appreciate the clever way they avoided food waste!

Thanksgiving Could Have Been a Fast

If it wasn't for the Wampanoag Indians, Thanksgiving dinner might have looked very different today. In fact, so different that it would have been the complete opposite of abundance and instead be about not having food. You see, the early settlers actually gave thanks by praying and abstaining from food. They were even going to do that when they celebrated the first harvest, but thankfully the Indians joined them and their fast turned into a three-day feast! Phew!

Each year, the president of the U.S pardons a turkey from being killed and eaten at a Thanksgiving dinner. The first turkey pardon ceremony started with President Truman in 1947. How this hasn't become a meme yet, we don't know. 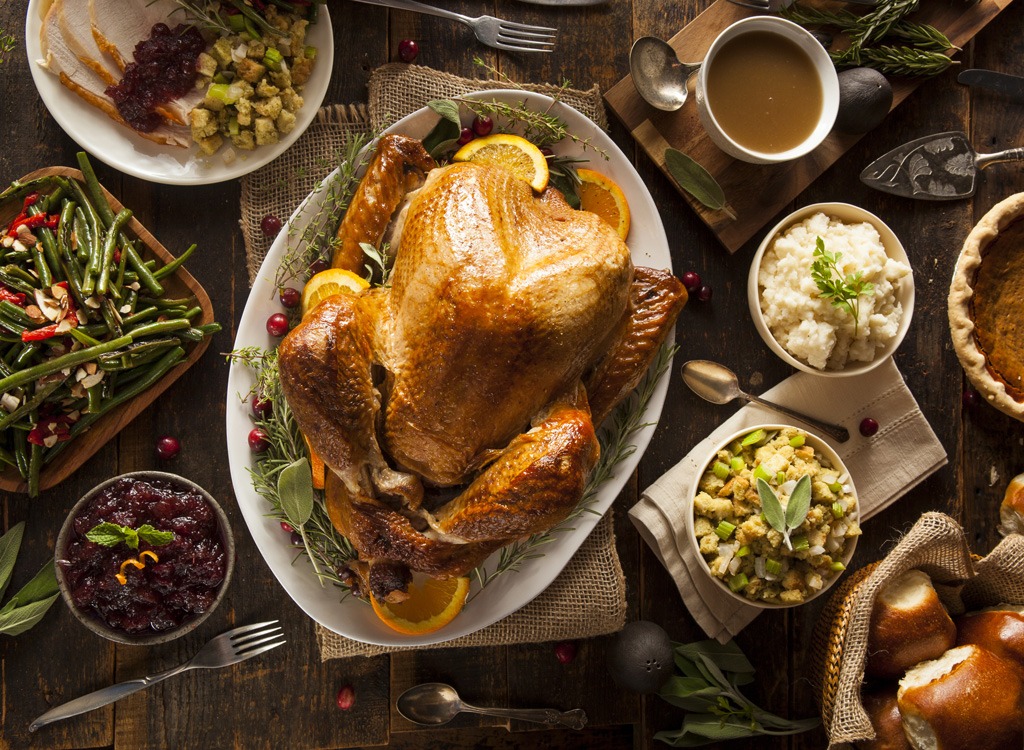 According to the book of Guinness World Records, the heaviest turkey on record weighed in at 86 pounds. To give some perspective on how massive that is for the bird, the average Thanksgiving day turkey weighs around 15 pounds. Feeling a little bit like that oversized bird? Try these 26 Most Overlooked Ways to Lose Weight. 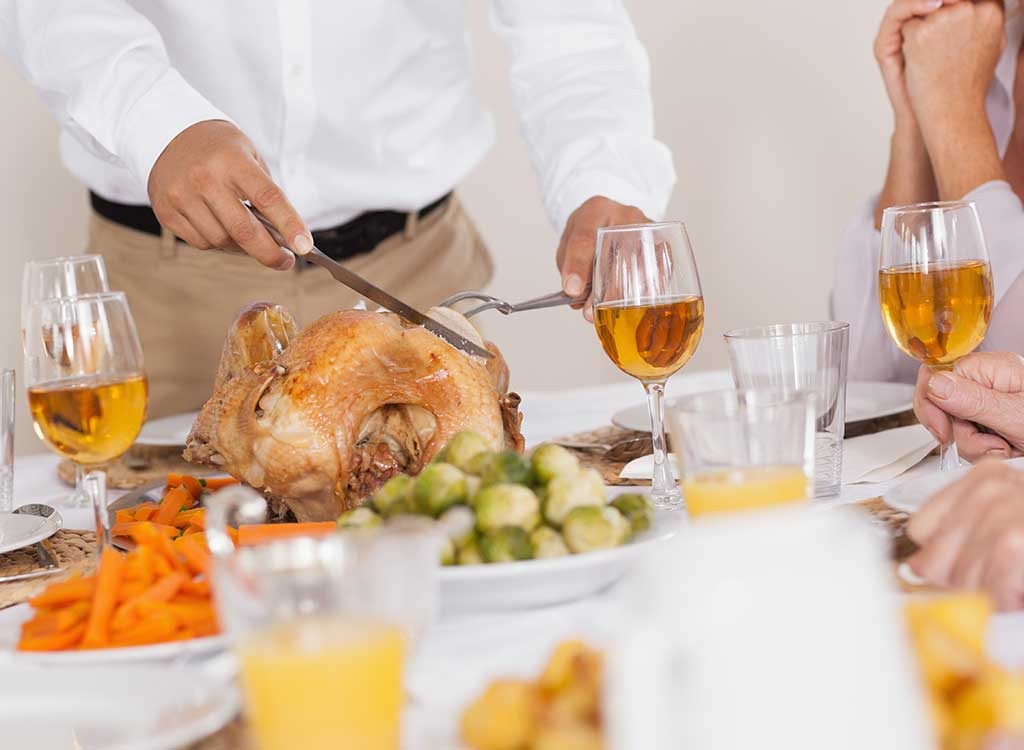 With so many vegetarians in California, you might think the west coast state wouldn't be so into the turkey thing. But it turns out that Californians actually consume the most turkey out of any other state in the U.S. on Thanksgiving Day! Probably because it's such a huge state, but it's still a fun fact.

It's Butterball to the Rescue 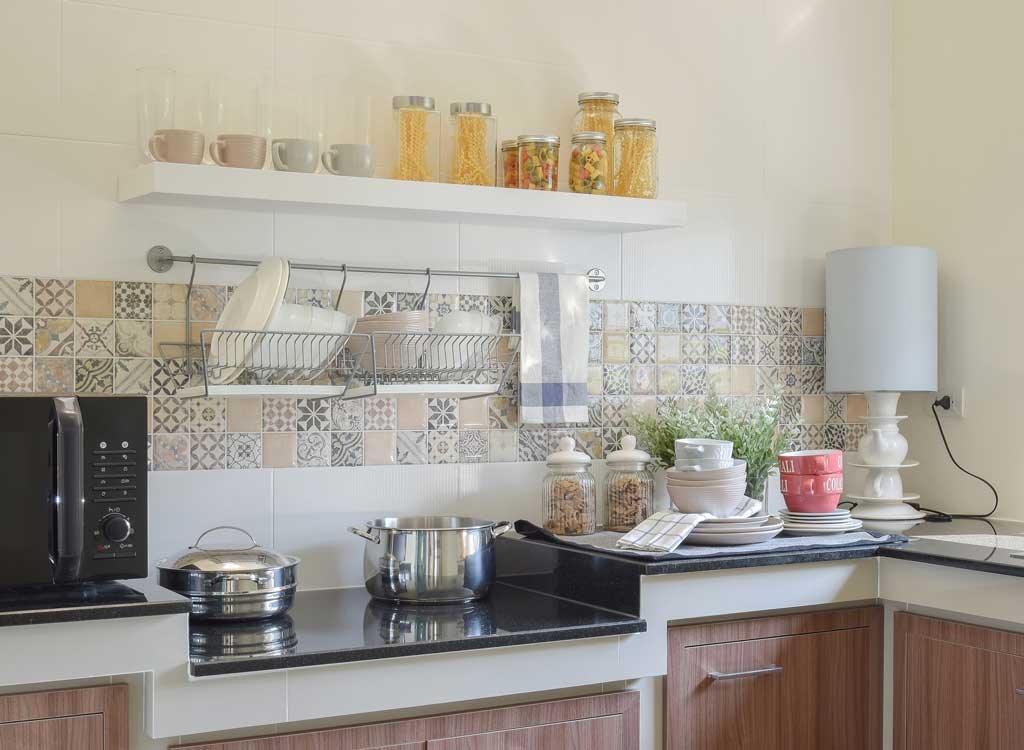 If you're new to the turkey cooking game, there's nothing better than the Butterball Turkey Talk-Line to get you through the uncertainty and panic! It opened nearly 30 years ago with just six home economists to field questions that came in from about from 11,000 panicked home chefs. Today, there's about 50 professionally-trained, college-educated home economists and nutritionists who answer the questions of more than 100,000! Need the number? 1-800-BUTTERBALL

DON'T MISS: 23 Questions for Nutritionists from People Who Love to Drink 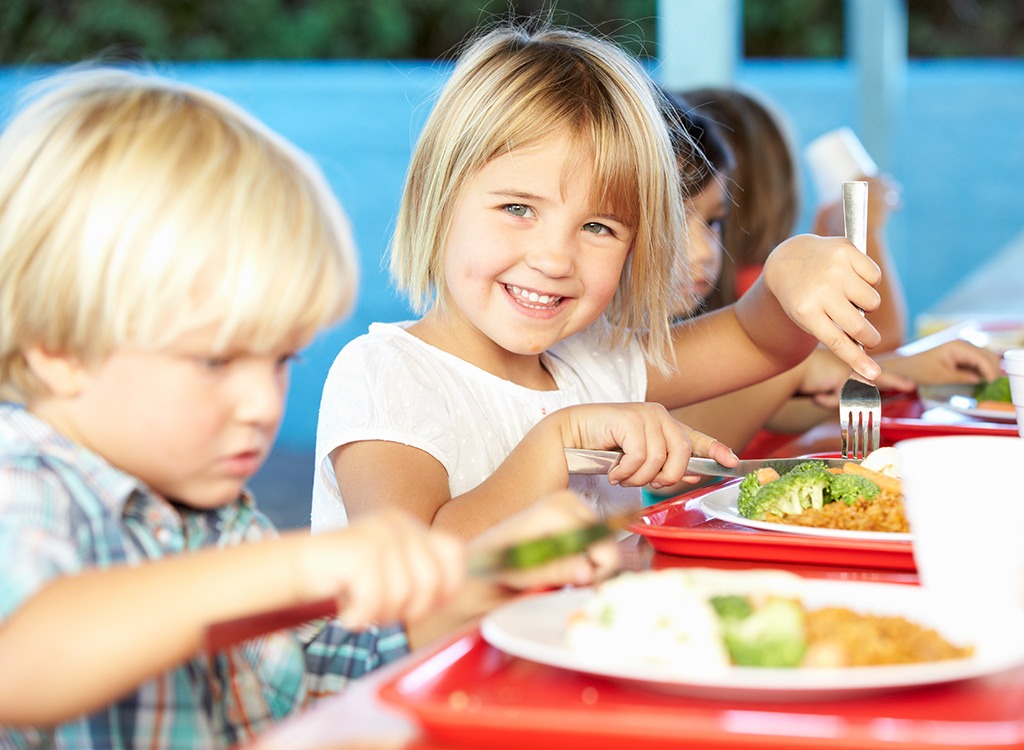 We teach our kids that turkeys say "gobble gobble"—and they do—but it's only the male turkeys that say it. In fact, they say it so loudly that they can be heard up to a mile away!

Keep in mind that your turkey is safe to eat, as measured with a meat thermometer at 165 degrees Fahrenheit. And if your Turkey Day feast is long and lingering, just remember that two hours is the max amount of time that food should be left at room temperature.

Pie Liars Are in the House 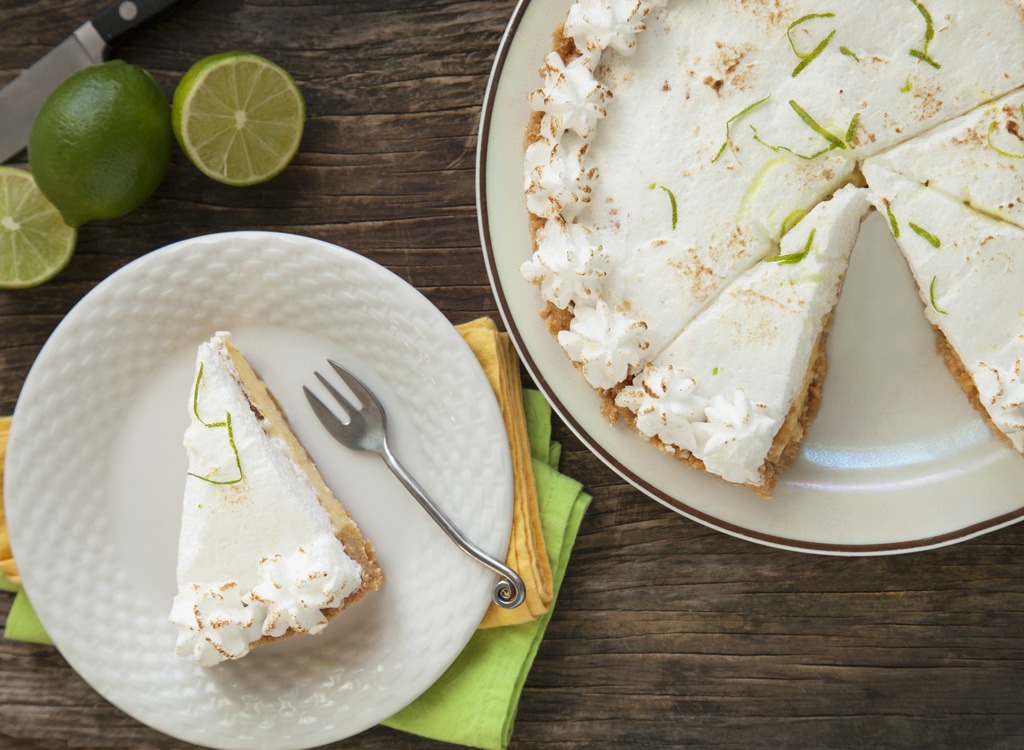 According to the American Pie Council (yep, that's a thing!), six million men ages 35 to 54 have admitted to eating the last slice of pie but denying it when asked. Also, one in five Americans has eaten an entire pie by themselves. FYI, an 8-inch pumpkin pie clocks in at about 2,000 calories, while an apple pie has around 2,500 calories and a pecan pie has 4,000. Not that it stops us—35 percent of Americans say they've have had pie for breakfast! Sounds like one of the 20 Worst Breakfast Habits for Your Waistline to us, unfortunately!