10 "Healthy Chips" That Are Just as Bad as Lay's

Plus, 10 bags that are actually worth buying...

"Oh my gosh! Take this bag of chips away from me," I said to my fiancé as I pushed the snack toward his side of the table. "I can't stop eating them! You're not allowed to buy these things anymore!" "Why do I have to suffer? Can't you just control yourself?" he jokingly replied. "You and I both know that's not humanly possible," I shot back.

If that sounds like a discussion you've had a few times before, you're not alone—and there's actually a scientific reason why a bag of chips is so hard to resist. A lot of it has to do with the crunchy sound they make as we chew, according to a review in Flavour Journal. Though it's totally subconscious, foods that create a loud sound as we chew are associated with freshness—which makes the food seem more appetizing. The study notes that this reaction makes it feel impossible to put down.

As you might have assumed, this isn't exactly good news for your gut. Not only are chips high in calories and saturated fat, they're typically low in fiber and protein. (Translation: they lack the ability to make you feel satisfied!) A handful of chips can result in a big empty bag in no time, simply because they never fill you up. For these reasons, one Harvard study found that daily chip consumption was responsible for adding an average of 3.3 pounds of flab to study participants' frame every four years. If you cut out chips, you would lose more than half a pound of stomach fat every year, even if you changed nothing else about your diet.

But if you love the salty stuff and cutting out the crispy snack isn't an option, we totally get it—as do food producers. That's why there are tons of "healthy chip" alternatives in supermarkets, many of which aren't actually much better than a classic bag of Lay's. Sure, the ingredients may be of slightly higher quality, but the calorie, salt, and fat content are nearly identical.

To help you pick a better bag, we've uncovered some of the worst "healthy chips" in the store. A one-ounce serving of Lay's (which is about 15 chips) has 160 calories, 10 grams of fat, 1.5 grams of saturated fat, 170 milligrams of sodium, 1 gram of fiber, and 2 grams of protein. The surprising options below all have near-identical nutritional labels. There are a few good eggs, among the rotten ones, though. After you've learned which bags to keep out of your cart, continue reading to the end to discover 10 tasty options that actually live up to their "better-for-you" claims—and save both money and calories by choosing our healthiest snacks under $1! 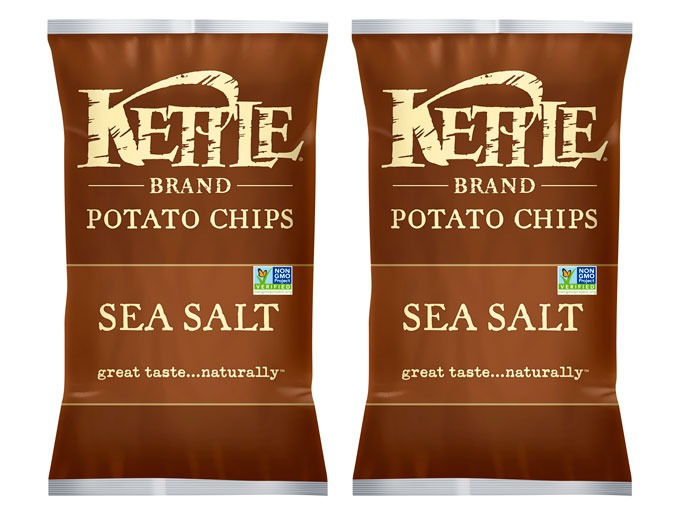 Yes, they're organic and have sea salt, but don't let those buzz words fool you. These chips have about the same number of calories and fat as classic Lay's. The only leg up it has over the yellow bag is the slightly—and we mean very slightly—lower sodium content. Salt is salt, so using sea salt doesn't automatically make something healthier. However, it does have a slightly more intense flavor than the conventional variety so food manufacturers can get away with using a little bit less overall as a result. 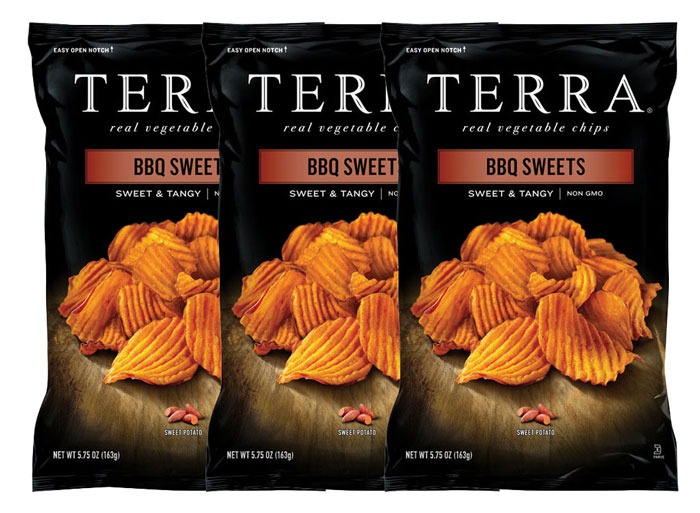 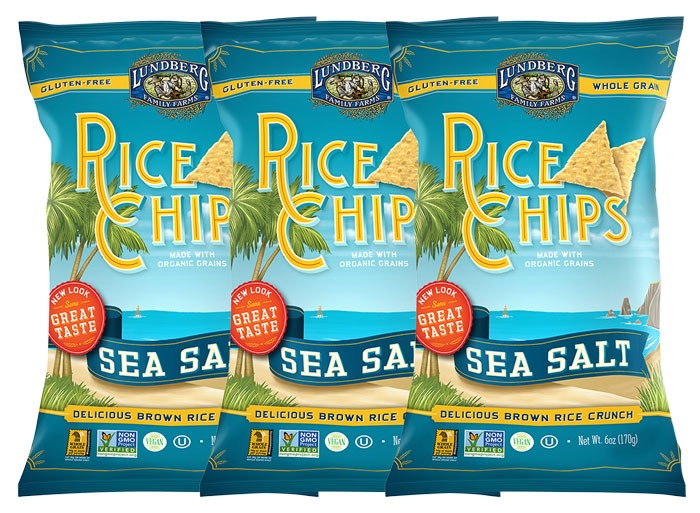 This snack may be organic, vegan, kosher, and gluten-free, thanks to its brown rice base, but that doesn't mean you can down the entire bag without guilt. A serving of Lundberg Rice Chips will only save you two grams of fat, a gram of saturated fat, and 10 calories, making it on par with its more mainstream competitors. 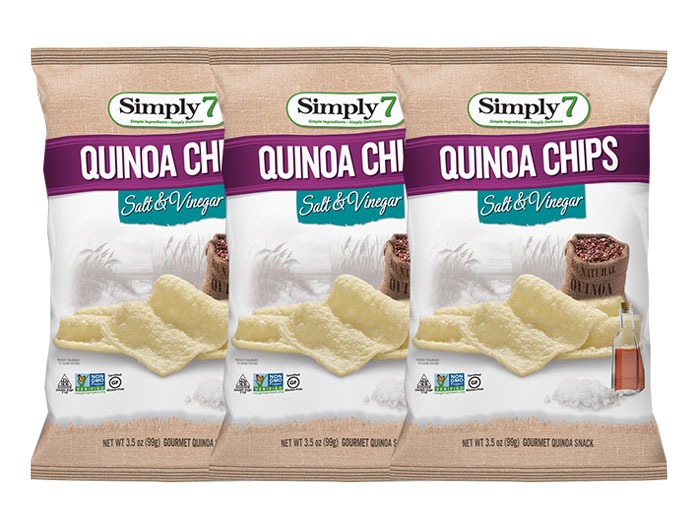 Don't let the quinoa and lower calorie count fool you, this is not a superior chip. Not only does it carry 2.5 times the salt as a serving of Lay's it actually serves up less fiber and protein. A fact many would assume would be the opposite considering it's primarily made with a nutrient-rich super grain like quinoa. 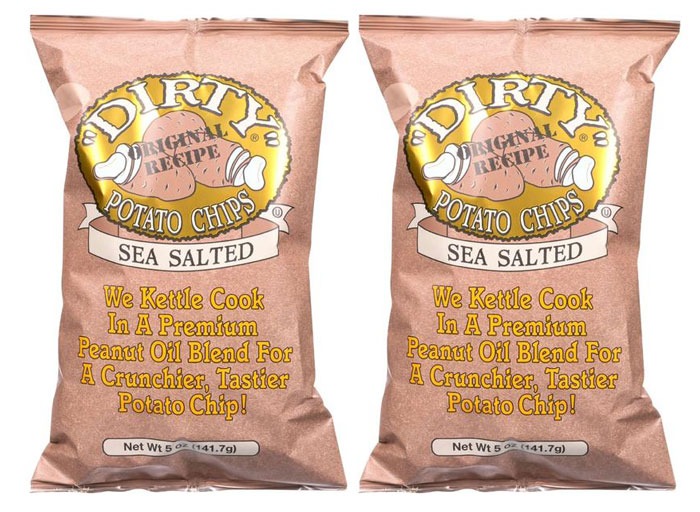 If you're watching your salt intake these are a better addition to your diet than Lay's, however, when it comes to calories and saturated fat content, they aren't any better so be sure to stick to the recommended serving size if you decide to chow down. Creating your own "snack packs" at home with the help of Ziploc baggies can help—which is just one of our best tools to help you get serious about losing weight. 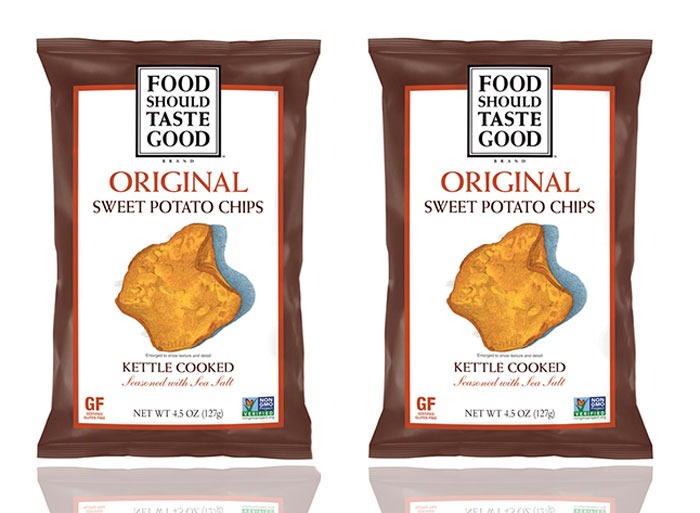 With its modern minimalist packaging, splattered with keywords like "certified gluten-free"all natural," it's easy to see why so many people assume this bag is filled with wholesome crisps. The numbers don't lie, though. These crisps have just as many calories as Lay's and only one less gram of fat. While they use to be less caloric (and Eat This-approved), a new recipe has recently earned them on our do not eat list. 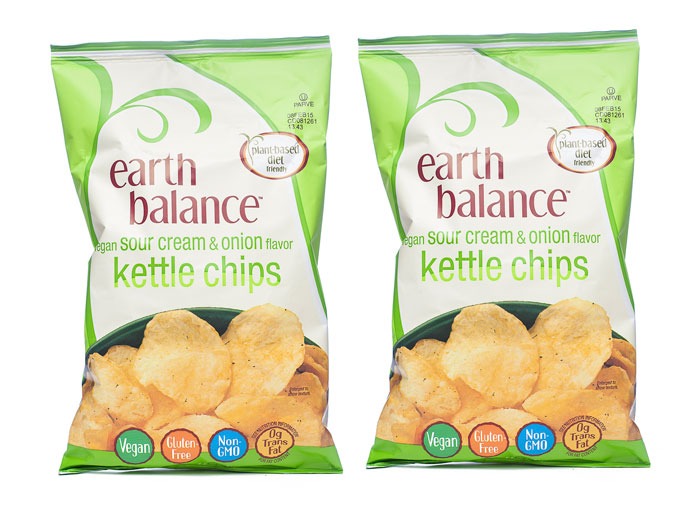 It would take a 150-pound person 13 minutes to work off a serving of these Earth Balance chips and 14 minutes to burn off the Lay's. 'Nuff said. 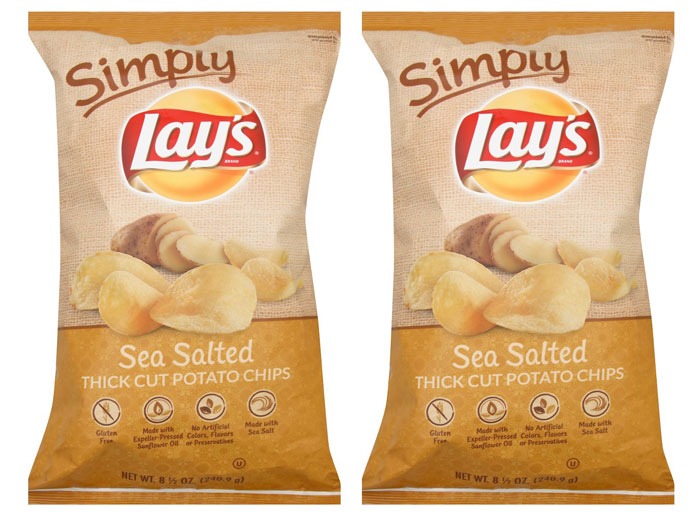 The only difference between Lay's original chips and those from its "Simply" line? The Simply chips are made with expeller pressed sunflower oil while the traditional ones are coated in a blend of sunflower, corn, and/or canola oil. "Expeller-pressed" means no chemicals were used to remove the oil from its source, so it is a superior oil no doubt, however, it's the only thing that makes these chips any better than its conventional cousin. 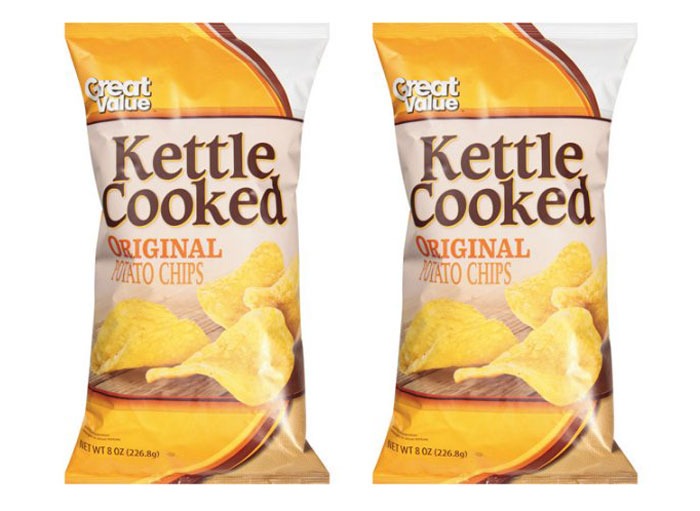 It's a common misconception that kettle cooked equals a healthier chip. While basic bagged chips are fried using a conveyer-belt-like continuous process, kettle cooked chips are dipped into oil in batches. After one batch is dunked and removed, a second batch goes in. The bottom line: There aren't any significant health benefits of using one cooking method over the other. Eat these chips if you're looking for something lower in salt, but aside from that, they're really no better than Lay's classic snack. 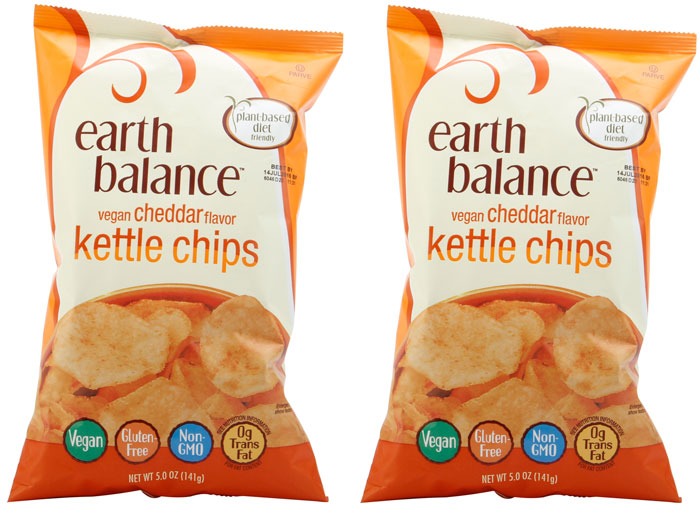 These actually carry more fat than a serving of Lay's. Leave them behind. There are far better options that deserve a place in your shopping cart.

And now, the bags that are actually worth buying… 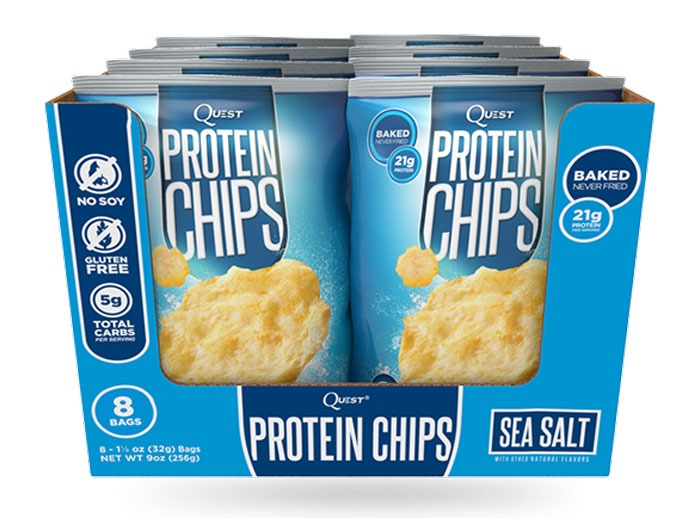 Made from dried potatoes, a blend of milk protein and whey protein isolate and sea salt, this crunchy snack is sure to put your sad bag of Lay's to shame. In fact, after a protein shake, these healthy chips may just be the next best thing to down after a workout. Before you laugh us off, you should know we have two big reasons to back up our claim: The salt can help replace electrolytes lost after a sweaty workout and one bag serves up as much muscle-repairing protein as a 2.5-ounce chicken breast. 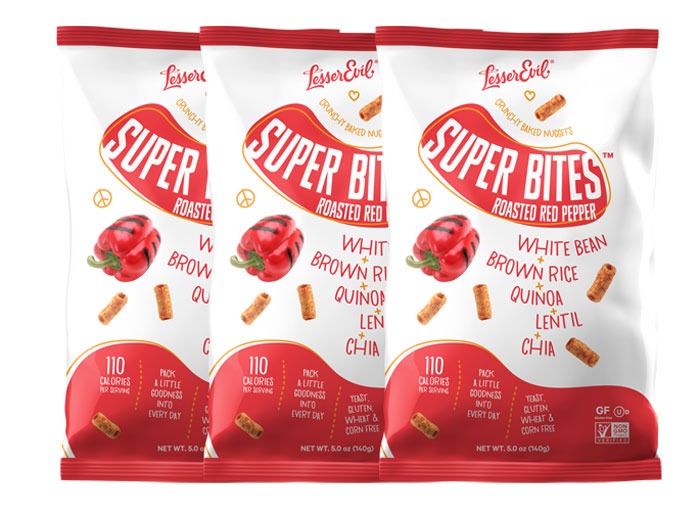 Made from a combination of white beans, quinoa, lentils and chia seeds, this clean and crunchy snack chosen in lieu of Lay's will save you 50 calories and seven grams of artery-clogging fat. The tubular crunchy bites have a flavor reminiscent of BBQ chips that is downright addictive. Better yet, you can eat 46 pieces before you hit that 110-calorie mark. To put things into perspective, you can only gobble down 10 Lay's before consuming in the same number of calories. 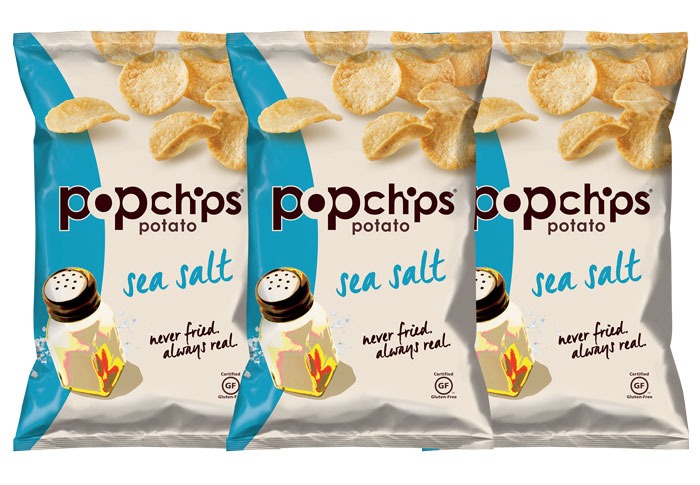 Popchips' unique method of heating their potatoes in a pressurized chamber, gives the circular chips their trademark shape. They're coated with oleic oils, healthy monounsaturated fats which can help reduce appetite, promote weight loss, and bolster memory. Talk about a triple threat! 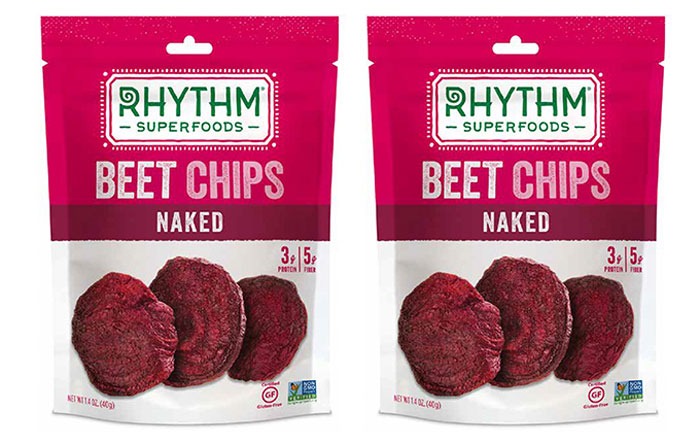 A chip made solely from dehydrated beets may not sound like it would be appetizing, but we assure you, these bad boys are downright delicious. They have the same crunchy texture as potato chips and actually serve up the satiating fiber necessary (20% of the day's intake!) for them to be part of a filling snack. 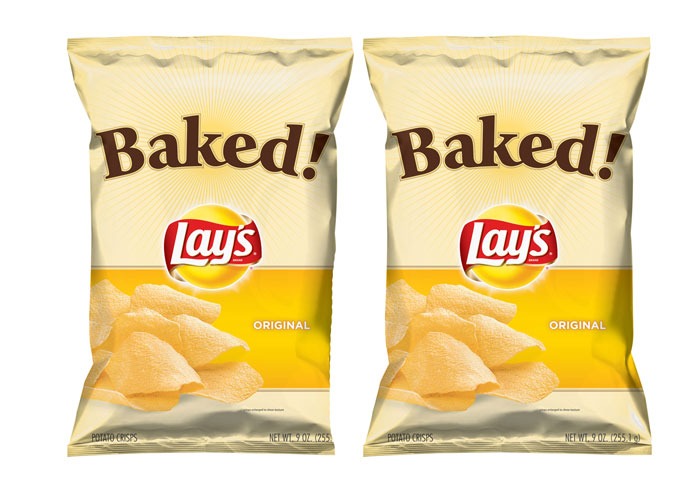 In our report, 35 Of Your Favorite Chips—Ranked, Lay's Oven Baked Potato Crisps stole the top spot. They're made with some unnecessary sugar, but other than that, they're low in calories and sodium and have a simple list of ingredients. Since they're baked, not fried, they also have 65% less fat than regular potato chips 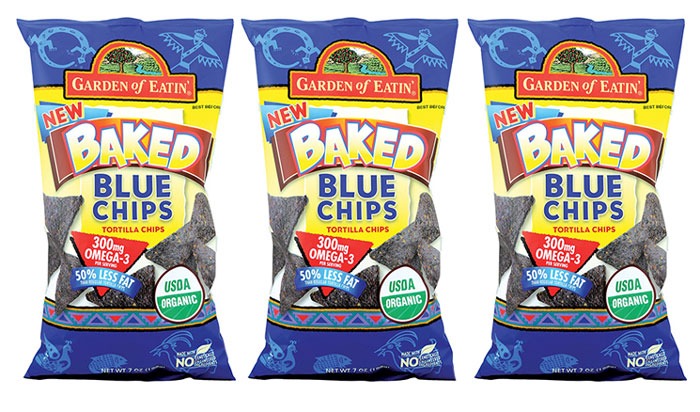 With just 120 calories and three grams of fat per serving, these indigo chips make the perfect companion for your favorite salsa or Tex-Mex inspired recipe. 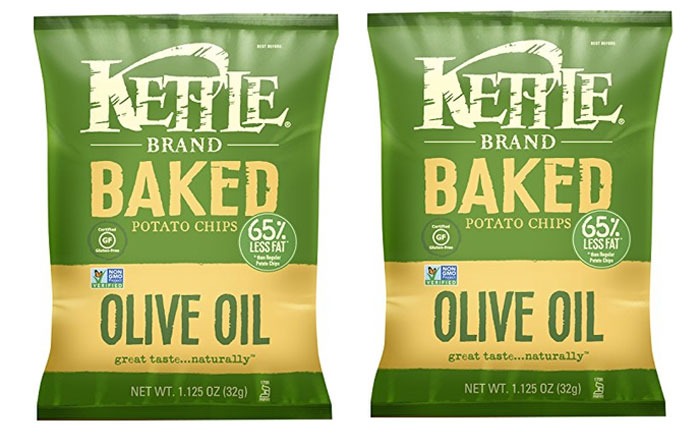 Unlike other baked chips, which can be a bit dried out, these actually look, feel, and taste like the real deal. It's all thanks to the olive oil, a type of healthy fat that may increase blood levels of serotonin, a hormone associated with satiety. 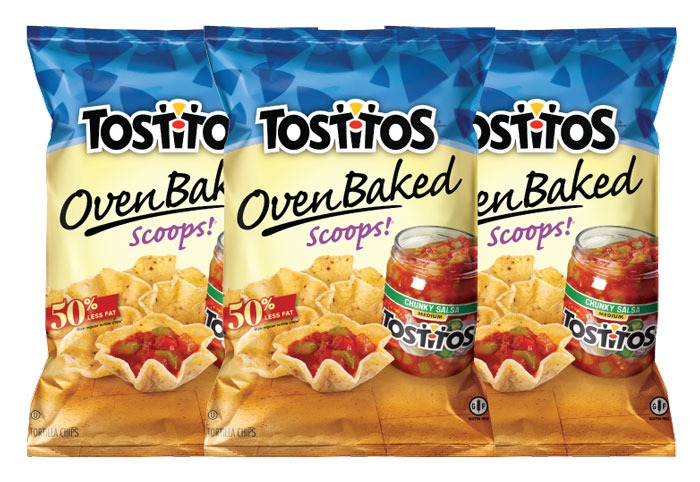 At 120 calories and just three grams of fat, consider this one of the healthiest salsa scoopers in the supermarket. This baked version carries 50 percent less fat than its fried counterpart, with no loss of flavor. We also love that these crisps are made with only three ingredients: corn, vegetable oil, and salt. Any tortilla chip made with more than that doesn't deserve a place in your shopping cart. 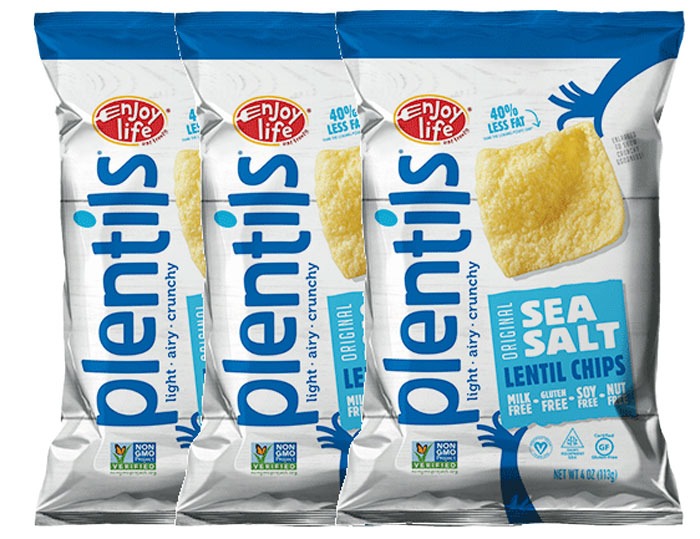 This gluten-free chip alternative is primarily made from potato starch, salt, turmeric, and lentil powder—an ingredient not typically used to make packaged snacks. The result is a crispy, airy snack with the crunchy texture and salty flavor you crave in a chip. 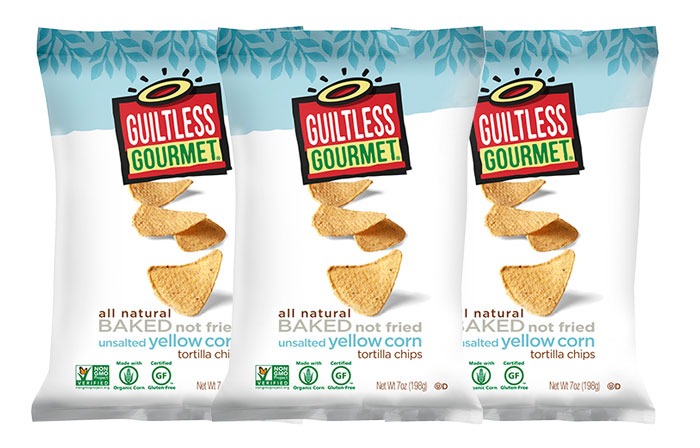 If you have high blood pressure, make this your go-to chip. With just 26 milligrams of sodium per serving, these healthy chips won't flood your system with salt.