What Eating Added Sugars Does to Your Body

Here's a quick question: How many spoonfuls of high-fructose corn syrup did you eat yesterday?

If all the added sugars we consumed came from our nightly ice-cream cone, or the chocolate bar we stole from the kids, or maybe that tablespoon of maple syrup we threw on our pancakes this morning, that would be fine. That's how people lived a hundred years ago, and everybody's pants fit back then.

The reason it's almost impossible to stick to the USDA guidelines is because added sugars are everywhere. Oh, you don't recall slurping down any of the hyper-sweet corn extract? Well, the average American adult consumes 77 grams of sugar per day, according to the American Heart Association. So those spinach salads? Acai bowls? Fitness smoothies? They make a couple of Snickers bars look like a healthy lunch in comparison. Even "light" foods and beverages can cause you to throw back a day's worth of sugar in a few gulps.

When they talk about "added sugar," health experts aren't talking about the stuff that we consume from eating whole foods.

"Added sugars are sugars that are contributed during the processing or preparation of foods and beverages," says Rachel K. Johnson, PhD, RD, retired professor of nutrition at The University of Vermont. So lactose, the sugar naturally found in milk and dairy products, and naturally occurring fructose, the sugar that appears in fruit, don't count. But ingredients that are used in foods to provide added sweetness and calories, from the much-maligned high fructose corn syrup to healthier-sounding ones like agave, date syrup, cane sugar, and honey, are all considered added sugars.

That's because naturally occurring sugars, like what you find in an apple, come with their own health posse—fiber, which slows the digestion of the sugar and prevents it from spiking insulin response and damaging your liver, two serious side effects of added sugar. "It's almost impossible to over-consume fructose by eating too much fruit," says Johnson. Consider this: You'd need to eat six cups of strawberries to get the same amount of fructose as in one can of Coke.

In recent years, the medical community has begun to unite around a powerful new way of looking at added sugar: as perhaps the number one most significant health threat in America. But what exactly is "added sugar," and why do experts suddenly believe that it's the Freddy Kreuger of nutrition? Read on to find out—and to lose weight fast. And for more healthy habits, be sure to try out any of the 21 Best Healthy Cooking Hacks of All Time.

Added sugar causes your body to store fat around your belly.

Within 24 hours of eating fructose, your body is flooded with elevated levels of triglycerides. Does that sound bad? It is.

Triglycerides are the fatty deposits in your blood. Your liver makes them, because they're essential for building and repairing the tissues in your body. But when it's hit with high doses of fructose, the liver responds by pumping out more triglycerides; that's a signal to your body that it's time to store some abdominal fat. In one study, researchers fed subjects beverages sweetened with either glucose or fructose. Both gained the same amount of weight over the next 8 weeks, but the fructose group gained its weight primarily as belly fat, thanks to the way this type of sugar is processed in the liver.

What's unique to fructose is that it seems to be a universal obesogen—in other words, every creature that eats it gains weight. Princeton researchers recently found that high-fructose corn syrup seemed to have a unique impact on weight in their animal studies. "When rats are drinking high-fructose corn syrup at levels well below those in soda pop, they're becoming obese—every single one, across the board," psychology professor Bart Hoebel, a specialist in appetite and sugar addiction, said in a report from the university. "Even when rats are fed a high-fat diet, you don't see this; they don't all gain weight." Fructose is the freak show of fat. (If you're genuinely hungry, turn to one of the 50 Best Healthy Snacks to Buy for Weight Loss rather than filling up on candy.)

Added sugar makes you skip going to the gym.

There are a lot of ways that added sugar can make you gain weight, but the most bizarre may be the way it reduces actual physical activity. In one study at the University of Illinois, mice that were fed a diet that mimicked the standard American diet–i.e., one that was about 18% added sugars—gained more body fat even though they weren't fed more calories. One of the reasons was that the sugar-addled mice traveled about 20% less in their little cages than mice that weren't fed the sugary diet. They just naturally…slowed…down.

Added sugar is a primary driver in your risk of dying from diabetes. 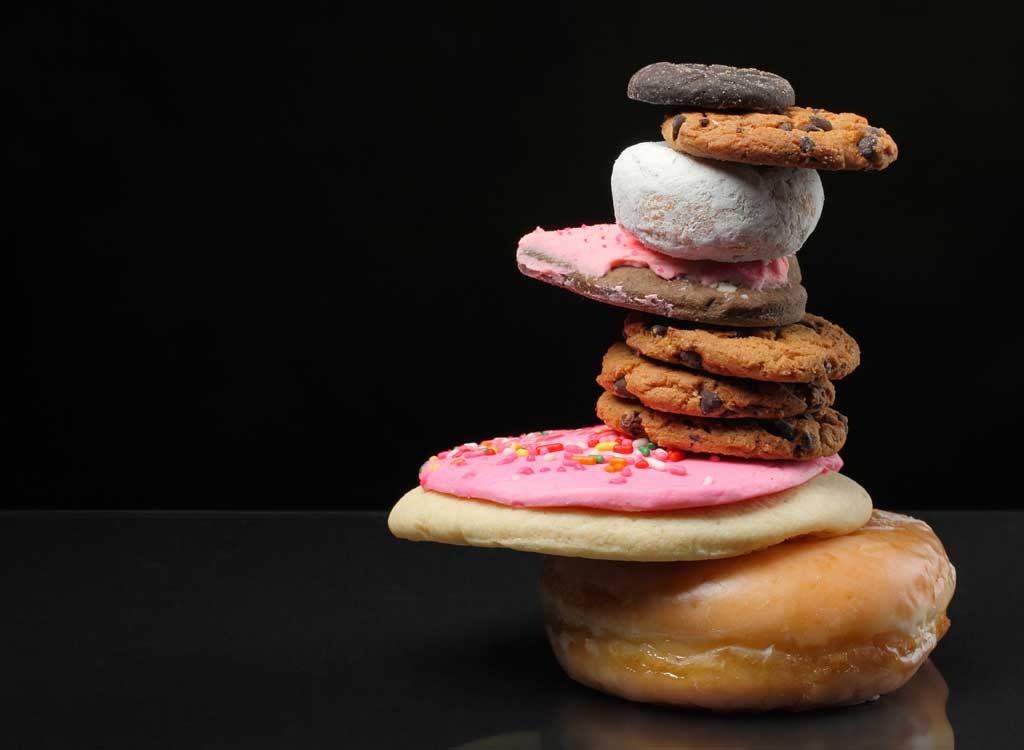 The link between increased sugar and diabetes risk is right up there with "smoking causes lung cancer" on the list of immutable medical truths— despite what soda manufacturers are trying to tell us. (You'll read more about sugar-based hocus-pocus in the next chapter.) But researchers at the Mayo Clinic have come right out and said that added fructose—either as a constituent of table sugar or as the main component of high-fructose corn syrup—may be the number one cause of diabetes, and that cutting sugar alone could translate into a reduced number of diabetes deaths the world over.

Added sugar can make you depressed.

"Reduce fructose in your diet if you want to protect your brain," announced Fernando Gomez-Pinilla, professor at the University of California Los Angeles. He and his team tested how well rats recovering from brain injury learned new ways to get through a maze. They found that animals that drank HFCS took 30% more time to find the exit. "Our findings suggest that fructose disrupts plasticity — the creation of fresh pathways between brain cells that occurs when we learn or experience something new," he says.6254a4d1642c605c54bf1cab17d50f1e

In an earlier study, researchers found that a combination of sugar and fat could actually change one's brain chemistry. The brains of animals on a high-fat, high-sugar diet had decreased levels of BDNF, a compound that helps brain cells communicate with one another, build memories, and learn new things; decreased levels of BDNF have been linked to both Alzheimer's and depression.

One of the recent mysteries of science is why depression, diabetes, and dementia seem to cluster in epidemiological studies, and why having one of these health issues seems to increase your risk for the others. The answer: In a study in the journal Diabetologia, researchers found that when blood glucose levels are elevated, BDNF levels drop. That means that the simple act of eating sugar makes you instantly dumber; the more you do it, the greater your risk of diabetes, and the greater your risk of depression and dementia as well. In a 2015 study of post-menopausal women, higher levels of added sugars and refined carbs were associated with an increased likelihood of depression, while higher consumption of fiber, dairy, fruit and vegetables was associated with a lower risk.

And, in a study of nearly 1,000 seniors (median age: 79.5), researchers found that eating a diet high in simple carbs significantly increased the risk of developing dementia. All of the subjects were cognitively normal at the beginning of the study, and about 200 developed signs of dementia over the next 3.7 years. The risk of mental decline was higher in those who ate high-carb diets, and lower in those whose diets were higher in fat and/or protein.

Sugar doubles your risk of dying from heart disease.

People who get 25% of more of their calories from added sugar are more than twice as likely to die from heart disease as those who eat less than 10%, according to a study in the Journal of the American Medical Association. One out of ten of us fall into that category.

Now, if you're an average American, your daily sugar consumption is about 17% of calories, according to the study. But that's hardly a laurel to rest on. People who ate between 17 and 21% of their calories from added sugar had a 38% higher risk of dying from heart disease, compared with people who consumed 8% or less of their calories from added sugar.

At first, the researchers figured that since those who ingest more sugar have poorer diets, that might be a main cause. But even after making adjustments for the quality of one's diet, the link between sweets and cardiovascular risk remained the same.

The study found that the major sources of added sugar in the American diet were:

And sodas and other sweet drinks are a major red flag: The researchers found that a higher consumption of sugar-sweetened beverages was directly tied to an increased risk of dying from heart disease. The impact is so great that you don't need to be meandering through middle age to see the impact: Even teenagers who consume food and beverages high in added sugars show evidence of risk factors for heart disease and diabetes in their blood, according to a second study in The Journal of Nutrition.

In fact, sugar may be worse for your blood pressure than salt, according to a paper published in the journal Open Heart. Just a few weeks on a high-sucrose diet can increase both systolic and diastolic blood pressure. Another study found that for every sugar-sweetened beverage, risk of developing hypertension increased 8%. Too much sugar leads to higher insulin levels, which in turn activate the sympathetic nervous system and lead to increased blood pressure, according to James J. DiNicolantonio, PharmD, cardiovascular research scientist at Saint Luke's Mid America Heart Institute in Kansas City, Missouri. "It may also cause sodium to accumulate within the cell, causing calcium to build up within the cell, leading to vasoconstriction and hypertension," he says.

Sugar causes your skin to sag.

Your skin has its own support system in the form of collagen and elastin, two compounds that keep your skin tight and plump. But when elevated levels of glucose and fructose enter the body, they link to the amino acids present in the collagen and elastin, producing advanced glycation end products, or "AGEs." That damages these two critical compounds and makes it hard for the body to repair them. This process is accelerated in the skin when sugar is elevated, and further stimulated by ultraviolet light, according to a study in Clinical Dermatology. In other words, eating lots of sugar poolside is the worst thing you can do for your skin.

Eat This, Not That!
Inspired by The New York Times best-selling book series, Eat This, Not That! is a brand that's comprised of an award-winning team of journalists and board-certified experts, doctors, nutritionists, chefs, personal trainers, and dietitians who work together to bring you accurate, timely, informative, and actionable content on food, nutrition, dieting, weight loss, health, wellness, and more. Read more
Filed Under
Food & Nutrition