8 Reasons Why Spain is Skinny

It's no joke that Europeans know how to take care of themselves and Eat This! has acquired a few snapshots of their lifestyle. Take inspiration from the way they live and add it to your weight loss tips...

Last winter, I had the opportunity to travel abroad to España with a group of nine other students from Ohio University. It was a media studies program, so we were heading over with the intent of scouting out interviews with the locals in Seville for our documentaries, while simultaneously immersing ourselves into another world, essentially. Unfortunately, my health was not the best during this trip due to a developing case of asthma. However, I still was observant or rather in awe of the beauty that encompassed me for nearly 30 days.

I discovered that there's truth to the cliche phrase about how, if you traveling overseas, "You come back as a different person." I wouldn't say I magically transformed into an entirely different being, but it reinforced what I had already speculated about going into this trip; Europeans look better than Americans mostly because of the food they eat. I am not one to get tied up in superficial grandeur, so when I say they "look better" I mean they look healthier. The only obese people I saw in Spain were American tourists; now that's saying something! Below, I have illustrated the top things I noticed Europeans do differently than Americans. Who knows? You may find their way of living to be the best weight loss tips you've ever heard.

They Say Mañana to Stressful Things 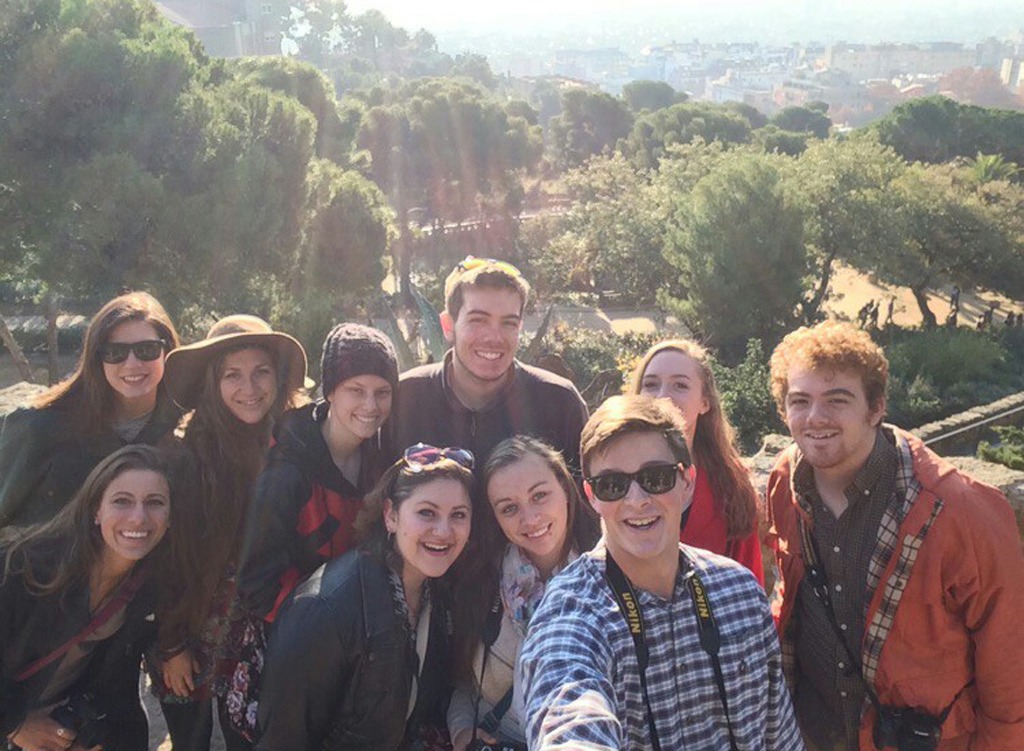 Stress doesn't seem to exist in España. People look younger and are overall healthier because they move through life without letting anxiety and stress from external factors consume them. Meanwhile, in America, everyone is on a deadline and rushing to get things done before time expires. Sure, we produce things quickly and efficiently with this method, but our mental and physical health expire more quickly as a result of it.

Not only do you look younger when you are less stressed, you also have less stomach fat, particularly in the lower abdomen. Why? When you're constantly stressed, the hormone cortisol likes to congregate fat cells and plop them right atop those six-pack abs of yours. Ever heard of the pooch? Yeah, you can give cortisol partial blame for that one. Also, when you're stressed, you go into fight or flight mode which releases glucocorticoids, or, hormones that induce sugar cravings and increase fat stores. Yuck! Read more about these hormones and foods that only make stress worse in the 22 Best and Worst Foods for Stress. 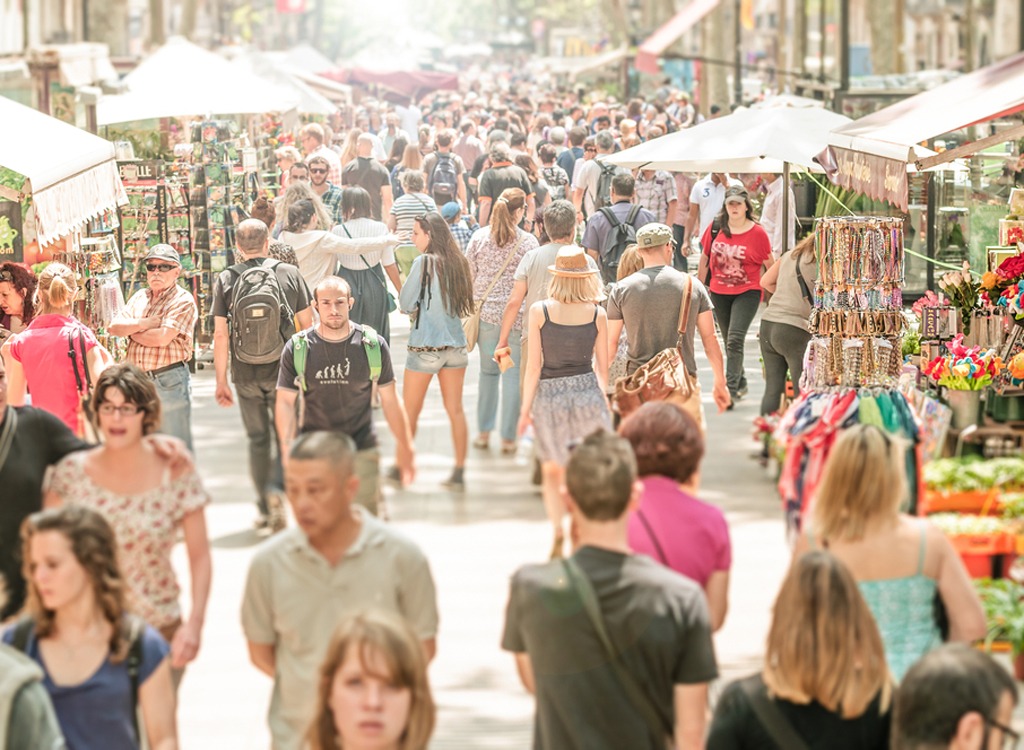 My best friend and partner for our documentary on Andalusian cuisine had a Fitbit, and each day she recorded how many steps we took. The number of steps is irrelevant to me because, as a runner, mileage is how I have trained my brain to interpret the distance I cover. So, after she would press a few buttons, she would happily declare that we walked anywhere from 4-15 miles each day! It's no wonder our feet were in extreme agony by the day's end. Granted, we were going on excursions like tours all over the city on our off days from classes, but even natives can attest to walking a lot.

Similar to New York City, going to work in a car is not as accessible as utilizing the metro or walking. Not to mention, the weather is brilliant over there with average winter temperatures ranging between 50 and 60 degrees Fahrenheit. Point being this: walking is one of the best exercises for you because it's easy on your joints and no equipment is needed to execute it. If you want to know how many calories you are most likely to burn (let's be real, people; everyone's body is on a different agenda) multiple your body weight in lbs by 0.57. So for example, a 140-pound female like myself is likely to burn 79.8 calories after walking one mile. If I walked eight miles on one of those days, I would have burned 638.4 calories. Not too shabby; that's equivalent to what I would burn running 6 miles!

Tapas are small appetizer-like dishes that are wonderful for sharing. These make great late-night, light meals that pair nicely with a glass of wine or a glass of beer. They also serve as nice little bites to munch on midday when perusing through the history-entrenched streets. Want to know how to get rid of bloating? Don't eat such big meals. My favorite tapas were olives (a legacy that was brought to Spain by Arabs long ago) and bits of cheese. I don't think I will ever taste olives as flavorful and cheese as creamy and pure as those bite-size slivers. I would make a trip back just for these little delicacies. 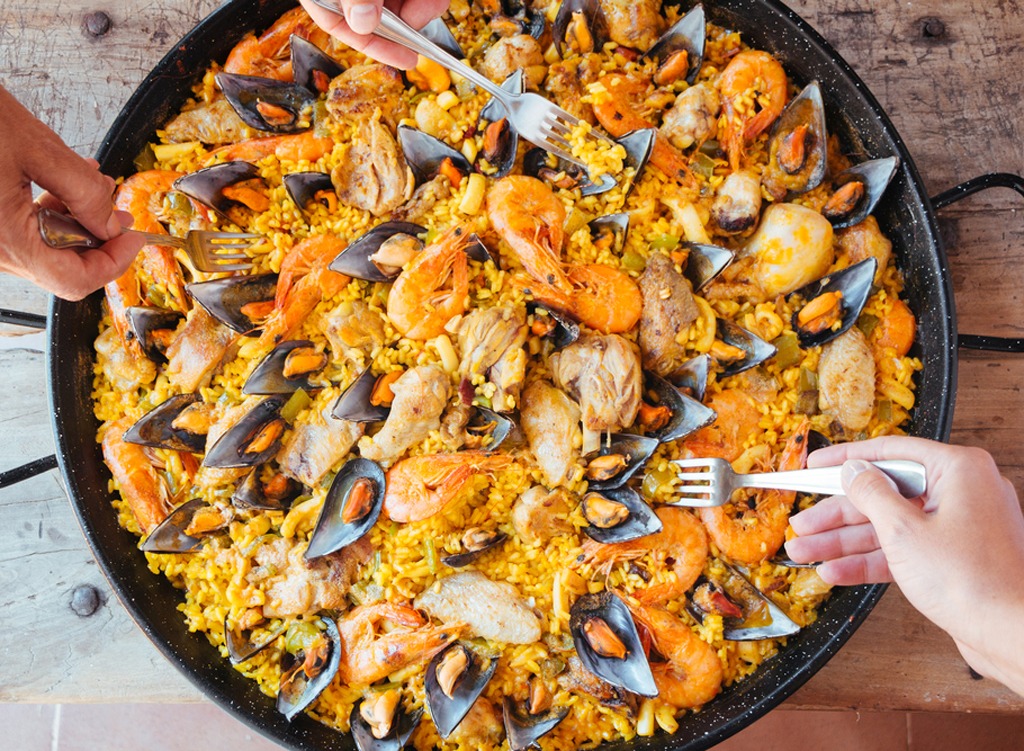 They may not split the check, but they sure split the meals. A traditional dish of paella is a classic dish that people split amongst themselves since the portions at restaurants can be pretty large. In short, a plate of paella starts with a heaping mound of rice seasoned in an array of warm herbs and sprinkled with seafood of all sorts, primarily, mussels and shrimp. It's an incredibly filling dish, but a tasteful one at that. Side note: If the word shrimp caught your eye, check out the 25 Healthy, Protein-Packed Shrimp Recipes!

They Don't Rush Through Meals 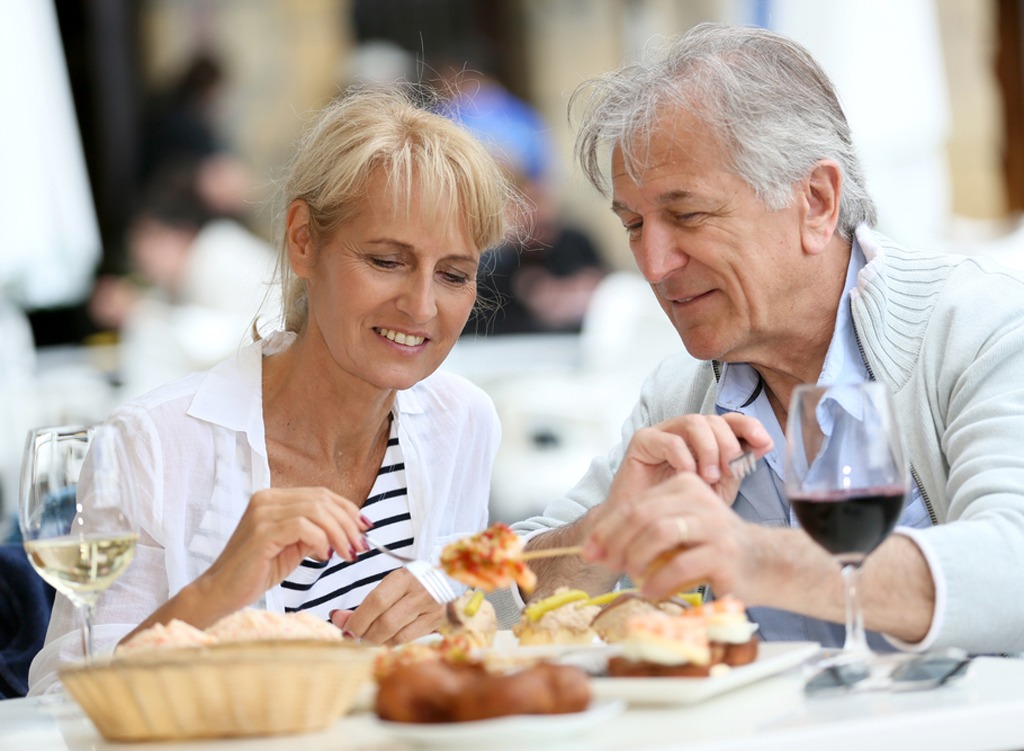 This was probably my favorite part about Spain. During meals, the Spanish have more fascination in conversing with the people around them than they do with the food that sits directly in front of them. Meals can sometimes take up to two hours because they can be served in numerous, smaller courses, or because that's how long it takes you to eat your single plate of food in between bits of conversation.

I admired this quality for two reasons. Number one, it places more value on the idea of building or maintaining a connection with the people you choose to take time out of the day to see. Number two, it allows you to savor each bite, fully and deeply. What better way to eat mindfully than to enjoy your food at a moderate pace and letting each bite digest before you cram more of it into your mouth? It's genius, yet I suspect the Spanish would laugh at us praising them for something they call routine.

They Sip Alcohol Rather Than Chugging it 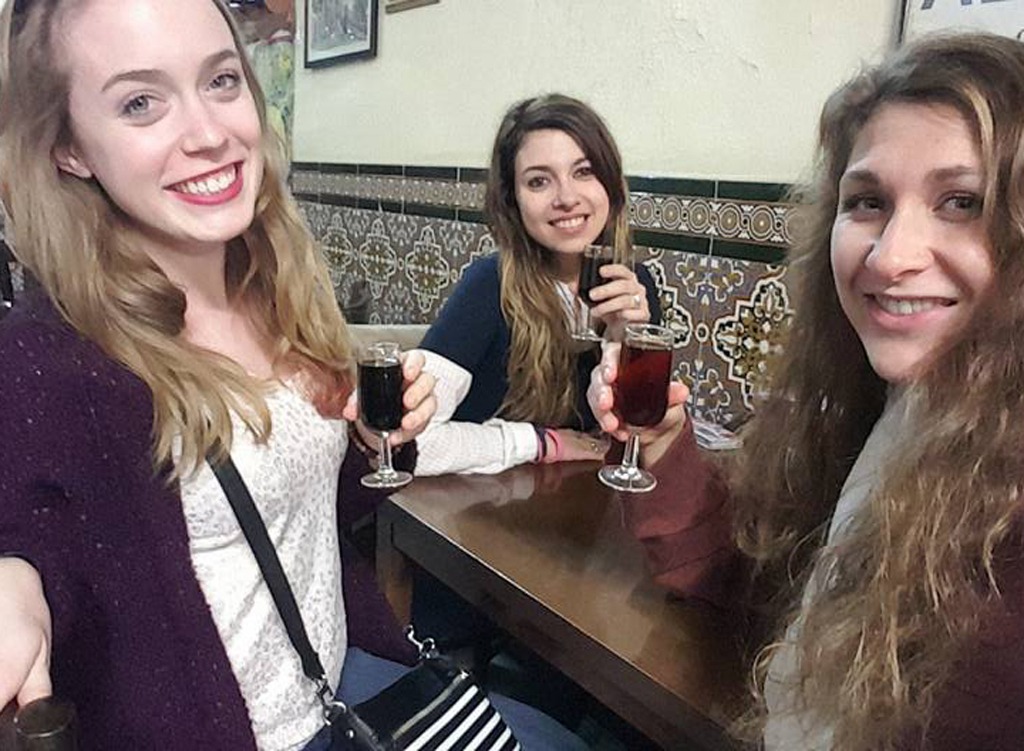 Americans have a bit of a bad rep in Spain for a multitude of reasons, but one that certainly doesn't help is when college kids from the U.S. come over and get blackout drunk when they visit. I remember the director of our program was telling us about a previous time when an American girl sat down at dinner and tossed back a small glass of wine in one gulp as if it were Tequila Tuesday. The look on his face said it all; he wore an utter look of astonishment. He couldn't believe the rate at which she drank that and it stuck with him. Can you imagine how many calories the Spanish much save each year in alcohol? Not to mention all the food you eat when you're drunk, too. The moral of this blurb? Adapt the Spanish's class and sip your wine. 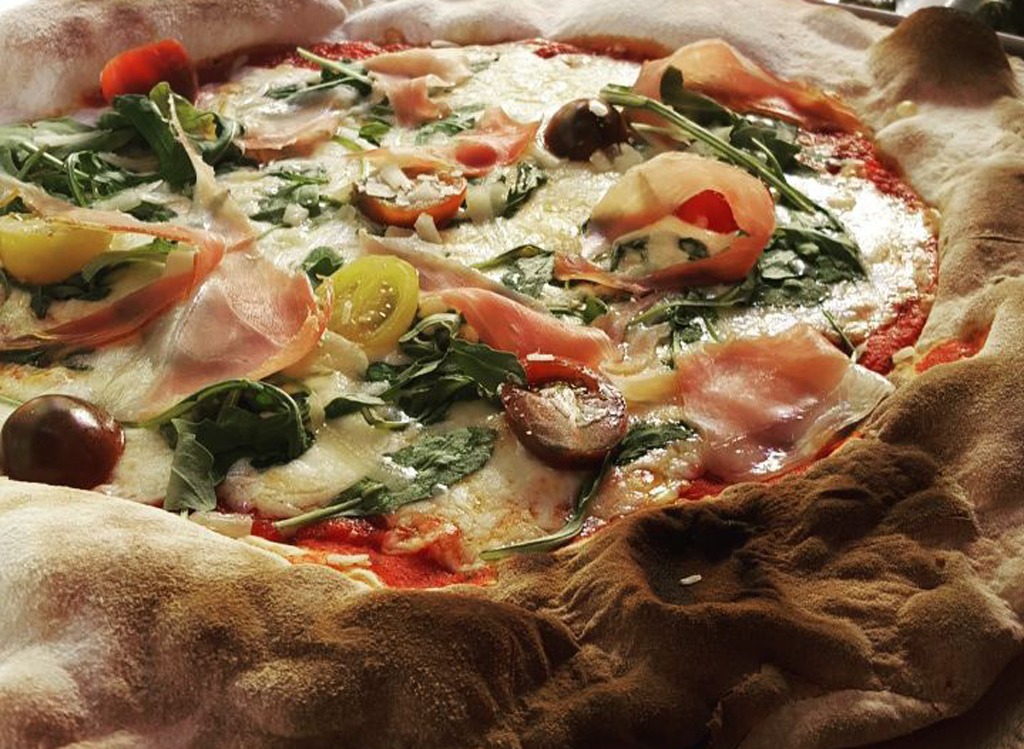 Looks like a beautiful version of you would envision as your cheat meals, sî? Except for nothing about this is a cheat meal—well, at least not for people in Spain it isn't. If you've ever read the book, French Women Don't Get Fat, what I am about to say won't sound as crazy. People in Europe eat full-fat everything and they're thinner as a result of it; this is because the healthy fats from the cheese and meat in this pizza, for example, keep them fuller longer and aren't prone to indulge in extra calories throughout the day.

Since lunch in Spain happens anywhere between 1 p.m. and 4 p.m., and dinner doesn't roll around till 9 p.m. or 10 p.m., it's best to eat something that will satisfy you. I can personally attest to this, too. I remember walking all around the city after this with my BFF because we were so incredibly full. But, oh my gosh it was heavenly!

They Dance Until Sunrise 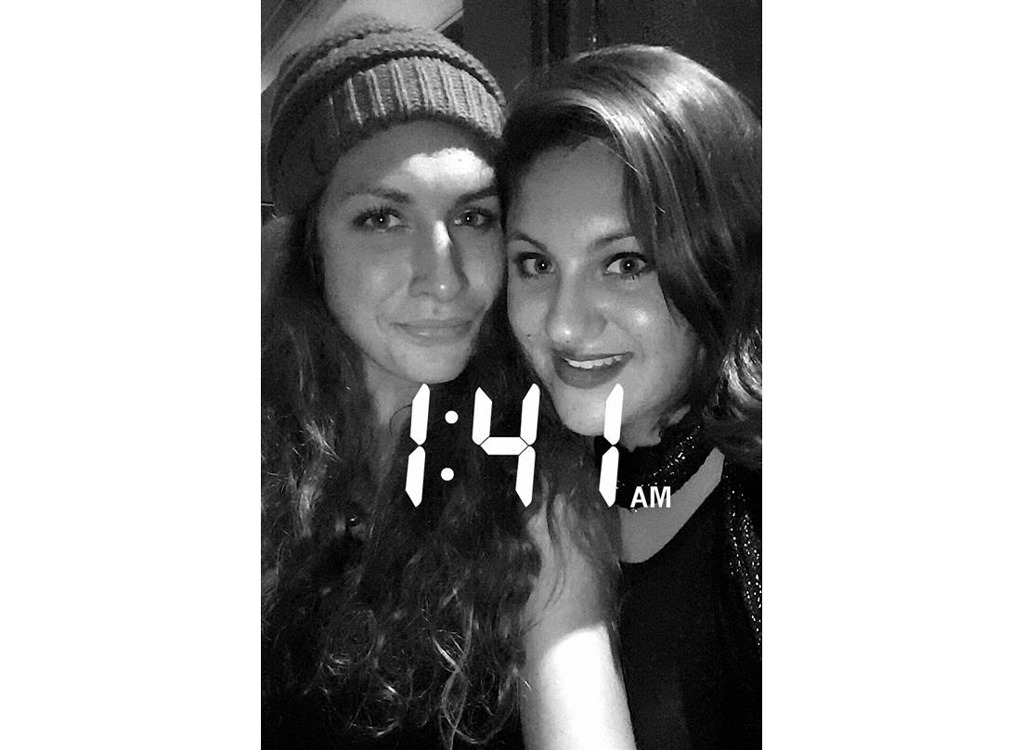 When the Spanish go out on the weekends, they start around midnight and hit the club around 1 or 2am. Some will stay out as early as 6 or 7 a.m. that morning. What are they doing? Well, besides having a few drinks and enjoying one another's company, they are out dancing, shaking off every ounce of tapas, pizza, and chocolate con churros. More importantly, they are living life as it should be lived with minimal stress, good food, and good people. Too sappy for you? Go over there for yourself and you'll get all the feels; trust me. And you'll probably shed a few pounds if you shed your bad habits that make you fat, too!