Trying to Get Pregnant? Avoid These 10 Terrible Foods for Fertility

When it comes to making babies, you need more than just a little bump n' grind.

It's no secret that there's an entire laundry list of foods to avoid once you are pregnant (and what to eat, too!). In fact, trimester-by-trimester eating plans are even included in our upcoming, brand-new book Eat This, Not That! When You're Expecting.

But if you're still at the phase of simply looking to get that bun in the oven, there are a few foods you should steer clear of from the get-go. Numerous studies have found that certain types of food can actually contribute to infertility—not only in women but also for men, too. It is a team effort, after all. So whether you're trying to have a baby now or hope to in the future, avoid these foods that could hinder your hopes. And then when you do conceive, don't miss these 7 Best Expert Tips for When You're Expecting a Baby!

Next time you're crafting that Instagram-worthy salad or tossing together a killer stir fry, lean toward vegetarian sources when choosing a protein. Researchers from the Harvard School of Public Health found that infertility was 39 percent more likely in females who ate the most animal protein. What's more? Those same researchers also found that the women who consumed high amounts of plant-based protein were significantly less likely to encounter problems when trying to conceive. Bookmark these 26 Best Vegetarian Sources of Protein before your next grocery shopping trip! 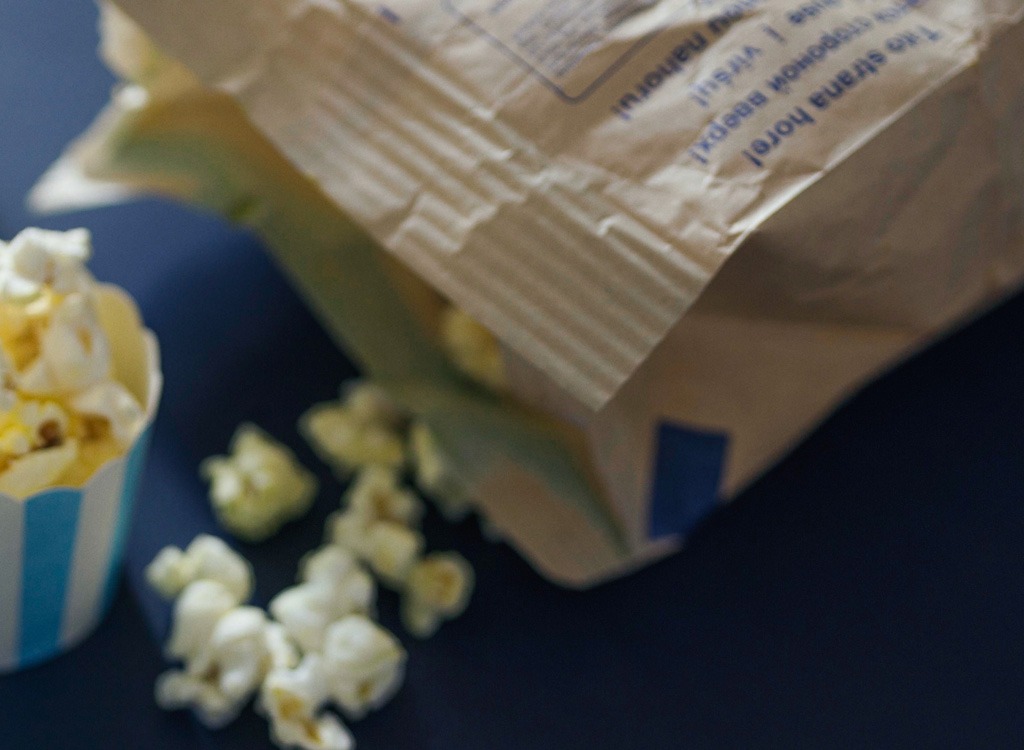 Movie night just got a lot saltier—and not just because you may have overdone it with the shaker. Researchers from UCLA found that women who are exposed to large quantities of a synthetic chemical called perfluorooctanoic acid (PFOA)—frequently used in the linings of microwave popcorn bags—could potentially be at a 70 percent to 134 percent higher risk of infertility. Switch to stove- or air-popped and your movie nights will remain the same, but your time spent rolling in the sheets may actually lead to something more!

While the low-fat versus full-fat debate has been going on for ages, here's another positive push for the full-fat argument: A study published in the journal Human Reproduction found that women who ate high amounts of low-fat dairy were at a whopping 85 percent higher risk of ovulatory infertility versus women who ate little to no low-fat dairy products. This means full-fat yogurt, whole milk, and—yes!—ice cream are on the list of babymaking recommendations.

Although you've probably already nixed them by now, simple and refined carbs (like white bread) are neither good for your waistline nor for your babymaking efforts. Refined carbohydrates digest quickly, causing blood sugar to be unstable and insulin levels to rise, which—according to researchers from the Harvard School of Public Health—may inhibit ovulation. The good news? A simple switch to complex carbs like whole wheat bread and brown rice can help steady your blood sugar and up your chances of conceiving.

It may take a few drinks to get you in the mood, we get it. But honestly, when it comes to getting pregnant, alcohol is best avoided. Women who drink at least one alcoholic beverage per day are at a 50 percent greater risk of ovulatory infertility versus women who drink no alcohol, according to a study published in the journal Epidemiology. Love to imbibe? Check out these 20 Eat This, Not That! Tips for Drinkers for smart swaps!

Head to the ball game, but be sure to skip the Hummel hot dogs when you're looking at the concession foods. According to Harvard University researchers, men who consumed the highest amount of processed meats have an average of 23 percent less normal sperm than men who didn't eat meat-ish things like bologna. Skip the mystery meat and spring for fish like wild salmon instead. Those same researchers found that men who consumed diets rich in omega-3 fatty acids had healthier sperm and 51 percent higher sperm count than those who skipped the fish. The team at Eat This, Not That! is so into fish nutrition that they released an exclusive report that's your ultimate guide for all-things-fishy; check out the 40+ Popular Types of Fish—Ranked for Nutrition!

Whole milk may boost fertility in women, but it seems to have the reverse effect when it comes to men. According to a study published in the journal Human Reproduction, consuming two or more servings of full-fat dairy per day can cause your sperm to slow down and be less motile (active and mobile).

You may have quite a few donut runs in your future when your baby mama's cravings hit, but do yourself a favor and avoid those Krispy Kremes as much as possible until then. Harvard researchers found that men who had high concentrations of trans fats in their semen had a whopping 96 percent less sperm overall than men who avoided the fatty foods.6254a4d1642c605c54bf1cab17d50f1e

RELATED: 50 Best Ever Foods for Men

Organic produce may cost more money, but eating conventional may cost you in other ways. According to research presented at the American Society for Reproductive Medicine Annual Meeting, men who consumed high amounts of pesticide residue from non-organic produce had 64 percent fewer normal sperm and 70 percent fewer motile sperm than men who avoided them.

As if you need any more reason to give soda the boot—research published in the journal Human Reproduction found that men who drank sugary drinks like soda every day experienced decreased sperm motility. It only takes about a can and a half to have an effect, too. Sweetened teas and sports drinks didn't get off scot-free either, so skip the liquid sugar if you want to give your swimmers a fighting chance.