6 "Unhealthy" Foods That Actually Help You Slim Down

Lose weight and trim fat from your middle with these misunderstood dietary no-nos.

No one will ever forget when Justin Bieber egged his neighbor's house and caused $20,000 worth of damage. It's no surprise, really. After someone (or something) has been seen in a negative light, people aren't apt to sway their opinion—no matter how strong the rebranding effort may be. And the reputations of foods are no different. Once something has been dubbed an "unhealthy" or "fattening" choice, many health-minded folks won't think twice before leaving it in the dust. But not all foods deserve their bad reputations! There are a number of nutrient-packed eats that won't pack on the pounds like we once thought. In fact, a number of them can help the scale tip in your favor. Learn the truth about some of these misunderstood foods below, compliments of the New York Times bestseller Zero Belly Diet—and cross them off your "do not eat" list.

Thanks to the popularity of low-carb diets, white potatoes have been unfairly blacklisted. After taking a second look into the science, you'll see there's no need to be scared of the spuds—they're actually powerful hunger tamers that can help you slim down. In an Australian study that measured the satiating index of 38 popular foods, researchers discovered that potatoes were not only more filling and satisfying than dietary demons like doughnuts and cake (no surprise there), they also ranked better than healthy picks like brown rice and oatmeal. As a result, research participants ate less on the days they consumed them. Not to mention, this root vegetable is also a good source of potassium, vitamin C and belly-filling fiber. Ditch high-cal potato toppings like sour cream and bacon bits, and enjoy the spuds with olive oil, rosemary and fresh pepper instead.

While red wine may be known for its heart-protecting properties, it isn't often thought of as a weight loss drink—but maybe it should be. If this sounds too good to be true, stick with us! Purdue University researchers discovered that this shade of wine contains a compound called piceatannol that binds to fat cells' insulin receptors and prevents them from maturing and growing. In short, the booze helps block the growth of new fat cells. If you've been avoiding hitting the bottle all together in an effort to slim down, you may want to considering adding a glass or two of red to your diet. (And if you're looking for a low-cal sip for your next party—or Friday night—try one of the 16 Best Wines for Weight Loss.)

Coconut oil contains more saturated fat than most other cooking fats, which has given it an unwarranted bad rap. Yes, the oil is loaded fat, but it's the medium-chain variety. This kind of fat has little effect on cholesterol levels and converts into energy more readily than other fats, aiding weight loss efforts. Cooking with this trendy oil, a big part of Zero Belly Diet, instead of things like lard or margarine means less flubber is apt to be stored on your frame.

When most people think of popcorn, a giant butter-drenched bucket is often what comes to mind. However, air-popped popcorn made at home without the fat-laden add-ons is actually a low-calorie, fiber-rich, whole-grain snack that can ward off hunger-causing crashes in blood sugar. Don't believe it? Lisa Moskovitz, R.D., founder of The NY Nutrition Group names popcorn as one of her favorite weight-loss snacks. She likes to sprinkle 2 1/2 tablespoons of grated parmesan onto three cups of air-popped plain popcorn to keep her full between meals and ward off cravings for diet-derailing no-nos. For more delicious ideas for satifying your cravings, check our list of the 50 Best Snack Foods for Weight Loss. 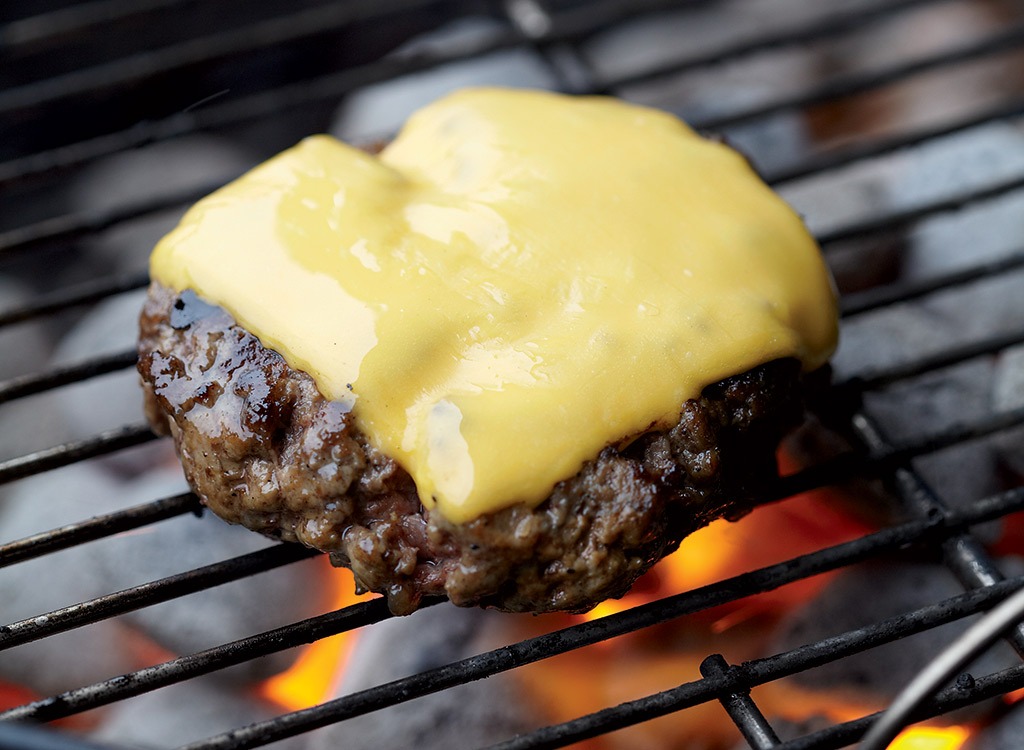 Your favorite burgers may not be the poster child of health, but maybe it should be. (Before you get too excited: No, fast food burgers aren't what we're talking about here.) Why? Red meat, an oft-vilified protein source, is jam-packed with a nutrient that can supercharge your workouts and fry flab: iron. While not getting enough of this nutrient can cause your body to burn fewer calories, getting adequate amounts (adult males need 8 mg/day, women need 18 mg/day) can keep your metabolism humming and boost your energy, allowing you to hit the gym with gusto and sculpt the body you've always wanted. A burger made from 4 ounces of ground beef served with a cup of cooked spinach serves up nearly 10 milligrams of the nutrient. For the best results, look for lean cuts of grass-fed and organic meats, ditch the top bun and have the waiter hold the mayo and fries. (Learn how to craft your own delicious, slimming burger at home with our guide to The Best Burgers for Weight Loss.)

When it comes to eggs, it seems we've been given scrambled messages. Many of us opt for egg whites over whole eggs because word on the street is that the yellow contains too much cholesterol and raises the risk of heart disease. However, new research has found that cholesterol levels in our bodies are impacted by the types of fats in our food, not just the cholesterol content. Not to mention, yolks contain nutrients that may help lower the risk of heart disease, including protein, vitamins B12 and D, folate and riboflavin.

What's more, eating the whole egg can help keep you slim. In fact, they're one of our top fatty foods that will help you lose weight. The yolk contains a nutrient called choline that boosts metabolism and turns off belly-fat genes. If the thought of eating whole eggs still makes you uneasy, try making an omelet with one whole egg, two egg whites and some chopped vegetables.

Eat This, Not That! Editors
Inspired by The New York Times best-selling book series, Eat This, Not That! is a brand that's comprised of an award-winning team of journalists and board-certified experts, doctors, nutritionists, chefs, personal trainers, and dietitians who work together to bring you accurate, timely, informative, and actionable content on food, nutrition, dieting, weight loss, health, wellness, and more. Read more
Filed Under
Unhealthy // Weight Loss Foods // Weight Loss Tips